One pharmaceutical manufacturer minimized operational oversight and gained efficiency and control of its chilled water plant by adding automated controls.

At a $25 million building on a pharmaceutical company’s campus in Research Triangle Park, N.C., the pharmaceutical manufacturer retained a control system 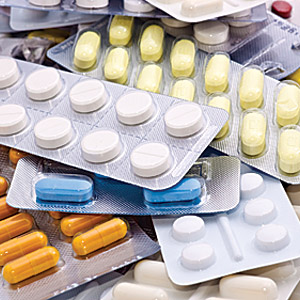 integrator to automate a new central utilities building. The control system integrator, which specializes in industrial process control, built a control package to manage the chilled water, steam and compressed air to all facilities on the campus.

The central utilities building serves an aseptic-filling facility and replaces utility service for an existing oral solid-dose facility. The central utilities building consists of four, 1,500-ton water-cooled centrifugal chillers designed to operate in a redundant (N+1) service arrangement. Each chiller has a dedicated primary pump and pumps chilled water to a system-neutral bridge for distribution. Four pairs of variable-frequency-controlled, secondary chilled water distribution pumps operate in a primary/secondary arrangement to draw chilled water from the supply and distribute it to the various areas of the facility. Control (speed) of the secondary pumps is based on the differential pressure of the loop they serve.

A minimum of two towers is required to serve any single chiller. In addition to the chilled water system, three air compressors are controlled in an N+1 manner to provide compressed air to all facilities. Compressors are loaded and unloaded based on system pressure. Three custom air handlers are installed in the facility to provide conditioning to climate-controlled areas of the plant. Two boilers are installed in the facility to provide plant steam to facility consumers.

The control system integrator designed and installed a redundant Allen-Bradley ControlLogix PLC infrastructure to provide control and staging to all of the equipment. Wonderware System Platform and InTouch were used for the operator interface and to perform specialty noncontrol functions. The system consisted of approximately 300 hard-wired input/outputs (I/O to the ControlLogix PLC and to Turck remote I/O). All hard-wired remote I/O and all variable-frequency drives (VFDs) are connected to the ControlLogix PLC via two Profibus DP networks. Modbus was used to communicate to the onboard chiller controller for both status information and to issue final control commands.

The installed control system stages all chilled water equipment —chillers, towers and tower pumps —based on a chiller demand and capacity scheme. The system continuously calculates capacity based on the number of chillers and an efficiency factor assigned to each chiller. Chiller load is calculated continuously based on supply and return chilled water temperature and flow. Finally, demand is determined using the calculated load and factoring in setpoint reset adjustment, a function of temperature setpoint, supply temperature and flow.

As the demand exceeds the capacity, equipment is staged up. Conversely, as the demand drops below the current capacity, equipment is staged down. When the system is required to stage up, the control system evaluates units that are available for service based on their service status (online/offline) and their run-hour status. The control system calculates run-hour times — both current and total — for all components on the system for maintenance and staging purposes (run-hour balancing). As the system is staged up, the component (chillers, pumps, towers, etc.) with the lowest run-hour balance is brought on first.

The system is designed to allow the operator to select staging based on run time or to hard select the order for each component. The system also permits the operator to take any piece of equipment out of service or place it back in service while the system is in operation. The staging system automatically adjusts to equipment being brought in and out of service or being placed into a manual mode. All parameters that control staging of the system are available at the user interface, including delays, setpoints, staging orders and other data points.

The ControlLogix system was designed using add-on instructions that will accommodate expanding the system to up to eight chillers (and associated towers, pumps, etc.) without modification to the staging mechanics, which is planned for the facility in the future. It should be noted that the staging mechanics programmed in the add-on instructions are generic (based on “units,” not specific equipment types), allowing the scheme to be applied to any scenario requiring staging of subordinate components.

The control system and facility were successfully placed into operation and now provide chilled water, steam and compressed air to all facilities on the campus, with lower overall energy usage predicted. Furthermore, the control room is unstaffed, signifying the reliability of the equipment and success of the automation system in controlling the plant without operator intervention.

Web Exclusive: What is a Control System Integrator?