With the theme “Green Economy with Natural Refrigerants,” the eurammon symposium showcased the potential of natural refrigerants. International speakers at the lecture event presented new developments and current trends in refrigeration technology to almost 70 participants. eurammon, a joint European initiative of companies, institutions and individuals who advocate an increased use of natural refrigerants, is based in Frankfurt, Germany. 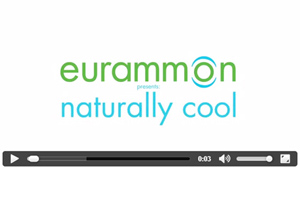 Beat Schuppisser, from Johnson Controls, explained how carbon emissions were reduced by 790 metric tons and natural gas consumption was reduced by 500,000 m3 using a combination of a refrigeration system and a heat pump. He presented a case study from the Kellermann Co., a Swiss agricultural enterprise and food producer that covers the entire production chain – from growing food to industrial processing. To become more environmentally friendly in the way it refrigerates and heats, Kellermann replaced its gas boiler with a heat pump and built a new 1,000 kW ammonia refrigeration system. The combination of refrigeration system and heat pump allows waste heat to be used for heating, which saves energy.

Bruce Nelson, president of Colmac Coil Inc., presented another solution for consuming less energy and reducing carbon emissions: direct expansion. He gave an example of a direct expansion ammonia refrigeration system at a large frozen food supplier in Australia that replaced the previous system that used R404a. The technology reduced the ammonia charge to only 20 kg. In contrast, a comparable application without direct expansion would require 600 kg of ammonia. The system reduces annual carbon emissions by around 60 percent and energy consumption by 61 percent, resulting in a payoff after just three to four years.

Wanted: Academic Theses in the Field of Natural Refrigerants

Tax Incentives Encourage the Use of Natural Refrigerants