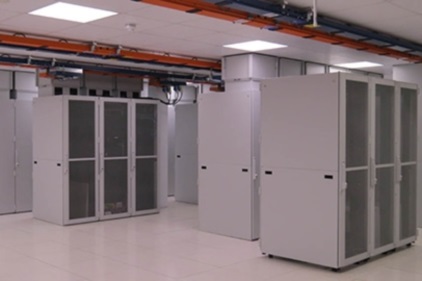 After research Rittal’s roof-mounted chimney module, Datum specified a one-piece duct assembly on top of the TS IT enclosure for airflow management. The enclosure cooling device was found to work with the patented ecofris cooling solution from Keysource. A passive system that does not require fans or electrical connections, the chimney module permits the hot and cold air to be separated efficiently. It thereby eliminates the hot aisle because the exhausted heat is contained within the chimney system.

Utilizing the chimney modules allowed the cooling system in the room to work to its’ full potential, delivering a PUE of 1.2 or less, achievable even with a partial load, according to Rittal.