This website requires certain cookies to work and uses other cookies to help you have the best experience. By visiting this website, certain cookies have already been set, which you may delete and block. By closing this message or continuing to use our site, you agree to the use of cookies. Visit our updated privacy and cookie policy to learn more.
Home » Evaporative Coolers with Dry Capability Broaden the Mechanical Landscape
Air CoolingWater CoolingCooling TowersAll Process Industries
Evaporative Coolers

As aging facilities are tapped to accommodate expanded manufacturing and broader process applications, facility owners and managers are faced with vexing challenges. Primary among them is how to meet these demands within realistic budget parameters.

Adding to the difficulty is the perennial cry to reduce energy use and water consumption — often two of the largest budget items for facility managers. To magnify the challenge, some municipalities have set water-use restrictions for plants, creating an unexpected burden. Another facet of the challenge of doing more with less is the common problem of deteriorating mechanical infrastructure with footprints that may be difficult or impossible to expand.

Often, even when facility managers or owners are ready to invest in new mechanical systems, roadblocks such as restrictions on water use or closed-circuit cooler footprints limit what they can do.

Fortunately, manufacturers have stepped up to the plate, offering solutions that reduce evaporative cooling system size. The new systems improve and expand capability while reducing energy use and water consumption. Technology that enables this includes enhanced spiral-finned coil designs and adaptive controls. They maximize the water and energy efficiency of a cooling system by controlling equipment operation based on real-time load demands and ambient conditions.

Typically, upfront investment for the equipment is higher, yet the rewards are substantial. These are chiefly achieved through improved reliability, energy efficiency and water-use reduction.

To improve water and energy savings, hybrid closed-circuit evaporative coolers offer both evaporative and dry cooling simultaneously. In total, there are three modes of operation: evaporative, dry and water efficient (simultaneous wet/dry). This technology’s simultaneous wet/dry mode allows a portion of the heat load to be rejected through both evaporative cooling and dry cooling even at high ambient temperatures. It is an operation mode that also reduces water makeup, blowdown and chemical consumption. Combined with nonchemical water treatment, facility managers employing such systems may be able to eliminate the use of chemicals for system water.

Through the years, there has been an emphasis for water-use reduction, especially in those areas of the world affected by drought conditions. There is no doubt that concerns about these conditions are expanding globally. Water scarcity concerns will help position these technologies as steadily more viable.

Given water scarcity concerns, most applications should determine whether hybrid systems — or systems offering full, dry cooling capability — can have a role. Whether for a retrofit or new system design, it is important to design the cooling systems around the capability when it can be accommodated. Factoring in a facility’s location, ambient conditions and cooling load, calculations will show whether or not the technology can meet the need.

Among the improvements are controls with adaptive logic that manages unit performance based on real-time load and ambient conditions. As load requirements are reduced, the dry-bulb switchover temperature — the point at which equipment can provide dry cooling — increases. This means the same coil surface area rejects a smaller load. This has a significant impact on system efficiency.

Also, staging pump controls for multi-cell/module installations can reduce water and energy consumption. They do so by increasing the operation hours where partial dry cooling can be used.

The technology is becoming more applicable as recent changes and improvements to systems and application techniques have proven their value. If dry capability is found not to be suitable to a facility’s need, be sure to get a second opinion. 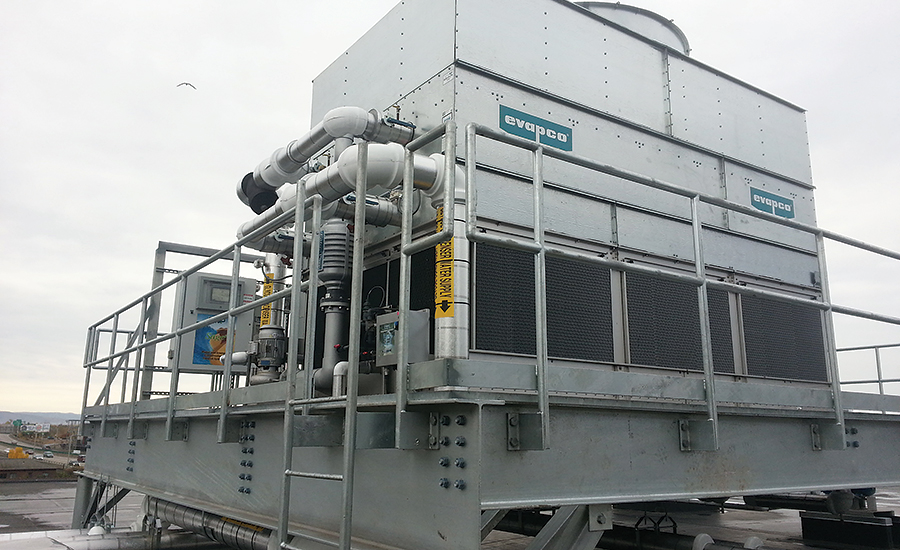 Illustrative of this are recent renovations at a Philadelphia facility. Initially, the plant was served by four 250-ton forced-draft cooling towers (total of 1,000 tons) and a bank of cast-iron modular gas-fired boilers. The need for an energy retrofit was the perfect opportunity to consider return on investment in new technology. 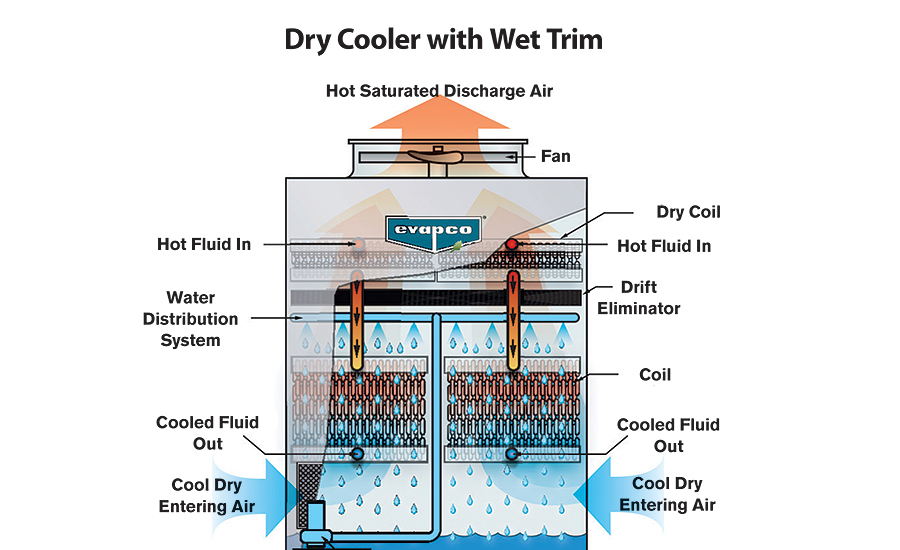 The evaporative mode principle of operation for a hybrid unit module with a dry coil piped in series with extended surface fin coil for maximum water savings and plume abatement is depicted here.

According to Casey Younkins, P.E., a sales engineer with Kennett Square-based manufacturer’s representative firm Energy Transfer Solutions, many of the old system components functioned as originally intended. However, a steady decline in energy performance and sharp increases in the cost of water contributed to erosion of the owner’s bottom line.

“Through the years, the old towers and boilers were having difficulty meeting the peak demand,” said David B. Parmiter, P.E., at Philadelphia-based Urban Engineers Inc. “The challenge was to not just replace the equipment but to improve performance while also reducing energy consumption. The owners were concerned about the escalating cost of utilities, including — and especially — the cost of domestic water,” Parmiter.

The original, closed-circuit cooling towers were consuming large amounts of water through evaporation, according to Parmiter. Also, even after several repairs and modifications to the coolers, the boilers were unable to maintain loop temperatures for cold morning startups.

Parmiter led the effort to engineer retrofit solutions for the facility that included options for replacing the towers, the boilers and optimizing control of the system.

Prior to starting the project, owners made the decision to invest in the property by using technology that gave them the best return over the life of the equipment. They selected features that would reduce water use, chemicals, power consumption and maintenance expense.

According to Younkins, the owner’s directive to the system design team was threefold: prioritize energy efficiency and water reduction, minimize maintenance and streamline water treatment.

“Facility managers asked us to explore ‘responsible’ ways to replace equipment,” said Parmiter. The owners were most receptive to solutions that provided high efficiency operation and long equipment life expectancy.

“We could offer a way to greatly simplify their water treatment (and water waste), although it bore a cost,” added Younkins. “Yet, the advantages of reducing maintenance and saving a large volume of water were compelling.”

The owners also had real appreciation for the fact that one firm could provide single-source manufacturing of the cooling towers, the control system and water treatment — a combination that also reduced water usage.

Parmiter’s recommendation called for replacement of the existing forced-draft coolers with induced-draft closed circuit coolers, controls to optimize operation of the entire mechanical system and water treatment. Parmiter and Younkins specified two closed-circuilt cooling towers that would provide the most tower capacity while staying within the size and weight limitations of the existing support structure. The design included minor support modifications to allow the towers to be positioned with full service platforms.

The coolers would reduce the total connected fan motor horsepower from 160 hp down to 60 hp — a 60 percent reduction in energy for the fans alone. The savings were associated with using spiral finned coil technology and coupled with a control system designed by the maker of the closed-circuit coolers specifically for such installations. The new coils also required a 40 percent smaller footprint. This allowed them to replace the facility’s four existing centrifugal fan units with just two of new units.

To improve water and energy savings, the new coolers offer both evaporative and dry cooling simultaneously and three modes of operation: evaporative, dry, and water efficient (simultaneous wet/dry). The technology’s simultaneous wet/dry mode allows a portion of the heat load to be rejected through both evaporative cooling and dry cooling, even at high ambient temperatures. The operation mode reduces water makeup, blowdown and chemical consumption. Combined with nonchemical water treatment, facility managers were able to eliminate the use of chemicals for the coolers.

The owner’s energy savings expectations were exceeded when an energy analysis showed a dry-bulb switchover temperature of just under 60°F (15°C). This meant that each unit would be able to operate in water-efficient mode 48 percent of the year, reducing water consumption significantly. 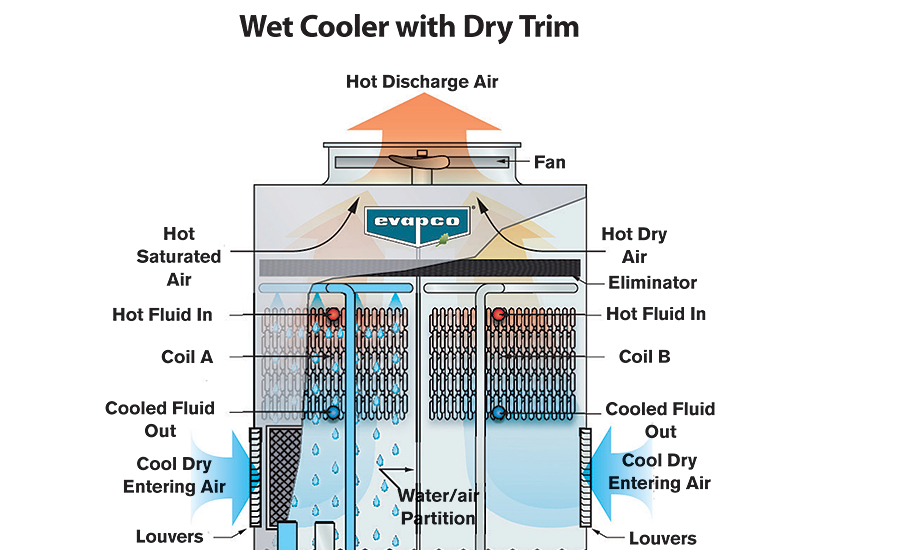 The evaporative mode principle of operation for a hybrid extended surface fin coil is capable of providing simultaneous wet dry operation within a single cell for enhanced water and energy efficiency.

Following system installations, the building owners have experienced cost savings through improved energy and water efficiency. “There’s been fantastic improvement in system performance,” said Jablokov. “Engineering the right cooler size has allowed us to maintain an optimal 85 degree loop temp.” Parmiter added, “We also discovered that connecting small air-conditioning units to the side of the fan motor VFD enclosures — rather than using ventilation fans — made a huge improvement in protecting electronics from humid, dirty air.”

Initially, the owners were projected to save an average of 15,338 kWh per month over the old evaporative coolers. Those improvements would have equated to a 75 percent savings in total energy use and cost after one year. It also was projected that the facility owners would save an average of 96,260 gal of water each month, resulting in a 24 percent savings in water use and cost after one year. When factored together, the customer would save an estimated total of $24,750 per year. These were the numbers — giving credence to an investment in new technology — that won the job for Parmiter’s recommendations.

Now, 50 months after completing the retrofit at the facility, Parmiter learned from managers of the facility, who have tracked energy/utility performance rigorously, that the systems have saved almost $25,000/year in electrical costs alone.

Matthew M. Shank is a product application manager for the industrial process market with Evapco. The Westminster, Md.-based company can be reached at 410-756-2600 or visit  www.evapco.com.

How to Perform Mechanical-Integrity Inspections of Air Coolers