This website requires certain cookies to work and uses other cookies to help you have the best experience. By visiting this website, certain cookies have already been set, which you may delete and block. By closing this message or continuing to use our site, you agree to the use of cookies. Visit our updated privacy and cookie policy to learn more.
Home » Insights into Advanced Steam Turbine Centrifugal Chiller Technology
ChillersRefrigeration SystemsAll Process IndustriesPower Plants
Chillers

In a combined heat and power system, the energy utilization is two to three times better than conventional power generation. This helps the facility shrink its carbon footprint substantially.

Integrating steam-turbine-driven chillers in an on-site combined heat and power system is a positive solution for rising electricity costs and environmental issues. Within the combined heat and power segment, the steam source can be from an on-site boiler or a utility steam loop. Boilers sized for winter heating can be put to work efficiently year-round when used to generate steam for summer cooling.

Steam-turbine-driven chillers are centrifugal vapor-compression chillers, using steam as the motive energy. The basic components are similar to an electric centrifugal vapor-compression chiller: namely, the evaporator, refrigerant condenser, compressor and the refrigerant metering device. The steam turbine provides the rotational power to drive the chiller instead of the typical electricity-driven motor. In addition, there is a steam (surface) condenser for a condensing-type steam turbine. These components must be properly combined and matched to ensure the lowest steam rate.

TABLE 1. The full-load coefficient of performance — the measure of efficiency for a steam-turbine-driven chiller — is approximately 1.2, or almost the same as that of a two-stage absorption chiller. The off-design performance of the same chiller can be as high as 2.0.

In the case of a condensing steam turbine, the steam (surface) condenser is employed to condense exhaust steam at vacuum pressures to maintain efficient turbine operation. The steam condenser water circuit usually is piped in series with the refrigerant condenser, eliminating a separate cooling-water circuit. The typical condenser water flow rate is 3 gal/min/ton, compared to 4 gal/min/ton for an absorption chiller.

The steam pressure at the inlet of the turbine can range from 13 psig to as high as 400 psig, dry and saturated or even superheated, up to 600°F (315°C). Typical inlet steam pressure is 125 to 150 psig with an exhaust pressure of 2.75” HgA (steam condensing pressure at approximately 2.8” HgA). The flexibility to handle higher steam pressures and temperatures, or even superheated steam, is an advantage over an absorption chiller. Absorption chillers typically are limited by 150 psig pressure, dry and saturated steam.

The steam turbine is a multi-stage design with a nominal speed of 4,500 rpm. The turbine blades and nozzles are of stainless steel grade. The turbine speed is controlled by a governor valve, integrated with the chiller controls. During part-load operation at off-design conditions, the chiller capacity is reduced to maintain a constant leaving-chiller liquid temperature. This is accomplished by first decreasing the speed and then closing the compressor prerotation vanes (PRV). This reduces capacity from 100 percent to 15 percent of design. The speed is controlled by a pneumatically actuated governor valve that throttles the turbine inlet steam flow to maintain the speed dictated by the capacity control logic. With hot gas bypass, the chiller can be unloaded down to 10 percent of design.

TABLE 2. For base-loaded cooling applications, if entering-condenser-water temperature (ECWT) is allowed to drop to 55°F, the chiller capacity may improve by almost 23 percent. This capacity improvement may allow another small electrical chiller to be potentially shut off in the plant room, thereby reducing operational costs.

A steam turbine chiller is engineered to take advantage of the steam turbine’s inherent variable-speed capability to optimize chiller speed and to handle low entering-condenser-water temperatures. These features help allow the chiller to operate at the highest efficiency. The ability of a steam turbine to vary rotational speed helps ensure optimal compressor efficiency at all operating conditions.

This chart compares the dimensions and operating weights between steam turbine and absorption chiller technologies.

It is important to design the chiller in such a way that it can be operated with low entering-condenser-water temperatures — as low as 55°F (13°C) — with full refrigerant condenser water flow rates at all design points. This improves the chiller efficiency and benefits the operation of the cooling tower by reducing the cycling of the fan motor and ensuring good coverage of the cooling fill. Two-stage absorption chillers generally are limited with an entering-condenser-water temperature of 68°F (20°C) due to concerns of crystallization of the lithium bromide solution.

The design (full-load) coefficient of performance (COP) — the measure of efficiency for a steam turbine chiller — is approximately 1.2. That value is almost the same as that of a two-stage (double-effect) absorption chiller. However, the off-design performance of a steam-turbine-driven chiller, as measured by integrated part-load value (IPLV) or non-standard part load value (NPLV), can be as high as 2.0, compared to approximately 1.5 to 1.6 for an absorber (table 1).

Due to the off-design efficiency of a steam-turbine-driven chiller, the saved steam can be used for other applications in the facility, thereby reducing use of the primary energy fuel. As an example, a 2,800 ton steam turbine chiller has a design steam rate of approximately 8.6 lb/hr/ton at full-load conditions. At off-design conditions, it may be as low as 5.7 lb/hr/ton. The off-design efficiency — translating directly into annual steam savings and operational costs — also can help justify the higher initial capital cost of a steam-turbine-driven chiller compared to an absorption chiller.

For base-loaded cooling applications, if the entering-condenser-water temperature (ECWT) is allowed to drop to 55°F (13°C), the chiller capacity may improve by almost 23 percent (table 2). This capacity improvement may allow another small electrical chiller to be potentially shut off in the plant room, thereby further reducing operational costs.

In case of larger cooling capacities — typically 1,500 tons and above — an absorption chiller may have to be shipped in multiple pieces requiring field assembly, on-site welding and leak checking to ensure leak tightness on the shell side. This requires more care at the jobsite in terms of welding and leak-checking practices and techniques. 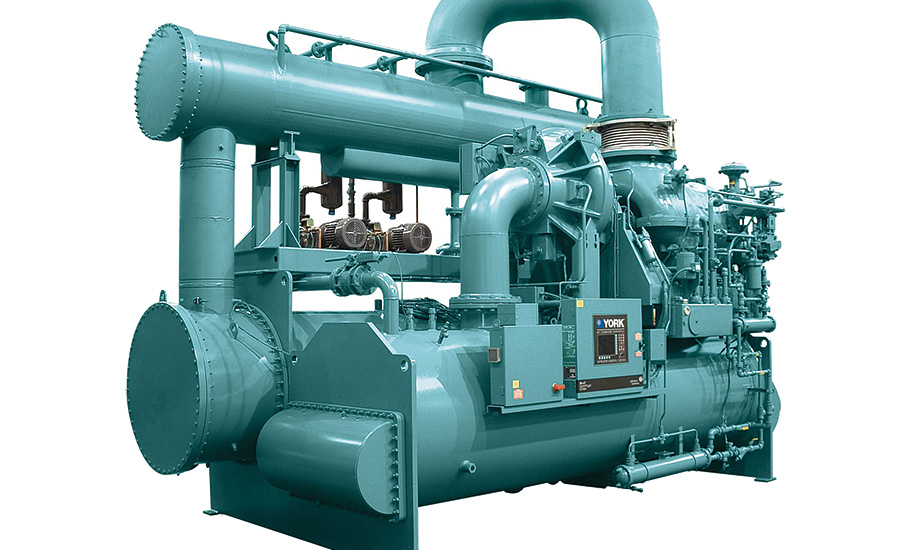 Steam turbine driven chillers have been around for almost a century. Now with a stable supply of low-cost natural gas in the United States, they are becoming a very popular choice particularly for large combined heat and power (CHP) applications. Steam turbine chillers are also attractive when the cost of steam is relatively low compared to the cost of electricity.

By contrast, a steam-turbine-driven chiller is shipped in one piece, with the exception of the steam condenser, which may be shipped directly to the job site. The assembly required in the field is restricted to the water/steam circuits, thus ensuring hermetic integrity of the refrigerant circuit from the factory remains intact.

Modern steam turbine chillers are equipped with sophisticated controls, including fully automatic start, which eases operation and eliminates manual procedures to start/stop the chiller. Another advantage of the steam turbine chiller is the ability to be adapted to a variable primary flow system. Steam turbine chillers can handle variable flow rates through the evaporator tube bundle, something that many absorption chiller manufacturers may not prefer.

Steam turbines offer reliability and long life. Of course, maintaining steam quality is important to successful operation. It is recommended that startup, maintenance and repairs are handled by factory-trained service technicians. Periodic inspection and overhaul of the steam turbine generally is handled by the steam turbine manufacturer.

In conclusion, steam-turbine centrifugal chillers offer relatively low maintenance, highly reliable operation and long service life. They offer a smart alternative for combined heat and power and other demanding applications — those ranging from 600 to 2,800 tons (or even 5,500 tons), wherever steam at medium-to-high pressure is available.

Chemical, pharmaceutical, paper and textile industries can benefit from steam-turbine drive cooling as well as CHP plants. These applications also benefit from the reduced annual operational costs and the ability to achieve greenhouse gas reduction targets. Moreover, some utility companies offer rebates and incentives for deploying steam turbine chillers. The off-design performance along with design and operational flexibility help provide a faster economic payback on the investment.