How to Meet IIAR Standards for Ammonia Pipe Marking

For safe operations and maintenance, it is important employees know what is inside the pipes they are working around to prevent accidental exposure to hazards. If the contents in a pipe may be hazardous, that information should be clearly communicated as a matter of human safety.

Recently, a multinational American corporation in the food industry agreed to pay a civil penalty of $3.95 million for eight separate incidents that occurred over the span of four years. The accidents were due to the accidental release of dangerous levels of anhydrous ammonia in several facilities, causing property damage, multiple injuries and one fatality.

Ammonia refrigeration facilities have higher accident rates than other processes, says the U.S. Environmental Protection Agency (EPA). This fact puts a major focus on ensuring safety practices are in place to protect employees, first responders and communities located near processing facilities from the threat of chemical releases. Fortunately, there are accident prevention steps and systems that facilities can implement to keep workers safe and aware of the presence of ammonia.

For the period of 1999 to 2008, ammonia is number two chemical — among the top five chemicals — associated with injury, according to the Centers for Disease Control (CDC). The presence of ammonia can cause harmful health effects ranging from irritation to severe respiratory injuries and even death at higher concentrations.

To improve the safety of ammonia refrigeration piping and system components, the International Institute of Ammonia Refrigeration (IIAR) has a guideline for labeling them: Bulletin No. 114. The purpose and requirements stem from ANSI/ASME A13.1 to provide consistency with general pipe-marking standards.

Compliance with IIAR 114 will ensure the pipe marking is effective. 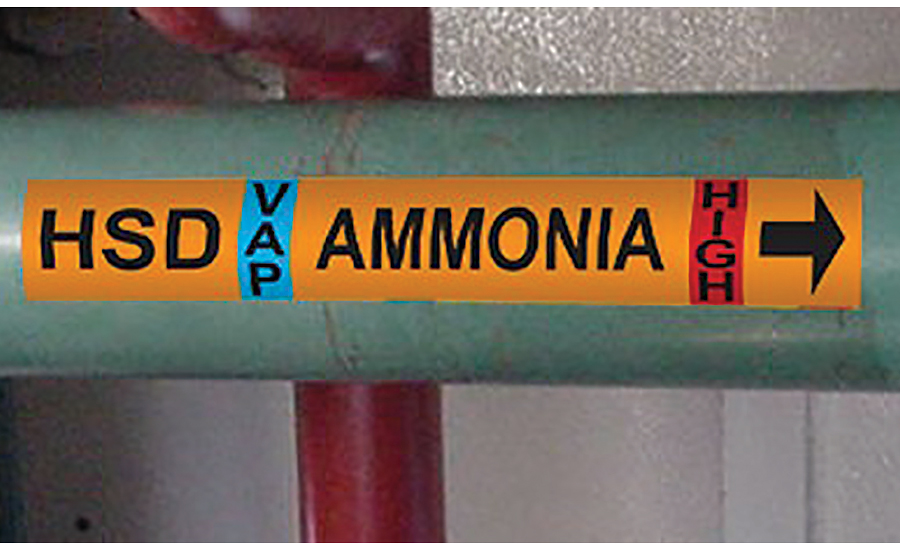 Among the elements required by the five-part ammonia pipe marking standard is the direction of flow via a directional arrow.

How to Make an Ammonia Pipe-Marking Label

Five-Part Ammonia Label. The label that goes on the pipe itself consists of five parts:

Two-Part System Component Label. In addition to five-part pipe labels, each piece of equipment in an ammonia refrigeration system also may be labeled. This label consists of two sections:

Include a reference chart that fully explains the ammonia refrigeration piping and component identification markers, including piping abbreviations, in areas where people can see them.

In addition to the labels themselves, IIAR also suggests a piping color scheme to help aid in training and safety efforts. A color-coding system can help make pipes and pressure-relief valves quicker to identify, and they can help improve response time in an emergency situation. The colors may be applied using paint over the length of the pipe or as bands of color. When implementing a piping color-code system, post a legend or key to describe the color scheme in place where personnel can easily see it. 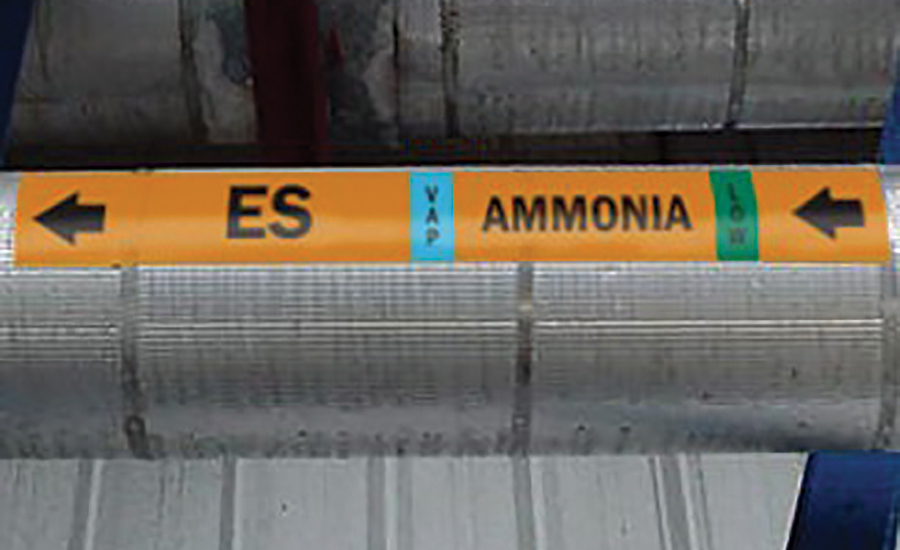 Piping abbreviations are used to identify the pipe’s role in the ammonia refrigeration system.

A pipe-marking system is about more than just meeting regulatory requirements. It also helps to strengthen an overall safety program.

The safety of piping systems is a concern in facilities worldwide. This is why a broad, voluntary general pipe-marking standard was created in Canada by the Canadian General Standards Board (CGSB): CAN/CGSB 24.3-92. In June 2016, however, the governmental organization withdrew the archaic standard originally established in 1992. The label guidelines are similar to ANSI A13.1:

Canadian workplaces may follow ANSI A13.1 and IIAR ammonia pipe-marking standards as a guideline for a holistic pipe-marking system. Having some kind of pipe-marking system in place will help increase overall safety, reduce the chances of error, simplify emergency procedures and minimize hazards.

To help accomplish all of your ammonia pipe-labeling tasks, consider an ammonia pipe-marking kit. Some pipe-marking suppliers offer technologies with durable supplies to mass produce custom pipe-marking labels for your entire facility. Ready-made pipe markers are available as well. Another alternative is to simplify the labeling process with preinstalled label design software that comes on many industrial label and sign printers. Whatever you choose, be sure the labels are made to endure their environment and are engineered to resist fading from UV light, moisture and most chemicals.