Named Fabricator of the Year for 2018, BTD Manufacturing has been growing steadily since it started out as Bismarck Tool and Die back in 1979. Over the years, it has acquired several companies and expanded its repertoire of custom services. One of those companies was Impulse Manufacturing in Dawsonville, Ga., which joined the BTD team in 2015.

When BTD purchased Impulse Manufacturing, it acquired a full-service metal fabricator with a history that included early adoption of new technologies. BTD also was long committed to establishing efficient, effective practices to serve its clients, which include names like Caterpillar and Polaris.

About five years ago, Impulse added a new paint line. They soon realized it had a problem: After leaving the oven, the parts did not have enough time to cool as they traveled down the conveyor. They were still too hot to handle when they reached the end. Workers often had to stop the production process and wait for the parts to reach a manageable temperature. This created a significant bottleneck and constrained capacity and productivity. Compounding the problem was the fact that sending hot parts into the paint booth created wasteful paint buildup, increasing the company’s raw-material costs.

To restore the line to peak capacity and efficiency, the company needed a way to cool parts on the line without costly facility improvements. After considering some solutions that failed to yield the desired results, the facility’s general manager consulted an industrial fan manufacturer. The team there considered the problem and came up with a different recommendation for cooling the parts based on a scientific understanding of the cooling process.

Back to Basics: Heat Transfer 101

In a long-ago physics class, you likely learned that “cold” does not exist. Instead, what we perceive as cold is merely the absence of heat, which is an effect of molecular kinetic energy.

Heat always takes the path of least resistance from high energy to low energy. It transfers between different materials — whether solid, liquid or gas — at different rates until an equilibrium is achieved, and the materials are the same temperature. To use a real-world example, a mug of hot cocoa on a countertop will keep cooling down until it becomes room-temperature cocoa. This heat transfer of energy from high temperature to low temperature is what drives the cooling process.

“Heat” is an objective measure of molecular energy, but “hot” is a relative term. To humans, a space with an air temperature of 100°F (38°C) and no breeze feels unbearably hot. But to a metal part coming out of an oven at 350°F (177°C), 100°F is relatively freezing. If the 350°F part were left sitting in a 100°F room, it would slowly cool as its heat transferred from its surface to the cooler surrounding air. This process is known as natural convection. 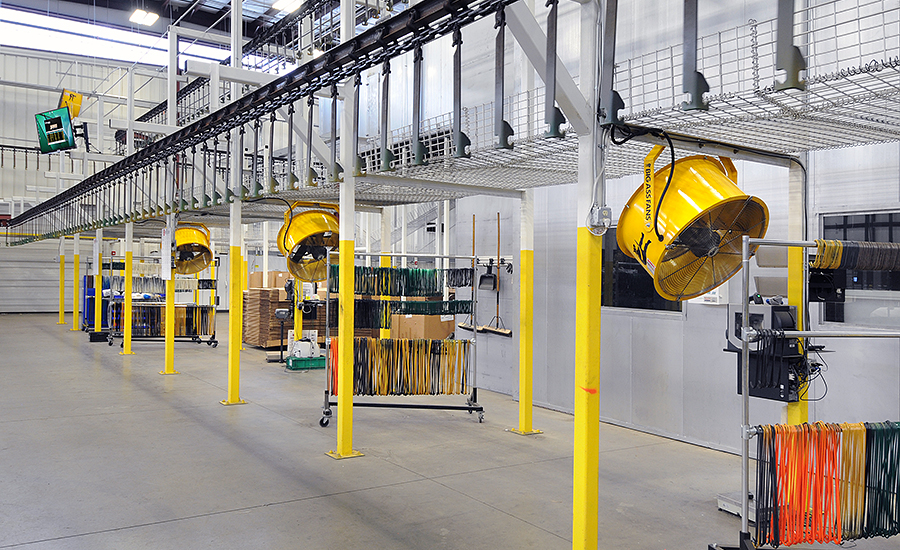 Using overhead or directional fans to speed up the process can be an effective, energy-efficient way to get products to an appropriate temperature for downstream processes quickly.

The rate and extent to which an object’s temperature can drop via convection depend on several factors. One of the most influential is the temperature of the surrounding air. The greater the temperature difference — known in the heat transfer world as delta T, or ΔT — between an object and its immediate surroundings, the faster the rate of heat transfer. That is why if we want our mug of cocoa (or can of beer) to cool faster, we stick it in the freezer.

Lowering the temperature of the surrounding air might bring to mind adding an expensive climate control system. But, there is another way.

Back to Basics: Airflow 101

We all know that airflow can help cool objects and people. That is why we blow on that steaming mug of cocoa before taking a sip. Most of the time, however, we do not give much thought to how it all works.

As an object cools, its heat dissipates and warms the air around it. With every cooling object, whether it is a cup of coffee, a metabolizing human body or a freshly baked tractor part, this dissipated heat forms a layer of warmer air around the object. This insulating boundary layer leads to a reduced temperature difference between the object and its immediately surrounding air. This boundary layer makes natural convection less effective and slows the cooling process. 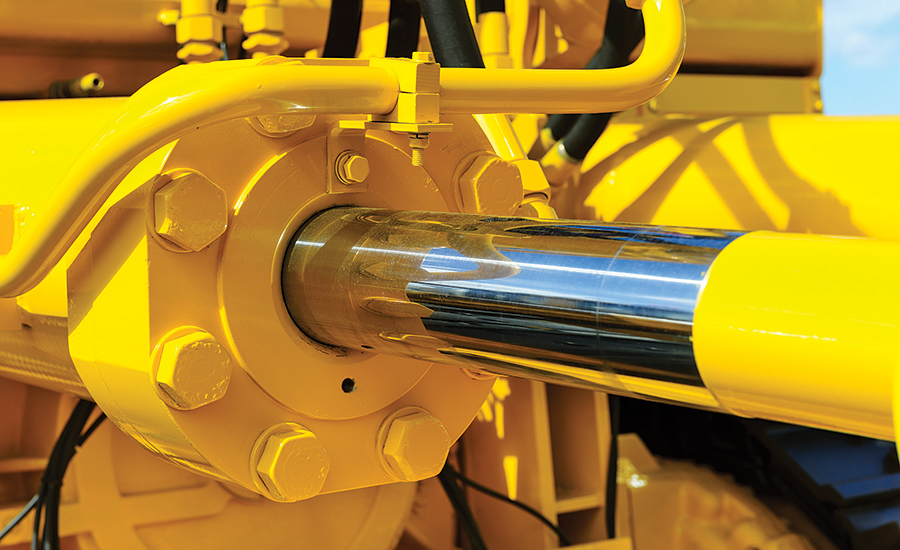 A durable paint finish is required for heavy equipment such as tractors, bulldozers and excavators.

Airflow helps accelerate cooling by blowing away this boundary layer and bringing the object back into contact with the cooler, ambient air, in a process known as forced convection. (This same forced convection is responsible for the “wind-chill factor,” which is your body-heated layer of air that is being blown away, resulting in perceived colder conditions.) The faster the air speed, the less time the boundary layer has to build up. Heat is continuously flowing out of the object and thus must be continuously blown away from the boundary layer.

A fan company’s applications engineers should be able to calculate the required average air speed (typically expressed in feet per minute or meters per second) to adequately cool an object. The calculation can be customized for any facility based on the following conditions:

Knowing the exact air speeds a fan can deliver at different points within its coverage area (known as its air-velocity profile, or AVP), fan company applications engineers can design a layout with the optimal fan quantity. Such a layout incorporates aiming angle and mounting locations to supply the required air speed to the products on the cooling line. The calculated average air speed requirements and fan AVP are what should ultimately determine the fan layout recommendation for any successful process cooling application.

Back on the Georgia Line

When the facility manager at BTD’s Georgia plant went to an industrial fan manufacturer for help cooling products on his paint line, he was under the impression that he needed to select fans based on the cubic feet per minute (cfm) rating. While the rating serves as a standard measurement for fan airflow quantity, it says nothing about the path and coverage area of the airflow, or the actual speed of the air at different distances.

In any application, it does not matter how much total air a fan produces if it is not supplying the required air speeds to the required locations. (Likewise, a sprinkler and a pressure washer use the same amount of water to achieve completely different results.) Similarly, different fan models deliver varying air speeds across their range of coverage. That is why it is so important for a fan company to be equipped to measure the AVP of its products.

The Georgia facility manager was told he needed fans with an AVP that would deliver enough high velocity air directly over the parts. The fan company recommended installing several 30” high velocity barrel fans, positioned with directional flexibility at 20’ intervals, less than 10’ from the parts on the conveyor. With such a layout, the heated parts would be exposed to the highest-velocity air every time they passed through a fan’s coverage area. Thus, the fewest number of fans would be required to achieve the intended effect. 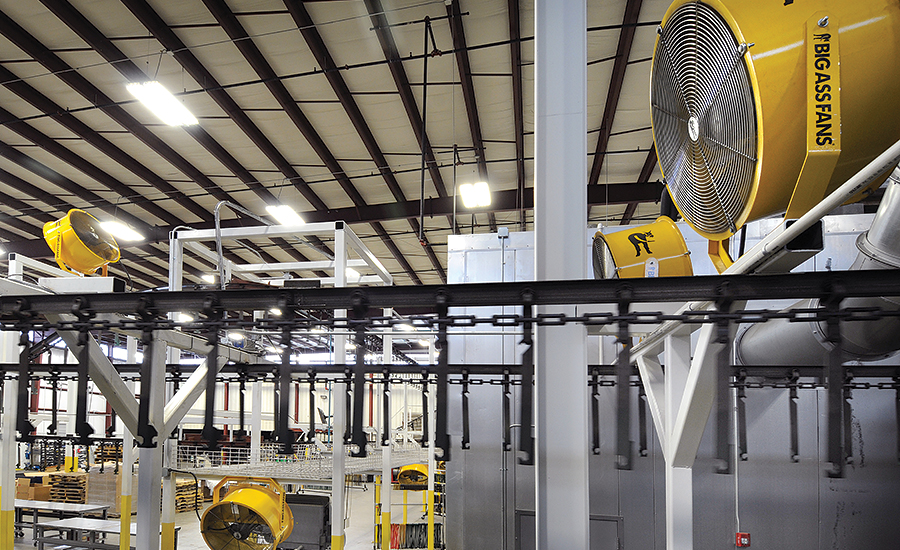 Several 30” barrel fans, precisely positioned at 20’ intervals, were installed less than 10’ away from the parts moving on the conveyor at the facility in Georgia.

The new fan layout lowered the temperature of BTD’s parts from 165 to under 100°F, allowing for comfortable handling at the end of the cooling process. Additionally, fans installed between the dehydration and paint ovens cooled the parts enough to reduce excess paint buildup by 50 percent. Adding the fans allowed BTD to avoid more-costly alternatives such as installing conveyor extensions or a climate-control system. According to the company, the fans provided an effective solution to operate at 100 percent capacity and increased efficiency.

In conclusion, natural convection — in which products are left to cool in ambient conditions — is cheap but slow. In many applications, using overhead or directional fans to speed up the process can save time and money. They can provide an effective, energy-efficient way to get products to an appropriate temperature for downstream processes quickly.

To find the best cooling method, it is important to evaluate a fan company’s products in terms of its air-velocity profile and coverage area. Consider working with fan companies whose engineers can perform a cost/benefit analysis of various airflow options and determine the best solution for your process cooling needs. PC

Every Fabricator is Unique

In a situation similar to BTD’s paint line, another fabricator wanted to use airflow to cool metal hooks of various sizes, all of which went down the same conveyor. The cooling line was originally designed for smaller products. When the company began fabricating larger hooks, the parts ended up far too hot to handle when they reached the next step in the process — despite cooling via natural for 17.5 minutes as they conveyed to the next station. Since the parts were too hot to handle, the company had to either temporarily shut down the line or remove the hooks to allow them to cool further offline for an additional 30 minutes. Either option significantly reduced productivity. 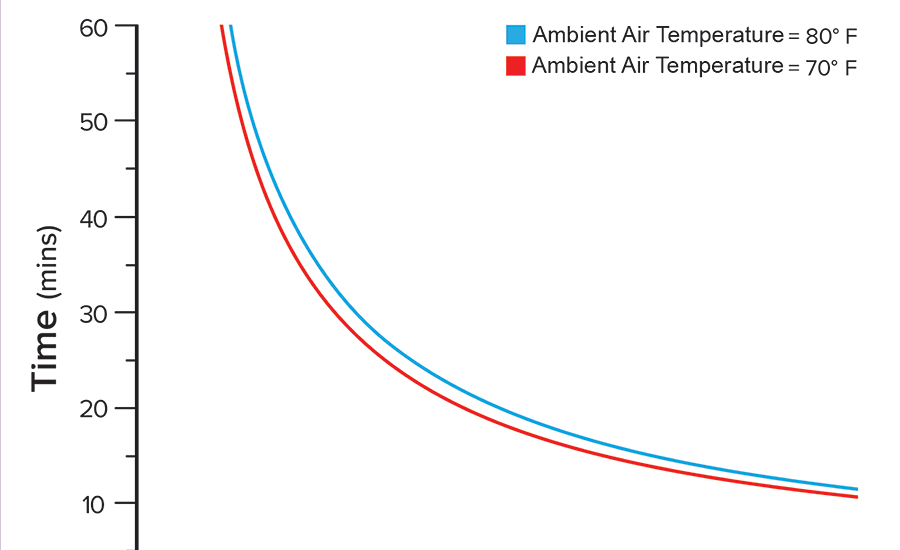 Figure 1: The air speed vs. cooling time required to cool large metal hooks from 200 to 110°F (93 to 43°C) is shown. Calculations and recommendations vary greatly by facility, and the values depicted in figure 1 would not apply to the situation at BTD’s Georgia plant.

The hook-maker consulted with the same fan manufacturer and provided basic information about the conditions along the cooling line. The company also provided the size and geometry of the largest hooks. Using this information, the fan company created an algorithm to graph achievable air speeds vs. the time required to cool the largest hooks to 110°F (43°C). As shown in figure 1, there is a region where the curve begins to flatten out. There, it becomes less prudent to keep increasing air speed for diminishing returns of reduced cooling time.

With these results and the fan air-velocity profile data the fan manufacturer had collected at its laboratory, the fabrication company was able to select the option that best reflected its priorities between acceptable results and cost-effectiveness. A 20-minute cooling time obtained with 900 ft/min of air speed was deemed a substantial enough improvement over the previous cooling times of more than 45 minutes.

It is important to remember that all fabrication facilities are unique. A multitude of factors should be considered when determining which cooling method is right for any given process. With different products needing cooling, oven temperatures, conveyor configurations, ambient temperatures and cooling times, every facility can benefit from a custom-designed airflow process cooling recommendation. Calculations and recommendations vary greatly by facility, and the values depicted in figure 1 would not apply to the situation at BTD’s Georgia plant.

Diego Rich is an applications engineer with Big Ass Fans. The Lexington, Ky.-based company can be reached at 877-244-3267 or visit www.bigassfans.com.

How to Achieve Uniform Parts Cooling and Cut Cycle Times