Forging Ahead with Plastic Cooling Towers

Forging — a manufacturing process of shaping metal by applying a variety of powerful compressive forces to it — is known for producing parts that have excellent fracture toughness and ductility while also offering impact resistance and fatigue strength. The forging industry has achieved an impressive place in the North American industrial economy by producing components with unique benefits that are difficult to duplicate.

Delivering on forging’s attributes, however, requires dealing with the extremely high heat generated during the forging process — up to 2102°F (1150°C). For Patriot Forge, a Canadian supplier of custom open-die and rolled-ring forgings, controlling those high temperatures hinges on dependable cooling tower technology. Frequently used for industrial applications such as refineries, metal foundries and manufacturing plants, cooling towers remove heat from cooling system water and exhaust it into the atmosphere.

With plants in Branford and Paris, Ontario, Patriot Forge produces forged products in materials such as carbon, alloy and stainless steel, nickel-based alloys and aluminum. The products are used in applications as diverse as power generation, petrochemical, heavy-equipment manufacturers, military and aerospace. Such applications require consistent quality, including the vital hardness characteristics of forgings ranging from 5 lb to 50 ton.

Three years ago, the team at Patriot Forge decided to replace the aging, multi-use cooling tower on one of its buildings at the Branford plant.

“The tower we were replacing was a traditional steel model that was rotting out,” says Derek Hynes, senior mechanical engineer at Patriot Forge. “[We had found,] metal models tend to rust and corrode, which usually leads to plugging the water flow — and that can interfere with cooling capacity.” 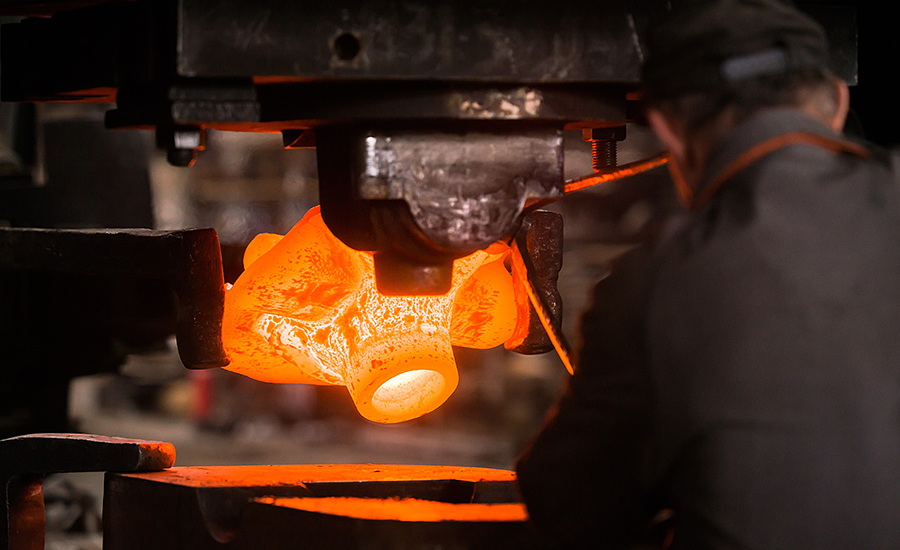 The cooling tower at the Branford plant is used to expel heat from the quench system: a 42,000-gal water tank into which parts are submerged, in water or polymer baths, in order to achieve the desired hardness. Hynes and his team investigated the cooling tower design options available. Key objectives included a tower that could provide reliable, trouble-free operation for a longer period of time.

After its research, the team chose a cooling tower constructed on high density polyethylene (HDPE), manufactured by Delta Cooling Towers. HDPE cooling towers are unaffected by corrosive environments. Also, the one-piece modular tower was expected to require lower amounts of water treatment chemicals than the metal tower it replaced. The HDPE cooling tower also was expected to require less downtime for repair or replacement. Energy-saving features such as direct-drive fan motors were available as an option to help reduce electricity costs.

“We saw that this was a polymer-based tower that was UV protected and included a 20-year warranty, so we were convinced that it would offer long-term dependable service,” Hynes says. 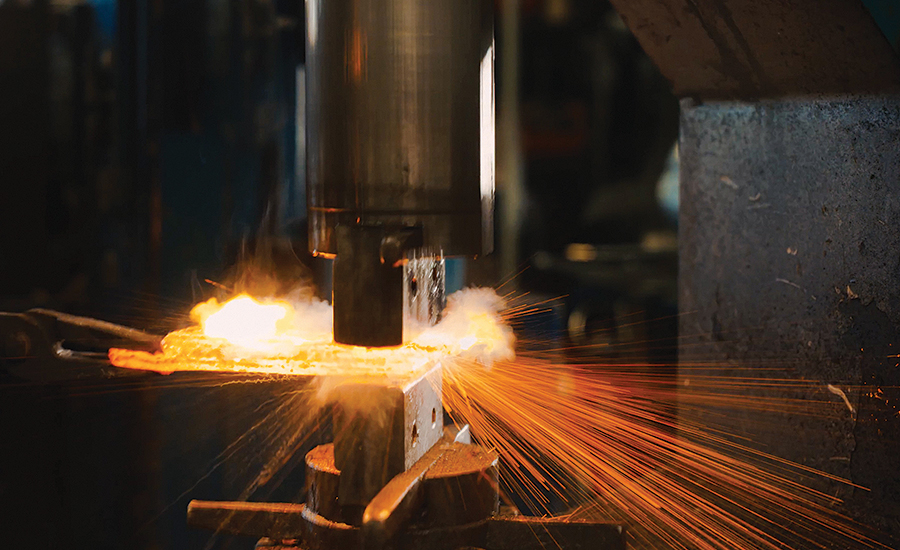 Forging is the process of shaping metal. Powerful compressive forces are applied to workpieces that are heated to around 2102°F (1150°C).

“This new tower needed to support multiple systems within Building One [of the Branford plant],” Hynes explains. “This included cooling the water that flowed through a heat exchanger used to draw heat off the hydraulic systems of three large pieces of production equipment — including the 5,000-ton press that plays a primary role in the forging processes of the plant.

“Essentially, all three machines are cycling the water that flows through their hot hydraulic heat exchangers and then through this cooling tower,” he continues. “This enables us to keep the hydraulic fluids at a stable 110°F.” 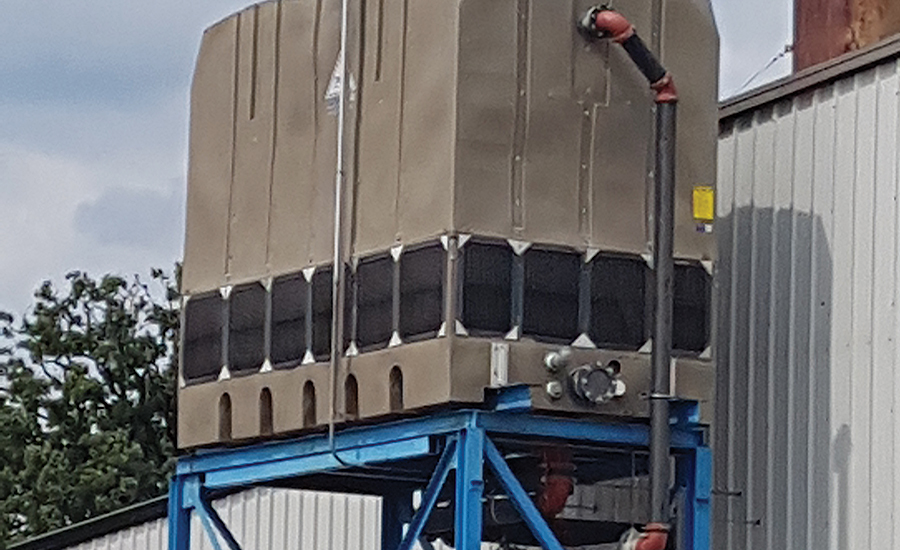 HDPE cooling towers are not affected by corrosive environments.

Satisfied with the second HDPE cooling tower installation, in early 2018, Patriot Forge acquired an additional twin-cell HDPE cooling tower. This cooling system is used to help cool the quench tanks that are part of the company’s heat treat system in a second building at the Branford plant.

“Both of the quench tanks are 105,000 gal, and we use the cooling towers to help maintain a heat level of approximately 100°F,” Hynes says.

The cooling towers that Patriot Forge selected for this building were the same design as the model selected for the earlier installations. This was possible because the unit, Delta’s TM Series towers, can be configure in combinations of up to six units to provide cooling capacity from 250 to 2,500 cooling tons. The modular design allows processors to add cooling towers as the cooling process water demands grow.

The cooling towers installed at Patriot Forge on the second building were configured in a two-cell layout with combined cooling capacity of 836 cooling tons.

“We decided on this size and configuration because the quench tanks in Building Two are much larger,” says Hynes. “So, there is a lot more water you have to process through the towers.” 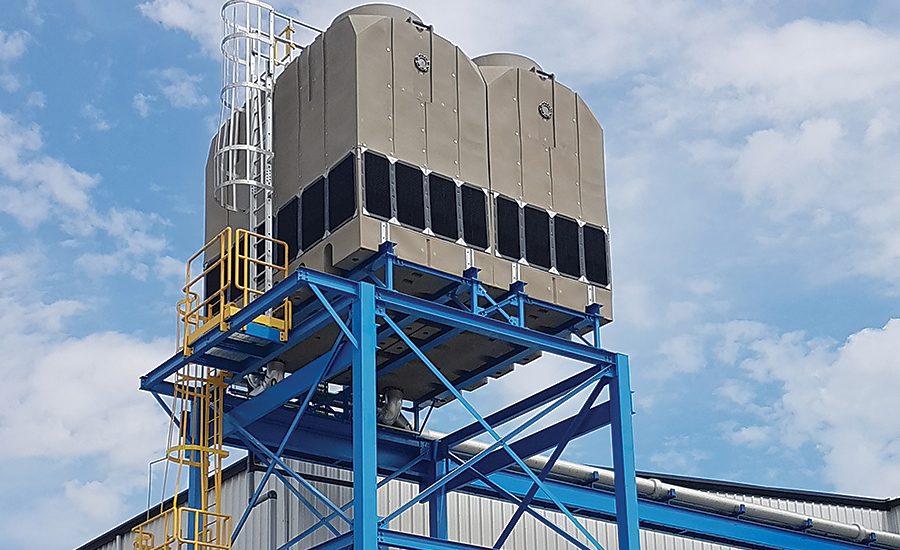 He notes that installation of the factory-assembled cooling towers was relatively easy. “The HDPE plastic towers are lighter, so we were able to use a smaller crane to install them, which was much more convenient than having to deal with larger, bulkier cranes.”

Hynes says the towers has vibration sensors on all fans, which eliminates the need to climb the towers in order to check out the operating performance of the fans. This is one benefit that Hynes feels is particularly appealing because one of the towers tops out at a daunting 65 feet — “a long way up.” PC

They Keep On, Keeping On

They Keep On, Keeping On