Overcoming the Hidden Costs of Water

A steel plant had no choice but to use river water for its cooling towers. Adding electrodeionization water treatment equipment made it possible.

Water is an expensive resource for industrial companies, and it can be especially so for those that rely on cooling towers as a part of the manufacturing process. Cooling towers use a large amount of water on a consistent basis and are subject to scaling and corrosion issues. When the equipment is not maintained properly, an even greater amount of water can be used — and sometimes wasted.

Cooling towers reject heat through the natural process of evaporation, providing cooled water. Depending on the source water, water can contain natural ions such as calcium, chloride and sulfate. Due to evaporative losses, the water remaining in the cooling tower becomes concentrated with these dissolved solids, which contribute to scaling and corrosion. This buildup can affect overall performance and even shorten the lifespan of equipment.

Traditional methods of scale and corrosion control involve dosing chemicals or blowdown. The latter is the the act of discharging a portion of the cooling tower water that has a high level of total dissolved solids (TDS). This operation can result in high volumes of water and chemicals being discharged into the environment. The discharge of this water often requires permitting in order to meet local, municipal regulations if the effluent is being emitted back into the environment or some other locally sourced water system. In many communities, regulations have been passed that require companies to keep local water systems in balance.

The quality of the water introduced to the cooling tower system is key to process efficiency and the frequency of preventive maintenance intervals.

For facilities contemplating using cooling towers, the cost rises further when the water source has extreme fluctuations in quality.

Such was the case for a steelmaker in Lorrain, Ohio, that had to rely on the nearby Black River for its water. Traditional water filtration methods were considered, but they were deemed too expensive and unlikely to be effective. Yet, water treatment technology was required: The steel mill had recently installed a gasification system on-site at its 600-acre facility. The gasification system required the use of a cooling tower for operation. The cooling tower was not able to be fed by municipal feedwater due to the distance of the main water line from the gasification system.

The steelmaker solicited estimates to install a new water pipe connecting the city water mains to the new cooling tower and gasification system. The estimates were in excess of $1.2 million. Due to the high cost of building the water pipe from the municipality, the mill decided to consider other options. 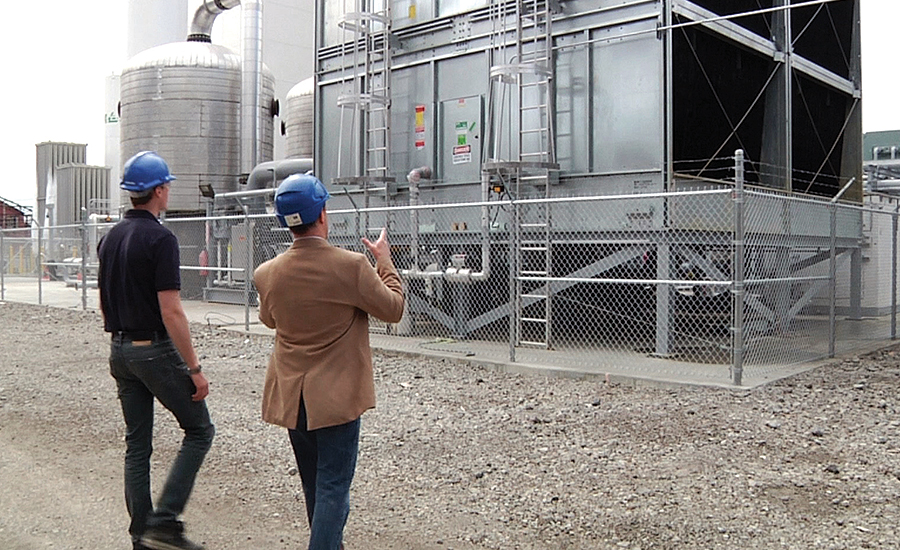 Given the location of the mill, the local Black River became the only feasible water source. Raw water from the Black River, however, would require additional treatment before it could be suitable for use as a feedwater source to the cooling tower.

“Water quality is very important. If the water is dirty, it’s going to plate out in our coolers,” a steel mill official said. “If that happens, we’re going to plug up, and we’re going to be down, which means lost production and a lot of money.”

Initially, the steel plant investigated water treatment methods such as reverse osmosis (RO). The traditional methods the steelmaker investigated required pretreatment and unavoidable, ongoing operating expenses due to the heavy level of treatment needed. Moreover, due to the chemicals required to keep the equipment operational, special environmental permitting was required from the Ohio’s Department of Environmental Quality.

“CapDI [as Voltea calls it] was a particularly attractive solution due to the relatively simple pretreatment requirements as well as the fact that no special permitting was necessary,” says Bryan Brister, CEO of Voltea. “The technology does not use chemicals in order to operate.” 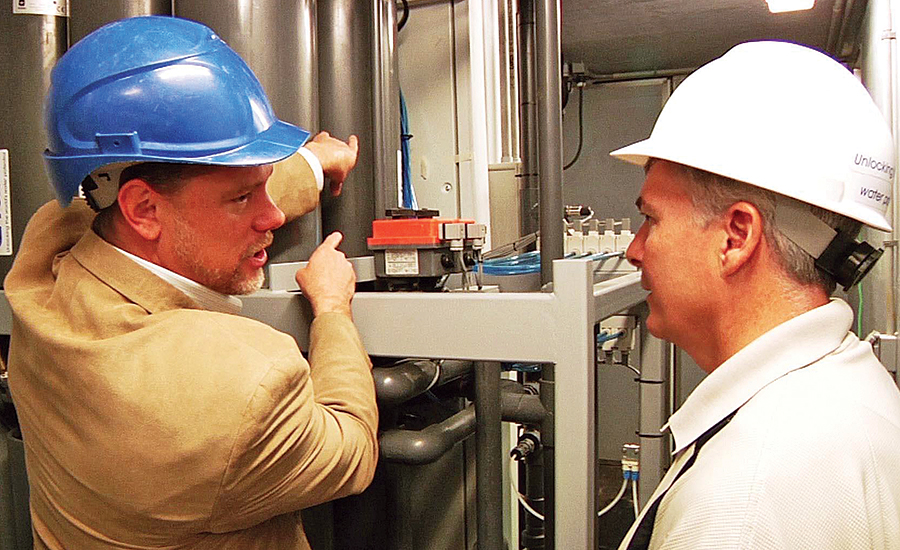 According to the company, membrane capacitive deionization removes total dissolved solids (TDS) from water sources while requiring minimal pretreatment. The technology eliminates dissolved salts and other minerals via DC current, or electrodeionization, where oppositely charged salt ions are attracted to electrodes. Pure water flows from the cells in a two-step process of purification and regeneration. 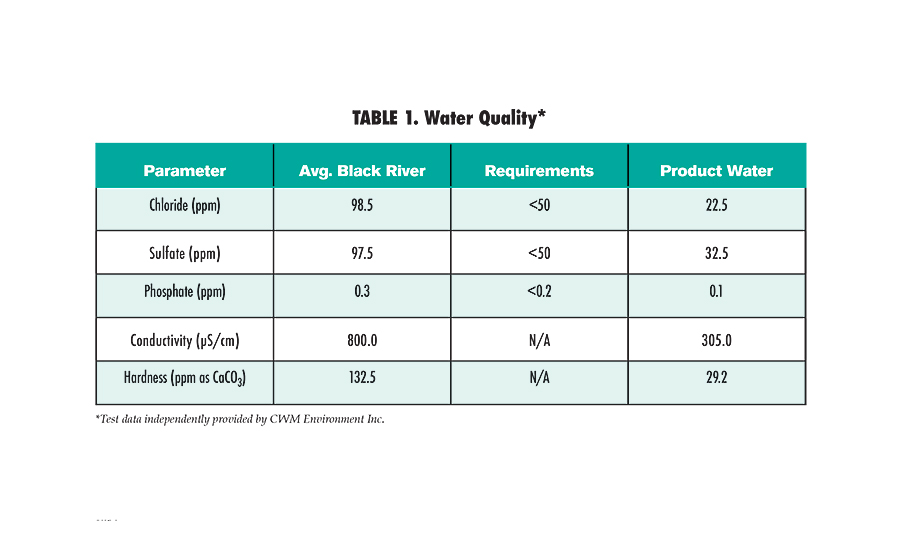 “A major difference between this technology and traditional systems like RO is its tunability feature. This means users can choose the level of dissolved salts that are removed, meaning salt removal is tunable,” Brister says. He adds that not all applications require the same removal rate. The “tunability” feature helps prevent the re-mineralization that might be needed when using desalination and softening technologies.

In addition, the forecasted operational costs included with the assessment were lower than any of the other desalination technologies evaluated, so the mill added electrodeionization.

According to Brister, with membrane capacitive deionization technology, soft salts or chemicals do not need to be added to the system to replace the hard salts that were removed. This allows the same salinity and mineral level that were in the original water source to be discharged without additional, higher salt levels. Water softeners where hard salts are replaced by soft salts have been banned in some municipalities, especially those struck by drought.

The steelmaker’s need for high quality water, as measured by the lowest controlled TDS level, led to its selection and use of the Voltea technology, says Brister. 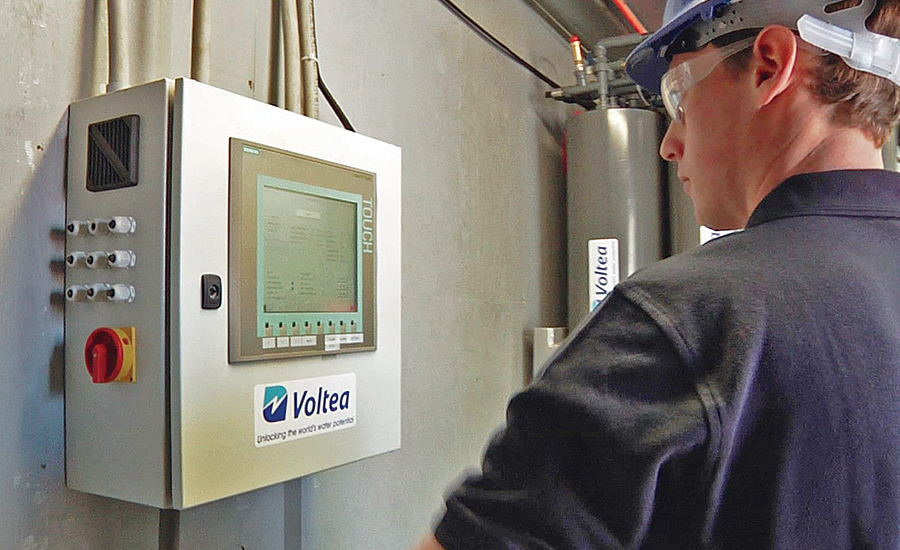 Before installation, average chloride, sulfate and phosphate levels in the Black River feedwater were significantly above the targets set by the cooling tower manufacturer. Desalination of the river water was thus required to make it suitable as a feed source to the cooling tower. As a result, the membrane capacitive deionization system was set to a fixed ion removal rate. This allowed it to meet the water-quality salinity requirements needed by the steel mill and cooling tower manufacturer.

Once the membrane capacitive deionization technology was installed, the salinity level of the feedwater to the cooling tower met the requirements of the manufacturer. Among the data, the companies reported:

Table 1 shows the average mineral and salinity levels of the Black River without treatment. It also shows the target levels for each criterion in the cooling tower feedwater, and the actual purified product water from the membrane capacitive deionization system.

Implementation of dynamic control on the water treatment system improved the overall operation, according to Brister. This allowed it to constantly monitor and adjust performance based on real-world fluctuations in water quality. As a result, a constant water quality is delivered in the purified water regardless of variations in the feedwater coming into the membrane capacitive deionization system. One month of continuously monitored data is shown in figure 1. 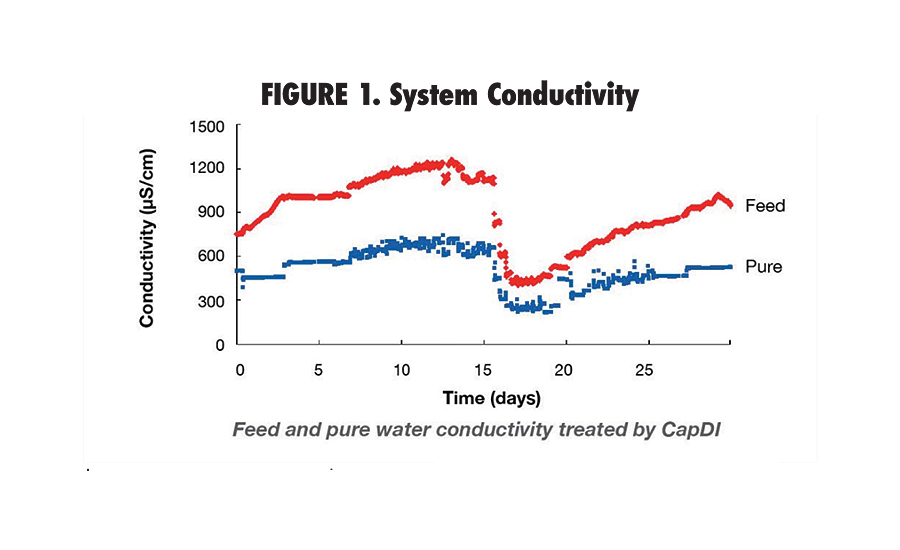 In conclusion, the Black River — previously deemed unfit for cooling tower applications using desalination technologies — became a reliable feedwater source following the implementation of electrodeionization technology. The technology also allowed the reduction of chemicals, water consumption and wastewater. The chemical-free electrodeionization technology enabled the site to discharge the concentrated effluent of the system directly into the river without having to secure an additional site permit for disposal.