Industrial buildings are good candidates for evaporative cooling, but it is most effective when the proper solution is chosen.

Industrial buildings are good candidates for evaporative cooling. The facilities are typically quite large — with tens of thousands of square feet — and often have high roof structures (more than 30 feet) to provide crane clearance, manufacturing equipment clearance and racking systems. The result is a large volume of space that might require tempered air for the benefit of equipment and employees. Typically, attempting to accomplish that air tempering with conventional direct expansion or hydronic systems would result in huge operating expenses.

In addition, typical industrial applications do not require comfort cooling type conditions. This is another reason that evaporative cooling offers an appropriate. Air movement and air temperatures in the mid-80s or even higher are all that are required to keep equipment cool provide relieve to workers to be productive and efficient. 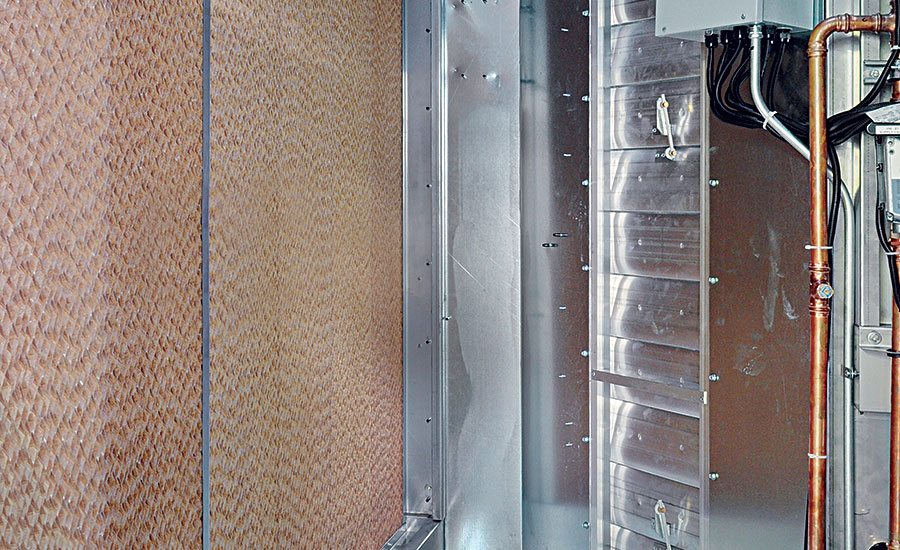 Some systems employ a media that is wetted, and the air passing through the wetted media is cooled adiabatically. The media typically found in current industrial applications is a reinforced cellulose pad.

Getting Started with Evaporative Cooling

Selecting an evaporative cooling solution for an industrial facility starts with sizing the system. While it might seem basic, it is important to have — and understand — a psychrometric chart (or an electronic version). You also will need detailed weather data, including mean coincident wet-bulb information, for the facility’s location.

Evaporative cooling comes in two basic forms: direct and indirect. Direct evaporative cooling does not involve a heat exchanger. Instead, the cooling performance follows the wet-bulb line on the psychrometric chart — from lower right to upper left, approaching the saturation line. Outside air passes through a cooling media or misting system, and that exposures causes a temperature drop as well as a corresponding increase in the humidity ratio.

An indirect evaporative cooling system includes a heat exchanger. Air or a fluid is cooled by evaporation in a closed loop.  Then, the cooled fluid and the incoming outside air pass in opposing channels of the heat exchanger, where the fluid absorbs heat from the incoming outside. In this case, the cooling performance follows the dry-bulb line on the psychrometric chart from right to left with no change in the humidity ratio.

In order to determine the possible temperature of the air when it leaves the air handler, you need to know the effectiveness of the evaporative cooling system. 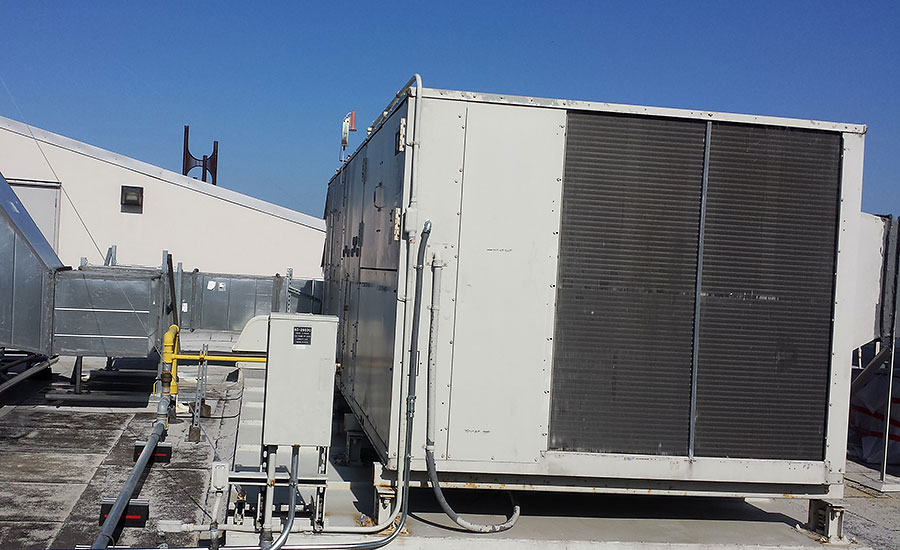 An evaporative cooling unit can be installed on the roof of an industrial building.

Some systems employ a media that is wetted, and the air passing through the wetted media is cooled adiabatically. While there are new media materials introduced, the media typically found in current industrial applications is a reinforced cellulose pad.

Manufacturers of this type of media constantly research different angles of airflow through the media and different densities in order to enhance performance; however, currently, a typical cellulose media will have an effectiveness of 90 to 95 percent at 450 to 500 ft/min of face velocity. Knowing the effectiveness allows users to calculate the approximate leaving air temperature of the direct evaporative cooling unit.

The calculation for indirect evaporative cooling is basically the same; however, the effectiveness is going to be lower. There will be losses in the transfer of the air or fluid that has been cooled by evaporation and losses in the heat exchanger design itself. Because there are many types of indirect evaporative cooling technologies, it is necessary to consult with the equipment manufacturer to determine the effectiveness level to use in the calculation. Using direct vs. indirect means you will be trading a smaller temperature change for air that does not increase in moisture content. There are cases when that trade-off can be important. 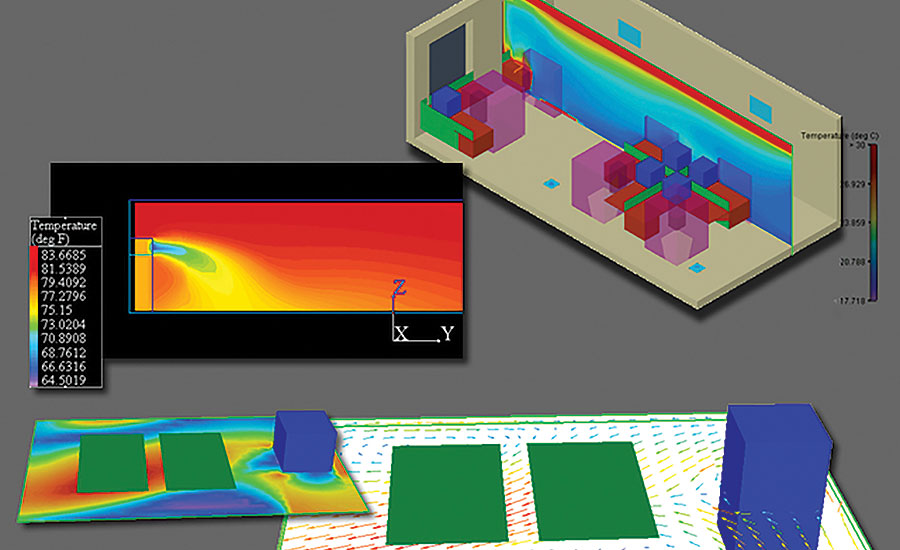 CFD modeling can be helpful in analyzing the optimum location for the equipment and the air-distribution system. While this analysis can be time consuming, the end result will allow a better application with fewer problems in the facility.

Even in an industrial space, however, evaporative cooling usually is applied as a spot cooling solution. Workers, heat loads and even exhaust requirements are scattered around an industrial space. It makes little sense to try to temper the entire work environment. This is where the application becomes more complicated. Distributing the air where it is needed can involve clever placement of units and, sometimes, creative ductwork systems.

For instance, in the case of worker cooling at a work center without a significant equipment heat load, the evaporative cooling system usually will be roof mounted. A four-way discharge on the end of a duct can be dropped as close as possible to the occupied zone. There are limitations to that arrangement, of course. A four-way distribution system leaves a dead zone directly beneath the distribution plenum, so it cannot be placed directly over the workstation. The more common problem with this placement is that an industrial space has crane tracks, overhead power distribution, overhead water distribution and other obstructions that prevent dropping the distribution system far below the roof. The supply air should be angled as much toward the floor and the work area as possible; at the same time, the velocity of the air must be kept below 75 ft/min at the worker level, or it becomes uncomfortable and counterproductive.

In the case of makeup air for a process or heat load, the question of air movement and location might be even more critical. Some processes involve powders or materials that cannot be disturbed during the manufacturing process. So, while a direct airstream would be suitable for a worker, it could ruin a process. 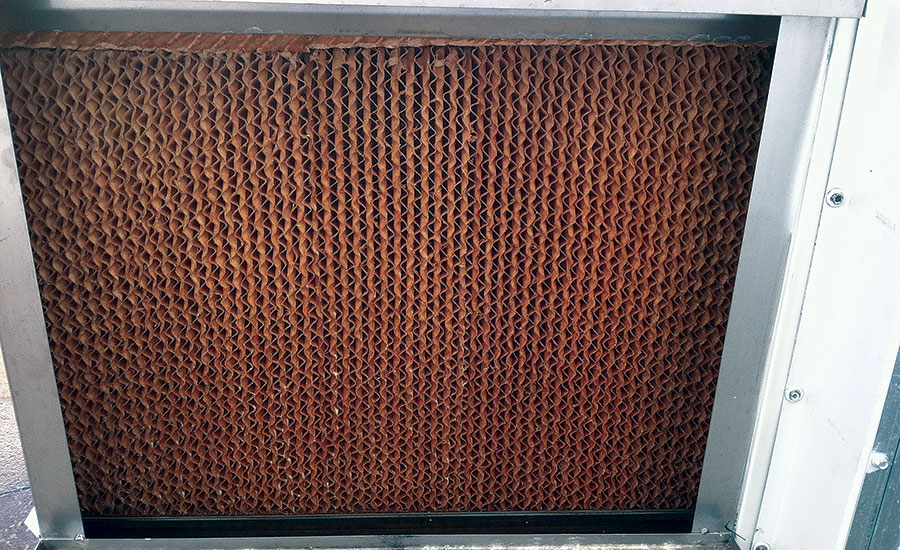 Although cellulose media is an effective media, it is flammable when dry. The equipment should be located away from potential sources of flames. If this is a concern in the facility, using glass-fiber-based media will mitigate the concern (albeit at a higher cost).

In this case, creating a displacement-type air-distribution system can often be effective. A displacement system uses clean air to force the heated or contaminated air up and away from the work area to an exhaust system overhead. This obviously requires distributing the air at floor level — or as close as possible to the floor. The ductwork for such a system can be complex due to the various overhead systems mentioned earlier.

As an alternative, one type of direct evaporative system is mounted on the factory floor with air-distribution fans at the floor level blowing the air horizontally. Because this is an evaporative cooling system, it requires outside air. This means such a system must be installed near an outside wall. When that is not practical, or when such an installation would place the unit too far from the heat source, it may make sense to install a horizontal duct that does not interfere with other overhead systems.

The possible applications and considerations in an industrial environment are so broad that a brief article cannot possibly capture every thought. In summary, here are a few things to consider: 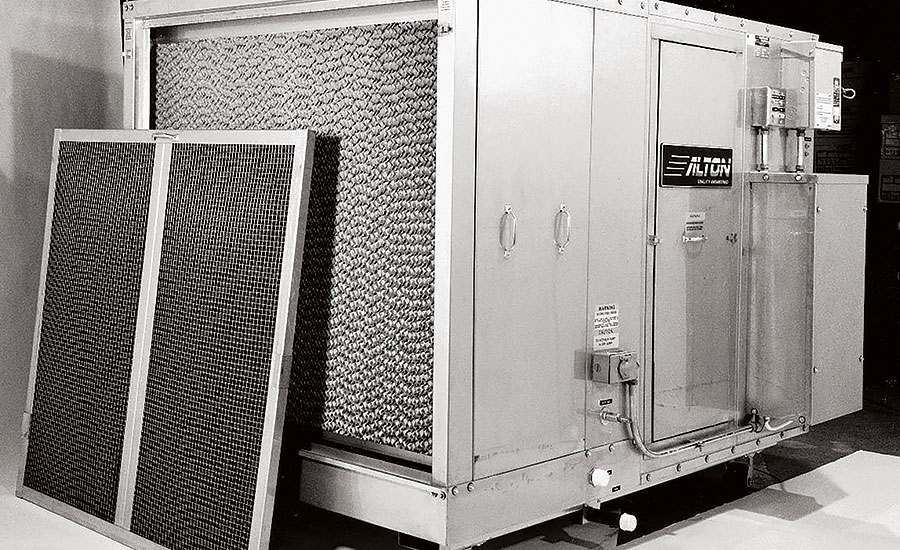 The use of computation fluid dynamics (CFD) modeling can be helpful in analyzing the layout for any evaporative cooling equipment and air-distribution system. While this analysis can be time consuming, the end result will allow a better application with fewer problems in the facility.  PC

Mike Kaler is a consultant and former president with Mestex, Division of Mestek. The Dallas-based company can be reached at 214-638-6010 or visit www.mestex.com.