This website requires certain cookies to work and uses other cookies to help you have the best experience. By visiting this website, certain cookies have already been set, which you may delete and block. By closing this message or continuing to use our site, you agree to the use of cookies. Visit our updated privacy and cookie policy to learn more.
Home » Monitoring Cold Storage in Research and Pilot-Plant Facilities
Ammonia RefrigerationTemperature Control/SensingRefrigeration SystemsFood ProcessingDairy Foods
Cold Storage

Industrial wireless networks provide a solution when pilot-scale lab facilities do not have the infrastructure to support industrial instrumentation.

The importance of cold storage for certain chemical products, particularly organic peroxides, hit the headlines in the aftermath of Hurricane Harvey in 2017. When a plant outside Houston was flooded and lost power, it also lost its cold storage for the organic peroxide products produced at the site. As they warmed up, the surrounding area was evacuated in anticipation of the resulting explosions and toxic releases.

Most situations where cold storage is required are not as dramatic. Usually, the worst that can happen is spoilage. While it can certainly have significant economic consequences, including product losses and disposal, it does not imperil plant or personnel.

Cold storage can take many forms. They range from a small cooler used to store pharmaceutical products to large facilities where food products such as ice cream are produced and stored. The entire delivery chain — including production, transportation and storage — must be kept cold to avoid product loss. The ice cream example is easy to visualize: a consumer will easily know if the product has thawed and been re-frozen. For something like a critical pharmaceutical product, it may be more difficult to tell.

For these types of products, storage temperature is effectively a process variable, just as a reactor temperature or pressure. Documentation of storage temperature becomes part of the traceability chain, and it must be measured and recorded at all stages. This often requires a wireless networking infrastructure, preferably one designed to work in critical applications. WirelessHART networks offer a solution that provides the capabilities needed with minimal required maintenance.

Large cold-storage facilities such as an ice cream plant have appropriate temperature control and monitoring equipment. Very small applications may have little to lose — as long as the refrigerator or freezer is running, that’s enough information. The difficult situations are where relatively small cold-storage equipment lacking monitoring capabilities must be used for products requiring monitoring for traceability or other production records. When small units, which may even be moveable around a facility, need to be monitored, it can present challenges.

Small storage units are common in research or pilot-plant environments. Such environments are more like offices than industrial facilities in many respects. Adding a temperature sensor to a freezer is easy enough, but where does the data go? In some respects, building a device-level network to communicate with field instruments in a low density, nonindustrial environment can be more challenging than automating a refinery or large chemical plant because there is no appropriate networking infrastructure. Still, the right tool needs to be used for the job because industrial equipment works best for these types of networks.

Research and pilot-plant facilities typically manufacture small batches of products prior to commercial-scale production. These facilities need to have whatever equipment is necessary to produce a range of products, so much of the equipment is moveable and can be relocated to accommodate the requirements for any given project. An example is creating a device-level network to capture data from moveable freezers and refrigerators. 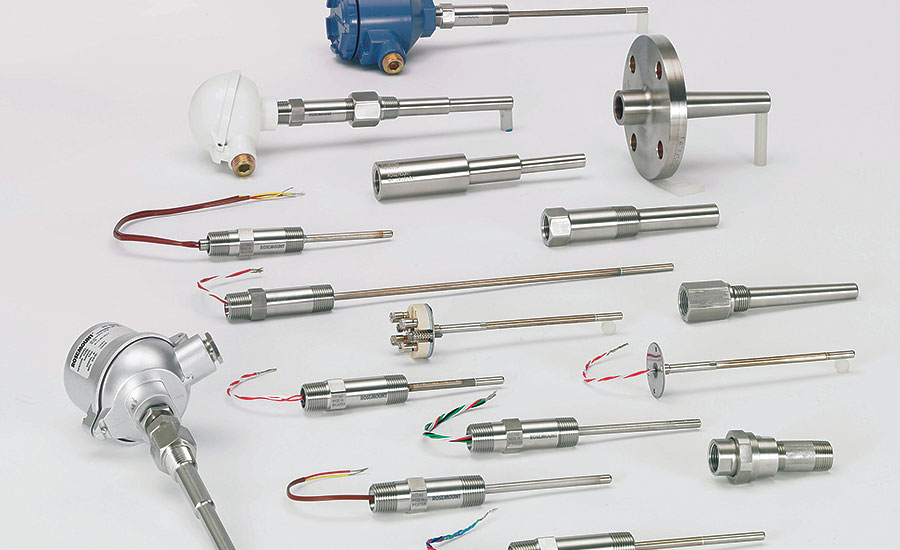 Industrial temperature sensors come in all shapes and sizes.

Virtually any industrial facility or office these days has some kind of an IT networking infrastructure. For most, this means a mix of wired and wireless Ethernet with connections to the internet. Wireless coverage often is spotty, and these types of networks are designed to support business needs. This means they may not necessarily coincide with accommodating a device-level network to support temperature sensors and other instrumentation.

The nature of most instrumentation does not help the situation because there is little designed to communicate via commercial Ethernet protocols. Still, if Ethernet from IT is the only network available, there are devices available to set up the remote I/O stations needed throughout a facility. These stations accept data from field devices and get tied together using wired Ethernet via the business LAN. System architects normally set up a virtual LAN within the system so they can have fixed IP addresses along with a floating domain name system.

Data from the I/O stations can be collected at a central point, where it is sorted and historized using an appropriate platform. This approach can work, but it is often far from ideal. For example: 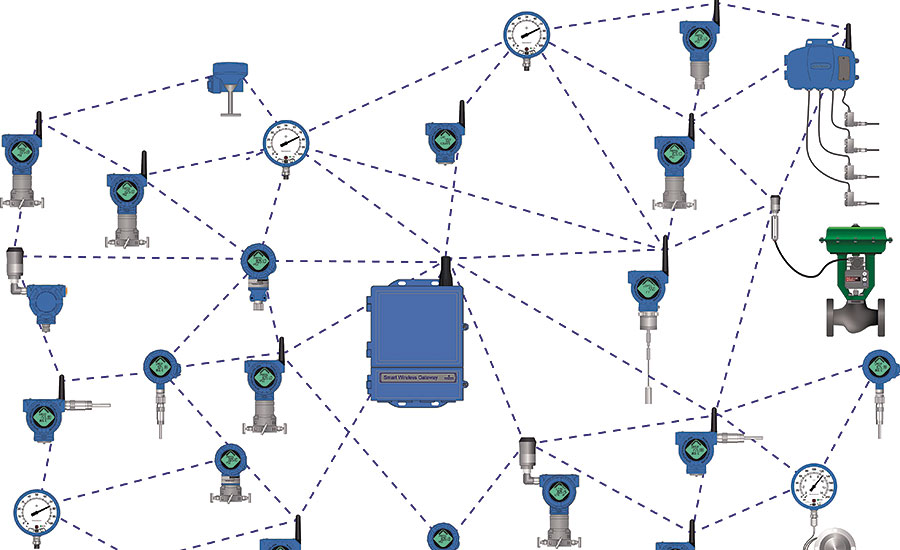 WirelessHART uses a self-organizing mesh network of device transmitters communicating with a gateway.

Wireless networking can mitigate some of the problems, but wireless Ethernet retains many of the basic problems of wired Ethernet. A different kind of wireless provides a more practical answer.

If industrial instruments are needed to achieve the required reliability and accuracy, it is necessary to use industrial networking. A leading wireless network for instrumentation and control devices is WirelessHART, and it has much to offer in these types of situations. While it was originally designed for the complex and potentially harsh environments of process manufacturing facilities, WirelessHART also works well in light manufacturing or office buildings. While every situation is different, the radio signals it uses propagate in much the same way as WiFi. They can pass through walls and floors with little trouble.

WirelessHART uses self-organizing mesh techniques, which means individual device transmitters transfer signals between each other as necessary to reach the gateway. If one path does not work, it will automatically find another. Network diagnostic tools capture how the network is working and can create snapshots of the interaction. This information can help network managers identify whether there are links that are being blocked by physical obstructions. If necessary, specific devices can be relocated or other devices inserted into the network to bridge gaps. 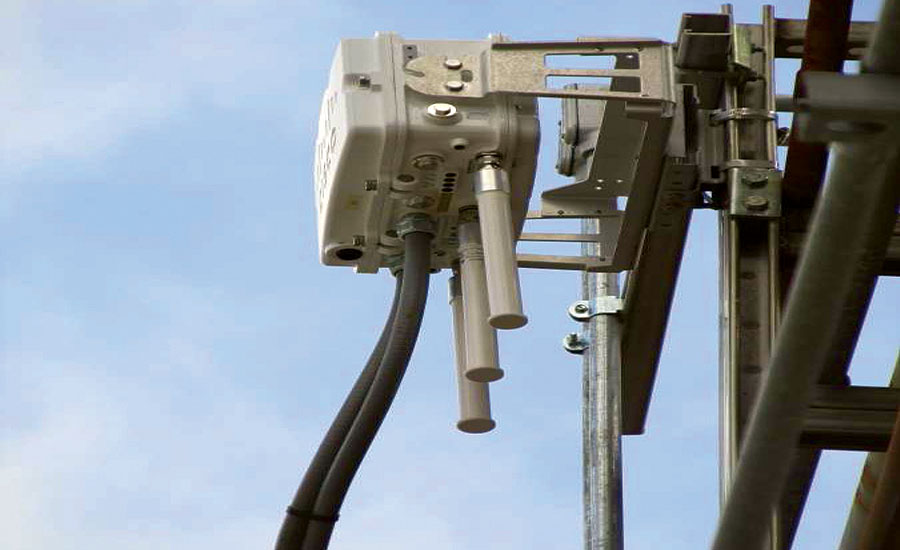 A wireless gateway sends the collected data from all the WirelessHART devices via Ethernet.

Keep in mind that a WirelessHART network is just as good at sending data from a pressure, flow or level instrument as it is temperature. A signal is a signal, so if there is a requirement for a different type of instrument, it is not a problem.

When it comes to measuring temperature, the options are vast. Every imaginable sensor configuration is available using RTDs and thermocouples, so fitting one to a specific cold-storage unit is rarely a problem. For a single unit, a simple temperature sensor and WirelessHART transmitter can do the job. If a larger unit has multiple storage areas and needs multiple sensors, there are transmitters designed to send data from up to four sensors on one signal.

Cold-storage units can be outfitted with switches that are able to detect if a door is open or if it is disconnected from its power source. Clever users have found ways to make a door switch behave like a temperature sensor to send the signal via a slot on a multi-sensor transmitter. Some of these situations may merit alarms to call for corrective action before product is ruined.

If a unit is moved to a different part of the building, the WirelessHART network automatically adjusts itself. As long as a transmitter can still reach the gateway or another transmitter on the network, it continues to work in its new location. The diagnostic tools indicate how the paths change in response.

Diagnostic information from the temperature instruments can warn of any developing equipment problems, including the remaining power life of any self-powered instrument on the network. Industrial-strength calibration tools, including lead compensation for RTDs, are also supported, avoiding the cumbersome work-arounds and manual steps necessary with a commercial grade Ethernet-based LAN system. 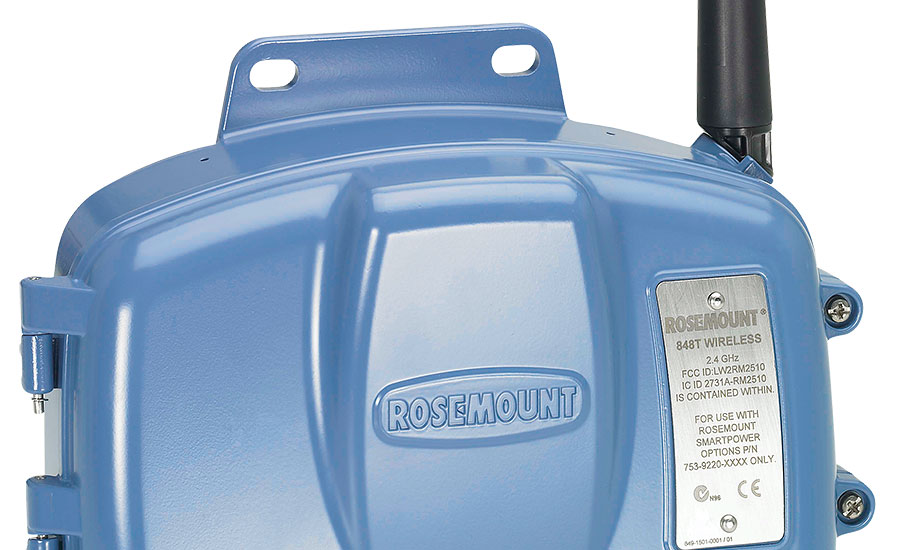 Some temperature transmitters such as this one can send data from up to four sensors on one signal.

While the WirelessHART network operates on its own, it may still need to interface with an IT Ethernet infrastructure, which is easily accomplished via the gateway. The same gateway that communicates with all the wireless devices can also send data collected from wireless devices to whatever platform is doing the collecting and analyzing via the facility’s network. The elements relating to the WirelessHART functions and network management remain independent, providing the industrial strength capabilities required for these types of critical applications.

As noted earlier, a facility is not limited to using just temperature sensors. All types of process instruments are available as native WirelessHART devices, and any wired instrument can communicate via a wired-to-wireless adapter. Monitoring cold-storage units may prove to be just the beginning once the network infrastructure has been set up. Gaining the benefits of a more industrial network rather than trying to force industrial equipment to work within an office environment can make life for instrumentation engineers far easier, and their efforts more efficient and effective. PC

Chris Meyer is a senior field sales engineer for Emerson Automation Solutions. The Shakopee, Minn.-based company can be reached at 800-999-9307 or visit www.emerson.com.