This website requires certain cookies to work and uses other cookies to help you have the best experience. By visiting this website, certain cookies have already been set, which you may delete and block. By closing this message or continuing to use our site, you agree to the use of cookies. Visit our updated privacy and cookie policy to learn more.
Home » Minimizing the Risk of Corrosion During Repairs and Layup
ChillersCooling TowersAll Process Industries
Cooling Towers and Chillers

Minimizing the Risk of Corrosion During Repairs and Layup

Vapor-phase and migrating corrosion inhibitors can help minimize corrosion and protect new or laid up chillers and cooling towers.

Industrial process cooling equipment such as cooling towers or chillers can corrode before they are installed or while they are temporarily laid up for the season. This is especially so if equipment is exposed to harsh outdoor conditions during shipping or storage. As moisture cankers away at the equipment, it produces particles of rust and corrosion that can clog the system, reducing efficiency and causing maintenance problems once the equipment is started up. In inclement outdoor conditions, equipment externals also may decay, reducing the usability (or value) of the asset. Even equipment such as reinforced concrete cooling systems face corrosion problems: rebar corrosion threatens structural durability and service life.

Simple but effective steps can be taken to help protect process equipment from corrosion. These methods can be employed to new equipment prior to commissioning, to existing equipment during seasonal layup, or to reinforced concrete cooling systems during repairs or routine maintenance.

Protecting new and unused cooling system equipment is an important but sometimes overlooked activity. Such protection can serve as a sort of insurance plan for manufacturers who want equipment to arrive at its destination in like-new condition without customer complaints.

Hydrostatic testing and shipment via oceangoing vessels are activities that make equipment especially vulnerable to corrosion. Such tasks often must be carried out despite the risk. Even after equipment arrives at the final destination, installation may be delayed for large projects. This can leave cooling equipment idle and exposed to harsh outdoor environments. In such cases, advance protection can serve the interests of the manufacturer and end user. 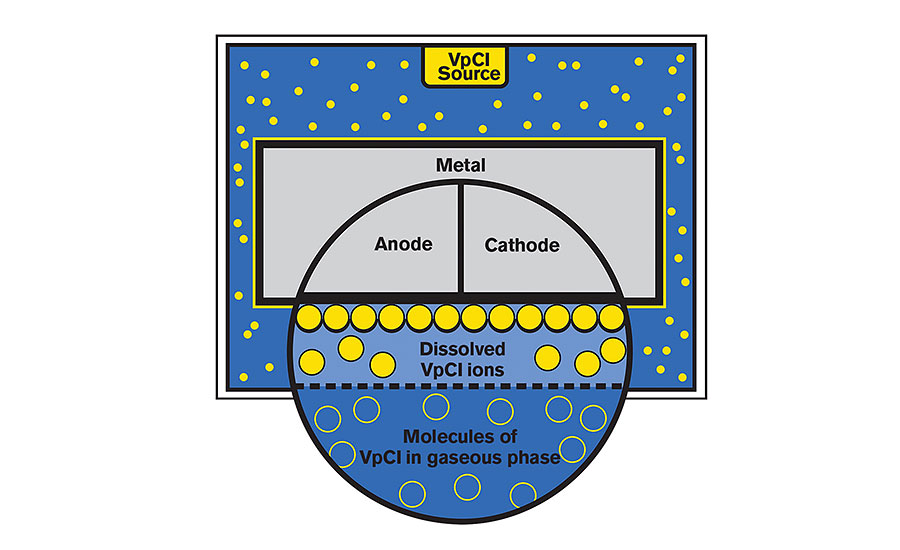 Vapor-phase corrosion inhibitor molecules are dispersed throughout an enclosed space to form a protective layer on metal surfaces.

Protection is achieved through the use of vapor-phase corrosion inhibitor (VCI) technology, which is based on salts of amine carboxylates that have a relatively high vapor pressure. Vapor-phase corrosion inhibitors tend to vaporize and spread out to fill an enclosed space similar to how the scent of an air freshener spreads out to fill a room. When equilibrium is reached, the corrosion-inhibitor molecules attach — the technical term is adsorb — to the any metal surfaces they contact. This creates a protective layer to impede the natural corrosion reaction that would otherwise happen when moisture, oxygen and chlorides or other contaminants reach the metal surface. When the enclosure is opened, the protective molecules of the corrosion inhibitor leave the surface as they head for more open space (similar to when the door on a room is opened and air freshener fragrance starts to escape). As a result, most vapor-phase corrosion inhibitor products do not need to be removed before equipment use, simplifying startup. 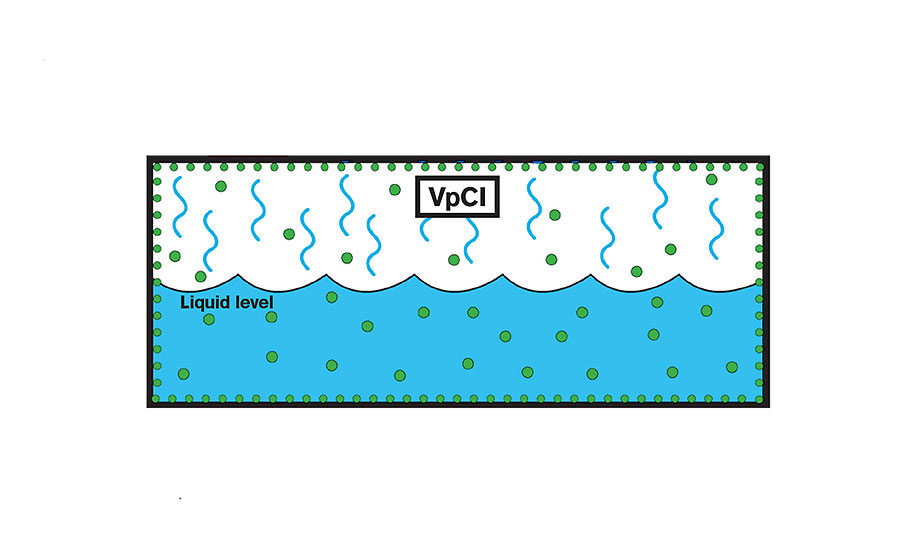 Vapor-phase corrosion inhibitor can be used to protect metals below and above the surface of the water, providing more thorough coverage than contact-only inhibitors.

For instance, this method was used to protect new cooling equipment designated for use at a district cooling plant on an island in the Middle East. An environment with high chlorides, extreme heat and high winds, it threatened the quality of the chillers when they arrived earlier than needed. The chillers were initially protected with tarpaulins that quickly proved ineffective and had to be replaced every couple months. 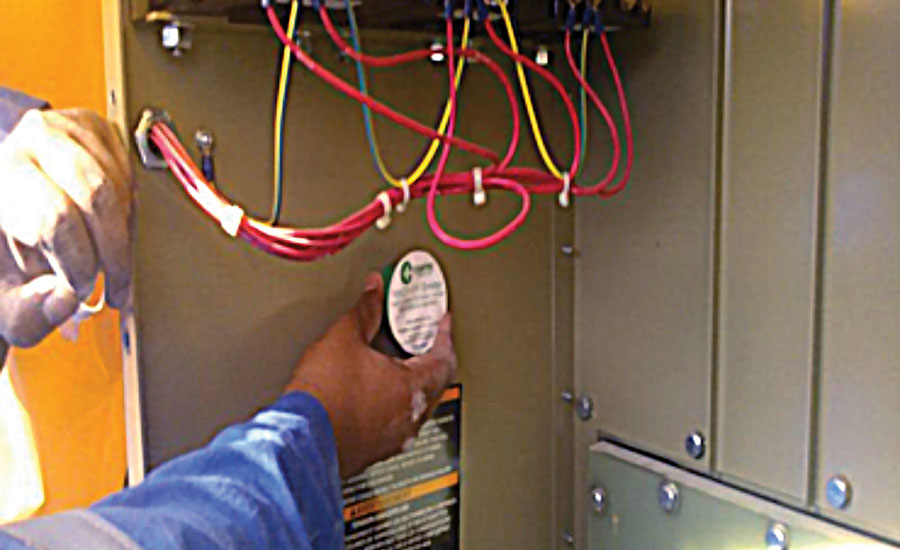 Methods similar to those used for new equipment can be used for seasonal layup of equipment. Such approaches help to avoid problems with corrosion flaking off and clogging the system at restart.

For example, at one industrial plant supplying comfort cooling equipment, corrosion during equipment layup would cause problems during restart. Clogging from severe corrosion and iron flakes produced during winter layup diminished equipment efficiency and required maintenance.

To address the problem, the company decided to add water-soluble pouches of vapor-phase corrosion inhibitor in the cooling tower basin at the time of layup. The water was drained to the lowest possible level for operation. Non-ionic biocide also was added as part of the routine sterilization procedure. The water-soluble pouches dissolved in about five minutes, and the vapor-phase corrosion inhibitor was circulated through the system for eight hours before draining it for layup. Inspection found a noticeable drop in the amount of rust and corrosion that occurred. 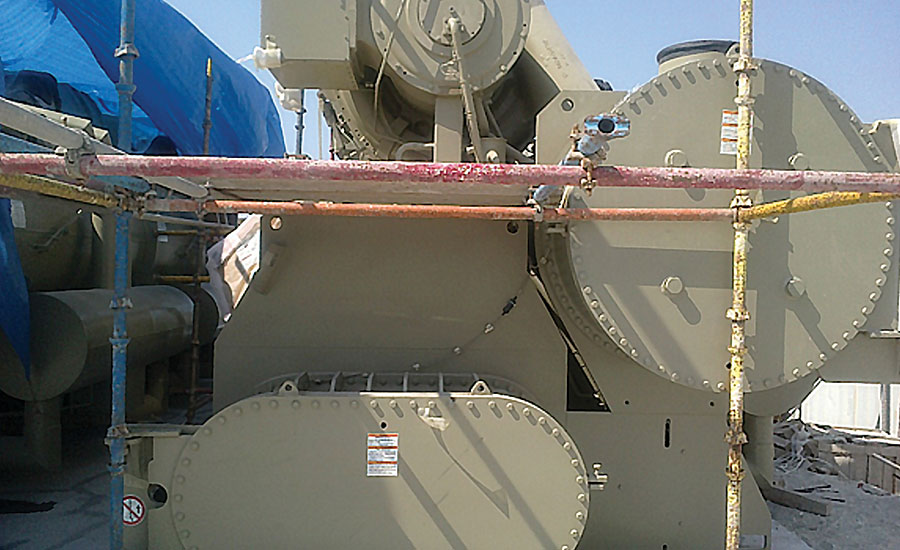 When the chillers arrived at a plant in the Middle East earlier than expected, vapor-phase corrosion inhibitor pouches were used to protect the equipment until startup.

Some cooling towers are made of reinforced concrete. For such equipment, migrating corrosion inhibitors can be used to deter and slow corrosion, thereby enhancing the durability of these structures.

Similar to vapor-phase corrosion inhibitors, migrating corrosion inhibitors work their way through concrete pores to form a protective molecular layer on the surface of the rebar. This layer helps protect the rebar from the corrosive interactions with moisture, chlorides or other contaminants that would normally take place when the rebar is unprotected.

Migrating corrosion inhibitors can be applied to new or existing towers. For instance, they can be applied as admixtures to concrete when constructing new cooling towers or to existing surfaces as liquid surface treatments. (The latter can be performed as part of maintenance procedures every 10 years.) Migrating corrosion inhibitors also can be mixed into repair mortars for structures where the concrete has already begun to crack and spall due to corrosion.

A good example of how these repairs are done is the case of a concrete cooling tower experiencing severe deterioration at a facility in Eastern Europe. The cost of repair while maintaining structural integrity was weighed against the cost of replacement. Repair using migrating corrosion inhibitors was chosen. 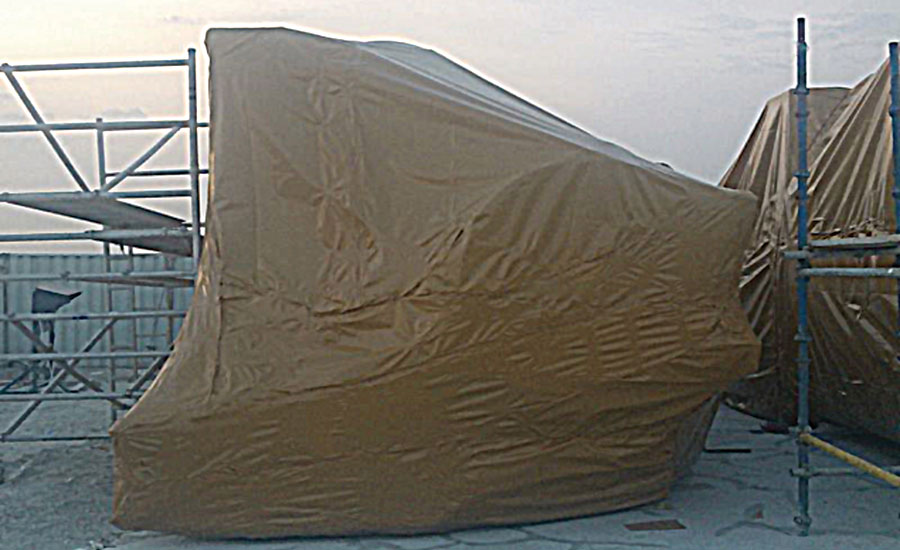 To complete the renovation, loose concrete was removed using a high pressure water blast. An organic gel rust remover was applied to the rebar where rust was extremely heavy, and this was followed by a neutralizing alkaline rinse. Then, a migrating corrosion inhibitor passivating grout was immediately applied to the exposed rebar. Corrosion inhibitor repair mortars also were used as needed to rebuild parts of the structure. Areas that did not require repair were sprayed with a migrating corrosion inhibitor surface treatment to penetrate and protect rebar where the structure was still sound.