Anyone in the industrial or wastewater industries knows that cooling towers are among the largest consumers of water. Even small towers use more than 105,000 ft3 (3,000 m3) of water per year. To put things in perspective, that is enough water for more than 200 households.

This water naturally contains ions such as calcium, bicarbonate and sulfates that are concentrated through cooling tower operation, causing scaling and corrosion of the heat exchangers. This reduces efficiency, increases operating costs and maintenance, and, ultimately, reduces the equipment lifespan. Traditionally, companies rely on chemicals to control this scaling and corrosion. While this treatment enables them to increase the cycles of concentration and reduce water consumption, it can be expensive and time-consuming. In addition, it creates a relatively expensive byproduct in the form of a difficult to- discharge blowdown containing high concentrations of corrosion inhibitors and anti-scalants.

This high water and chemical consumption represents a financial cost for the company as well as a cost to be borne by the environment and wastewater treatment companies.

Water scarcity issues and new regulations being put in place around the world are only exacerbating this situation. These factors are compelling many companies to find other ways to handle the plant’s water needs and operate the cooling towers.

A Unilever* manufacturing site in Pratau, Germany, was faced with the dual problem of climbing maintenance costs coupled with low water efficiency associated with its water tower cooling system. To make matters worse, the plant is located in an area known for extraordinary high water costs. Those expenses were adding up fast.

In order to treat its water, the A margarine manufacturer needed a water treatment technology that would help control overall costs while reducing water consumption. site relied heavily on chemicals. This meant that the company was paying to discharge the water to the municipality: The water needed extensive treatment before it could be reused or discharged. The Pratau team did not see this as a reliable or sustainable solution; instead, it was one was causing more problems in the long run.

Cycles of concentration and the efficiency of cooling towers depend greatly on the water quality. The margarine producer first used traditional technologies — reverse osmosis (RO) — to reduce the total dissolved solids (TDS) content of the water and cut chemical consumption. 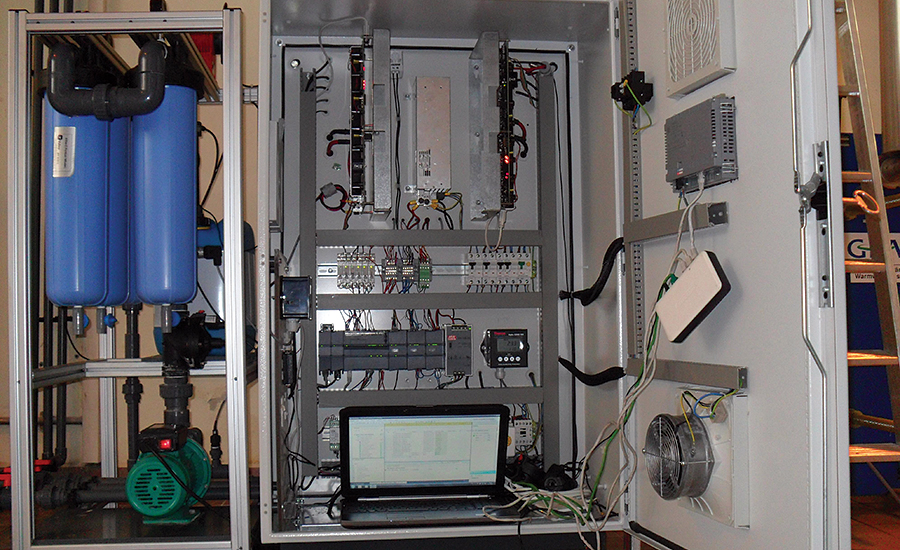 A view of the interal panel box of the membrane capacitive deionization, as installed at the plant in Pratau, Germany, is shown.

Unfortunately, the ultrapure water produced by RO proved ineffective as a long-term solution due to its inherent aggressive properties. The ultrapure water degraded and damaged the cooling tower and supply piping. All salts and TDS are removed in the RO process, which can leave the water unbalanced. In an attempt to neutralize itself, the water removes iron from the cooling tower pipes. Over time, this causes corrosion and structural damage to equipment, which also negatively affects water consumption.

To prevent this degradation, RO systems typically rely on water softeners. Not only does this consume more water, but after the water evaporates, a high concentration of salt is left behind, causing scaling and corrosion. Overall, the RO solution also had high operational and maintenance costs.

The spreads manufacturer had an urgent need to reevaluate its cooling tower operation. Increasing anti-scalants and corrosion inhibitor usage was leading to spiraling chemical costs, and water treatment in the form of RO had proved unviable. 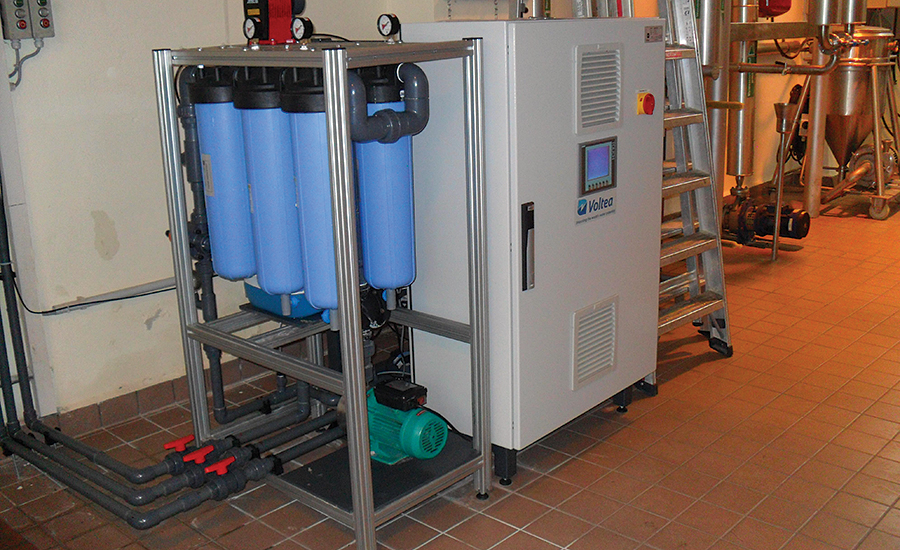 After reviewing the options, the company identified a water treatment technology that would eliminate the issues experienced with RO, minimize chemical usage, and significantly reducing water consumption and overall costs at its Pratau facility.

The company selected membrane capacitive deionization (CapDI), supplied by Voltea, Farmers Branch, Texas. According to Bryan Brister, Voltea’s CEO and president, CapDI is a low energy water purification technology wherein TDS is removed via the application of an electrical current. The technology relies on a two-step process: positive ions are attracted to the negative electrodes while negative ions are attracted to the positive electrodes to create a stream of water flowing out of the system with a controllable TDS. When the electrodes are fully saturated, they flip the polarity, allowing the ions to be discharged.

Voltea recommended its Industrial Series 2 (IS-2) system for the Pratau location. This system allows the original water source to be discharged without any additional salt levels, producing high cycles of concentration and reducing overall water consumption.

“One major difference between membrane capacitive deionization and traditional systems like RO is its ‘tunability’ feature, allowing the system operator to set the desired TDS concentration of the output water required for their cooling tower or equipment based on their operation style or the desired cycles of concentration,” Brister says. “The technology will then deliver consistent quality output even if there is variation in the incoming water source.” Real-time, remote monitoring and control capability minimize user intervention and reduce maintenance, says the company.

At Pratau facility, the membrane capacitive deionization system was set to reduce the incoming feedwater TDS by 60 percent. This allowed the company to cycle up the cooling tower, realizing savings in both fresh water usage and reduced wastewater production from blowdown. Due to feeding the cooling tower with water of a higher quality, they also were able to reduce their chemical usage.

It did not take long for the margarine manufacturer to see results from the installation of the IS-2, Brister says. After six months of operation, the manufacturer saw more than $13,000 (€12,000) in savings. After a year and a half, Brister points to other notable results, including: 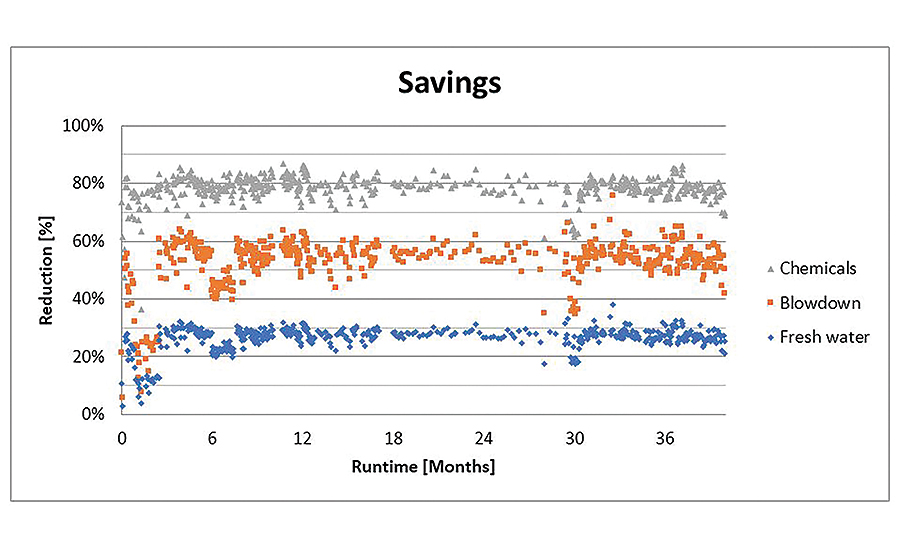 Figure 1. The graph shows the reductions in chemical, wastewater production and fresh water consumption achieved at the Pratau facility.

Figure 1 shows the reductions achieved in chemical, wastewater production and fresh water consumption. For the spreads manufacturer, membrane capacitive deionization proved to be a technology that provided quantifiable results over the long term. It also offered the manufacturer an environmentally responsible alternative to more traditional treatment systems. PC

*Editor’s Note: At the time of writing, Unilever owned the Pratau, Germany, facility. In July 2018, Unilever sold its spreads business, including the Rama, Becel, Lätta or Sanella, to KKR, a global investment firm. The Pratau location, with more than 200 employees, had been part of Unilever since the 1930s.