In countless process facilities, power plants and oil fields across the country, machinery is hard at work producing materials, electricity, oil, gas and other goods that keep the U.S. economy humming. The sophisticated microprocessors, PLCs and variable-frequency drives to keep equipment working within specifications are packed into enclosures of various NEMA ratings. Power densities have increased as enclosure volumes have gotten smaller, leaving little room for heat dissipation. Tightly packed enclosures and panels restrict airflow, resulting in rapidly rising internal temperatures, thermal runaway and increasing control failures. Keeping a cool head — and an enclosure cooler — can avert a lot of problems regardless of what the enclosure components are controlling.

Thermal testing has proven that natural convection cooling is inadequate for small, high power-density enclosures. Forced convection, or fan cooling, can provide heat transfer rates that are 10 times that of natural convection. In plants where ambient temperatures often exceed 90°F (32°C), however, this is still insufficient. Most manufacturers of electronic components specify maximum operating conditions of 104°F (40°C) and 90 percent humidity for proper operation.

In NEMA-rated environments, forced air is commonly considered a standard feature because fans are relatively inexpensive and easy to install. However, the ambient factory air pulled into the enclosures by the fans often contains nearly invisible oil aerosols and other contaminants that can coat the surfaces of the sensitive, expensive electronic boards housed in the enclosures. Refrigerant-based air-conditioning, another common option considered, can be large, expensive to purchase, requires regular maintenance, and has maximum ambient temperature limitations.

Regardless of the cooling method ultimately selected, a good first step in determining how to solve your enclosure cooler problem is to determine what your heat load is. Enclosure cooler manufacturers and their local sales teams can help.

If a vortex cooler is selected, online heat load calculators can walk users through a series of questions to determine the heat load encountered based on enclosure dimensions, current cabinet temperature, compressed-air inlet temperature and pressure, worst-case ambient temperatures, location and color of the enclosure, and whether the enclosure is in direct contact with sunlight. Based on the entered data, the programs suggest cabinet cooler options to meet the parameters. 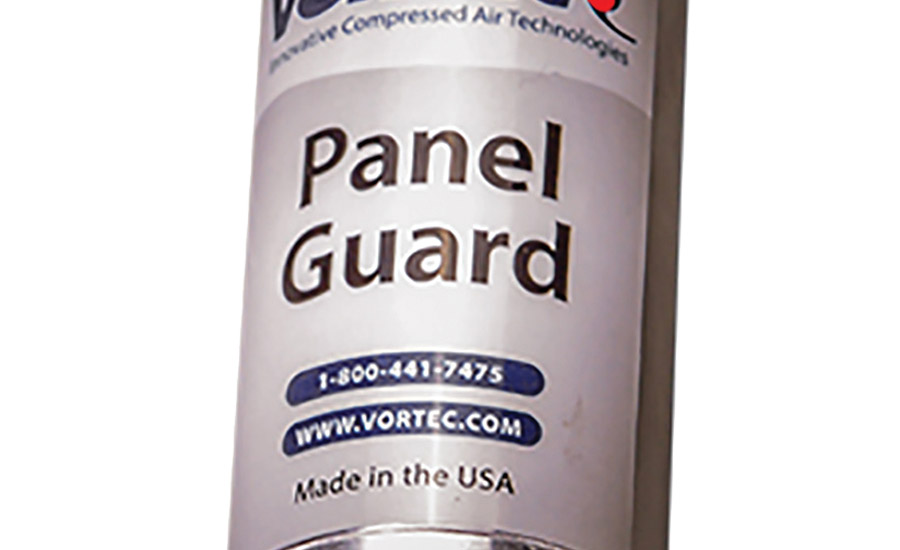 The enclosure cooler operates in environments up to 175°F and is thermostatically controlled.

Color Me Cool in Colorado

A case study can help illustrate how a proper enclosure cooler can keep equipment running reliably.

In a small corner of dry, arid Colorado, inside a small electric enclosure, a compact but highly advanced piece of technology is helping keep the power on for thousands of houses across a four-state region. The generation and transmission facility supplies power to dozens of power companies throughout Colorado, Nebraska, New Mexico and Wyoming, producing more than 11 million megawatt-hours of power through coal, natural gas and renewable sources.

Thousands of miles of cables, hundreds of workers and dozens of facilities and power plants transform coal, gas, wind and sun into usable energy in an ongoing chain reaction of processes. One glitch in that chain can slow down energy production and cause undue strain on other sources to compensate.

Cleaning Coal: A Hot Job. One link in that chain is a 1,120-acre plant containing three coal-fired units with a combined output of 1,303 MW. Due to widening awareness of climate change, coal-fired plants are becoming increasingly regulated.

Many coal stations use selective catalytic reduction (SCR) reactors to comply with environmental regulations. SCR reactors use active catalysts to promote a chemical reaction that changes nitrogen oxides (NOX) into nitrogen and water. One of the products used in the process is ammonia, which if released, can cause more serious problems than the NOX itself. Software accurately controls the entire operation and maintains the delicate balance, ensuring the safety of the process and plant. 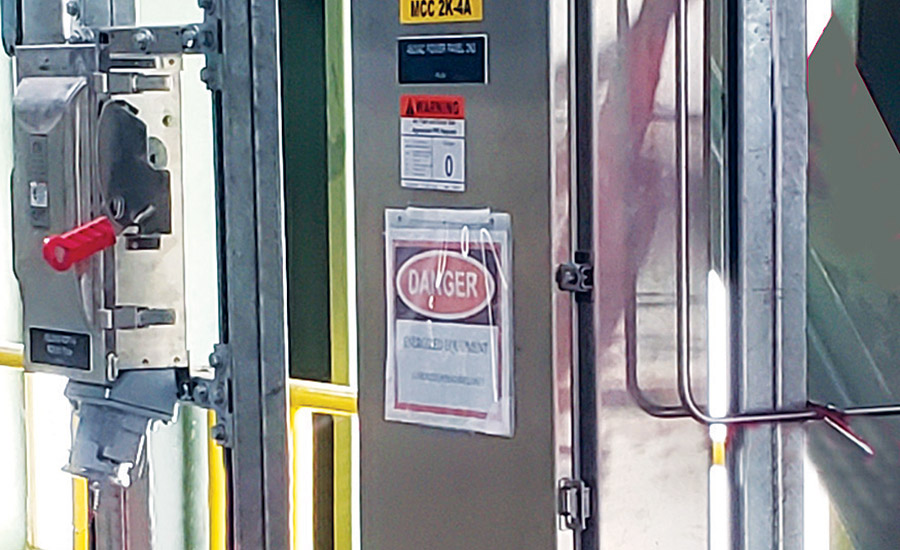 In the summer, temperatures at the power plant peak above 100°F — hot enough to trip the circuit breakers for the fans. To solve the problem, an enclosure cooler was purchased and installed.

Heat from the flue gas contained within the ductwork and reactor can cause irreparable damage to the sensitive multi-function electronic drives and servers that run the process. In order to keep the plant at a safe temperature for workers and electronic equipment, fans are installed in the ceiling of the plant to ventilate the enclosure and to cool the drives in the summer and keep them warm in the winter.

Fanning the Fans. Of course, the fans need protecting as well. Hot air rises, and the fans are at the highest point of the facility. Moreover, they generate heat themselves. The SCR plant is a closed, insulated building, and temperatures regularly reach 90°F. The fans and circuit breakers are located about 190’ above grade on the same elevation as the flue-gas ductwork.

In the summer, temperatures peak above 100°F — hot enough to trip the circuit breakers for the fans, creating serious operational problems. When the fans go down, the temperature skyrockets above 100°F, limiting the time employees can safely spend in the area and potentially creating costly SCR downtime.

Tasked with keeping the fans and the operation running, the project team got rather creative. The electrician opened the 480 V panel doors and positioned an air-conditioner within a foot of the open enclosure. The team then shielded the area with an industrial curtain to contain the cool air. While this kept the operation running, it was cumbersome and costly. 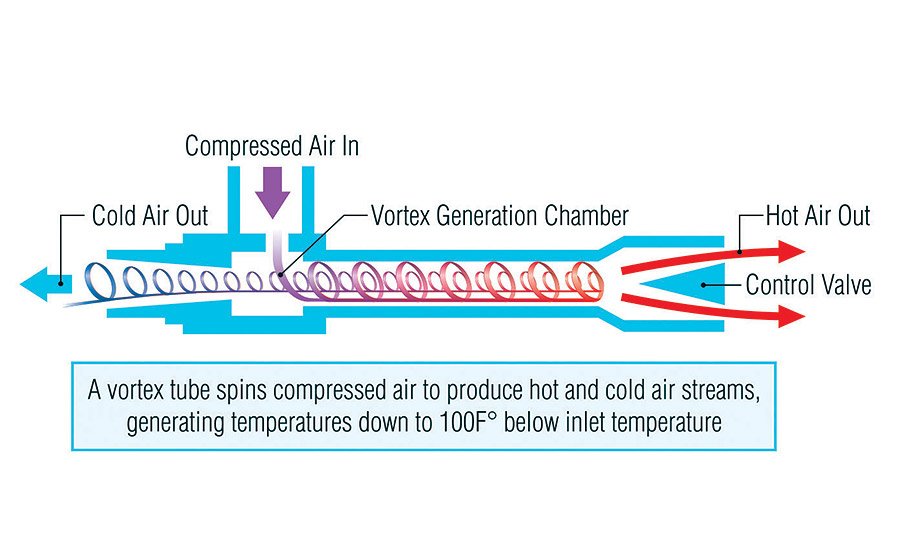 As an alternative, the team purchased and installed a panel enclosure cooler. Since then, it has been keeping the panels cool and continuously operating without the need for the air conditioners or blankets.

The panel enclosure cooler is designed around the vortex-tube principle, providing a device with no moving parts. Vortex tubes convert compressed air to a low pressure cold air source to keep electronic enclosures and panel components protected. A compressed airstream enters the vortex tube, where it spins rapidly, splitting into hot and cold airstreams.

Cooling performance is adjusted easily by changing the inlet air pressure or by changing the generator in the tube itself. Vortex-tube enclosure coolers also maintain a slight pressurization in the cabinet to keep circuit breakers clean and dry.

Since installing the cooler, the plant electrician reports that the fans’ circuits have not tripped and the fans have been keeping the SCR facility cool and comfortable.

Keeping the circuit breakers cool is just one small step in a long series of processes that powers thousands of homes across the West. The fans in this generating and transmission SCR facility have a tough job. Luckily, they have a reliable enclosure cooler keeping their circuit breakers within an optimal temperature range to prevent tripping and overheating. PC

Reliable Protection of Electronics in Ordinary or Hazardous Locations

Steve Broerman is an applications engineer with Vortec. The Cincinnati, Ohio-based company can be reached at 800-441-7475 or visit www.vortec.com.

Reliable Protection of Electronics in Ordinary or Hazardous Locations

How to Improve Enclosure Cooler Performance