An automobile manufacturer revamps its process cooling loop and continues to grow with the help of new cooling towers.

When compared to space cooling, process cooling — or the removal of heat from the fluid that serves water-cooled equipment used in a manufacturing process — is a bird of a different feather. Interesting though — and the source of some fascination among those in the cooling trade — is that much of the equipment, tools and techniques remain the same.

Larry Moore, a mechanical engineer at Envelop Group, explains that designers of process cooling loops must have an intimate understanding of every component in the system. The manufacturer’s representative firm, headquartered in Indianapolis, is the parent company of Validated Custom Solutions and Open Control Systems, companies that focus on equipment and controls specification, respectively.

Moore designed his first process loop in 1990. When he became a representative, he made it a goal to become the go-to “process cooling guy” in his territory. The biggest single loop he has designed is 9,100 gal/min. The facility it serves produces aluminum billets from scrap metal. Because the temperatures in the machines are so high, fail-proof cooling was needed — even in the event of power loss or catastrophic pump failure.

When it comes to designing cooling systems, design/build firm Envelop Group remains involved with a project from design through maintenance, training and consultation. It also stock replacement parts like pumps transducers and controls. In this way, the company is able to forge a relationship with manufacturers.

An example of how Envelop Group has been a continuing resource for manufacturers can be seen at TOA-USA in Mooresville, Ind. The manufacturer produces chassis and suspension components for Subaru. 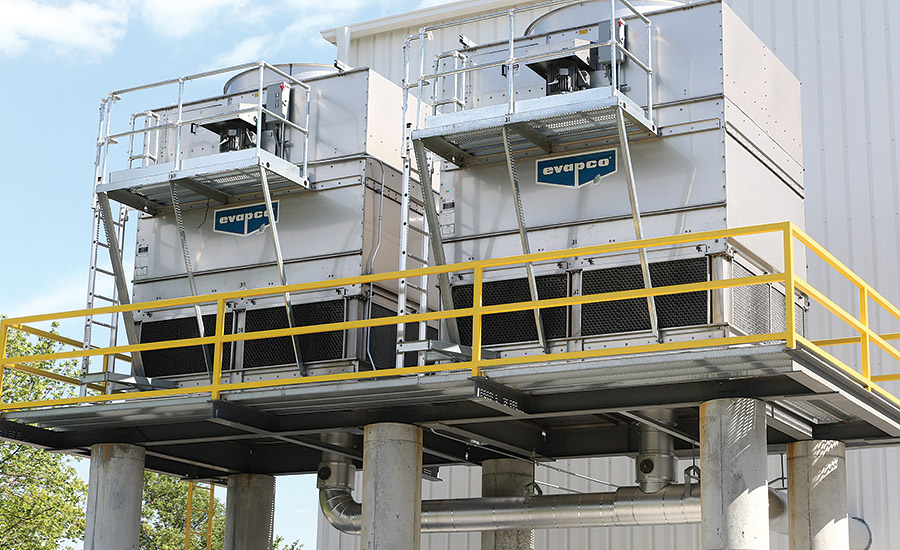 The first project at TOA-USA included a two-cell cooling tower for an existing plant process cooling loop that serves a variety of stamping presses.

What began as an inquiry about a single cooling tower replacement at the auto parts manufacturer evolved into a multi-building design/build project for TOA-USA. When Moore first visited the site, he assessed the need for a large cooling tower replacement on the existing plant process cooling loop that serves a variety of stamping presses. Albert Decker, the facility engineer at TOA-USA, showed Moore the aging galvanized cooling tower in place, noting the deterioration on both tower cells. The existing cooling towers were failing prematurely. To remedy the situation, Moore worked with Evapco Inc. to specify a two-cell, stainless steel counterflow cooling tower as a replacement. The stainless construction eliminated future concerns about the possibility of corrosion.

The AT Series counterflow tower was selected to replace the existing crossflow tower because of the potential to cut water consumption by as much as 75 percent. Fan horsepower requirements are typically lower in crossflow towers as well. Sized for 775 gal/min with 120°F (51°C) inlet water and 85°F (29°C) leaving water temperature, the new tower would be installed on the existing elevated dunnage. Only minor changes were required, and the new towers provide more capacity within the same footprint. The Evapco tower supplied for TOA-USA is certified by the Cooling Tower Institute, meaning the performance of the towers has been tested and verified. 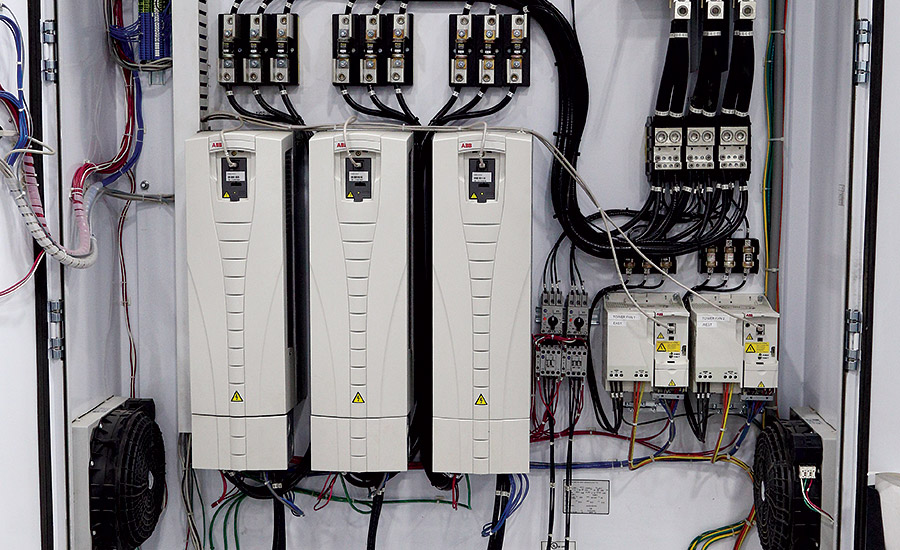 Harrell-Fish Inc., a union mechanical contractor in Bloomington, Ind., was hired to install the new cooling tower in addition to the components that serve it. Moore specified a pump skid built by ACS Group and custom Carel PLC control panels.

While the new units were being built, Decker wanted to learn more about the AT Series cooling tower. He and Moore visited Greenup, Ill., to see the new tower under construction at Evapco’s manufacturing plant. 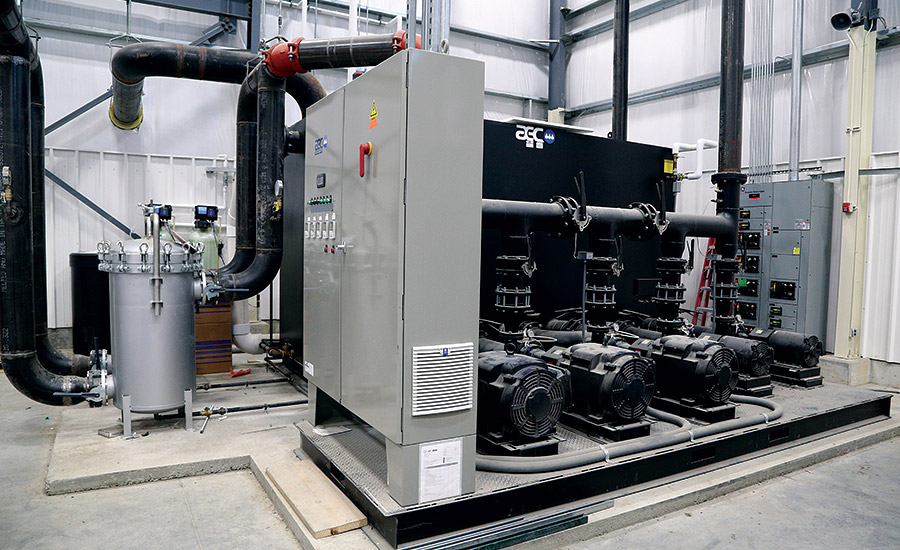 Custom pump skids like this one were used at various locations throughout the facility. They include a variety of pumps, a stainless steel hot well/cold well reservoir, control panel, discharge cooling tower and discharge process water header along with associated valves, sensors and alarm devices.

During the visit, Decker mentioned two major upcoming needs at TOA-USA beyond that of the first cooling tower replacement. His hope was that Envelop Group could design and supply process cooling equipment for a massive plant addition and offer makeup air solutions for the entire property. When the additions were complete, the plant would have nearly a half-million square feet under roof.

Based on the success TOA-USA had with the cooling tower replacement, the company’s management team wanted to bring the representative firm in on the design process for the plant expansion. 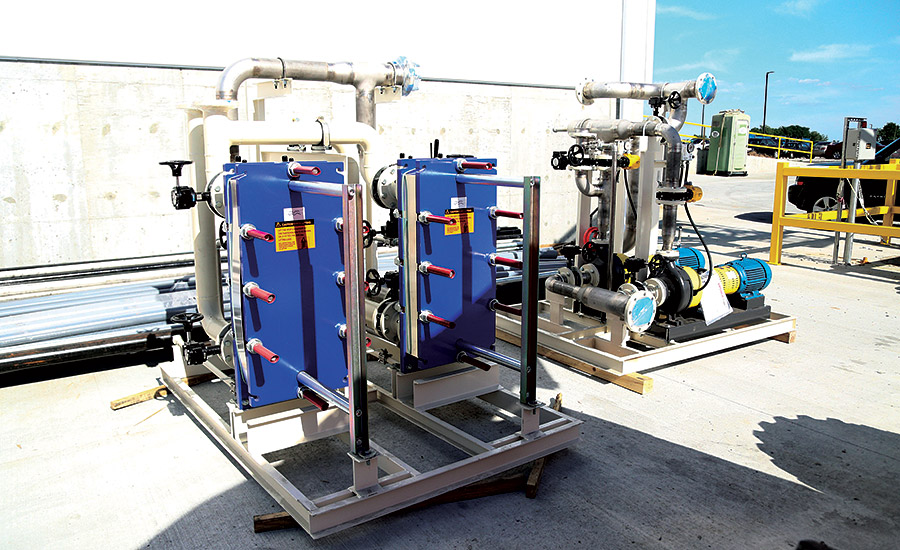 After several meetings with management at TOA-USA regarding the layout and size of the new process loops being designed for the expansion, the specification would come to include cooling towers for three new process loops along with another tower replacement in an existing space. Attention was simultaneously turned to indoor air.

The negative-pressure atmosphere inside the existing plant was obvious. Welding equipment and machine hoods had been added steadily over the years as the company grew — without an increase in makeup air supply.

Moore and others at Envelop Group formulated a plan to bring the existing plant up to AHSRAE 62.1 standards with numerous Innovent dedicated outdoor air systems (DOASs) installed on-grade. The same units were specified for the various plant expansions soon to come. This included an engineering analysis to determine the extent of ventilation needed. Meetings also were conducted with TOA’s selected construction firm, Force Construction Co. Inc., as well as Harrell-Fish Inc., the company that installed all mechanical components across the different phases. 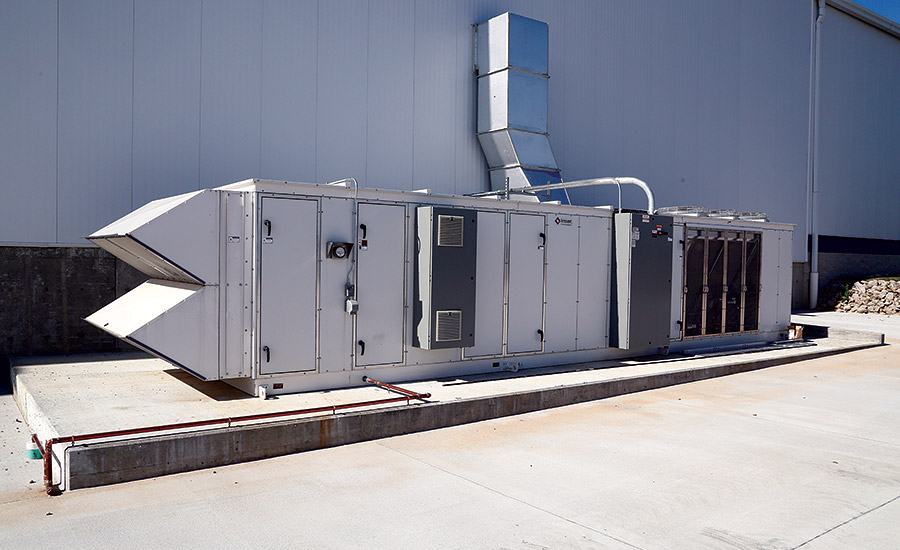 Ultimately, Envelop Group was able to secure the equipment order and control integration to accommodate each new addition: the new East Plant, North Stamping Plant and the new E-Coat Plant.

While the cooling towers that served the existing plant were a constant concern, the new ones are now merely an afterthought. Routine maintenance is performed and that is the end of the story, according to Decker and Moore. Within two years of starting the engineering process, TOA was in production on its new manufacturing lines.  PC