New technologies and new designs are changing — and optimizing — the future of industrial refrigeration and freezing systems.

Industrial refrigeration systems have long taken a standardized approach when it comes to their design and construction. Over time, industrial cooling trended toward no longer being engineered so much as replicated, using decades-old but proven designs. This was the case even for new facilities. Ultimately, the results were that industrial cooling systems were falling behind in terms of available technology.

Times are quickly changing, however, due to a host of factors. Facilities everywhere are facing higher average ambient temperatures. At the same time, facilities need to reduce energy use and minimize the climate impact of the refrigeration systems themselves.

This shift includes the environmentally critical natural refrigerant options. Natural refrigerants have increasingly proven their value and safety over the last decade. The move to higher-efficiency, leaner systems that rely on natural refrigerants like carbon dioxide (CO2) and ammonia (NH3), at times in low charge designs, will soon be the norm. In fact, as occurred decades ago when ozone-depletion concerns affected industrial process cooling as well as commercial refrigeration equipment designs, a shift in the refrigerants used may soon be required. Federal regulations and market demands — lodged as businesses respond to calls to be more environmentally aware and responsible — may change the type of refrigeration systems specified by processors. 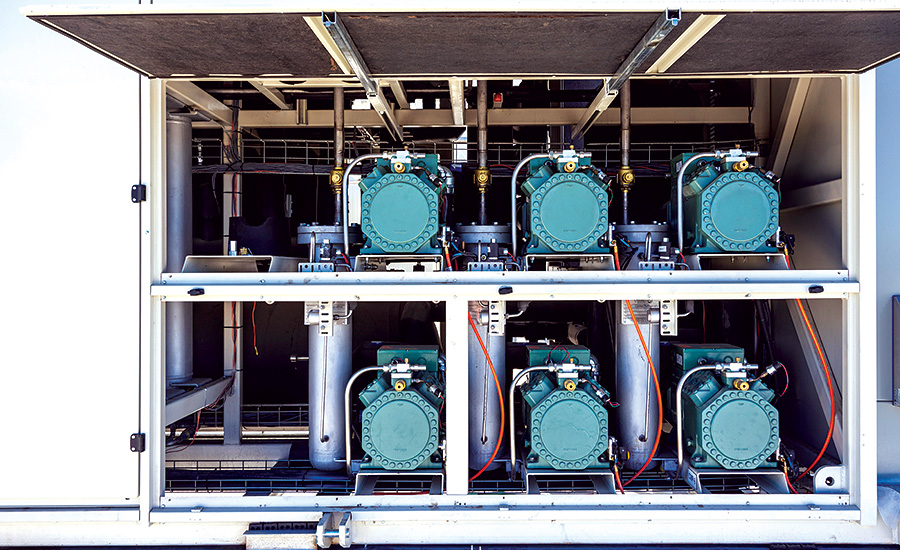 In the future, the refrigeration systems operated and maintained in many facilities will have key characteristics:

The increasing demand for high efficiency, low maintenance systems also will inevitably force a change in the typical approach to refrigeration systems. Drivers include objectives such as:

Many of these changes will even carry through to the facility design itself. In addition, the horsepower requirements and ongoing energy use of any refrigeration system will be impacted by environmental factors. These include:

All of these factors contribute directly to a refrigeration system’s initial design and long-term performance. 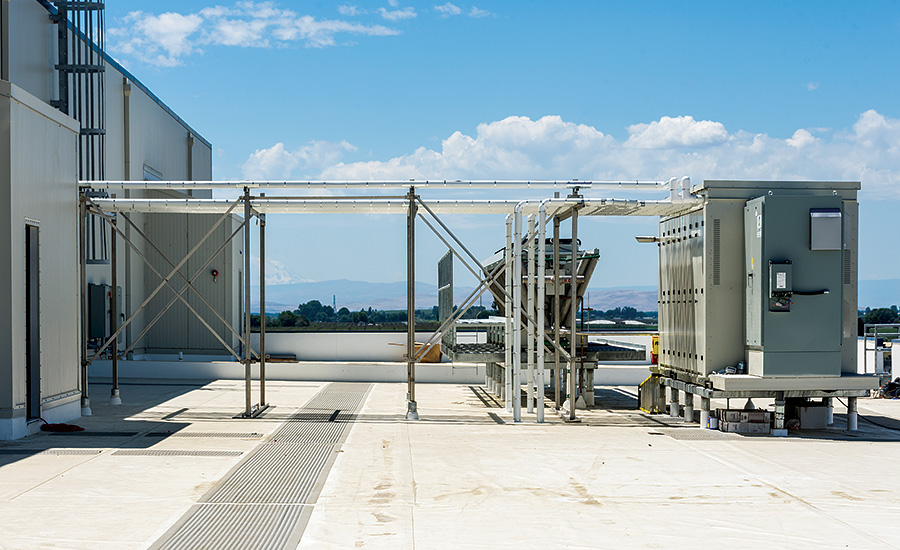 Another factor that facility managers will need to account for is lighting. The move to LEDs vs. older halogen and other less-efficient lighting for refrigerated facilities is a surprisingly important element in future system design and operation. LEDs are far more energy efficient. Also, they emit only a fraction of the heat of older systems. This, in turn, reduces the load requirements for the cooling system on an ongoing basis. In fact, it is such an important factor that it merits a quick look of its own.

Older facility lighting — halogens and metal halides — typically puts out a tremendous amount of heat energy. Also, because halogen and metal halide lighting is slow to warm up to full illumination — especially in cold ambient conditions — most facilities leave the bulbs on continuously. This continuous use imparts a significant amount of heat into the facility. As such, facilities with process cooling systems seeking to reduce energy use and optimize operations may want to include lighting as a key component of any comprehensive engineering solution.

Modern, industrial-grade LED lighting systems can help the performance and efficiency of the refrigeration systems. They emit just 10 percent of the heat of traditional warehouse or production facility bulbs for the same amount of light. In addition, they consume 90 percent less electricity.

Also, because LEDs instantly reach full illumination, they can be turned on only when the facility or specific areas are actually in use. LEDs can be activated by motion-sensors, timers or manually. As an added benefit for process cooling facilities, LEDs last many thousands of hours longer than halogens or fluorescents, so bulb replacement costs due to bulbs burning out are reduced. Likewise, LEDs will not shatter, and they lose little to no illumination power over time, which can improve maintenance time (and safety) as well. 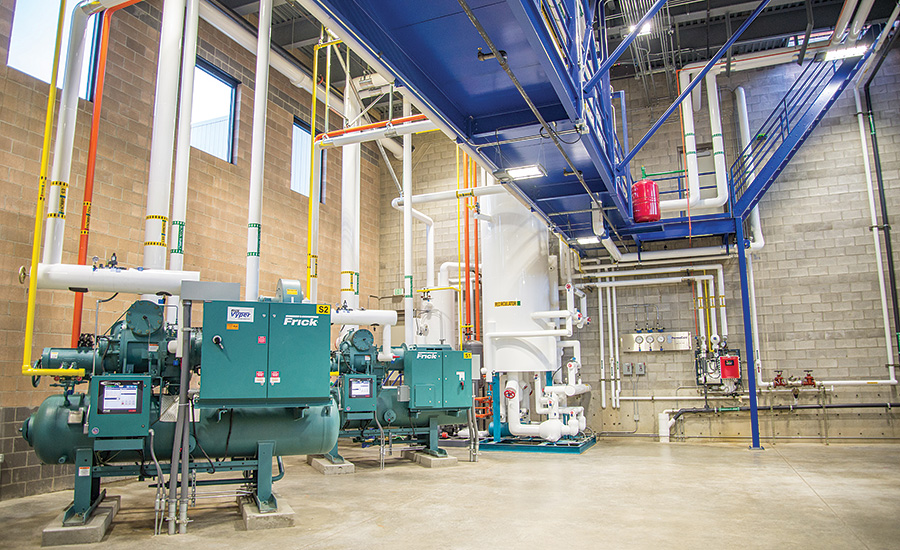 Optimization trends of current technologies for low charge ammonia (stick built) refrigeration systems are driving such systems toward reduced ammonia charges for every application. The key is the application of correctly engineered and sized equipment.

The new higher efficiency, natural-coolant systems themselves offer a range of solutions depending on facility needs and requirements. Here is a quick look at several of the systems you can expect to be working with in the future and some specifics on each type. 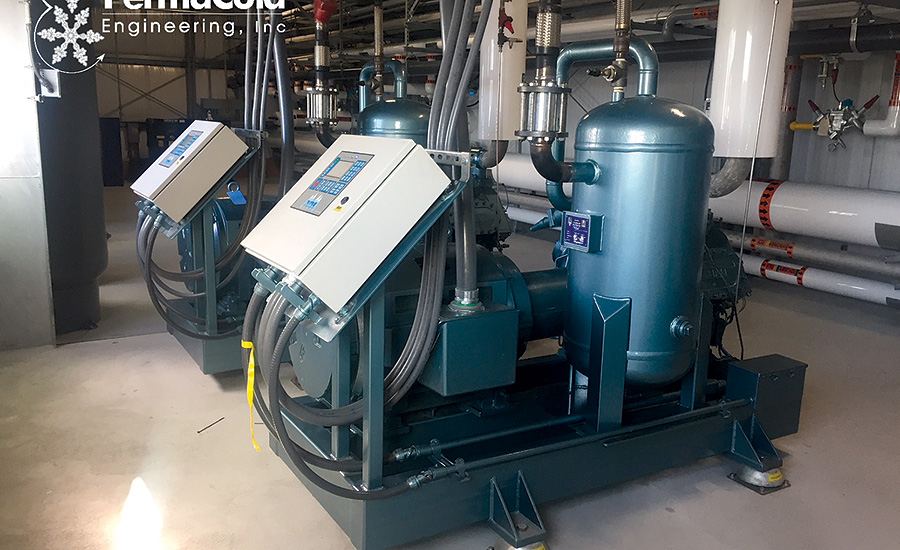 Cascade systems utilizing ammonia and carbon dioxide are an effective cooling solution for large industrial processes such as food processing facilities and cold-product manufacturing. Cascade systems are especially suited when temperatures reach below -40°F (-40°C). This type of system takes advantage of ammonia for the high side and keeps the CO2 subcritical. This allows systems designers to maximize the benefits of the carbon dioxide’s higher pressures and density to design in smaller equipment and higher efficiencies.

Transcritical CO2 systems are continuing to grow in capability and size. They offer a particularly great solution for cold-storage freezers.

Transcritical CO2 systems utilize racks of small compressors; however, as compressor technology allows them to become larger, the racks will in turn get smaller. Additionally, these systems commonly use hybrid heat-rejection systems called adiabatic gas coolers that utilize less water, send less water to the sewer and often require no chemical treatment of the water. Along with such systems, it is reasonable to expect to see improvements on the controls side. 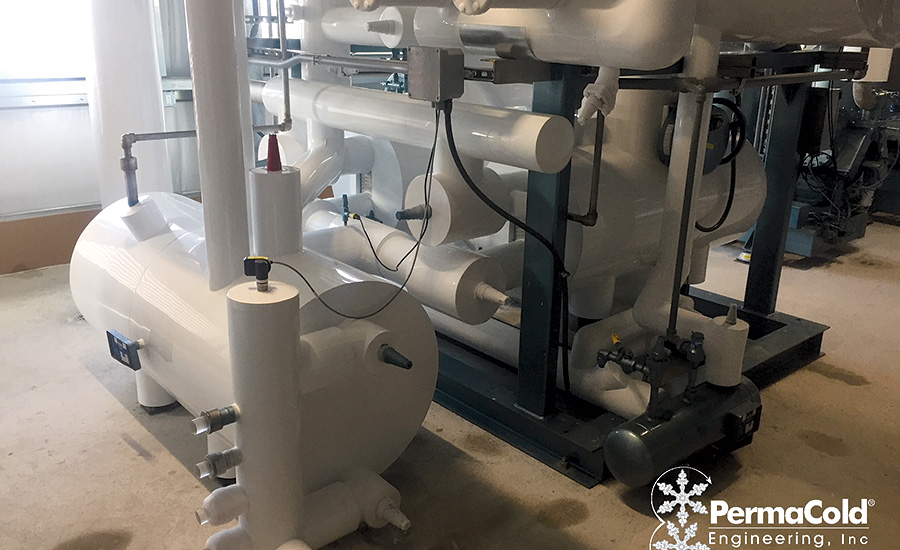 Optimization trends of current technologies for low charge ammonia refrigeration systems are moving toward reduced ammonia charges for every application. The key is the application of correctly engineered and sized equipment.

Overall, stick-built low charge ammonia refrigeration systems will operate like a typical ammonia system in use today with key exceptions: All components will be smaller and a large high pressure receiver typically will not be used. More precise engineering will mean the ammonia charge is no more than necessary to operate the system.

Expect these systems to continually be optimized, utilizing less refrigerant while becoming more efficient and getting smaller at the same time. 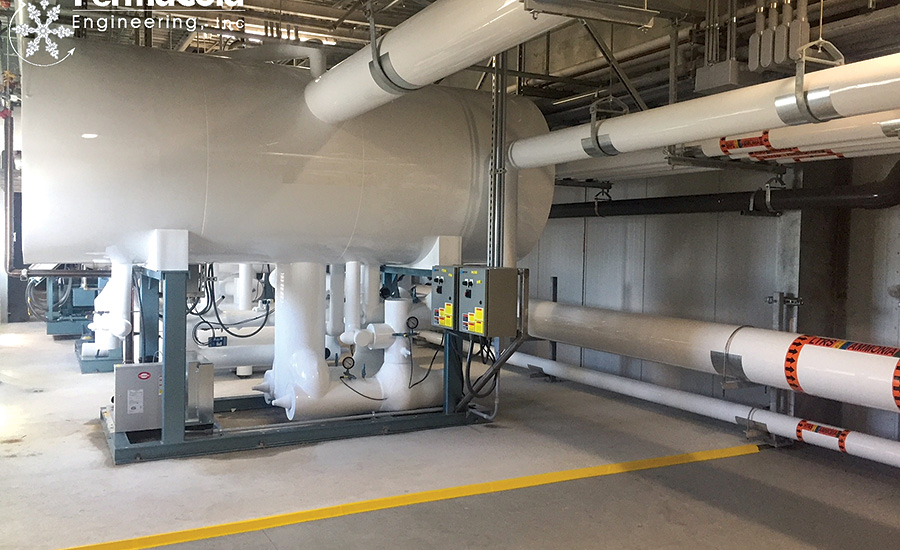 Cascade systems utilizing both ammonia and carbon dioxide offer an excellent cooling solution for large industrial processes such as food processing facilities and cold-product manufacturing. Ammonia/CO2 cascade systems are especially suited for applications where temperatures reach below -40°F (-40°C). This type of system takes advantage of ammonia for the high side and keeps the CO2 subcritical. This maximizes the benefits of the carbon dioxide’s higher pressures and density to allow smaller equipment and higher efficiencies.

Packaged low charge ammonia refrigeration systems offer the benefit of faster installation and are excellent for cold storage in high ambient temperatures and coolers. They also eliminate the need for an engine room; instead, they use localized systems.

As the name indicates, the charge for these systems typically is lower, and the systems are even smaller than stick-built ammonia systems. Some employ special feed and control techniques to keep the charge to an absolute minimum. In practice, these systems will often appear as a sort of miniaturized engine room located on a facility roof or on a concrete pad outside.

In conclusion, these trends in system design are the wave of the future — but only in the sense that they are not yet widely in place. Part of this is due to the fact that system designers and engineers are still pushing back against change and not actively working to employ these new approaches and technologies.

Many industry insiders, however, believe this industry-wide shift will take place and is in fact already building momentum. Such professionals assert the higher efficiency systems described will become the industry norm sooner than most expect. For those involved with specifying process cooling systems, or their operation and maintenance, now may be the best time to get ahead of the curve in learning about these new approaches as well as all the benefits that they provide. PC