Careful selection of the heat exchanger technology for the process aids in efficient evaporation operations.

When treating wastewater, sludge and digestate, it often can be beneficial to reduce the volume of material or increase the solids content as well. Mechanical dewatering via a centrifuge or belt press — to separate solids and liquids — is standard for the water treatment and anaerobic digestion sectors. But, what if you want to further reduce the water content of the remaining liquid fraction?

The two main reasons to remove or reduce water from effluent and waste are:

Traditionally, there have been two ways to achieve this: drying and evaporation. Drying usually requires large quantities of heat and energy, is costly and inefficient and is unsuitable for materials with high water content.

Evaporation differs from drying (and dehydration) because it produces a concentrated liquid rather than a solid. Evaporation also produces a higher concentration of solids in the resulting liquid than some other methods of concentration such as reverse osmosis and ultra-filtration.

Evaporation can be used as the initial step in producing a dried product if the liquid concentrate then undergoes a drying process such as spray drying. Conventional evaporation techniques require temperatures in excess of 212°F (100°C), which is usually provided by boiling water or steam. Due to the low temperatures used in wastewater treatment and aerobic digestion, however, such energy is not usually available without additional fuel inputs, making evaporation a high energy option.

It should be remembered that, scientifically, evaporation and boiling are two different processes. Evaporation rates depend on a number of factors and not just the temperature of the fluid. That said, most commercial waste-evaporation systems actually boil off the fluid even if they are operating well below the normal boiling point of water at 212°F (100°C).

Heat exchangers are capable of recovering heat from other sources and using this as the basis for an evaporation system. This can further improve overall process efficiency. Additionally, using a vacuum in the system to reduce the boiling point minimizes the amount of energy required.

Combining systems into a multiple-effect evaporator allows larger quantities of water to be removed for the same initial heat input. Each evaporator is held at a lower pressure than the previous one. Because the boiling temperature of water decreases as pressure decreases, the vapor boiled off in one vessel can be used to heat the next. As a result, only the first vessel requires an external source of heat, which can be taken from another process elsewhere or generated specifically for the purpose. 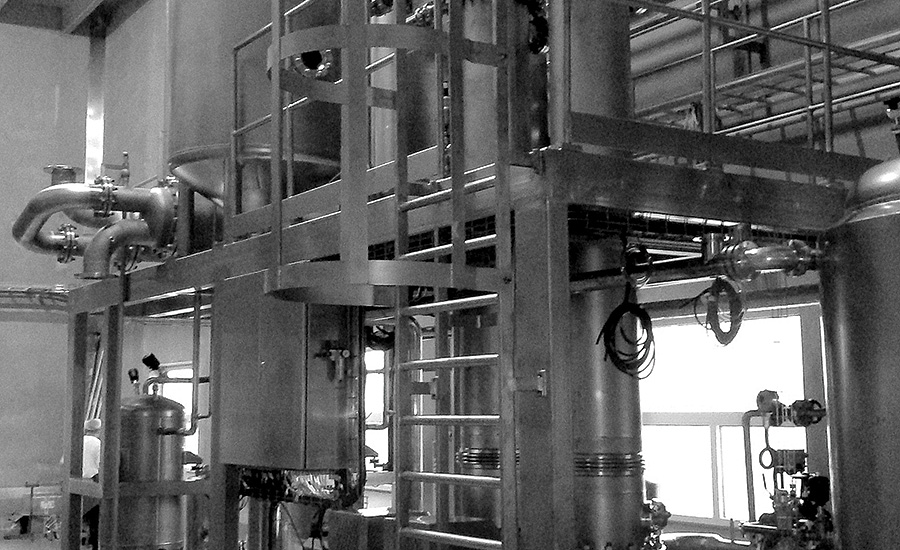 These heat exchangers are being used for low temperature evaporation.

Selecting a Heat Exchanger for Evaporation

The type of heat exchanger used for evaporation will depend on the nature of the products being treated. For materials with low or medium viscosities such as wastewater and effluent with low concentrations of organic solids, using a tubular heat exchanger as an evaporator module provides high heat transfer rates with good resistance to fouling. Things to look for include the tube architecture — corrugated tubes are more efficient than smooth tubes and are less susceptible to fouling — and the materials used in its construction. For example, stainless steel provides long-term resistance to corrosion and aggressive chemicals while also providing the necessary thermal properties.

For more viscous materials such as thicker effluents, digestate and solids with higher dry-matter concentrations, the use of a scraped-surface heat exchanger may be necessary. These generally either operate with a rotating (screw-type) or a reciprocating (back-and-forth) type mechanism. Scraped-surface heat exchangers reduce fouling and maintain heat transfer rates (and, therefore, operational efficiency) by continually, mechanically removing product from the tube walls to prevent fouling. In some installations, units with a reciprocating design have been shown to be effective in sludge-evaporation applications.

While both designs of heat exchanger are commonly used in the type of multi-effect evaporation system described, both heat exchanger types also can be used in other forms of evaporators. These include mechanical vapor recompression (MVR) or thermal vapor recompression (TVR) systems, depending on the needs of the product or application. In MVR setups, the evaporated steam is sent to a compressor, where it increases in pressure and temperature. The steam is used as the thermal energy source in the evaporation process. Only electrical energy (for driving the compressor) is used in this case.

By contrast, in TVR setups, boiler steam can be mixed with evaporated steam in a thermo-compressor. This leads to considerable energy savings. Combinations of multi-effect evaporation and steam compression (MVR or TVR) can be used to further increase the energy efficiency of an evaporation process. 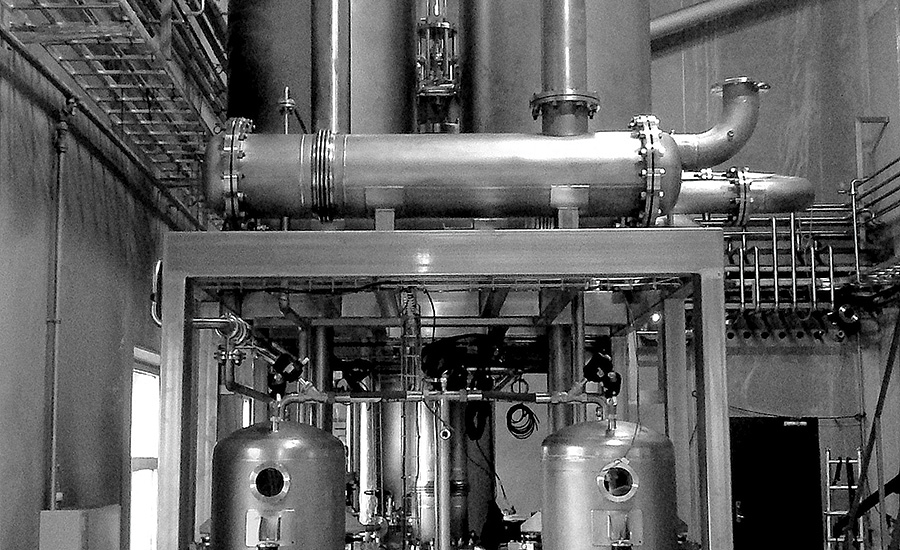 Combining systems into a multiple-effect evaporator allows larger quantities of water to be removed for the same initial heat input.

One way to assess and compare the performance of different evaporation systems is to compare the amount of water evaporated per unit of steam consumed — known as the steam economy (SE). This is commonly expressed as the ratio of water evaporated to steam consumed. SE ratios for conventional single-effect evaporators are usually just under 1.0 (0.90 to 0.98) while for a multi-effect unit combined with MVR, SE ratios of 10.0 or greater can be achieved.

Heat exchangers for low temperature evaporation also can be incorporated in an integrated unit to process materials. One example is concentrating the digestate produced by anaerobic digestion using a purpose-designed system. This uses multiple evaporation effects to increase the solids present in liquid digestate. Whether you want to minimize effluent and digestate volumes using such a system or simply reduce them in a more energy efficient way, heat exchangers can provide a low temperature evaporation solution to achieve the required results. PC