In the 1960s, the steel production industry sought a way to filter the cooling water used to cool steel production. During production, both free solid material from the line, and residual oils from previous formation steps, would be on the materials being cooled. This oil and particulate would migrate to the cooling water during quenching and other cooling operations. To reuse the water, this material had to be removed via filtration.

Originally, sand filters were used on cooling-water lines. When the sand was exposed to oil, however, it stuck together. This reduced filtration effectiveness, and the fouled sand required replacement prematurely. (After all, mixing sand and oil while adding heat is basically the recipe for producing asphalt.) Because these filters typically operated at elevated temperatures, the use of sand became problematic.

As an alternative, the steel industry looked at walnut-shell filters for filtering the cooling water. Crushed walnut shells were selected as a media replacement for sand filters because walnut shells have an affinity for oil. Yet, when vigorously backwashed, the crushed shells also released the trapped oil.

Early in the 1970s, the oil industry discovered the benefits of walnut-shell filters. The increasing volumes of water that the industry was using — exacerbated by the rise of water-intensive, enhanced oil-recovery processes — meant that producers could save money by removing oil from produced or flow-back water. Most oil producers either reused or disposed of the filtered water.

The walnut-shell filter was a good fit for these processes and became a widely used polishing filter. Over time, and with the development of more cost-effective and efficient filter designs, the walnut-shell filter began to be used in many diverse industries, from aluminum mills to the remediation of contaminated soil.

Walnut-shell filter manufacturers have tested and revised their designs many times, minimizing waste volumes while keeping the filter’s efficiency as high as possible. Most of these changes have come in the form of upgrades to the filter backwash.

When a walnut-shell filter is full of contaminants, it will backwash to remove the captured contaminants before returning to its normal filtration mode. Keeping the liquid waste to a minimum while removing all contaminants is the goal of the backwash method and regeneration optimization. 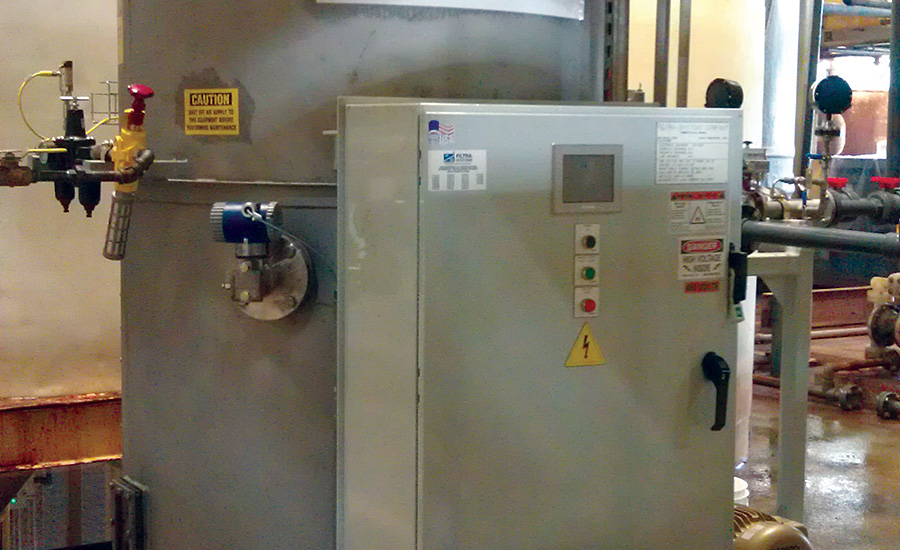 A walnut-shell filter in an atmospheric vessel is used for this cooling-water filtration application.

Early walnut-shell filtration designs used a pump to remove the shells from the vessel. Issues with this approach were a much larger footprint and a shorter operating lifespan for the shells. Other early designs used air sparging, which required large air compressors and resulted in less media fluidization.

Many modern walnut-shell filters use a mixer to agitate the shells. The mixer eliminates the issues found with earlier designs. Design validation via the continuous-stirred tank reactor helps ensure full contaminant removal and cleaning of media bed and vessel.

Other filtration design advances include the ability to build nutshell filters using atmospheric tanks. Most of the early uses of walnut-shell filters required pressure vessels with rigorous design criteria, but this is not the case for every industry. While oil and gas installations typically require ASME-stamped pressure vessels, many process cooling jobs do not.

Tire Manufacturer. A tire manufacturer in Ohio has a closed-loop steam boiler water circuit. Process water from the steam boilers is used to quench the rubber products (mainly tires for automobiles). For this process, the water must be kept around 140°F (60°C) and be reasonably free of debris. 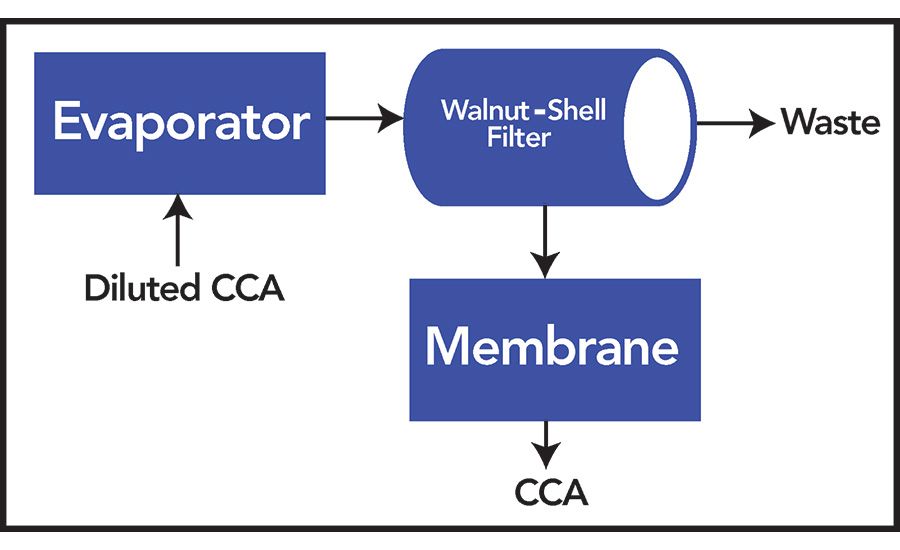 A process-flow diagram shows how the walnut-shell filter was added to the existing cooling-water filtration system at the cellulose producer to remove suspended solids and extend the life of the ultrafiltration membranes.

Next, the tire manufacturer revamped the cooling process to use city water. The city water needed to be brought to operating temperature, which resulted in high water bills and heating costs.

After the membrane-protection walnut-shell filter was installed, oil levels in the process water system were substantially reduced. The walnut-shell filter provided a 95 percent reduction of oil in the cooling water, which allowed the nanofiltration membranes to be reinstalled. Following the adjustments, the process is able to work as originally planned. Process water can be recycled at temperature, reducing city water demands and water-heating costs.

Cellulose Production Facility. The AV Cell facility in New Brunswick is a cellulose production facility. During cellulose production, contaminated condensate acid (CCA) is sent to the facility’s evaporators for waste disposal. Yet, the cellulose manufacturer knew that if solid contaminants were removed from the acid stream, it could be reused in the process. To do this, ultrafiltration membranes were installed. However, the free-solids levels in the CCA were too high for ultrafiltration to be an efficient solution on its own.