Technologies that reduce chemical use in process cooling water towers provide many benefits.

It is critical that process cooling systems relying on cooling towers have robust but cost-effective filtration equipment for water reuse. Cooling tower water frequently contains hazardous materials that should be managed to avoid reintroducing them into the process cooling equipment or system.

At the same time, it is crucial that any industrial process consider its impact on the local water supply. To protect the ecosystem, technologies that can reduce the chemicals used in process cooling water towers should be implemented wherever practicable. One technology that can help mitigate the use of water treatment chemicals is effective filtration via crossflow microsand units.

During cooling tower operation — in order to reduce the concentration of contaminants in the cooling towers for process cooling — a substantial amount of water must be discharged periodically. This discharged water, or blowdown, contains anti-scaling, anti-corrosion and anti-microbiological chemicals (used, not coincidentally, to control scaling, corrosion and fouling). The blowdown water typically is discharged into local sewage or storm-water systems. Due to the variation of chemicals used in cooling towers, it is not possible to quantify the exact amount of pollutants discharged globally. 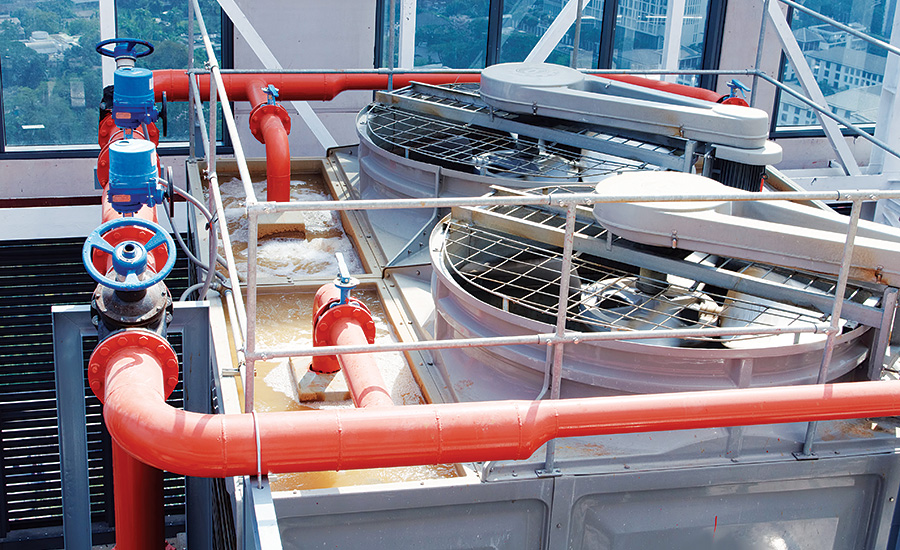 It is crucial that any industrial process consider its impact on local water supply. Technologies that can reduce the chemicals used in process cooling water towers can help protect the ecosystem.

Cooling towers absorb heat from water cooling systems and eject it into the atmosphere. Proper maintenance of cooling towers is essential for reducing bacteria and increasing efficiency. Bacteria such as Legionella as well as protozoans and algae can colonize in cooling tower systems.

As a global research organization — focused on advocacy for water, energy and other critical issues at the intersection of the environment and development — Eneref Institute examined the benefits of crossflow microsand filtration technology for process cooling waters.

Traditional deep-bed multimedia — or sand — filters in water cooling towers typically capture particles of 20 microns and above. While such systems can remove up to 90 percent of contaminant particles by weight, they leave unchecked all fine particles — the particulates most responsible for the fouling that supports Legionella and system inefficiency.

Crossflow microsand filtration technologies have become commercially available to treat the water in cooling towers used for process cooling. These systems can help minimize the spread of microorganisms while also reducing the need for chemical treatments.

Cooling tower water-analysis reports typically show that 95 percent of particulates are less than 5 microns in size. When measured by mass, however, 80 percent of the bulk is comprised of particles greater than 15 microns. Traditional filtration systems reduce the quantity of larger particles but not the smaller particles that cause fouling — demonstrating why parts per million (ppm) is an incomplete measure of total suspended solid (TSS) in water.

Crossflow microsand filtration systems differ from traditional-flow media filters in a number of ways. Rather than a simple vertical flow, water is crossflowed, tangentially, across the top layer of the media bed by an injector. The flow scours the media’s top surface layer, preventing surface blinding by lifting larger particles into suspension. The media bed then becomes a clean, free space in which fine particulates are trapped. In this way, crossflow microsand filtration technology allows for optimal use of the media surface area and removes particles down to submicron levels — smaller than one micron. Thus, the technology helps protect the cooling tower that is used for the process cooling by reducing the risk of fouling, scaling and corrosion. 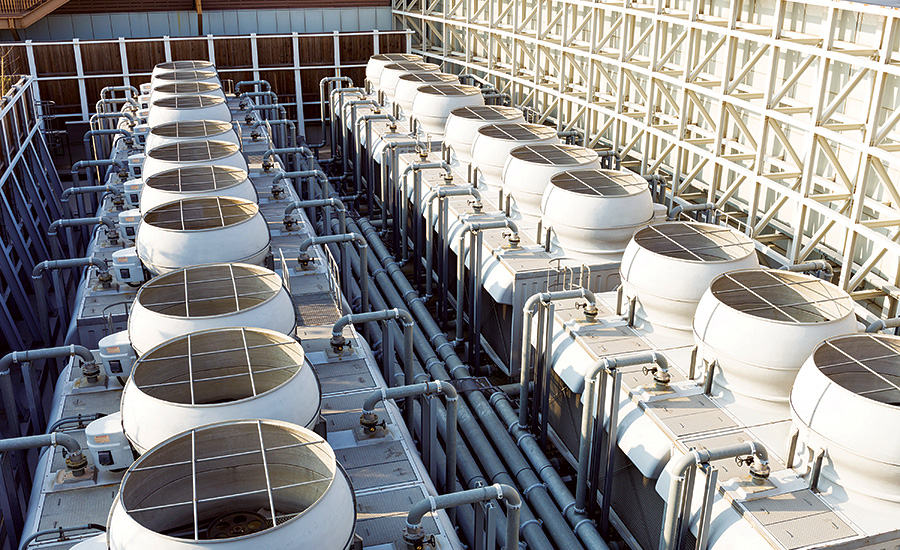 Cooling towers consume a great deal of water, and competition with agriculture, industry and municipalities will only exacerbate water scarcity concerns. An understanding of water filtration systems may help reduce the amount chemicals discharged into the environment.

Unlike total dissolved solids, total suspended solids (TSS) can be reduced by filtration. Reducing total suspended solids makes chlorine and other disinfectants more effective. This allows chemical treatments to be reduced by as much as 35 percent. Therefore, the rate of corrosion from oxidizing chemicals as well as the chemical odor are reduced. Furthermore, it may no longer be necessary to use coagulants to fuse and jettison small particulates.

In addition, reducing chemical use reduces material and labor costs. More significantly, lessening chemical use offers environmental benefits by decreasing the number of chemicals released into the ecosystem. 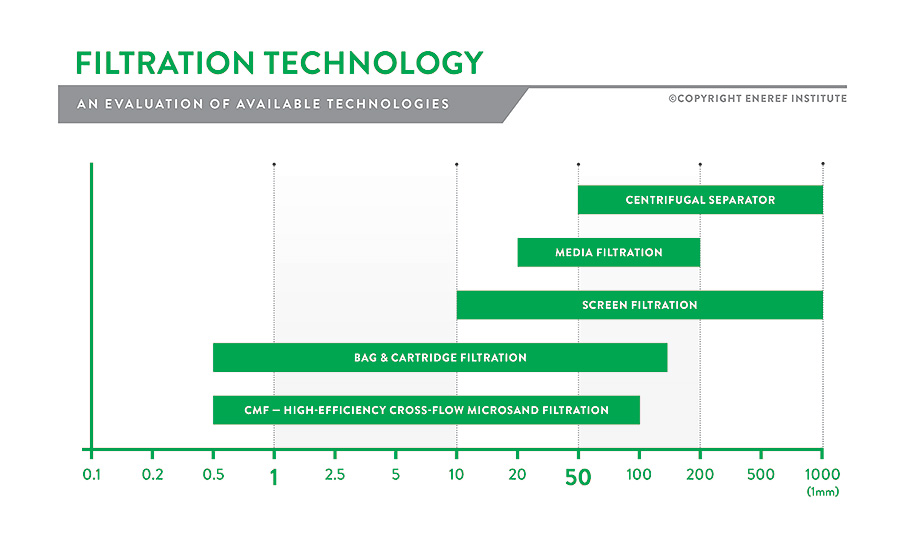 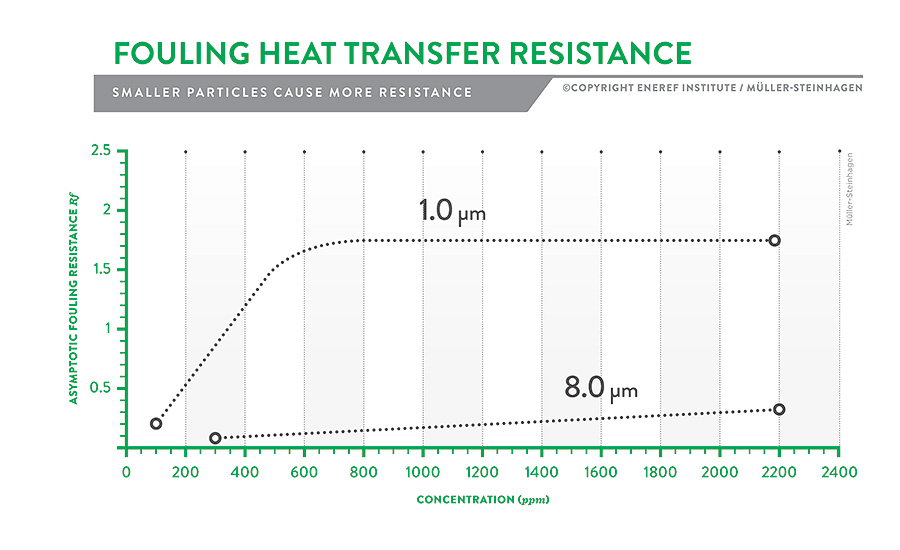 Fouling Particles. The rate of fouling is much faster when smaller particles are present in the water than it is when larger particles are present. This is why fine filtration is important. Because the surface of metal is jagged at microscopic sizes, fouling buildup primarily is dependent upon particle size.

Microbial Growth. While no filtration system eliminates Legionella, reducing fine particles can break up the shelters where microbes hide from disinfecting chemicals. In this way, crossflow microsand filtration technology helps maximizes the effectiveness of chemicals used to treat process cooling towers. They diminish the opportunity for microbes — including protozoa, algae, fungi and Legionella — to cultivate and multiply. Reducing fine particles also removes the nutrient source for bacterial growth.

Performance. Beyond savings in energy and water use, Eneref Institute found a significant number of crossflow microsand filtration users reported reduced maintenance of their heat exchangers. Users also reported that their process cooling systems operated for longer durations, uninterrupted, with minimal upkeep costs and at higher levels of performance.

In conclusion, saving water is a critical benefit of such filtration systems. According to the U.S. Government Accountability Office, 40 states expect water shortages (under average weather conditions) in some portion of their land within the next 10 years. Cooling towers consume a great deal of water, and competition with agriculture, industry and municipalities will only exacerbate water scarcity in the future.  PC

Obaidullah Mohiuddin, Ph.D., is an environmental scientist with Eneref Institute. The Doylestown, Pa.-based research and advocacy organization for sustainable development can be reached at 917-779-8600 or visit eneref.org.