Thermal spray coating is an industrial coating process that consists of a heat source (flame or other) and a coating material (in powder or wire form). The coating is melted into tiny droplets and sprayed onto a surface at high velocity. Upon impact, a bond forms with the surface. Repeated passes build up the thermal spray coating and form a layered structure.

Thermal spray coatings are used in industries such as aerospace and power generation. The trend toward more heat-intensive processes, however, has exposed the inadequacy of current cooling solutions and highlighted the need for better thermal management of the coating process.

High velocity oxygen fuel (HVOF) thermal spray is widely used for coating critical wear parts like landing gear, bearing races, valves and turbine components. In HVOF, a significant amount of thermo-kinetic energy is required to deposit a dense coating onto the work surface. A portion of this energy, manifested as heat, is absorbed by the workpiece. Improper temperature control during thermal deposition can lead to:

All can occur due to damaging stresses that result from mismatched thermal expansion coefficients between the coating and substrate.

Consequently, thermal management of the workpiece is extremely critical for the spray-deposition process. Compressed-air jets are the primary cooling method for most HVOF thermal spray operations; however, air cooling often is insufficient. Oxygen and moisture present in the cooling air are detrimental to the coating quality.

In spray operations involving tighter temperature control, even with an air-cooling solution, manufacturers often are forced to introduce breaks in the process cycle so that the accumulated heat can dissipate into the ambient environment. During these cooling breaks, the spray gun is moved away from the part but continues firing, resulting in wasted feed powder, process gas and booth production time.

Another issue affecting productivity in spray-coating operations is the setup time for masking and demasking. It is important to mask certain areas of the part where the coating is not needed. The desirable characteristics of a masking tape are flexibility, ease of application and removal, quick cleanup and extended useful life. A variety of masking tapes are available with materials of construction such as fiberglass, polymer and silicone rubbers, and metals. Metal tapes usually are difficult to make and install. While the fiberglass and polymer tapes offer ease of installation, they are difficult to remove and require extensive post-spray cleaning. Inadequacy of air cooling and temperature buildup are the primary reasons for tape degradation (e.g., thermal decomposition, hardening or tape embrittlement). 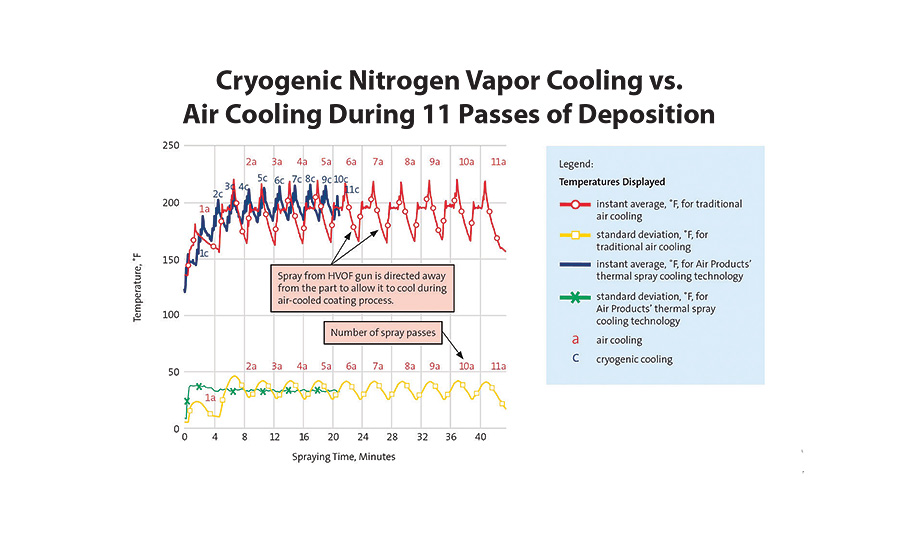 The search for an efficient cooling approach to generate better coating properties as well as to improve the productivity of HVOF spray-coating operations has led to the development of cryogenic gas cooling (figure 1). Cryogenic cooling methods offer a significant enhancement in the ability to remove heat quickly. They have been rarely used in the thermal-deposition coating industry, however, due to the risk of nonuniform cooling, which results in variable levels of residual stresses at the substrate/coating interface. Such nonuniformly cooled areas are subject the same issues of coating delamination and spalling.

Carbon dioxide (CO2) cooling has been used by the industry with mixed success. While CO2 has higher heat capacity compared to nitrogen, its heat-removal rate is constrained by the smaller temperature differential. (Carbon dioxide has a boiling point of -109.3°F [-78.5°C] while cryogenic nitrogen boils at -320°F [-196°C]). Carbon dioxide also has the tendency to form undesired CO2 snow at the target surface whenever higher cooling rates and correspondingly higher gas flow rates are required.

Cryogenic nitrogen vapor cooling has been shown to improve productivity over conventional air-cooled processes (figure 2). By eliminating the inter-pass cooling breaks, the cryogenic nitrogen vapor-cooling system helps to shorten the spraying time by as much as half and to reduce wasted feed powder and process gases. This cooling system also allows for tighter temperature control (±20°F [±11°C]) and a smaller standard deviation in workpiece temperature during coating operation.

Subsequent characterization of the traditional air-cooled and cryogenic nitrogen vapor-cooled samples shows that the bond strength, hardness and surface roughness of the as-sprayed coatings were essentially unchanged while micro-porosity was reduced from 0.2 to 0.05 percent (figure 3). The cryogenic nitrogen-cooled sample also retained the substrate hardness (420 HV in the case of heat-treated 4340 steel) better than the air-cooled (395 HV) and non-cooled (390 HV) samples. In addition, oxygen pickup and carbon loss in the coating were the lowest for the cryogenic nitrogen vapor-cooled sample because of the rapid cooling and low oxygen concentration in the surrounding atmosphere. In the tests with cryogenic cooling involving WC-Co-Cr powder, deposition efficiency was shown to increase by an average of 10 to 15 percent over conventional air cooling and by more than 30 percent over non-cooled samples.

An additional benefit of the cryogenic nitrogen vapor-cooling system is the time and cost savings in the masking process. The cryogenic gas provides instant cooling of the hot top layer of the mask, avoiding heat buildup and preventing the heat from reaching the bottom layer of the tape. As a result, the tape bulk stays flexible and can be removed quickly with a putty knife following the spray operation, leaving a clean, residue-free surface. The tape also can be reused several times. 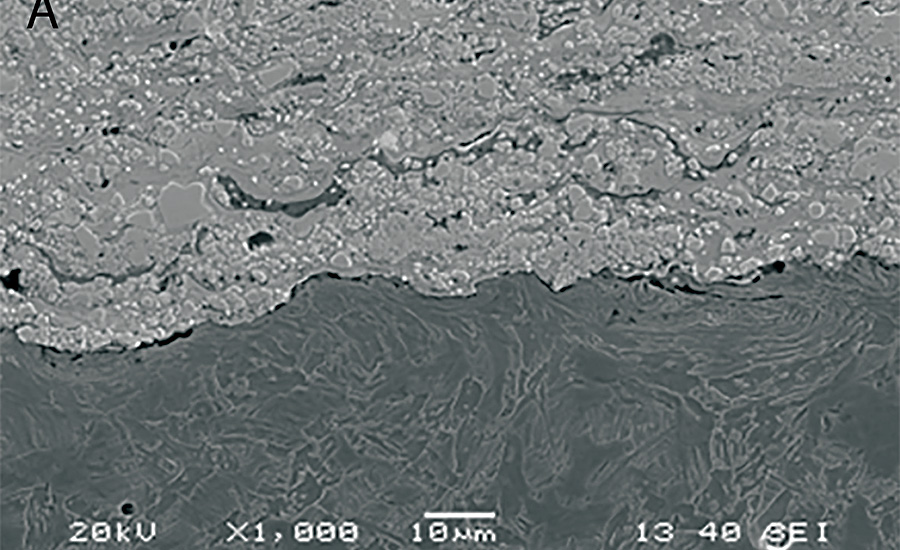 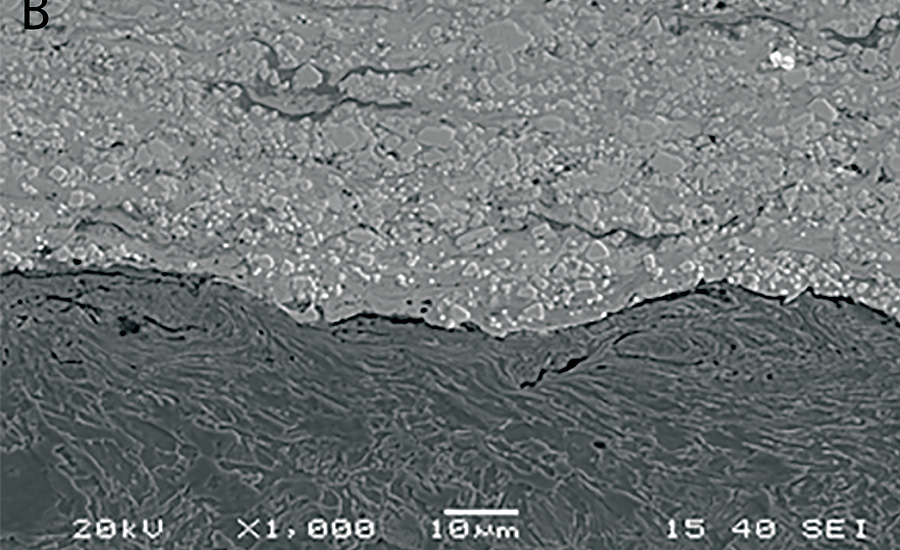 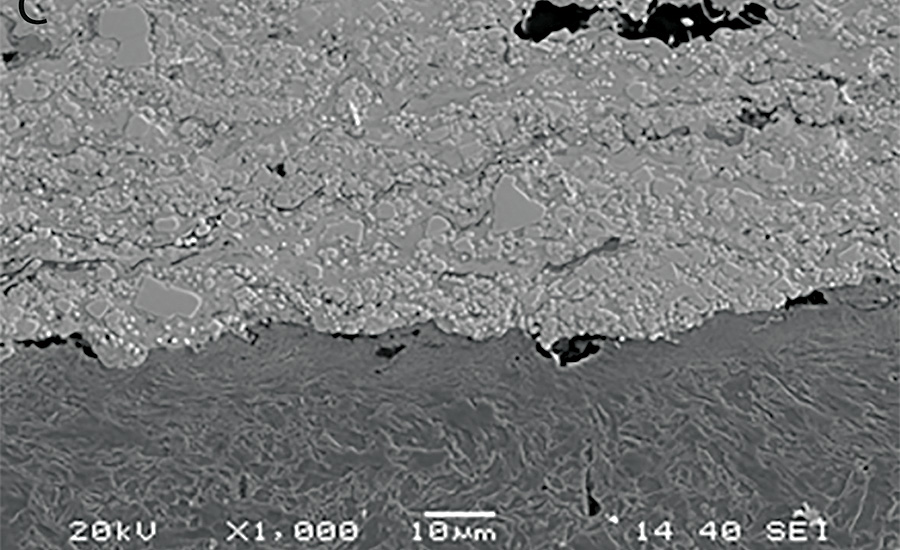 Figure 3. The effect of air-cooling (top), cryogenic nitrogen vapor cooling (center) and no cooling (bottom) are shown on the microstructure of thermal spray bonding area.

The cryogenic nitrogen vapor-cooling system efficiently and uniformly cools thermally sprayed coatings by monitoring the temperature of the coating and varying the cooling intensity to match the heat generated in the spraying process. The temperature feedback system can use a variety of inputs, including single-point infrared sensors, 2-D thermo-imaging infrared cameras and contact thermocouples. The PLC-controlled cooling system maximizes cooling efficiency by automatically switching cooling modes — between room temperature, nitrogen gas, liquid/gaseous nitrogen mixed flow, and 100 percent liquid nitrogen — based on user-defined temperature ranges. Discharged from a spraying nozzle or multiple sprayers, the liquid nitrogen is atomized to form rapidly boiling, microscopic droplets that turn into cryogenic nitrogen vapor within a short distance from the discharge point. This prevents undesired wetting of the coated surface. In addition, the multi-zone cooling control algorithm used allows individual cooling nozzles to switch independently between the cooling modes based on instant average and time-averaged temperature feedback. The operator also can choose to manually control the cooling process by setting the system at the desired cooling mode.

Digitalization of Process Control and Optimization

In the modern factory environment, the use of various sensors in the production equipment and the products being made enables a real-time flow of information regarding the operational status and condition of the equipment or product. Just as it is transforming the operations and processes, the Industrial Internet of Things (IIoT) is changing how products are designed, fabricated, used, operated and serviced post-sale.

With a cryogenic nitrogen cooling system, such smart controls manage the cooling process via inputs from various temperature sensors. After collecting enough historical data, the system can be trained to design the cooling process parameters and predict any product defects should it see an abnormal change of process conditions (i.e., part surface temperature). By detecting and analyzing the changes in key process parameters, the condition of the production equipment also can be predicted and reported to the operator. Part-temperature history is always recorded and can be archived locally or remotely. This capability is helpful for audits and provides necessary information for quality control.

In addition to the process data, information about utility and feedstock also can be collected after installing additional sensors. By analyzing information from the sensors, the system can provide operators with insights that allow them to better schedule thermal-spray jobs. For example, measuring the consumption rate of liquid nitrogen and monitoring the liquid nitrogen tank level can help the operator optimize production scheduling.

Rana Ghosh is director of application technology research and development at Air Products. The Allentown, Pa.-based company can be reached at 800-654-4567 or visit www.airproducts.com.

Liang He is a senior principal application engineer at Air Products. The Allentown, Pa.-based company can be reached at 800-654-4567 or visit www.airproducts.com.