Ozone can be used to treat cooling towers to reduce bacterial growth and the risk of Legionella.

Water provides the characteristics that make cooling towers an excellent means to transfer and dispose of heat. An unintended consequence of the open-loop water-cooling cycle, however, is that foreign debris, dust particles and chemical contamination are drawn in and, along with sunlight, contribute to bacterial growth. That growth — if not treated appropriately — leads to greater levels of bacterial growth and biofilm deposits within the cooling system. Ultimately, this untreated bacterial growth lead to reduced chiller effectiveness due to decreased thermal transfer. In addition, untreated biological growth can lead to the spread of Legionella pneumophilia, a potentially harmful bacteria once aerosolized.

According to the Centers for Disease Control and Prevention, in 2016, as many as 6,100 cases of Legionnaires’ disease were reported — of which, 10 percent were fatal. Moreover, because the true number of Legionnaires’ disease cases may be underdiagnosed, the 6,100 reported cases may represent an underestimate of the true number of incidences. In addition, studies show the occurrence of outbreaks are trending upward. As of yet, it is unclear if this is because of greater awareness and testing, or true growth.

Legionella is a common bacterium present in the environment of water systems, including soil and aquatic systems. At least 50 species and 70 serogroups have been identified, of which the Legionella pneumophilia serogroup 1 represents a serious concern related to Legionellosis. Fortunately, these bacteria are not transmittable from person to person, and most people exposed to such bacteria do not become ill.

Legionella acquired its name after an outbreak of a then-unknown “mystery disease” that sickened 221 persons and caused 34 deaths. The outbreak was noticed first among people attending a 1976 convention of the American Legion, an association of U.S. military veterans, in Philadelphia. This epidemic among war veterans was widely publicized and caused great concern among residents in the United States. 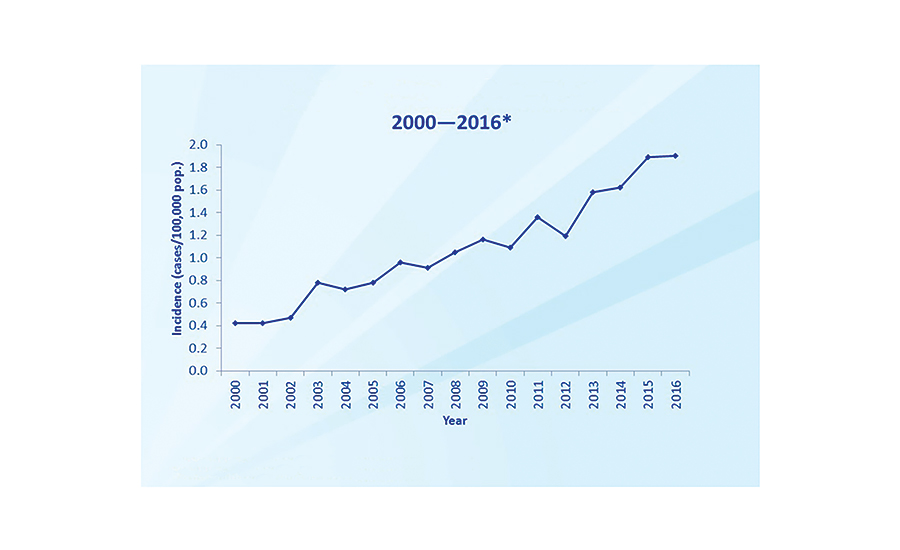 Studies show the occurrences of Legionnaires’ disease outbreaks are on the rise.

Symptom of Legionellosis infection or Legionnaires’ disease are similar to pneumonia. Legionella is transmitted to humans through inhalation of contaminated aerosols. Common environmental sources of these aerosols include drinking water, whirlpool spas, cooling towers and decorative fountains. Other reported sources include humidifiers and produce misters.

In the intervening years since Legionnaires’ disease was first diagnosed, many government agencies, cooling tower manufacturers and industrial trade organizations have developed design and maintenance guidelines for controlling growth and proliferation of Legionella within cooling towers. Most recently, the American Society of Heating, Refrigerating and Air-Conditioning Engineers (ASHRAE) has released its 2018 version of ASHRAE standard, “188-2018 Legionellosis: Risk Management for Building Water Systems.” 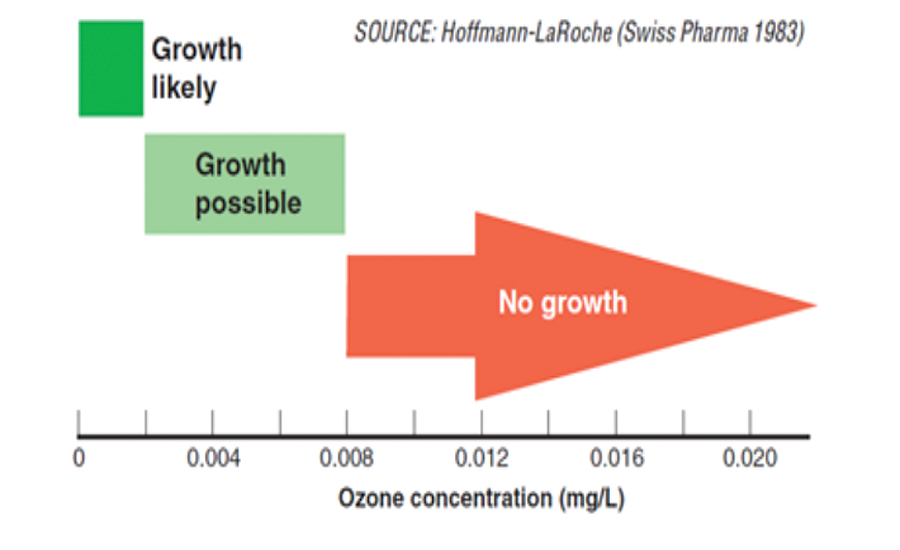 The oxidative effects of ozone have been shown to neutralize bacterial growth in water — and specifically to neutralize Legionella pneumophilia. A small dose of ozone can go a long way: A dissolved concentration as small as 0.008 mg/L of ozone serves to limit growth of bacteria in water.

Role of Biocides to Control and Prevent Legionella

Oxidizing biocides have proven successful in controlling and preventing Legionella development in water systems. With increased control regulation in halogen-based products, as well as ASHRAE’s standard 188-2018, however, there is a strong tendency toward reducing the chemical footprint in cooling towers — and reducing water consumption. Cooling tower operators are seeking a more sustainable — yet effective — approach to controlling Legionella. One method is use of ozone to disinfect water.

Ozone, known for its oxidative characteristics, has been used extensively in potable water systems, wastewater effluent treatment and in applications related to food processing, aquaculture and odor control. Ozone is a tri-atomic oxygen molecule with a density of 2.14 kg/m3; thus, it is heavier than ambient air. 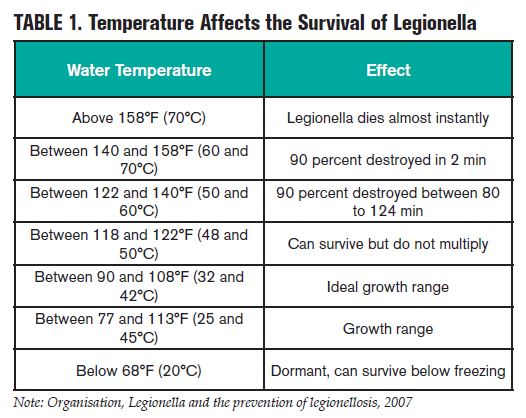 Ozone is an unstable gas that cannot be compressed or stored in a vessel. Instead, ozone is produced onsite using either oxygen from ambient air or compressed oxygen. As such, ozone possesses one the highest available redox — reduction-oxidation reaction — potential of 2.07 V.

The oxidative power of ozone has been shown to neutralize bacterial growth in water. More specifically, it has been shown to neutralize Legionella pneumophilia. A little dose of ozone can go a long way. As such, a dissolved concentration as small as 0.008 mg/L of ozone serves to limit growth of bacteria in water. A dissolved concentration of 0.3 mg/L (ppm) for a contact time of 5 minutes will provide a 5 log (99.9 percent) neutralization of Legionella. 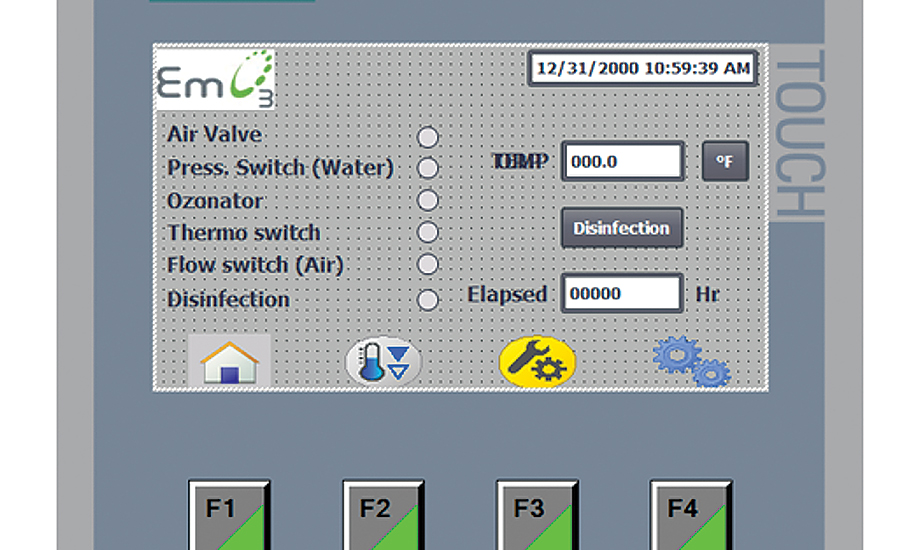 This HMI screen displays a view of ozone control for autonomous operation.

The most frequent question from operators is: “How much ozone do I need?” The quick answer is: “It depends.” As a rule-of-thumb, 5 grams per hour per 100 tons of cooling load serves as a fair guideline. Because there are several variables to consider — water temperature, volume of water, quality of makeup water, and cycles of concentration — this guideline sometimes needs to be adjusted. 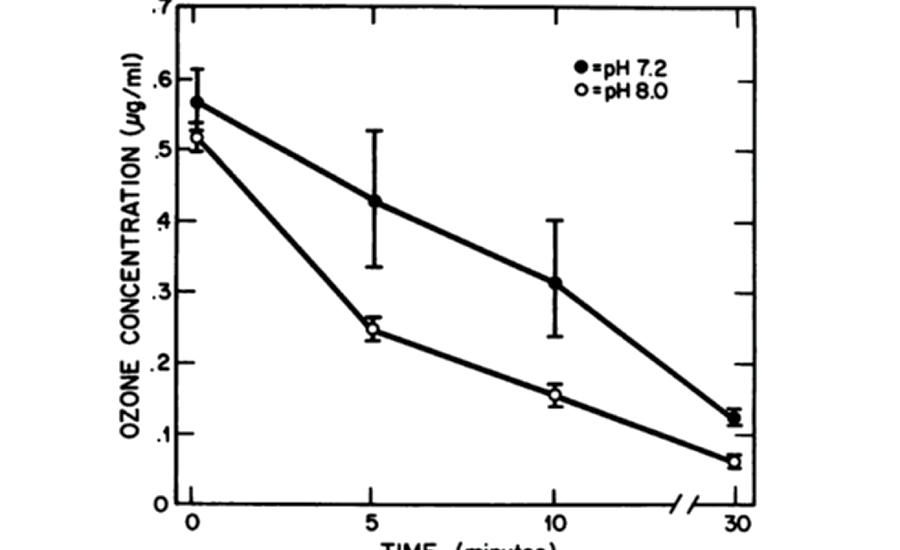 The concentration of ozone for neutralization of Legionelle pneumopiia is shown.[1]

What Is Required to Produce Ozone?

Because ozone always is produced on-site using air, there are several key components that are required:

Ozone-Injection Mechanism. As a gas, ozone needs to be dissolved in water. Two methods exist:

Typically, venturi eductors are preferred because the mass transfer is better. If the basin provides sufficient height, bubble diffusion may be a less expensive alternative if there is sufficient hydrostatic pressure. With either mechanism, there are packaged solutions that incorporate these components to facilitate the installation on a cooling tower. Figure 1 shows a typical skid-mounted unit comprising an oxygen concentrator, ozone generator, PLC and venturi eductor with a water-recirculating pump. 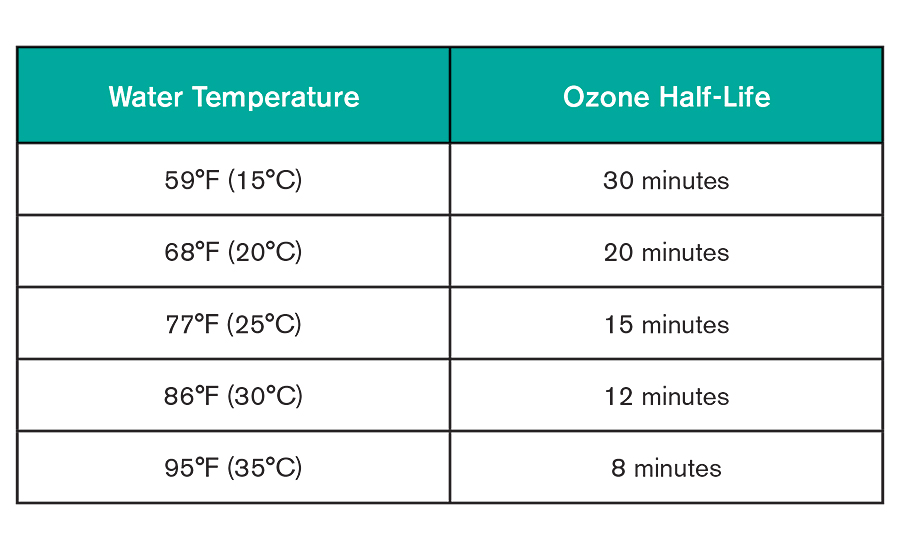 In conclusion, as the necessity for reducing water consumption and limiting recurring chemical cost continues, alternative and sustainable water treatment solutions become more attractive. Furthermore, more consistent reporting of Legionnaires’ disease outbreaks has led to a heightened awareness. That, coupled with new cooling tower regulations, have influenced cooling towers operators to see effective measures to mitigate the risk. As a non-chemical solution, ozone provides an alternative to traditional chemicals. Properly deployed, ozone is safe to use and reduces the risk of handling hazardous chemicals. PC