Based on the north shore of Massachusetts, New England Biolabs (NEB) — a company “created by scientists for scientists” — produces recombinant and native enzymes for genomic research.

Biotechnology is a growing industry, and the 50-year-old company has experienced steady growth. NEB outgrew its first facility, in Beverly, Mass., in 2003. After a move to Ipswich, Mass., demand continued to grow — and so did the facility, which was expanded in 2005. Yet company growth drove demand for even more space, so in 2017, NEB built a new facility in Rowley, Mass. The new plant is designed to comply with Good Manufacturing Practice (GMP) Standards for the manufacture of enzymes and other reagents.

While designing the production processes for the new facility, NEB engineers sought to incorporate equipment redundancy for some of the critical functions. Key to this was adding a number of chillers. As a result, NEB has 11 chillers performing different functions in the research and production processes.

In the laboratory fermentation area, the chillers are custom designed for NEB’s 36°F (2°C) supply water without glycol. Cooling without glycol was to chosen to help eliminate the chance of product contamination if a leak occurred in the process. The chillers are used for cooling both the heat exchanger in the cold rooms, which are used for product storage, as well as the jacketed laboratory fermentation vessels, which are used in cell growth. 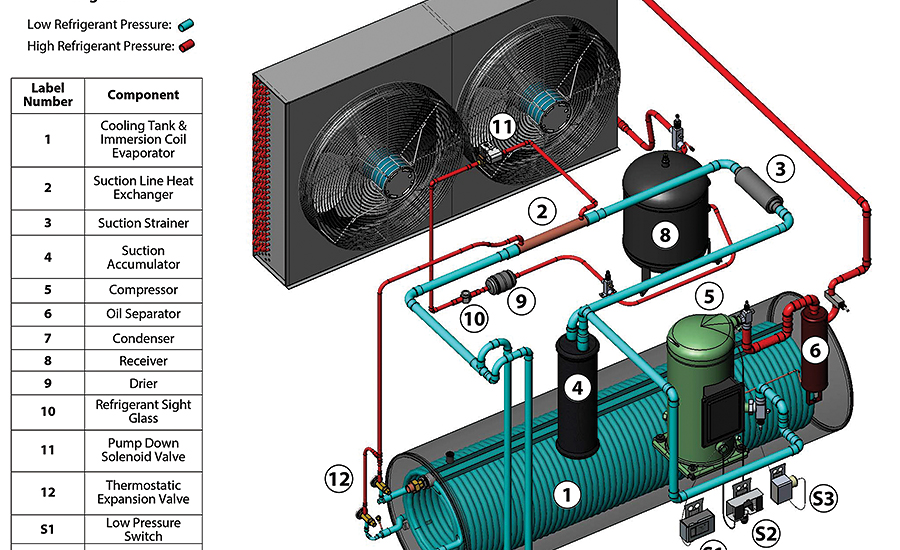 A typical chiller refrigeration circuit is shown in a schematic.

The cooling load for fermentation varies depending on two factors: the batch size and the organism grown in the laboratory fermentation tanks. The supplied chillers have a large, stainless steel storage tank with an immersed, stainless steel evaporator coil. This design creates a thermal flywheel. Such a design allows the chiller to handle wide variations in the heat load without affecting the coolant outlet temperature. This avoids short cycling during low load conditions.

The cold room heat exchanger application required the design of two chillers: a closed-loop chiller and a single-pass chiller. They operate in series and deliver 36°F (2°C) reverse osmosis water to the cold room heat exchanger. The closed-loop chiller includes the circulation pumps, and the single-pass chiller is a pass-through design.

This configuration met NEB’s desire for redundancy. The chiller was built in two space-saving sections, so they could be brought up a set of stairs to the mechanical area, where it was reassembled. 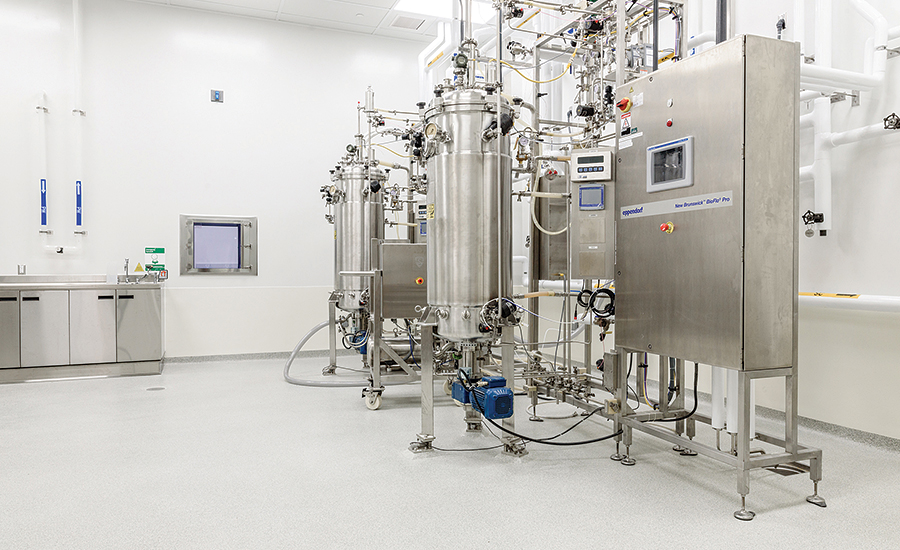 Chillers were custom designed for NEB’s 36°F (2°C) supply water without glycol to help eliminate the risk of product contamination if a leak occurred in the process. This design was employed for the heat exchangers in the cold rooms, which are used for product storage, as well as in jacketed laboratory fermentation vessels (shown), which are used in cell growth.

When the cooling system was designed, it was determined that a closed-loop, water-cooled chiller would be the most-effective solution for centrifuge cooling. The chiller was built to the same specifications as the laboratory fermentation process; however, the compressor is smaller, and the pump meets different flow and pressure requirements. Also, because the 10°F (-12°C) coolant temperature requires propylene glycol for freeze protection, the tank/evaporator was sized to account for the de-rating of the heat transfer from the glycol. 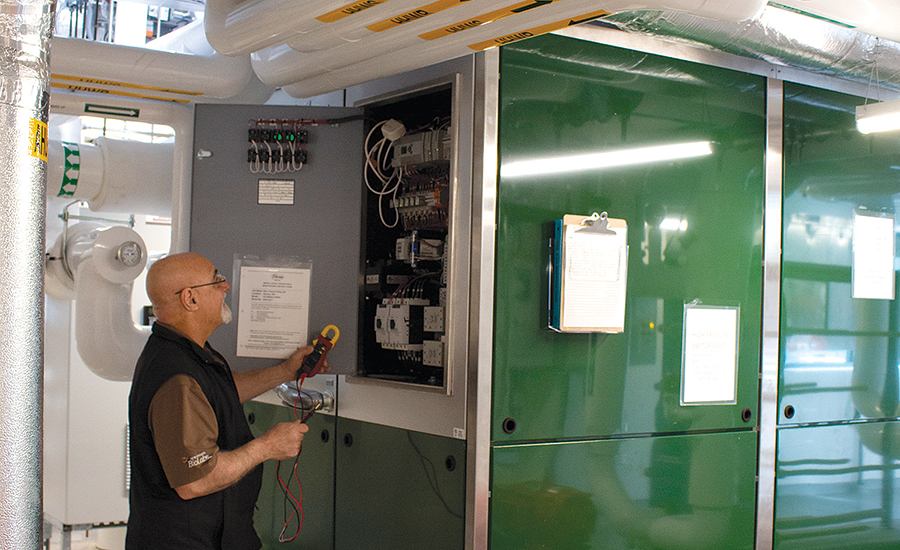 In addition to its process cooling systems, NEB also reached out to its chiller supplier to provide cooling for a gatehouse project at the Ipswich facility. This project involved renovating an older residential building to house visiting scientists.

With experience in process and space cooling, the chiller manufacturer was equipped to handle the job. The company used a modified split system. It was built in sections so it would fit down a steep and narrow stairway into the basement, where it was reassembled. Because the house is located in a residential area, the remote air-cooled condenser was designed to meet stringent noise-level restrictions set by the engineer. The system has redundancy on the pumps and refrigerant circuits. 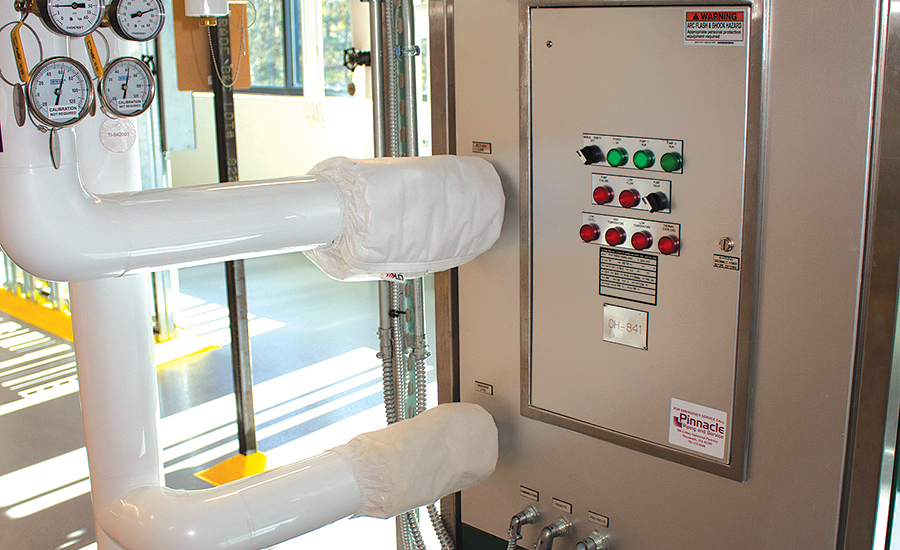 Shown here is the piping hooked up to the low temperature, 10°F (-12°C) chiller at biotechnology provider NEB.

Elsewhere, for its newest facility in Rowley, NEB asked the chiller maker to build two process chillers. They also wanted to connect the chillers to the building management system (BMS) to monitor the chillers’ status and temperature readings. A programmable logic controller (PLC) with ModBus communications via RS485 interface was added to both chillers. It controls operation of the refrigeration unit, circulation pumps and all accessories. 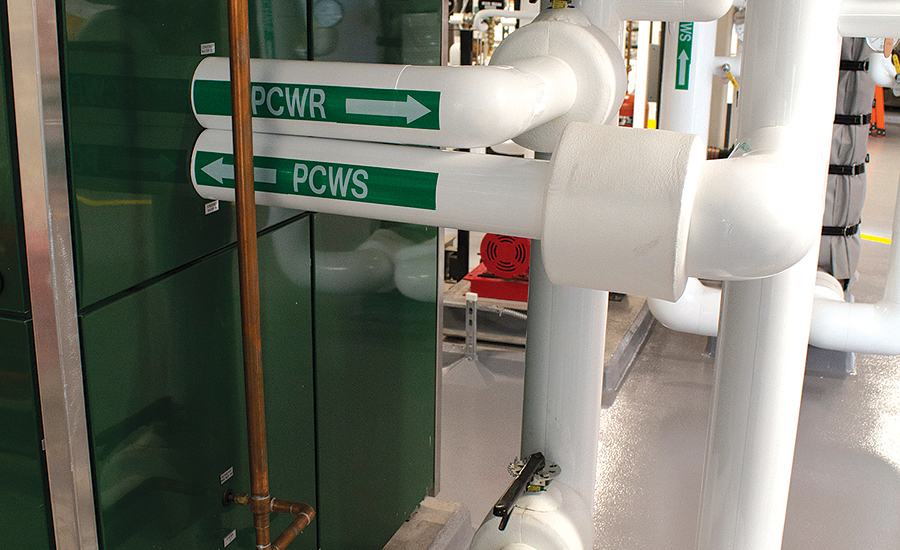 Dual-circuited condenser water piping and refrigerant vent connections can be found on the back of this NEB chiller.

The second water-cooled, single-pass chiller was installed for cooling fermentation and purification suites and some plate-and-frame heat exchangers. This chiller was designed to handle a much larger heat load and required a dual 30-hp refrigerant circuit. Because consistent temperature is critical for NEB’s process, an integral agitation pump was included to maintain an accurate, consistent coolant temperature from the chiller. The acoustic, insulated panels were specified for this chiller as well.

The chiller maker also included startup and service packages with each chiller. After each new chiller is installed, a local service agent commissions the chiller and makes sure the chiller is operating as specified and designed. The service package provides three preventive maintenance visits and covers repairs for the first year after commissioning.

A closeup of the chiller operations screen used for monitoring is shown. Controls manage the operation of the refrigeration unit, circulation pumps and all accessories.

Especially with mission-critical applications, the process chiller needs to be built to run reliably and with the maximum uptime. Having such a system allows the owner to concentrate on the production process rather than the chiller operation. PC

Turner Hansel is the president and process chiller division manager with Filtrine Manufacturing Co. The Keene, N.H.-based company can be reached at 603-352-5500 or visit www.filtrine.com.