Accurate temperature control during the mixing and pouring stages leads to a strong and durable product.

Though resulting in a sturdy final product, the process of creating concrete is actually quite delicate. The strength and durability of concrete’s ultimate state depends largely upon accurate temperature control during the mixing and pouring stages. From beginning to end, temperature control acts as a crucial structural element.

Concrete begins to form when water is added to a mixture of sand, gravel and cement (a powdery lime and clay binder substance). Heavily used in the construction industry, concrete is used to form the base of structures such as buildings, dams and bridges. It also can have stand-alone uses such as roads and drains. Concrete’s durability and strength make it a robust and widely used material.

Due to the nature of pouring concrete, around 70 percent of it is laid during the warmer months of May to October — prime construction season. The same warm weather that increases concrete demands, however, complicates the concrete-making process.

Concrete is susceptible to ambient temperatures. In order to produce the best final product, the process must be kept under close temperature control. Fortunately, for most concrete processes, a simple cooling circuit suffices for this purpose. By accurately controlling the material’s temperature, users ensure production of a high quality final material.

The first area of temperature control during the concrete creation process occurs during cement hydration. Water is added to the cement/aggregate blend and evenly mixed throughout. As water is added — a process typically referred to as hydrating the mixture — the major cement compounds break down and form chemical bonds with the water molecules. Cement has four main minerals, and each component reacts at a different rate.

Cement hydration is an exothermic process, meaning it releases heat as it occurs. If not properly dealt with, this heat can cause problems with the concrete in later stages. If the mixture becomes too hot too early, the hydration process could stop prematurely. Not accounting for the heat of hydration results in finished concrete that is weaker and more prone to cracking. 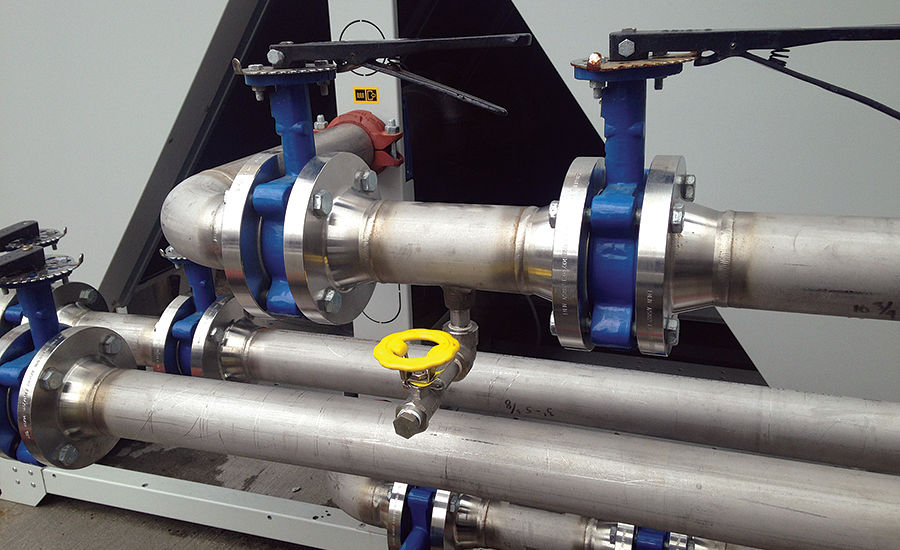 This process-water piping — for a dual-chiller installation — was insulated after chiller commissioning to prevent external frost and sweating. This step often is recommended for outdoor applications.

Cooler temperatures allow for more process heat to be absorbed during hydration. This state lengthens the time the process can continue without overheating and ceasing. Cooler temperatures also allow for the cement minerals to become more unstable and better able to mix. Thus, the hydration process can occur more smoothly. In effect, controlling the temperature during hydration helps create the best-possible finished product.

The most common method of controlling the temperature of the cement hydration is by using cooled hydration water. By incorporating cool water from the start, the process has a greater ability to absorb heat. The lower starting point helps to reduce dehydration and increase cohesion of the final product.

A chiller can reduce the temperature of the hydration water. In the chiller’s evaporator, the hydration water is cooled by mechanical refrigeration. Liquid refrigerant enters one side of the heat exchanger and absorbs heat from the batch water flowing on the other side. The refrigeration process runs continuously, with the water exiting the chiller at the desired process temperature, usually around 50°F (10°C). In some applications, city water flows continuously into the chiller. Once cooled, the water immediately blends with the mixture of cement and aggregate.

For other applications, the chilled water may be stored in large insulated tanks for later use. Sizing of the chiller will depend on whether the concrete-making process is continuous or batch.

The most common process chillers for the concrete-making process are air-cooled, self-contained units. Because there are many sizes and designs available, working with a trained cooling professional can help to find a unit for a system. Design and demand balance are important in order to meet system requirements.

Transporting the Material. Due to the demands of creating concrete, most of the time, it is not made on site. Instead, after being hydrated, the concrete mixture is transported to the final location.

This transportation phase is a critical part of the overall process. The concrete must still be workable when it arrives. Even with the use of special concrete trucks that mix and stir, only a limited time exists for the mixture to stay pliable. (Travel time is generally limited to 1 to 2 hours.) After that time, the mixture is considered unworkable and not able to be poured. Monitoring the internal temperature during this time helps to understand the usability of the concrete. 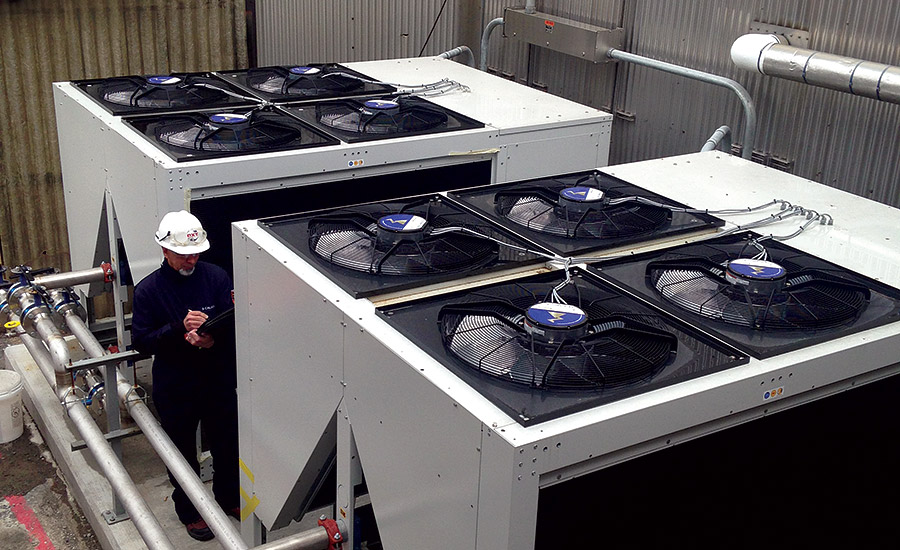 Only certified cooling personnel should install and perform maintenance on process chillers. Their knowledge and expertise limits the chance for improper installation or setup.

Temperature remains important for the final stage of the concrete process as well. If the earlier steps were completed correctly, the concrete mixture should have a fairly consistent temperature throughout. However, the area of the pour site also should have an even temperature. The larger a pour site is, the more difficult obtaining this even-tempered surface may be.

Uneven temperature due to poor cooling during hydration or unequal air exposure leads to weaker concrete. Oftentimes in warm ambient temperatures, the top layer of concrete will dry before the bottom layers dry. Concrete shrinks as it dries. A shrinking top and a stationary bottom cause strength issues and can result in broken concrete.

In uneven curing scenarios, the concrete’s density also can be affected. Curing concrete at higher temperatures expands more than lower temperature concrete. Concrete density and its strength are proportional. However, concrete with the best strength has an even density across the entire site.

In order to prevent shrinkage and uneven curing in the concrete, an evaporative cooling method often is employed. The slab may be sprayed with cold water before pouring to create an even base temperature. Once the area reaches a relatively uniform temperature, the concrete can be poured. After pouring, the concrete surface must be kept moist. Regularly spraying cold water on the surface will lower the concrete’s temperature via evaporative cooling and allow for even setting of the material. Adding water, however, must be done in a controlled way. If too much is added, it can begin to weaken the material. It is important to know the effects of the surrounding conditions and the ultimate use of the concrete to decide on the appropriate setting speed. 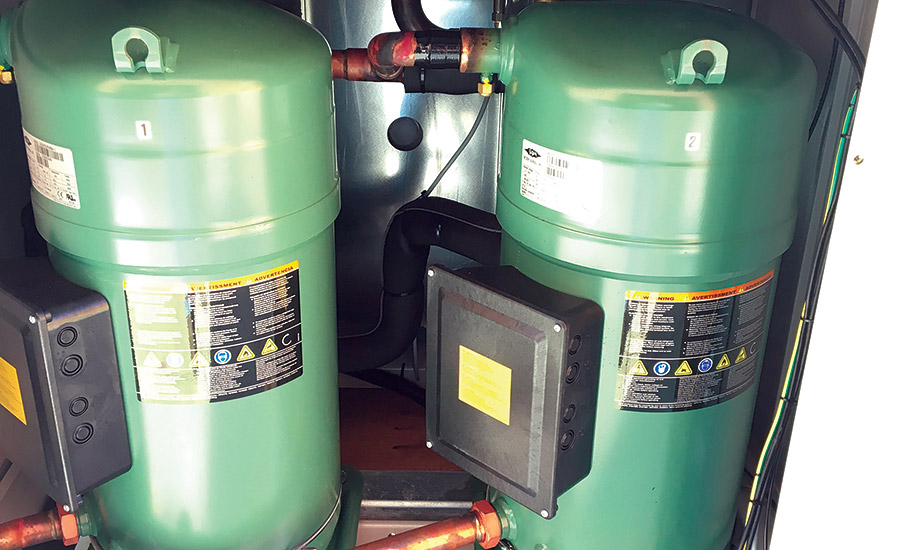 A tandem compressor setup is commonly employed on large chillers. This setup can provide energy savings at partial-load conditions.

In Conclusion, every system is unique. In order to build the best cooling system, the needs specific to that setup must be considered. The most important factor determining chiller size and purchase is the thermal-load capacity. Other factors such as incoming/outgoing water temperature, ambient temperature and batch water volume all affect the heat load needs of a concrete cooling system.

Strong, long-lasting concrete comprises many everyday structures. From roads to buildings to bridges, the strength of concrete matters. Fortunately, with careful calculations and a thorough understanding of the role of temperature control, quality concrete can be produced. PC

Chase Cooling Systems is based in Washington, Pa. The company can be reached at 724-746-7066 or visit www.chasechillers.com.

Using a Multi-Method Approach to Temperature Control in Food Processing