A processor realizes energy and water savings after installing an adiabatic cooling system.

Globally, regardless of the industry, water and energy savings are becoming more important. This article explores the benefits of adiabatic cooling by looking at a new installation at a metal processing company that was scheduled to go online in late 2019. A case history helps illustrate how other industrial processors might take advantage of this technology.

The adiabatic dry coolers reject heat from the water-cooled chillers used in Hitchiner’s process. A total of seven adiabatic dry coolers will be used to provide 22,092.0 MBH of cooling to the processes and are expected to cut operating costs by $128,660 per year. Each adiabatic dry cooler includes 16 electronically commutated (EC) fans. The coolers have the ability to maintain 85°F (29°C) fluid temperature to the processes for cooling on a design cooling day in Milford. (A design day is where the ambient temperature is technically near its warmest condition. This is to ensure that the system design can reject heat outdoors even on the warmest ambient days.)

The adiabatic process reduces temperature without heat exchange. In an adiabatic cooling system, water saturates a pad installed on the outside of the coil surface, thereby protecting the coil. Air drawn over the wetted pad is precooled before gaining heat from the dry fincoil. The adiabatic system modulates the water released to the pad, thereby reducing the amount of water used compared to on/off-type controls. The adiabatic process provides more efficiency than a standard dry cooler; however, it is not as effective as an evaporative cooling tower. Figure 1 illustrates the process. 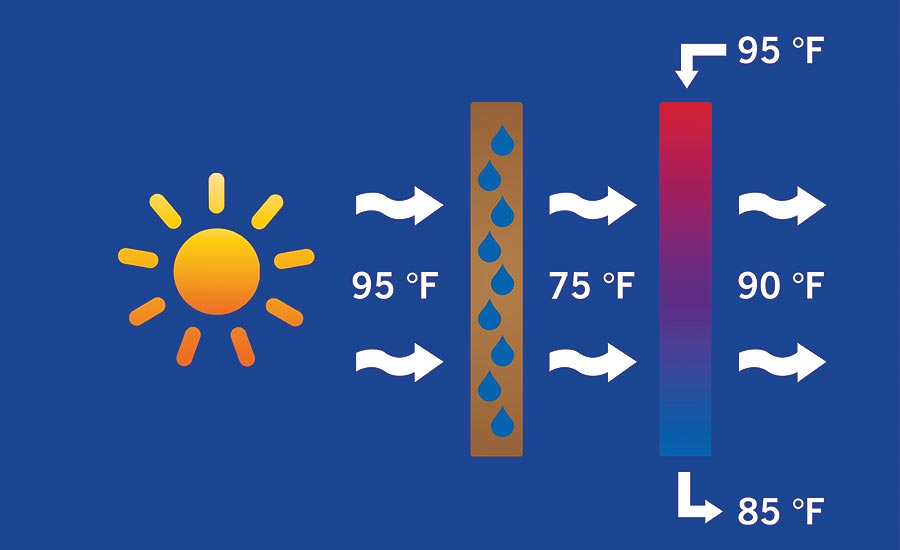 FIGURE 1. The adiabatic process reduces temperature without heat exchange. In the installed system, water saturates a pad installed on the outside of the coil surface. Air is drawn over the wetted pad and precooled before gaining heat from the dry fincoil. The adiabatic system modulates the water released to the pad, thereby reducing the amount of water used.

Once the ambient temperature reaches the designed switchpoint, the water will engage and saturate the pad. The higher the switchpoint, the longer the cooler will run in dry mode without precooling from the water. More importantly, the adiabatic cooler is able to engage the water at different fan speeds in order to save either energy or water.

For instance, the water would engage at 100 percent fan speed and then begin saturation and metering in order to save the greatest amount of water. By contrast, in the energy-saving mode, the adiabatic cooler would bring saturation and metering at approximately 40 percent of fan speed. Bringing saturation at 40 percent of fan speed has an advantage in that the air is precooling sooner (at 40 percent of the fan speed). Due to fan laws, this reduced speed while maintaining the capacity saves a lot of fan energy but sacrifices slightly more water. If saturation starts at 100 percent fan speed, then water can be saved, but using the fans more sacrifices fan energy. A smart controller has the ability to accept inputs for the costs of water and energy to optimize the proper fan speed and amount of water to provide overall savings. 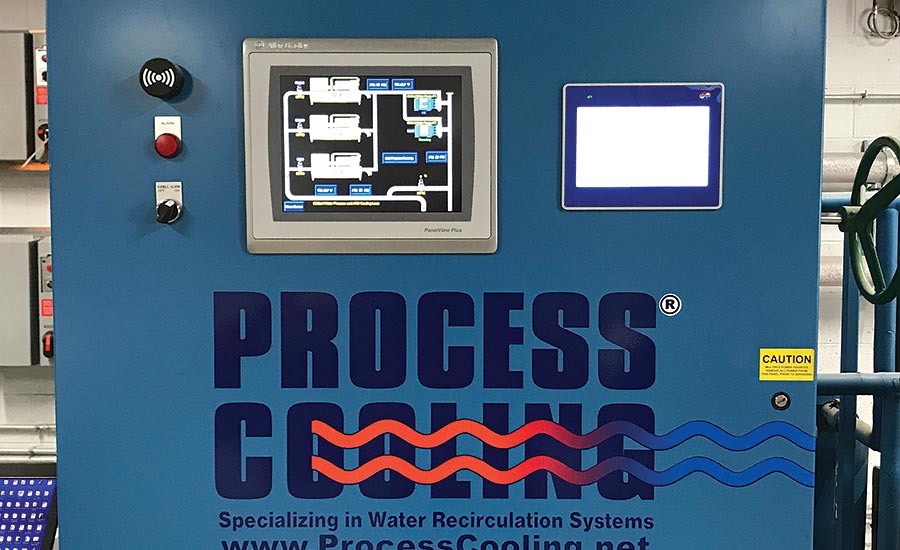 The systems have smart controls that help further reduce the energy and water usage.

How Does It Meter the Water?

The water and motor controllers will work together to achieve process control, metering the water evaporated off the pads to reduce overall water consumption. The water-managing controller has humidity and temperature sensors along with a modulating valve, drain valve and metering device. It reads the fan speed along with the humidity and temperature to determine how much water to distribute to the pad, thereby only using what the ambient air will absorb.

At the Hitchiner plant, the precooled air temperature at design conditions is 76.9°F (24.9°C). Electronically commutated fan motors were used, negating the need for a variable-frequency drive. The EC fans utilize a brushless DC motor with a permanent magnet along with integrated electronics. The electronics include built-in current limitation, temperature monitoring, alarm information, soft start and integral speed control. EC fan motors offer greater efficiency relative to AC motors due to a permanent magnet in lieu of windings (resulting in no slip losses). The EC fan motors are able to modulate up and down depending on the process requirements. When compared to a step-control methodology (or similar), having the exact amount of fan speed required to meet demand is more efficient than that of conventional fan types.

Because Hitchiner will operate in a colder climate at times, standard fan features include a cleaning mode so the fans will turn in reverse to push out any larger debris from the pads. A low capacity motor management feature performs under low load conditions. In this situation, the fans turn down to approximately 5 percent of the load to remain under low ambient, low load conditions. The fans also alternate in order to maintain the same number of running hours per fan during low capacity operation.

A break-free function allows the fans to oscillate in case of ice buildup. A bypass function is built in as well. If errors from the controller are detected, the fans turn on at 100 percent so as to not lose any heat rejection.

The water and energy usage data is stored on the standard adiabatic controller and the fan controller. The usage data is accessible from the controllers as well as the system fieldbus. For this installation, Hitchiner opted for an integrated PLC and panel setup for process control and the building BMS monitoring. The panel includes the capability for isolated system control with a separate touchscreen, on which the customer also can monitor and control all the heat exchangers. 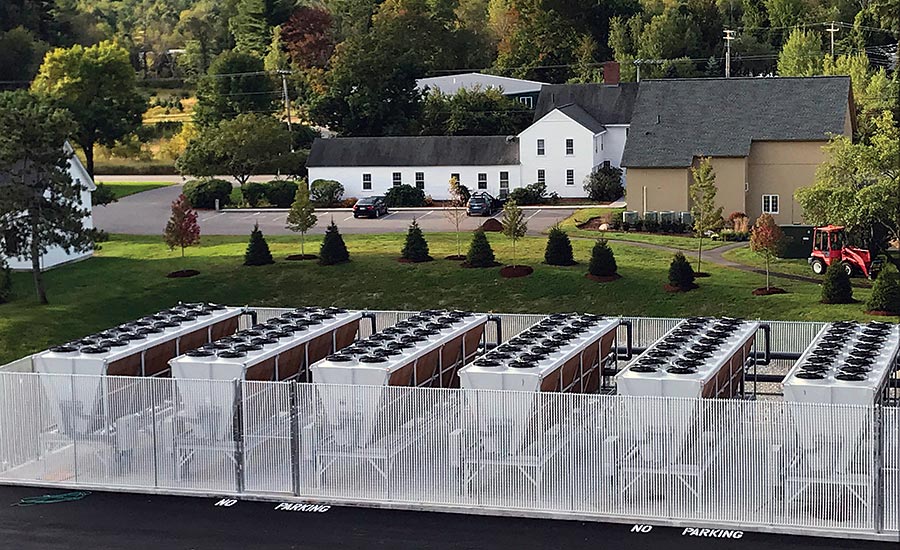 At Hitchiner Manufacturing, the adiabatic coolers are designed to reduce city water consumption. This image shows the size and scope of the installation.

Aside from other benefits, Hitchiner reduced its filtration requirements because the city water that is consumed in the adiabatic process is not circulated back through the system. The reduced filtration eliminates the need for water treatment systems and filtered circulation pumps.

Also, using adiabatic cooling allows Hitchiner to avoid a visible plume as might occur from cooling towers. There is no standing water and city water is colder, which will deter any bacteria growth.

In conclusion, in this installation and others like it, using adiabatic coolers will allow plants to reduce city water consumption. Cost savings are possible via reduced city water demands, eliminated electricity costs for filtration pumps and reduced maintenance due to fewer systems for cooling. Construction of the building and infrastructure are still in progress with the design expected to be in full process operation by late 2019. PC