Choosing a Chiller for Laser Cooling

For laser cooling applications, consider the process chiller features that will best be able to meet your system needs.

Lasers have become ubiquitous tools in the industrial space. Since being invented in the 1960s, the laser’s ability to cut, mark and bind tough materials has only strengthened. With these improvements, lasers have become a crucial component when making many everyday products.

The downside of working with a laser system, however, is the inevitable byproduct: excess thermal energy. This heat must be removed effectively from the process. If not treated appropriately, excess heat can bog down the laser, decrease efficiency, prevent proper functionality and shorten equipment lifespan — none of which are especially desirable outcomes.

For most industrial lasers, adding a process chiller to the layout will help to mitigate these issues. The type of chiller chosen influences the integration process and the heat-removal method. Right away, users must decide whether an air-cooled or a water-cooled chiller is best. For most laser applications, I recommend an air-cooled unit.

Each laser application varies from those around it. Differences can exist even within the same facility. In order to effectively build a durable, long-term solution for the particular application, the cooling solution must be crafted from a thorough understanding of the system itself. Even the smallest details of the system could play a much larger role in executing how the cooling system operates.

Examining some of the most common chiller features through the lens of how they may be used in laser cooling can help to develop a more thorough understanding of what a system may need. This article will look at some of the most useful features and reoccurring conditions in industrial laser applications. 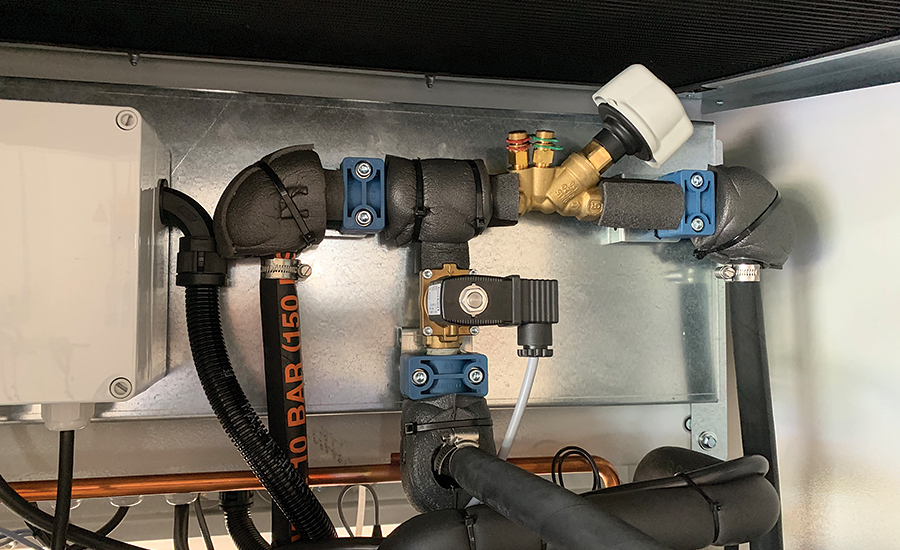 Two valves are used to regulate the temperature of the laser source cooling circuit. The precision provided by these valves helps a chiller meet exact cooling demand.

The precise nature of lasers makes them extremely reactive to changes in their environment. If temperature does not remain within a particular range, detrimental situations can develop.

Allowing a system to become too cold can result in condensation within the laser machine. This is a condition that must be avoided to prevent damage to sensitive components. Some chiller models include electric heaters that activate when the system temperature falls below a customized set temperature. This feature eliminates the detriment of cold startup.

Certain arrangements are particularly sensitive to circuits containing ferrous, or iron-based, materials. These systems often have a lower ability to tolerate corrosion.

Systems containing iron are more prone to corrosion. Corrosion particles can contaminate the system’s water and potentially clog narrow passageways in the cooling circuit. Also, certain laser diodes may be damaged should they come in contact with contaminated fluid. In order to protect system integrity, choosing a chiller with a nonferrous circuit may be the best option. 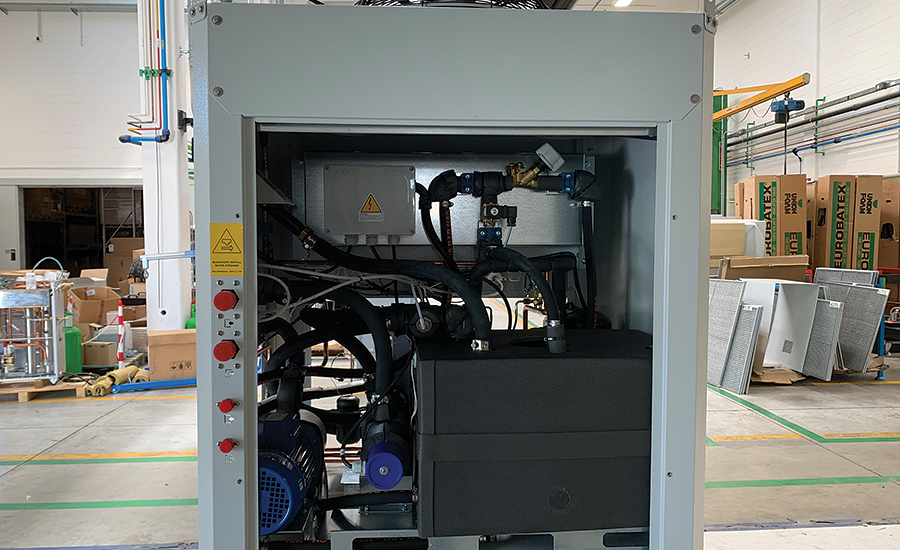 A chiller with dual-cooling circuits may be better able to meet a demanding laser application. Though the cooling circuits are located in the same housing, they operate autonomously.

Sensitive applications such as those where coolants run over electrical components require the use of deionized (DI) water in order to run appropriately. Deionized water is water that has passed through a reverse-osmosis filter to remove ions suspended in the liquid. This process virtually removes the fluid’s ability to conduct electricity. To cool the optics of a laser, deionized water often is preferred.

Several common materials such as copper are antithetical to deionized water. Running deionized water over such metals can actually re-charge the water — and could lead to system degradation. An improper arrangement could quickly ruin the protection built in by the use of deionized water. Instead of a clean, smooth-running system, there may be dissolved salts and mineral deposits.

Never use deionized water unless a system has been properly prepared for it. Pay close attention to the plate heat exchangers. Typical units are copper brazed, which are not generally suitable for use with deionized water. An exception exists if the copper is alloyed with a sufficient amount of silver. 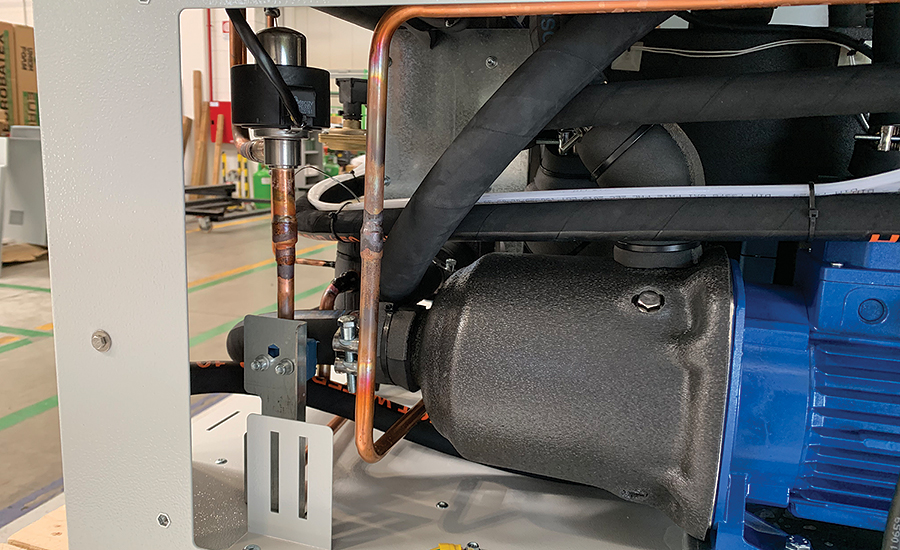 The hot-gas bypass valve (shown on the left) allows for minute temperature adjustments by regulating the system pressure.

A recent development for some laser cooling applications is the use of dual-cooling machine. Laser operations have two main sources of heat: the laser source and the optics. Both produce heat in different ways, and they need to be kept at different operating temperatures in order to run properly.

Chillers with two separate cooling circuits offer a unique way to address this dual need. The circuits’ temperatures can be adjusted independently and controlled separately. Though the circuits come from one machine, they operate autonomously.

The benefit of this setup is twofold. First, there is only one physical machine to fit into a system. Second, the temperature of the two separate circuits can be controlled from a single point. In applications that use two chillers instead of a dual-cooling machine, the cooling process could be complicated by using two circuits. Using a chiller with dual cooling circuits can simplify operation through the use of one central unit. 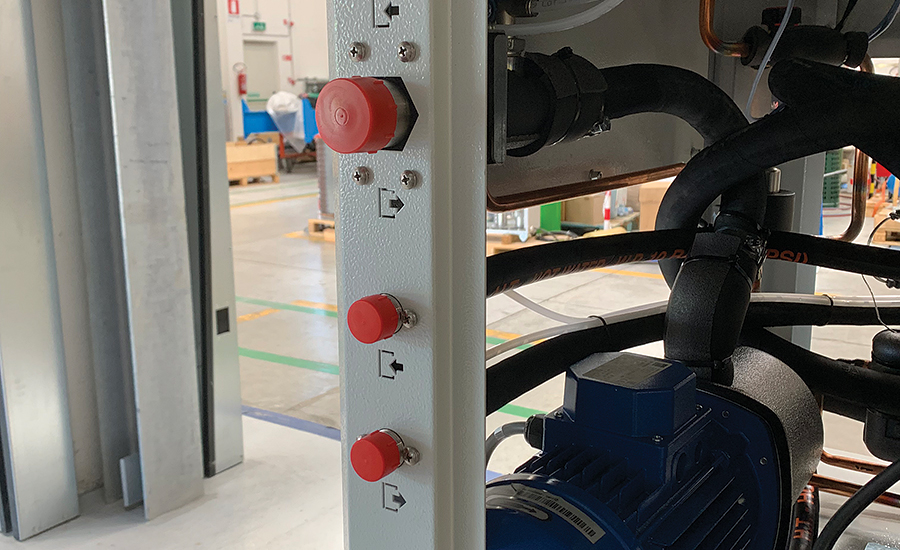 In this closeup of the dual-cooling line setup, the two red knobs at the top are the inlet and outlet for the circuit cooling the laser source. The bottom two knobs are designed to cool the laser optics.

Ultimately, the most important feature when deciding on a chiller is determining whether it will fit within its final installation location. Often, processors have a particular area in mind for the final chiller destination. Knowing information such as the physical measurements, noise restrictions and general conditions of the installation area is vital to determining whether or not a particular unit is feasible for a given application.

The most basic component to know is the size of the unit itself. Be sure to incorporate anything that could affect size needs (wheel kits, for instance) when measuring for fit. Also, processors should keep in mind required perimeter space. Whether for maintenance, legal or logistically reasons, always ensure that a space can properly accommodate the chiller unit prior to purchasing. State or local regulations may specify the required boundary space for equipment in certain locales. Some chiller manufacturers also may have suggested or required clearances. The processor should be sure the machine is in legal compliance and has the appropriate amount of room for optimal performance.

Another factor to consider when matching the space available and the chiller unit to be used is the chiller cabinet design. Perhaps the installation requires the chiller to be placed outdoors. Is the chiller being considered one that can be placed outdoors? Or perhaps the standard cabinet only makes it safe for indoor installation. Such factors should be discussed before final selection and installation. Many chiller manufacturers make units that are suitable for both outdoor and indoor use. The unit may be delivered in indoor mode unless explicitly modified, however. Unless a clear discussion has been had about the unit being operable outdoors, one should never assume a unit is safe for outside operation. 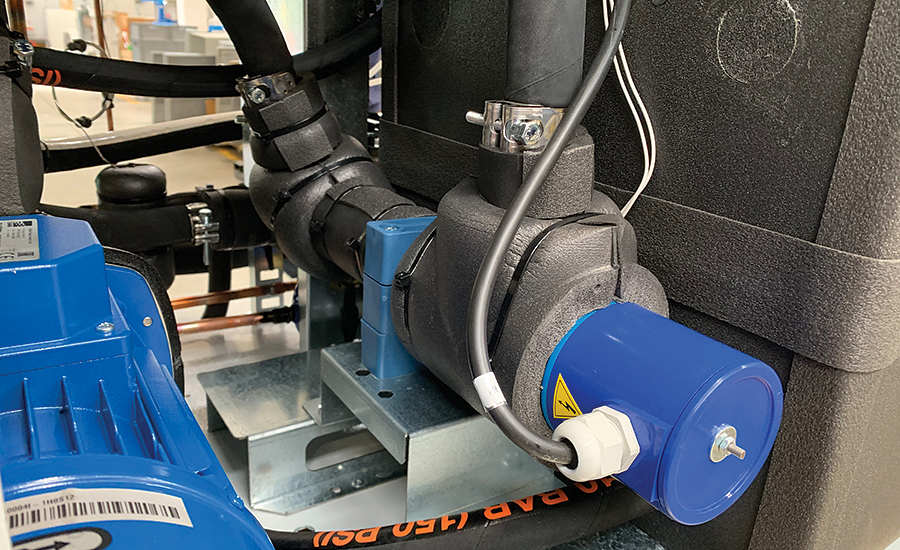 A final — and important — consideration regarding the installation space is the general ambient conditions surrounding the machine. If the ambient temperatures are routinely hot, the machine will have to work harder to meet the cooling requirements of the laser. In extreme conditions, the chiller may not be able to reach the desired operating temperatures. Conversely, some chillers require a minimum ambient temperature for proper startup and correct operation. Too low of ambient conditions could affect the chiller’s ability to operate smoothly. Be sure to know the operational conditions of the specific space in which the chiller is being placed. Incorporate these discussions early in the chiller selection process.

In conclusion, no matter the specifics of the industrial laser application, choosing a well-matched chiller is crucial to overall system success. Whatever the next project may be, thoroughly investigating the process and installation location will help define the mandatory chiller requirements. Take that knowledge and apply it to choosing a chiller with all the appropriate features so that it will be designed for application success. An industrial laser system has many pieces. Do not let a mismatched cooling system be the broken one. PC Sydney Turnwald is the communications coordinator with Chase Cooling Systems. The Washington, Pa.-based company can be reached at 724-746-7066 or visit www.chasechillers.com.

5 Considerations When Choosing a Chiller for 3D Printing

Tips for Choosing a Filtration Solution for Process Cooling

Choosing a Water Screen for Your Cooling Tower System