The materials of construction, temperature range, accuracy and control requirements for each type of temperature-measuring device varies, but the key function remains the same.

Temperature is a critical — and constantly measured — controllable process variable for engineers with applications ranging from water feed to a boiler to the temperature inside an induction furnace. In fact, temperature measurement in industrial processes covers a diverse universe of needs.

To meet these needs, manufacturers of process controllers have developed many sensor types and devices. The choice of temperature-measurement device depends — most importantly — on the characteristics desired in the sensors:

In general, however, temperature measurement can be classified into a few categories:

Thermometers are the oldest type of temperature-measurement device. They appeared in the 1500s in the form of an air-thermoscope, the forerunner of the glass thermometer. Today’s thermometers are capable of highly precise measurements. The accuracy and uniformity of the bore made in the glass tube is their only limitation in terms of precision. They originally used mercury as the temperature-sensing medium.

Many modern thermometers use fluids other than mercury due to the hazards of spilled mercury. These fluids typically do not have the high temperature capabilities that mercury does; however, the newer mediums have been engineered to have specific rates of expansion.

One major drawback of the glass thermometer is the limited pressure capacity and fragile nature of the glass. These factors led to the use of thermowells. A thermowell is a closed-end metal tube that is inserted into the chamber or fluid. The thermometer sits in this thermowell, making contact with its sides. 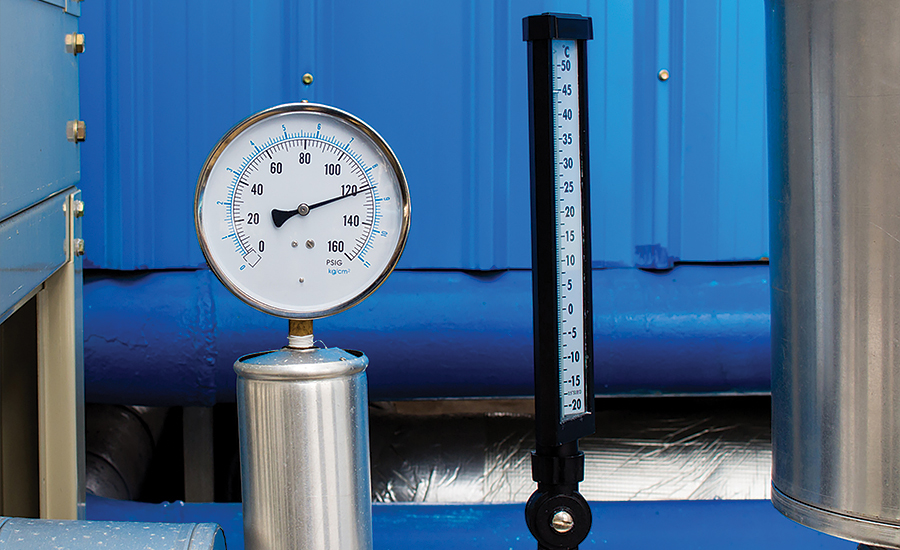 Many modern thermometers use fluids other than mercury due to the hazards of spilled mercury. These mediums have been engineered to have specific rates of expansion. These fluids typically do not have the high temperature capabilities that mercury does, however.

The accuracy of a thermometer is dependent on both the manufacturing process and its usage. Pressure exerted on the bulb can affect the reading, and the amount of immersion in the fluid to be measured also can have a dramatic effect on accuracy. Because they are not designed to be totally immersed, most commercial thermometers have lines etched into them to show the calibrated depth of immersion.

“Options for Industrial Temperature Measurement During Process Cooling,” the second part of this two-part article series, looks at thermocouples — the most widely used temperature-measurement devices — and also explores instruments to control temperature in industrial processes.

It is possible to use a glass-tube thermometer as a control-loop measure by placing a conductive element inside the glass tube. When the mercury makes contact at the desired operating point (and with a second contact at the bottom), you can create an electrical switch. There was a time when these were the predominant control device, but now they are considered antiques.

Originally, the bimetal thermometer was designed to be less accurate but more rugged and robust than the glass thermometer. It is constructed of a metal-sensing rod (which conducts the temperature), the thermal element and a scale. The bimetal sensing element consists of two different metallic materials sandwiched together. As the temperature rises, the metallic components of this element expand — but at different rates. This difference in expansion rates creates a stress and motion. If an indicator is connected to the element, this motion can be displayed and measured. A good example of these type of sensors can be seen in the analog thermostat in many homes. In those devices, a bimetallic spring is connected to an indicator and a mercury level switch. The winding and unwinding action of the bimetallic spring moves the indicator, activating the switch.

Generally speaking, the bimetallic thermometer is accurate and inexpensive, which is why they are still prevalent in industrial, commercial and residential environments.

The principles and theory associated with thermoelectric effects were not established by any one person, but the discovery of thermoelectric behavior generally is attributed to Thomas Johann Seebeck. In 1821, Seebeck discovered that, in a closed circuit made up of wire of two dissimilar metals, electric current will flow if the temperature of one junction is elevated above that of the other. (Seebeck’s original discovery used a thermocouple circuit made up of antimony and copper.) 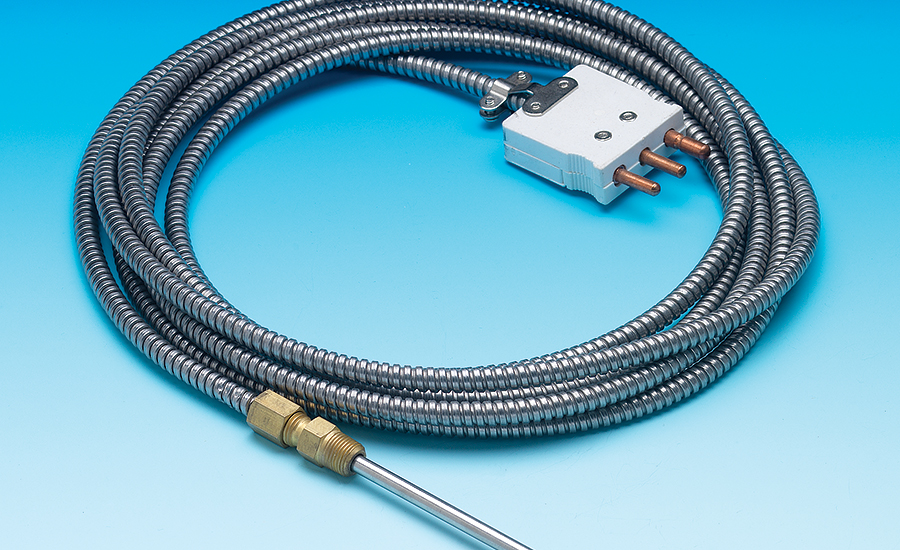 Probes are capable of measuring temperature, but they need additional instrumentation or circuitry to make and display any measurement. In general, modern devices are electronic, and the display is in the form of a resistance, voltage or current, which is scaled and displayed.

In 1826, an inventor named Becquerel used the first platinum-vs-palladium thermocouple. This led to today’s common industrial temperature-measurement devices. This resistance element was the first in a series of devices that are not classified as probes or transducers. Instead, they fall into three general categories:

While the device Becquerel used was actually a resistance element, the term “thermocouple” is used to describe the voltage-creating devices in the thermopile classification. These types of probes are capable of measuring temperature, but they need additional instrumentation or circuitry to make and display any measurement. Most modern devices are electronic, and the display takes the form of a resistance, voltage or current, which is scaled and displayed.

Resistance elements were the first probes, and early inventors understood the relationship between temperature and the resistance of different elements. This gave rise to a series of elements called thermistors. The thermistor is a thermal-resistance element that changes resistance with temperature, where temperature is measured by passing a small DC current through the device and measuring the voltage drop produced. 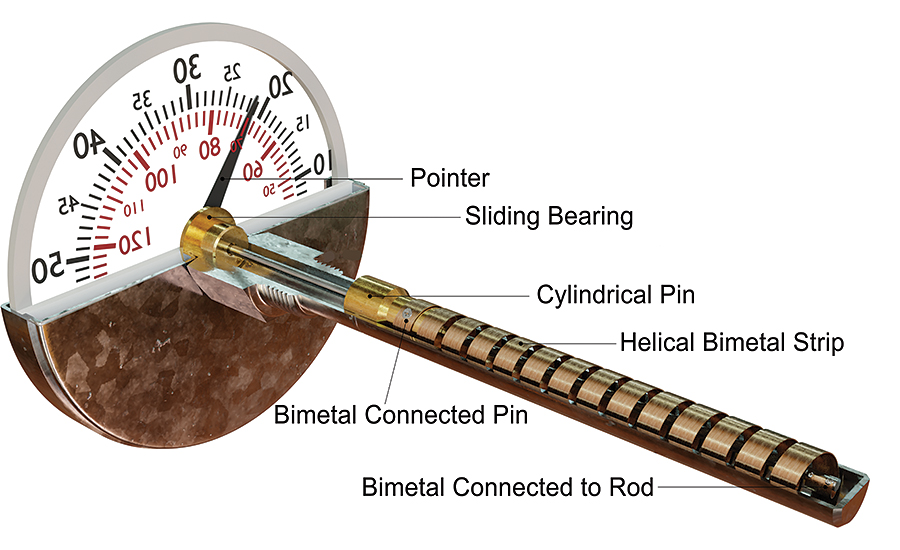 The bimetallic thermometer is accurate and inexpensive, which is why they are still widely used in industrial, commercial and residential environments.

The second type of device in this class is a resistance temperature detector (RTD). Developed after the thermistor, the RTD was created to achieve greater accuracy. Today, the RTD is one of the most accurate measuring devices available. An RTD works on the principle of changes of resistance of pure metals. The platinum RTD is the standard for high accuracy measurement. However, while these devices are far more linear and accurate than thermocouples, their response time is slower, and they are more expensive.

Let’s take a closer look at thermistors and RTDs.

Typically, thermistors are found in bead or probe designs. The bead-type device is not particularly rugged. It is compact and inexpensive, however, so it is commonly used to measure the temperature of air or other gases. Flat beads encapsulated in rectangular blocks of engineered plastic also are available. They can be glued to hard surfaces.

Probes are thermistors that are encapsulated in long tubes that are typically made from stainless steel. The probes are rugged and designed to be inserted into holes drilled into solid materials. They also can be inserted directly into fluids. 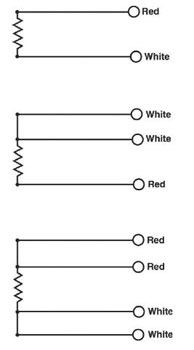 In RTDs, the current and voltage should be kept as low as possible to prevent self-heating effects. Several wiring combinations have been developed to minimize self-heating and keep electrical noise to a minimum

Thermistors can have very high accuracy, but this is affected by many factors, including the construction of the resistor material, the choice of circuitry to read the sensor and the linearization algorithms used. While the thermistor is a good choice for small measurements that do not require high precision, it is no longer considered the standard in electronic temperature measurement that it once was.

Temperature ranges for thermistors typically run from around -112 to 302°F (-80 to 150°C). A thermistor’s usable range depends on its ability to provide reasonable resistance changes over a wide temperature change.

Resistance Temperature Detectors (RTDs). The term “resistance temperature detector” technically includes thermistor devices; however, the term “RTD” has come to represent the specialized pure-metal detector rather than the more generic semiconductor resistance element. These pure-metal devices are highly accurate and stable over long periods of time, unlike the thermistor. The platinum RTD is a linear device, and its resistance changes linearly proportionally to temperature. The purity of the metal is a factor in how accurate the transducer is. Also, while platinum is the standard, nickel, copper and tungsten are used.

Also, there are RTD probes with other base resistances such as 500 and 1000 Ω at 32°F (0°C). They typically are used in lower temperature applications.

When using RTDs, other accuracy issues also must be considered. Like the thermistor, an RTD is a resistance-based device; therefore, to read the resistance, a known DC current flows through the device. The voltage generated across the resistance yields the proper temperature, but too large of a current flow can cause self-heating and affect the measured temperature. Ideally, the current and voltage should be kept as low as possible to prevent these self-heating effects. Several wiring combinations have been developed to minimize this and also keep noise to a minimum. The most popular combinations are:

The two-wire RTD configuration provides one connection to each end of the sensor. Two-wire RTDs are suitable when the resistance of the lead wire can be considered an additive constant in the circuit, and when changes in lead resistance due to ambient temperature changes may be ignored.

The three-wire RTD compensated configuration is the most commonly used. It provides one connection to one end of the sensor and two to the other end. When connected to an instrument designed to accept a three-wire input, compensation is achieved for lead resistance and temperature change in lead resistance.

The four-wire RTD connected configuration provides connections to each end of the sensor. It is used for measurements requiring highest precision. 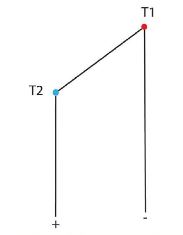 The reverse effect was discovered by Jean Charles Athanase Peltier. The Peltier effect, as it is called, shows that when a current is passed through a junction of dissimilar metals in a certain direction, the junction will heat up. If the current is passed in the opposite direction, it will cool down.

The thermocouple itself has become the industry standard for most measurement applications due to its extremely low cost, ruggedness and wide range of measurable temperatures.

Part two of this article series will look further at thermocouples and at some noncontact devices for measuring temperature. It will conclude with a discussion of the different types of control because measurement is only half of “the equation.” PC

Wayne Hayward is the director of marketing at Athena Controls. The Plymouth Meeting, Pa.-based company can be reached at 610-828-2490 or visit www.athenacontrols.com.