Industrial cooling towers are large consumers of water. With water scarcity in certain parts of the world, effective water treatment that allows increased water reuse is a driving factor influencing when and where to use cooling towers. In addition, stringent federal, state and municipal water-discharge requirements will motivate more innovative methods related to cooling tower water treatment. (It is a known fact that water blowdown has an effect on downstream water quality.) Finally, Legionnaires’ disease, or legionellosis, which has been traced to Legionella bacteria in cooling towers, will play an important factor as legislators impose tighter regulations and control on cooling tower operators.

With all this, how can we improve the current practices in industrial cooling tower water treatment?

Let’s start with some basics. Cooling towers rely on water as the means for transferring heat from an application. As such, water remains one of the best and cheapest options for liquid-cooling applications due to its thermal conductivity and heat capacity.  As water transfers heat in the cooling tower, some of it evaporates, which leads to a concentration of minerals in the recirculating water. This latent heat of evaporation effect represents 60 to 80 percent of the cooling capacity while the remainder is by sensible heat transfer. A minor quantity of water is lost via wind drift.

As water continues to evaporate, the level of dissolved solids and impurities continue to increase. If not handled appropriately, the water-carried particulate can lead to scaling, corrosion and fouling within the water circulation system.

Nearly always, the scaling culprit in cooling towers is calcium carbonate (CaCO3). Various formulas such as the Langelier scaling index (LSI) exist for determining scaling. The LSI provides a theoretical saturation indication of calcium carbonate in the water. Other water treatment formulas include the Ryznar stability index (RSI) and the Puckorius scaling index (PSI).

As operators try to minimize water blowdown, chemical and nonchemical treatment methods are deployed. Previously, chromate-based chemicals were used and provided an excellent solution; however, they are now banned because the hexavalent chromium generated is toxic. Currently, water treaters rely on phosphonates with the addition of polymer to sequester carbonate and noncarbonate scale precursors. In addition, as cycles of concentration increase, so does the pH, which provides a basis for reducing corrosive conditions in water.

Another important aspect in maintained cooling tower water is bacterial control. The ramifications of failing to do so are much more important compared to scaling situations. Cooling towers provide an ideal environment for bacterial development: warm water temperatures, nutrients from the environment, and sunlight. Improper microbiological control can lead to biofouling, resulting in poor heat transfer in the chiller tubes from biofilm development as well as propagation of Legionella bacteria that can lead to legionellosis. According to the Centers for Disease Control and Prevention (CDC), in 2016, as many as 6,100 cases of Legionnaires’ disease were reported, of which 10 percent were fatal. Because the number of true cases of Legionnaires’ disease may be under-diagnosed, the 6,100 figure may represent an underestimate of the true number of incidences. 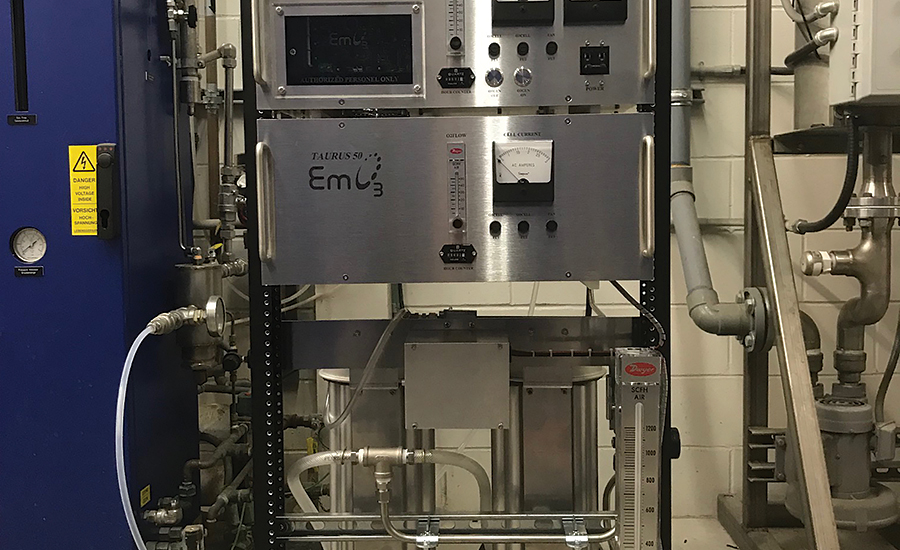 Ozone has been used for decades as a primary disinfectant for industrial and municipal water treatment. Ozone possesses one of the highest redox levels compared to other oxidizing biocides, making it suitable in neutralizing waterborne bacteria.

Chlorine Gas. The reaction of chlorine gas and water results in hypochlorous acid, which is the killing agent. The problem with chlorine gas is that it is dependent on pH. Typically, it is effective at pH lower than 7.5. As the cycles of concentration increase, so does the water pH. As a result, operators need to dose acid to reduce the pH level. Also, chlorine gas is regulated by the Chemical Facility Anti-Terrorism Standards (CFATS) of U.S. Homeland Security, causing more administrative followup for operators.

Sodium Hypochlorite. Cheaper than chlorine gas, sodium hypochlorite also is impacted by pH levels. In addition, high organic load can lead to chloramines as well as disinfection byproducts that can be found in the water blowdown. This is already under review by regulators.

Bromine. More stable and effective in alkali waters, bromine often is used in cooling tower water treatment. In addition, it does not produce harmful chloramines. The disadvantage is that the extreme reactivity of bromine in water requires frequent dosing. In addition, bromine is more expensive than sodium hypochlorite.

Chlorine Dioxide (ClO2). Chlorine dioxide is starting to become more popular because it is not affected by pH and does not form halogenated organic compounds. This method also is effective in attacking biofilms. Because chlorine dioxide is unstable, however, it must be produced on-site by mixing hydrochloric acid and sodium chlorite. The main disadvantage is the handling and storage of two dangerous chemical substances. Also, because chlorine dioxide can be five to 10 times more expensive than chlorine, cost may be an issue. 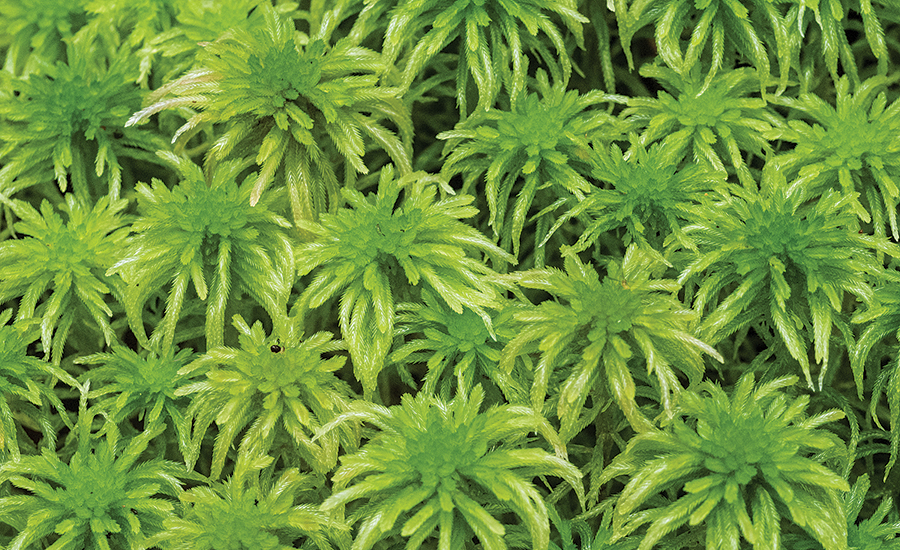 Sphagnum moss has been used for centuries for water and food preservation. The moss’s ability to naturally absorb impurities such as calcium, magnesium and other metals results in reduced scaling and corrosion problems.

In spite of decades of proven chemical solutions for effective water treatment in cooling towers, there is a growing interest in utilizing more sustainable solutions. These methods promise to reduce chemical consumption, improve water turnover and limit toxic chemical discharges to the environment. Some of those that follow are worthwhile considerations in order to assist operators in improving their ecological footprint while providing effective water treatments measures.

Sphagnum Moss. This plant has been used for centuries for water and food preservation. The moss’s ability to naturally absorb impurities such as calcium, magnesium and other metals means it can be used to minimize scaling and corrosion problems. Its ability to inhibit organic contamination can assist in reducing biocidal costs. Also, hydrogen ions are released in the exchange process, providing neutralizing alkalinity to lower pH levels in the water. Once the moss is saturated, it must be removed. It can be disposed of locally as an organic material, making it an interesting ecological product.

Electromagnetic Current. For several years, electromagnetic current technology has been deployed to limit scale deposition as well as reduce biofilm buildup. Typically, the technology induces an AC current in the water circuit of the cooling tower. The induced magnetic fields modify the ionic surface charge of the particles in the water. This, in turn, results in the attraction of the calcium and carbonate to rapid nucleation and growth of calcium carbonate as a powder instead of being deposited on mechanical surfaces.

Ozone. Ozone has been used for decades as a primary disinfectant for industrial and municipal water treatment. Ozone possesses one of the highest redox levels compared to other oxidizing biocides, making it suitable for neutralizing waterborne bacteria. Ozone is very reactive and is produced on-site using ambient air, thus making it an attractive sustainable solution for cooling tower owners.

In conclusion, as a result of more stringent discharge limitations by federal and state regulation, combined with an increased desire to reduce chemical costs while also effectively treating water for cooling towers, operators are seeking more sustainable and effective solutions. In light of increased awareness of Legionella outbreaks, regulators will impose more requirements on cooling tower owners to proactively reduce their contamination risks. Interesting solutions are available on the market as the industry continues to evolve. PC