A primer on thermocouples — the most widely used temperature-measurement devices — also explores instruments to control temperature in industrial processes.

The versatile thermocouple is the most widely used industrial temperature-measurement device. Thermocouples are made by joining two pieces of dissimilar wire, and they can be sized by the gauge of wire used. When using a thermocouple, the temperature measurement occurs only at the actual interface between the two metals comprising the thermocouple, so the measurement area can be as small — or as large — as needed. It is critical that the wires are well insulated and similar all the way to the reading junction. Any missing insulation, or a junction with extension wire of dissimilar material, will become a new thermocouple and source of error.

Thermocouples are offered in many materials, and each pair has different characteristics of temperature range and voltage. The voltage produced by the thermocouple is always small — in the millivolt range — and is nonlinear. Deriving the temperature from the voltage produced requires that the output be matched to a lookup table or fed through a polynomial curve formula to return an actual temperature. Table 1 shows some common thermocouple sets and their basic parameters. Types J, K and T are the most commonly used in industrial processes with Type J being the most popular.

Thermocouples and wires are offered in packages and insulations to handle the assortment of applications; consequently, many probes and sheath materials are offered. Probes are a type of packaged device where the temperature sensor — typically a thermocouple — is sealed inside a tube constructed of stainless steel or other materials. Probes can be open or closed depending on the application. 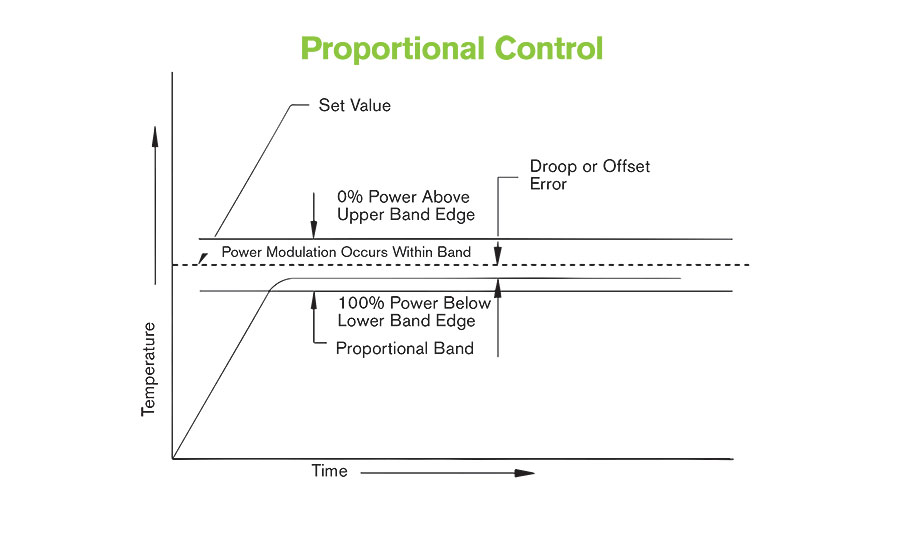 Proportional-only controllers may be used where the process load is fairly constant and the setpoint is not frequently changed. 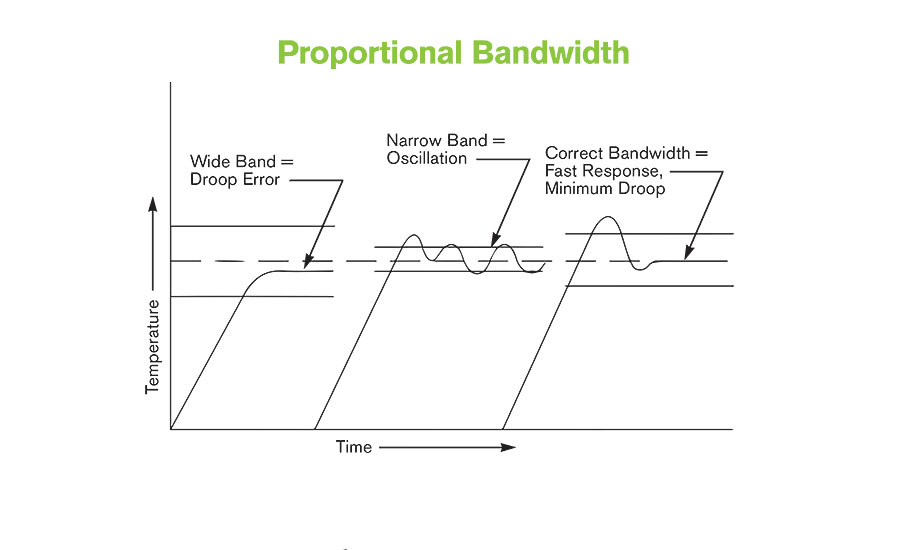 Proportional-only controllers may be used where the process load is fairly constant and the setpoint is not frequently changed.

Table 1 shows the typical temperature limits of some standard thermocouple configurations. The temperatures listed are considered to be the extremes of the operating ranges. Accuracy of thermocouples is based on the purity of the wire and the wire junction, but it is helpful to understand the theory behind thermocouples to appreciate the right selection of thermocouple for the application. Precise measurements of the current, resistance and electromotive force were made as part of an investigation of thermoelectric circuits that resulted in the establishment of several basic laws. 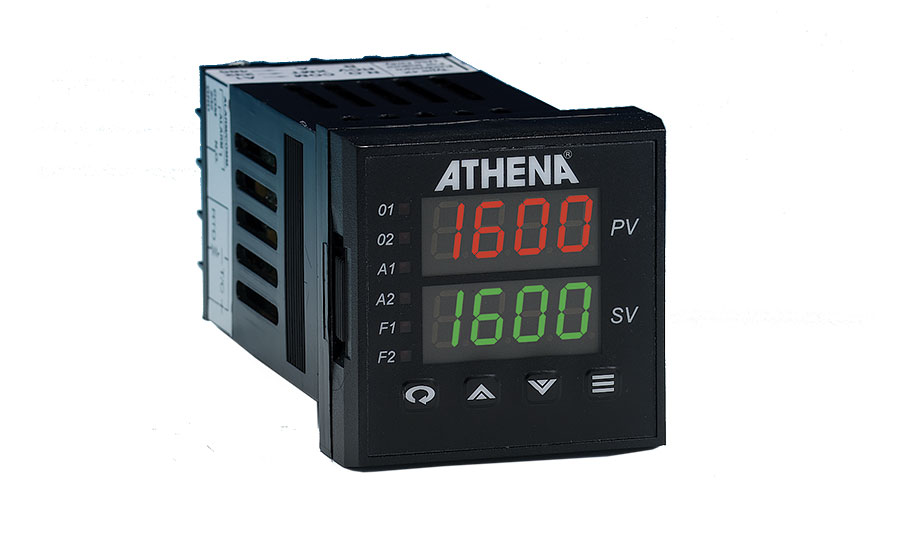 Measuring the temperature is just half of the equation. What you do next — to either increase, decrease or stabilize the process temperature — is a critical part of the control cycle.

Semiconductor probes are the third main category of probe. Like a resistance probe (covered in the first part of this article series), they require a current or voltage supply to create a reading. But, this is where the similarity ends.

A semiconductor probe is essentially a temperature-variable resistance device that converts the change in resistance to a change in current. These devices typically do not have the accuracy of an RTD due to manufacturing tolerances; however, they are extremely cost effective for large-volume applications. They have a relatively large initial tolerance, or absolute offset, but this is countered by a high level of repeatability. Because they are not as accurate as an RTD or thermocouple, they have not found favor in many modern manufacturing applications.

Noncontact temperature sensors typically consist of optical devices that detect and measure radiant heat. Measuring this radiation makes it possible to determine the temperature of the object, both up close or from a vast distance.

Single-Reading Devices. Single-point reading devices are worth a mention, but they really only apply to temperature measurements of large objects (or at least the outside surface of said object. When using single-reading devices, it is helpful if there is a significant temperature difference between the object and its surroundings.

Single-reading devices work by allowing the heat radiation from an object to strike an infrared-sensitive element via a system of lenses. These systems require that the user know the spectral emissivity of the material for which the temperature is being measured in order to obtain an accurate reading.

Camera Field Devices. There are several types of camera field-temperature sensors. Generally, they are similar to a digital camera but they light in the infrared range of the light spectrum. The different types are distinguished by the wavelength range of infrared measured. These include near infrared (with wavelengths from visible light to 1000 nm) and far infrared (with wavelengths over 1000 nm). These devices take pictures of objects and display the varying temperatures as different intensities or colors visible to the human eye. 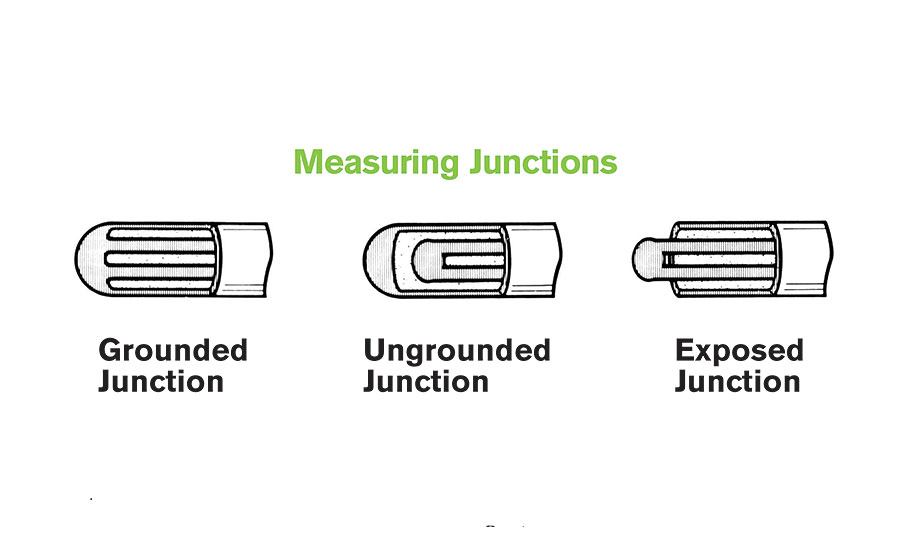 When using a thermocouple, the temperature measurement occurs at the actual interface between the two metals comprising the thermocouple, called the junction. The measurement area can be as small or large as needed. The wires must be well insulated and similar all the way to the reading junction.

Measuring the temperature is just half of the equation. What you do next — to either increase, decrease or stabilize the process temperature — is a critical part of the control cycle. Several types of control, which use different methodologies to effect control, are available. The following is a short summary. For brevity’s sake, this article will only consider one zone of control.

On/off control — where the output of the control is simply switched on or off as needed — is the most basic control method. On/off control has two states: fully off and fully on. To prevent rapid cycling, some hysteresis is added to the switching function. During operation, the controller output is on from startup until temperature set value is achieved. After overshoot, the temperature then falls to the hysteresis limit, and power is reapplied. 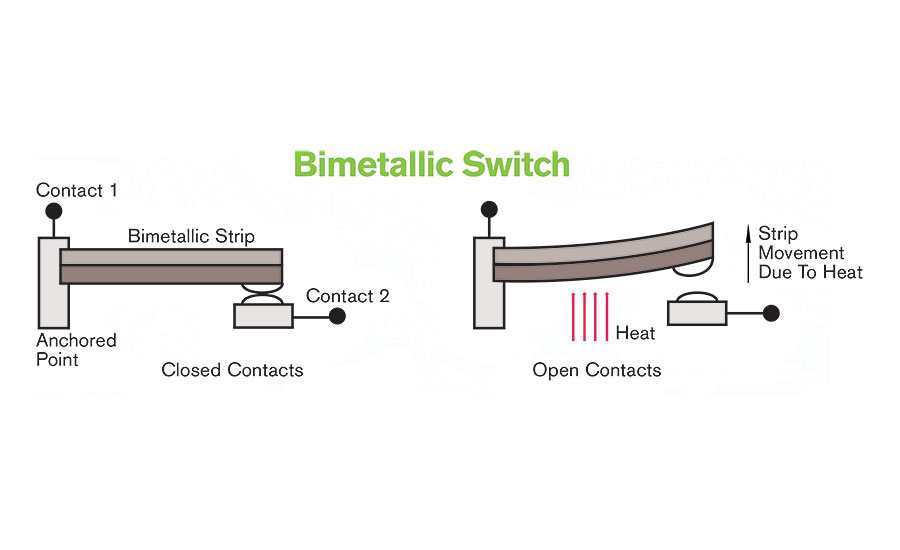 The earliest control systems were simple switches that used bimetallic elements. By placing a bimetallic element where its expansion motion can cause a contact to be made or broken, and attaching a wire to the element and contact, a simple temperature switch is created.

On/off control can be used where:

Manual Reset. Allows positioning the band with respect to the setpoint so that more or less power is applied at setpoint to eliminate the offset error inherent in proportional control.

Proportional-only controllers may be used where the process load is fairly constant and the setpoint is not changed frequently. Three options are:

PI Controls. Integral action moves the proportional band to increase or decrease power in response to the temperature deviation from setpoint. The integrator slowly changes power output until zero deviation is achieved. Integral action cannot be faster than the process response time or oscillation will occur.

PD Controls. Derivative moves the proportional band to provide more or less output power in response to rapidly changing temperature. Its effect is to add lead during temperature change. It also reduces overshoot on startup.

The earliest control systems were simple switches that used bimetallic elements. By placing a bimetallic element where its expansion motion can cause a contact to be made or broken, and attaching a wire to the element and contact, a simple temperature switch is created. 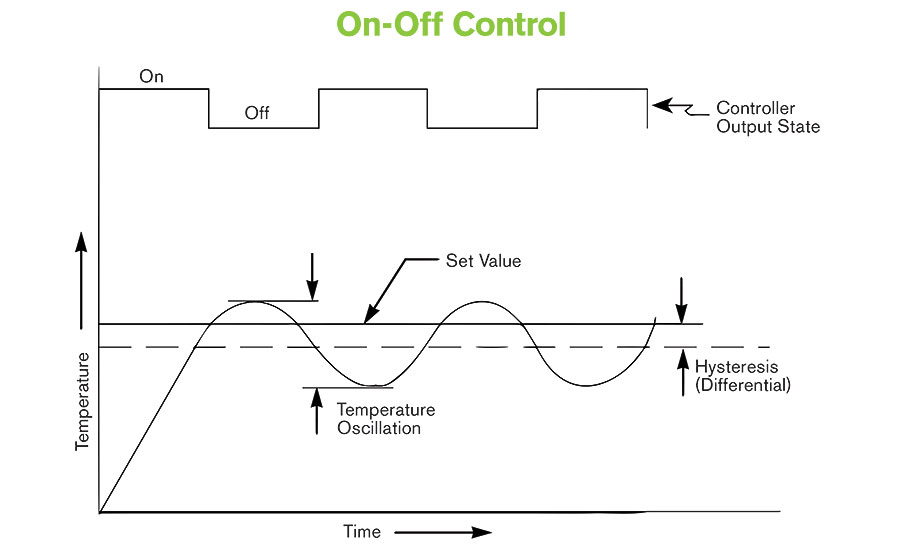 On/off control is the most basic control method, where the output of the control is simply switched on or off as needed.

It is easy to see how such a simple switch could have many applications. This basic on/off temperature control system is still in use today where changing the gap to the contact changes the set temperature at which it will make contact.

Today, there are plenty of capable controllers that provide sophisticated and varied types of control, including dedicated PID controllers, PLC controllers and PC controllers. Selection is mostly determined by the application and process. PC

Wayne Hayward is the director of marketing at Athena Controls. The Plymouth Meeting, Pa.-based company can be reached at 610-828-2490 or visit www.athenacontrols.com.