Cooling corrosion-control programs have traditionally utilized phosphate, metals or film-forming chemistry. As cooling water cycles in concentration, the aqueous environment becomes more corrosive due to elevated conductivity, chlorides and sulfates. In addition, adequate microbiological control, including that for Legionella, requires the use of elevated levels of oxidizers such as bleach, peroxide, chlorine dioxide and ozone. When corrosion issues are discovered via monitoring or inspections, it is often unclear, without a post-mortem analysis, what the mitigation steps may be.

Phosphate has been a suitable replacement for chromium in cooling systems, and it can be used in conjunction with other metals such as zinc to provide excellent corrosion protection over a range of conditions. The use of phosphate often requires advanced polymer technology to prevent fouling due to calcium or metal phosphate. Unfortunately, swings in operating conditions such as pH, temperature and cycles can result in the fouling of heat exchangers and surfaces. To account for these operating windows requires increasing the concentration of advanced polymer technology to ensure asset protection.

While phosphate is a nontoxic alternative to the use of transition metals for corrosion control, as a micronutrient for biological growth, phosphate promotes bacteria growth such as Legionella and biofilms within the cooling loop. Additionally, when directly discharged to bodies of water, phosphate seeds toxic algae blooms.

Phosphate primarily is used for low carbon steel metallurgy. Copper metallurgies are ubiquitously treated with benzotriazole derivatives: benzotriazole (BZT), tolyltriazole (TTA) and chloro-tolyltriazole (Cl-TTA). Utilizing surface analytical techniques, it has been shown that increasing corrosivity in combination with oxidizer concentration either removes azole films from the surface or inhibits their ability to form a film. This leaves yellow metal surfaces inadequately protected, leading to localized corrosion such as de-alloying, advanced general corrosion and elevated levels of soluble copper. Increasing levels of soluble copper in the cooling stream can promote galvanic corrosion on low carbon steel surfaces or result in the violation of discharge limits when directly released into the environment. 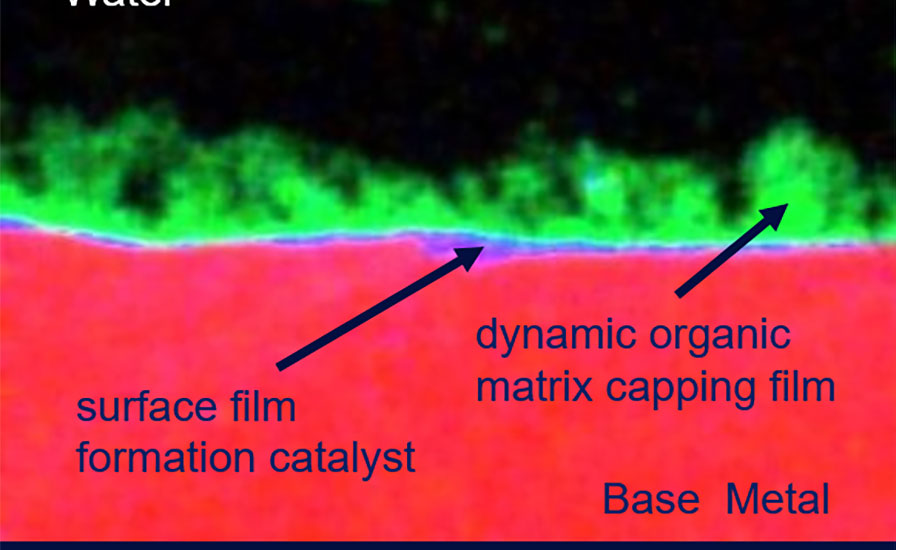 These two new approaches take advantage of advanced scaling-salt-saturation modeling and data analytics to establish control ranges and selected chemistry. The chemistry selected for each application, or yellow metal protection, was chosen based on complementary ion interactions to construct designed surface films for corrosion control.

Engineered carboxylate oxide film does not rely on the addition of phosphate. This allows many common scaling salts — that is, calcium and zinc phosphate — to be below saturation. Fouling concerns are reduced significantly vs. standard phosphate corrosion-control programs. In addition, the engineered carboxylate oxide film only uses organic inhibitors that consist of the elements carbon, hydrogen and oxygen (C-H-O inhibitors) for corrosion and salt inhibition. 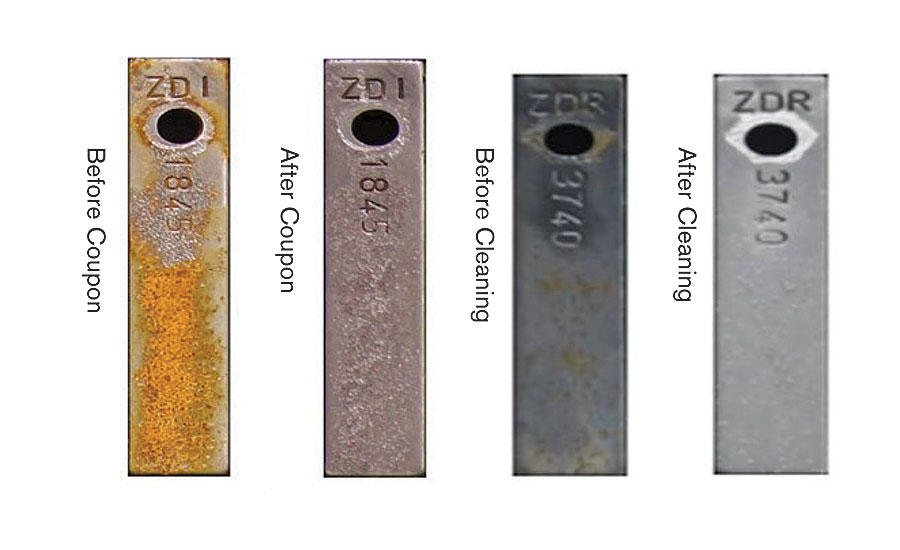 One proprietary engineered carboxylate oxide film was developed to address this rising concern with traditional cooling programs. The program does not add phosphate or use organophosphonate for corrosion or deposition control. For deposition and corrosion control, C-H-O inhibitors are used to template and build a designed surface film. To accelerate and construct this designed surface, some water qualities will require the use of a surface film formation catalyst, or SFFC. The catalyst enriches the metal-water interface, providing a nanometer-thick protective film. This film then is primed for the C-H-O inhibitor to work with the cycled water components to form a capping layer (figure 1). 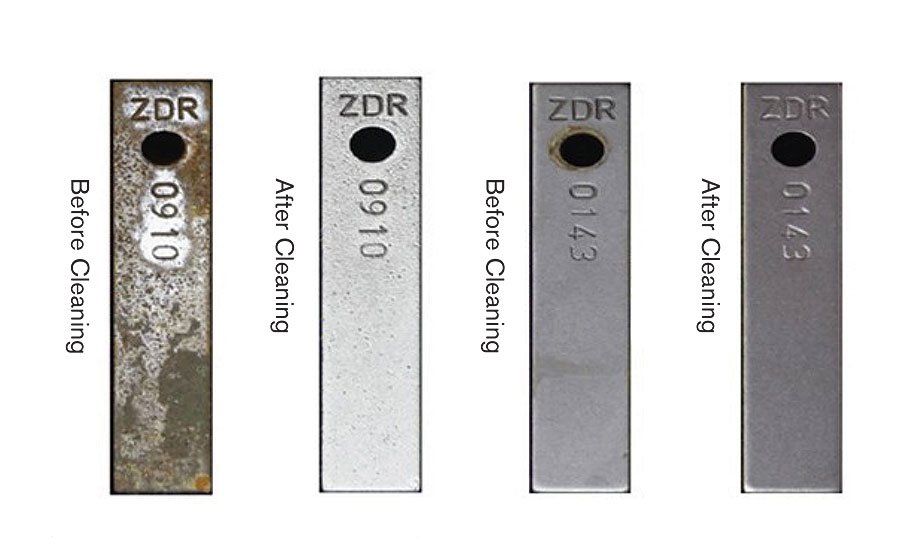 A case in point helps illustrate the program. A power station bordering the Great Lakes proactively pursued a no-added phosphate and organophosphonate corrosion-control program to comply with future phosphorus discharge regulations. The cooling effluent is directly discharged into the lake. The performance targets for corrosion required equal or improved corrosion control of less than 3.0 mpy. Makeup water had no available phosphate upon cycling for adequate corrosion control. A modified proprietary engineered carboxylate oxide film program was applied with just the surface film formation catalyst. It complied with the criteria of no-added phosphate or organophosphonate cooling program. Since the application of the surface film formation catalyst, 30-day coupon pulls met the less than 3.0 mpy criteria (figure 2a).

In another example, a mid-Atlantic chemical plant had consistent fouling and corrosion issues associated with using a traditional phosphate program. The proprietary engineered carboxylate oxide film provided an alternative solution. No phosphate was used for low carbon steel protection. A proprietary engineered carboxylate oxide film program was designed to use the C-H-O inhibitor with the surface film formation catalyst. Fouling issues seen with the traditional program were mitigated with the new engineered carboxylate oxide film program. Fouling was monitored via an online deposition monitor with a heat transfer sleeve and representative flow from a bypass stream. The phosphate program delivered elevated corrosion rates with general and localized corrosion on 30-day coupons. The no-phosphate added program consistently achieved less than 0.5 mpy on low carbon steel (figure 2b). Also, it mitigated previous fouling issues associated with a phosphate-based corrosion-control program.

Designed Films for Corrosion Protection Engineered copper film technology (ECF) differs from the previous examples because it works with traditional phosphate programs to form corrosion protective films on copper and iron metallurgies. The approach was rationally designed, applying similar methods as a proprietary engineered carboxylate oxide film: construct robust (to chlorides and oxidizers) surface films with chemistry that uses the cycled cooling water. The inhibitor has been shown to improve on known weaknesses of traditional azole chemistry: negative toxicity profile, inability to fully form surface films in the presence of oxidizer, destruction of surface films by oxidizers, incompatibility with elevated levels of oxidizers in compliance with Legionella control and inability to protect metals when chlorides increase above 1,000 ppm.

Engineered copper film technology inhibitors are approximately 10 times less toxic than traditional benzotriazole derivatives and, when used in a cooling treatment program, improve the overall toxicity profile. A field trial was conducted at a refinery using reuse (tertiary wastewater) water when at cycles had chlorides approximately 1500 ppm, conductivity 6500 umhos and bleach levels greater than 0.5 ppm. Traditional benzotriazole chemistry resulted in 30-day coupons achieving a wide range of results, from 0.1 to 1.0 mpy. Coupons with traditional chemistry displayed the hallmarks of plug dezincification that often resulted in corrosion rates increasing with exposure time. Even though there were signs of potential copper corrosion, the traditional azole chemistry sequestered the soluble copper and low carbon steel. The trial goals, given the challenging conditions, were to mitigate the dezincification and provide 30-day coupons that consistently achieve the performance criteria of 0.3 mpy. Additional monitoring of the coupons was done with a retractable coupon holder just after the heat exchanger. 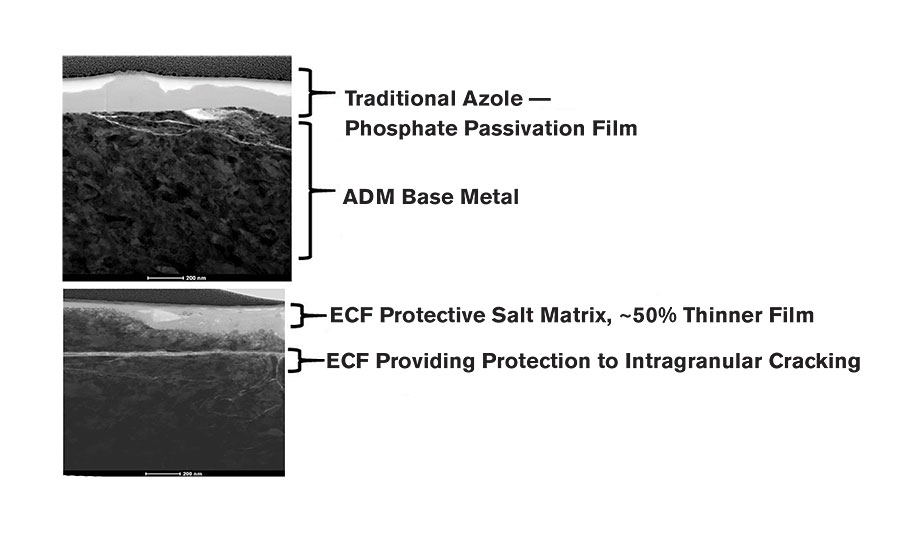 Engineered copper film technology worked with the Ca, PO4, SiO2 and CO3 ions to form protective films. These films, similar to the proprietary engineered carboxylate oxide film, form a thin, densely packed layer that is much thinner than traditional calcium phosphate films. Throughout the trial, the 30-day coupon values improved and met the performance target. During one 30-day period, there was a hypochlorous acid overfeed with an estimated ≤100 ppm free residual chlorine. The 30-day coupon during this period was higher (0.6 mpy) and did not show any signs of dezincification. The coupon itself was unremarkable. Coupons from the retractable coupon holder consistently measured 0.1 mpy even though the heat exchanger exit temperature is approximately 30 to 40°F (16.7 to 22°C) higher than the coupon rack. During the trial, there was no change in the low carbon steel corrosion rates (less than 0.5 mpy), and the amount of measured copper was 50 to 75 ppm.

A cross-sectional analysis of the protective film from the retractable coupon reveals the structure and chemistry of the designed film. The protective film is thin and dense, and it fully covers the surface. The surface analysis from the coupon revealed intragranular cracking as a result of the aggressive conditions and elevated temperatures. Interestingly, when performing line scans from the top of the film down into the base metal, the intragranular cracks had a large amount of carbon present. The higher amount of carbon suggests the inhibitors used to design passivation films for metals in phosphate programs can penetrate these small areas and provide protection.

Constructing designed protective films is a new and exciting concept for corrosion control in recirculating cooling systems. The approach provides immediate solutions for existing phosphate programs struggling to meet performance standards with yellow metal and low carbon steel with engineered copper film technology. Additionally, this approach was able to provide a solution with no phosphate or organophosphate applied with proprietary engineered carboxylate oxide film technology. Each approach relies on the use of selected chemistries that work synergistically with the ions in cycled cooling water. The surface film formation catalyst adds an extra component to the proprietary engineered carboxylate oxide film corrosion program by further enhancing the protection of the metal interface and templating the capping matrix with C-H-O inhibitors. In summary, engineered film technology designs protective films by understanding the relationship between chemistry, water quality and desired film chemistry for the robust protection of a range of recirculating cooling conditions. PC

Paul Frail is a senior engineer with Suez Water Technologies & Solutions. The Trevose, Pa.-based company can be reached at 215-633-4501 or visit www.suez.com.