This website requires certain cookies to work and uses other cookies to help you have the best experience. By visiting this website, certain cookies have already been set, which you may delete and block. By closing this message or continuing to use our site, you agree to the use of cookies. Visit our updated privacy and cookie policy to learn more.
Home » Baked Goods Producer Selects Ammonia Liquid Chillers to Accommodate Plant Growth
Ammonia RefrigerationHeat TransferChillersCompressors/CondensersRefrigeration SystemsFood Processing
Refrigeration Systems

German bakery Wolf ButterBack selected chillers designed with a semi-hermetic compact screw compressor when it was expanding a facility and wanted to accommodate future growth.

Fürth-based Wolf ButterBack KG is a specialist in Danish pastries, which the company produces for bakeries. The bakeries receive the pastries frozen and ready-to-bake in-house to sell to their customers.

Wolf ButterBack’s methods are recipes for success: The first plant was opened in the German town of Fürth around 20 years ago. Since then, three additional facilities have opened at the site. In 2018, production began at the third plant after a short, 18-month construction period. The facility houses space for 10 production lines, three of which have been set up thus far. At the same time that Plant 3 was constructed, an automated, deep-freeze high rise storage facility was built.

The technology center in Plant 3 at Wolf ButterBack is designed to accommodate growth, so further facilities can be added as production capacity is expanded. Key among the equipment used to satisfy Wolf ButterBack’s production demands are two compact screw chillers installed in Plant 3. In addition, the food processor added a third liquid chiller — their first ammonia liquid chiller — in the form of a semi-hermetic compact screw compressor. Two years of operation have shown that the “new” system can hold its own against its sister systems. 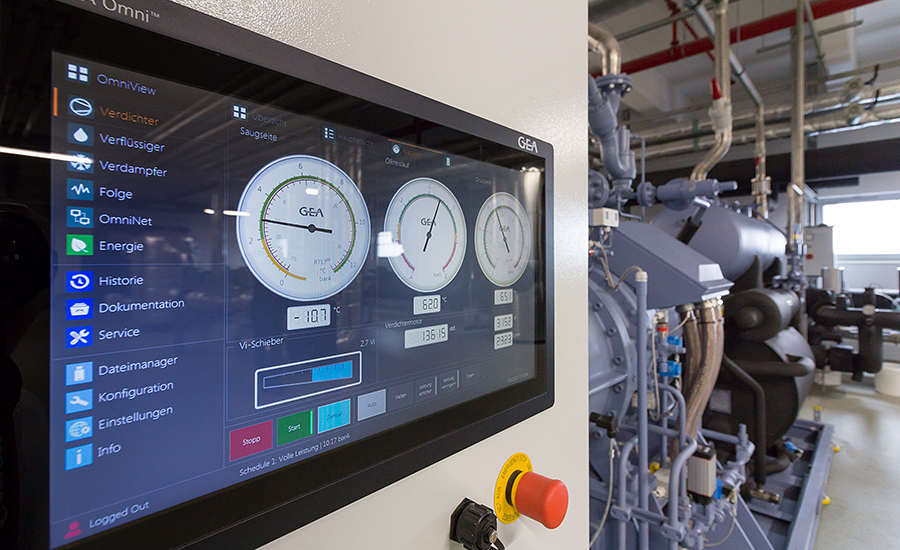 The control panel of the liquid chillers utilizes a high definition, multi-touch interface.

The air-conditioning and cooling technology in Plant 3 was designed by the cooling system planners and Jens Geyer, head of cooling technology at Wolf ButterBack. The plan was designed to satisfy current needs while also looking to the future, allowing goals to be met in terms of energy efficiency, operational reliability, and environmental and climate protection. This was made possible using two ecologically friendly natural refrigerants, ammonia (NH3) and carbon dioxide (CO2). Also, in the new plant, propane is being used as a refrigerant for the first time at Wolf ButterBack — in this case, in an air-conditioning system.

The plant and the deep-freeze storage facility both make demands in terms of heating and cooling. “The plant needs a lot more cooling power than the storage facility,” explains Geyer. Among those areas placing demands on the cooling equipment are the refrigeration rooms, spiral freezer, raw material storage facility, pastry blast chiller, ice water supply system, and air-conditioning for the production halls. The three spiral freezers alone require up to 1050 kW of cooling power for several minutes when starting up or following a break in production. This means that the cooling technology must respond quickly to load changes. With the new cooling system, Geyer and his team have created this flexibility.

Anyone who visits the central cooling plant will notice one thing in particular: space. This is partly because the planning team already has made provisions for future expansion. Ultimately, the cooling capacity will be able to support up to 10 production lines. As production ramps from three lines to 10, even the final configuration of the central cooling plant will allow for a generous amount of space between the facilities. The firm Weska Kälteanlagen GmbH also benefitted from the spacious setup when their team installed the cooling technology at Wolf ButterBack. 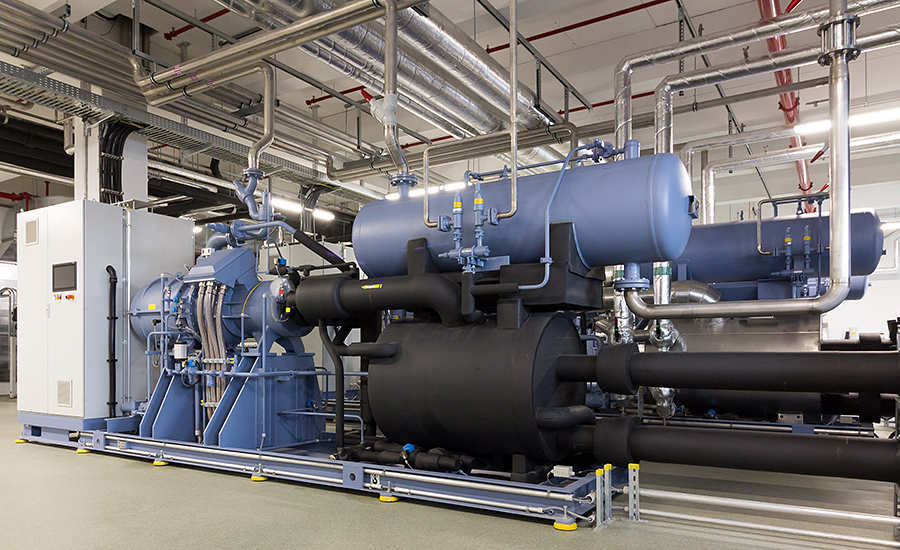 The semi-hermetic ammonia screw compressor requires less space than previous designs, but it offers similar performance. The compressor is based on another of the company’s designs and has no external piping.

The central cooling plant comprises three systems: heat recovery, ammonia and carbon dioxide. The heat-recovery system ensures that the waste heat that is constantly being produced by the cooling systems is used for the fermentation rooms, the hot water supply or for heating. The waste heat also can heat the brine for defrosting the refrigeration room vaporizers and brine chillers.

As the first stage in a cascade, the ammonia liquid chillers deliver refrigerant at 14°F (-10°C). They work together in a brine cooling circuit.

The CO2 systems form the second stage of the cascade and provide refrigerant at -25.6°F (-32°C) and lower. The ammonia/CO2 cascade offers several advantages. During the first stage, when the ammonia liquid chillers bring the brine down to 14°F (-10°C), the benefits of the natural refrigerant ammonia come to fruition. In this case, during the first stage, high specific volume cooling capacity coupled with excellent efficiency of the system components is achieved. In the lower temperature range of -25.6°F (-32°C) and below, the CO2 systems are very effective. Also, based on the physical properties of CO2 the cooling power can be achieved by a relatively small mass flow. Therefore, pipes with small diameters can be used to save on space and materials. 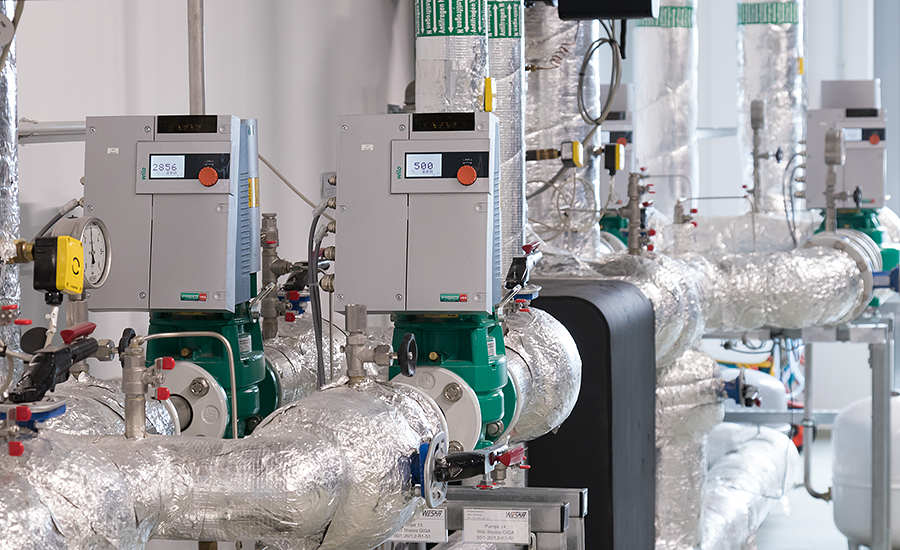 No energy is wasted. At Wolf ButterBack, the waste heat from the cooling systems is used to supply hot water and heating.

For the first stage of the cascade, the performance of one ammonia liquid chiller was sufficient for the existing production capacity. A second system was set up as a reserve to allow one of the machines to be taken out of operation for maintenance and repair work if necessary.

In total, however, Wolf ButterBack has installed three liquid chillers. Upon closer inspection, it is evident that one chiller looks different than the two neighboring chillers. “The third is a pilot system,” explains Geyer. “As we only had to use two of the five spaces for ammonia liquid chillers in the first stage of expansion, [the chiller manufacturer] GEA was able to set up their new model here for a field test.”

Based on the chiller manufacturer’s first semi-hermetic ammonia screw compressor, the new liquid chiller has a more compact design than the driveline and oil separator of the other chillers. It provides nearly the same level of performance: The liquid chiller provides 600 kW of cooling capacity when in use at Wolf ButterBack. The ammonia liquid chillers installed next to it only delivers approximately 100 kW more.

The compact construction involves a three-in-one design, where the suction gas-cooled motor, compressor and oil separator are screwed together to form a gastight seal. The shaft does not have to be sealed, and all of the external piping — to and from the oil separator/oil cooler, including the oil filter — of open compressors has been integrated. This design essentially eliminates the risk of leakage.

The reliability is less important at Wolf ButterBack, where the liquid chillers are installed in a technology center on the top floor, than when the cooling systems are set up in the basement. Nevertheless, its low specific refrigerant charge of no more than 50 g per kW offers additional reliability. The semi-hermetic ammonia screw compressor unit is classified as a low ammonia content chiller. 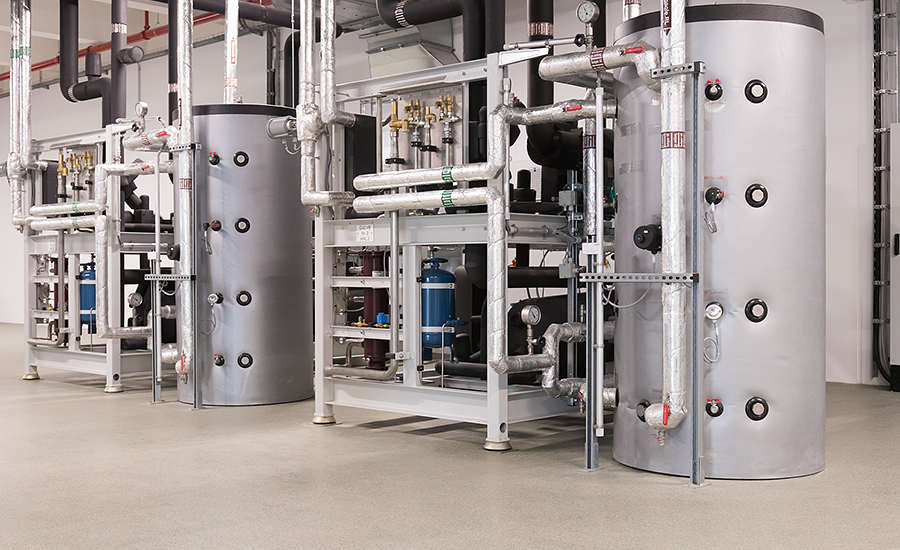 Multiple CO2 cooling systems work as the second stage of the cascade and provide cooling between -25.6 and -43.6°F (-32 and -42°C), depending on system requirements.

Efficient When Operating with Partial Loads

In terms of its cooling technology, similarities exist between the semi-hermetic ammonia screw compressor installed in the new chiller and other compressors from the company. For example, the semi-hermetic ammonia screw compressor has the Vi internal volume ratio control that permits automatic, continuous adjustment across a broad range. This is important for air-cooled chillers given the large variations in condensing temperatures throughout the year. Together with the broad range of speeds between 1,200 and 5,200 rpm, this flexible chiller can operate with a high efficiency, whatever the load. With this high speed, the nominal swept volume at peak load is exceeded by 75 percent. For typical air-conditioning applications with supply/return flow temperatures of 43°F/54°F (6°C/12°C), this produces a maximum cooling capacity of 1,300 kW or 1,600 kW, depending on the model.

The control panel utilized on all of the liquid chillers controls all the operating conditions of the chillers and records error notifications for subsequent analysis. As the master, the control panel on one of the semi-hermetic ammonia screw compressor takes over control of all three chillers. This functionality of the control panel — sometimes called sequence control — allows multiple chillers in a system to be controlled centrally via one control panel.

Sequence control focuses not just on equalizing the load hours across all the available chillers but also on energy management. For example, when the power consumption amounts to more than the capacity of one chiller, the sequence control feature calculates the optimum regime in terms of energy consumption when multiple chillers are in operation. Furthermore, if the master fails, the liquid chillers return to their device-specific control settings and continue to function autonomously. This is a great advantage if — like at Wolf ButterBack — availability is one of the main requirements of the cooling systems.

The multi-touch interface allows the user to operate their system with maximum efficiency. To do this, the control unit incorporates all the important elements of a cooling or gas compression system — from the main components to individual valves and pumps. This provides users and service technicians with transparency and control over the system. Authorized users can access and operate the control panel locally or remotely via a tablet or smartphone.

Chiller Proves Itself Three Times Over

The ammonia liquid chiller with the semi-hermetic ammonia screw compressor proved itself in three installations. In addition to the system at Wolf ButterBack, a second system was put through its paces in an industrial capacity. The two systems have been operating almost constantly for two years and have proven their reliability.

A third ammonia liquid chiller with the semi-hermetic ammonia screw compressor has been installed to provide air-conditioning. This is where it is expected to see its greatest demand. The semi-hermetic ammonia screw compressor — the core component of the chiller — is designed for maximum reliability when installed in office buildings, laboratories, hotels or similar buildings with a lot of people.

Features that ensure this reliability include the low specific refrigerant charge, the semi-hermetic design with no external piping, and the construction method that means the shaft does not have to be sealed.

Geyer can attest to the semi-hermetic ammonia screw compressor providing the requisite flexibility at Wolf ButterBack. “The new chiller has been in use at our company for around two years. During this time, [it] has logged approximately 15,000 operating hours, meaning it has been in operation almost 24/7.”

Even on the hottest summer days, the liquid chiller with the gas-cooled compressor worked well and responded to load changes. “In terms of flexibility, I was already impressed by the GEA machines we have in Plant 1,” says Geyer. “Because of this track record, my expectations were high and I was in no way disappointed by the [liquid ammonia chiller] with the new compressor,” adds Geyer.

According to Wolf ButterBack, the liquid ammonia chiller with the semi-hermetic screw compressor has performed so well as a base-load machine in the field test that the neighboring chillers were barely used. “But they are not surplus to requirements,” explains Geyer. “When further production lines are added to Plant 3 as part of its expansion, the cooling requirements will also increase.”

Given the growing demand for Wolf ButterBack products, it will not be long before a fourth and fifth liquid chiller are needed. And it is perfectly possible that these will both be liquid ammonia chillers with the semi-hermetic screw compressors. PC

Dr. Michael Golek works with corporate media and press with GEA Group. The Düesseldorf, Germany-based company can be reached at +49 211 9136 1505 or visit www.gea.com.