Rerouting the chilled water and condenser water flow through two chillers in opposite directions can lead to improved system efficiency.

Engineers and plant owners are always looking for designs to decrease the overall energy consumption of mechanical cooling systems. With features such as magnetic bearings, improved compressor aerodynamics and new heat exchanger designs, chillers have become exponentially more efficient. To achieve further gains in applications where modern chillers already are installed, you must look outside of the chiller and find opportunities at the plant.

One of the system modifications to consider is the use of a chiller piping strategy called series counterflow (SCF). Routing the chilled water flow and condenser water flow through two chillers — in opposite directions — can lead to improved overall system efficiency.

In a typical design with multiple chillers, the chillers are placed in a parallel scheme, where each chiller has the same cooling capacity (figure 1). This requires a dedicated cooling tower per chiller along with identical chilled water setpoints. This design is most common across the industry due to the simplicity of the controls, plant layout and chiller configuration.

A chiller’s efficiency level is based on the amount of electrical power (kilowatts) that is consumed to produce an output of chiller cooling capacity (tons of refrigeration). The amount of kilowatts consumed is dictated by both the lift and load (cooling capacity required) of the chiller. Lift, the amount of work the chiller has to overcome, has a much bigger impact on the efficiency of the chiller than the percent load. Lift can be calculated by taking the difference between the leaving condenser water temperature and the leaving evaporator water temperature. A reduction in lift equates to efficiency savings.

FIGURE 2. The entering and leaving water temperatures of two chillers piped in a series counterflow arrangement are shown. This schematic shows a 100 percent load scenario when using variable primary flow pumping scheme, with the corresponding flow rate for a 1,000-ton SCF pair.

The industry standard for some chiller conditions is set by the Air-Conditioning, Heating & Refrigeration Institute (AHRI), which helps certify chiller performance. Industry-standard conditions include the use of water in both the evaporator and condenser, with the evaporator temperature split of 54°F (12°C) entering water with 44°F (6.66°C) leaving water, and the condenser temperature split of 85°F (29°C) entering water temperature and 94.3°F (34.6°C) leaving water temperature. For simplicity, the examples in this article will utilize 95°F (35°C) instead of 94.3°F.

In the parallel system example (figure 1), the cooling system provides 1,000 tons of refrigeration at 44°F (6.66°C) chilled water temperature to the plant. When the series counterflow (SCF) strategy is implemented, the same two 500-ton chillers are used, and flow of water is re-piped into a new configuration (figure 2).

In this configuration, the condenser water enters Chiller 1 (CH-1) and then proceeds to Chiller 2 (CH-2) directly after, in the same direction. The reverse is happening on the evaporator side: The flow is going from CH-2 to CH-1 but in the opposite direction of the condenser flow (counterflow). The direction of flow is key for SCF because piping the flow in a common direction will not yield as high an energy savings. In practice, CH-2 commonly is called the high or hot-side chiller due to the leaving condenser water being warmer than that of the leaving condenser water of CH-1. Also, CH-1 commonly is called the low or cold-side chiller due to the leaving chilled water being colder than that of the CH-2 chilled water temperature.

An SCF arrangement offers efficiency savings by decreasing the lift of each chiller within the pair. When evaluating the leaving water temperatures of CH-1, the lift — the amount of work the chiller has to overcome — on CH-1 is no longer 51°F (28.3°C). Instead, CH-1 now has a lift of 46°F (25.6°C). (This is reflected by the difference in leaving condenser water of 90°F [32.2°C] and leaving evaporator water of 44°F [6.6°C]).

By continuing to evaluate the system, CH-2 is also seeing a reduction in lift to 46°F (25.6°C). (This is the difference in leaving condenser water of 95°F [35°C] and leaving evaporator water of 49°F [9.4°C]). Overall, with the reduced lift on each chiller within the SCF pair, the total pair of chillers becomes 6 to 8 percent more efficient, yielding considerable utility savings for the owner over the next few decades.

FIGURE 3. The chillers are piped in a series counterflow configuration, there are no limitations to the chiller layout. The chillers could be positioned next to each other, staggered or in-line with one another, sharing a common tube pull.

Piping arrangement will be the largest modification to the mechanical space design, and this is due to flow passing from one chiller to the other. When it comes to piping chillers in an series counterflow configuration, there is no limitation to the layout of the chillers. The chillers could be positioned next to each other, staggered or in-line with one another, sharing a common tube pull (figure 3).

With similar pressure drops, the pumping energy favors the series counterflow arrangement. The reason the SCF arrangement offers pumping energy savings is due to larger pumps with larger, more efficient motors. This also leads to only needing two pumps for the SCF system rather than four smaller pumps for a parallel system. Although water pressure drops between the systems are similar, the total energy spend will be less in a SCF arrangement due to larger motors.

When there are higher chilled water ∆T values, other pass arrangements can be used. Each design and application should be evaluated individually. But as an example, in a 20°F (11.1°C) temperature split (64°F/44°F [17.7/6.6°C]), a two-pass waterbox would be more advantageous.

Lastly, bypass valves are a recommended addition to isolate a chiller in the event that service is needed for an off chiller. A bypass provides a flow path around the off chiller where the water is only going through the running chiller. 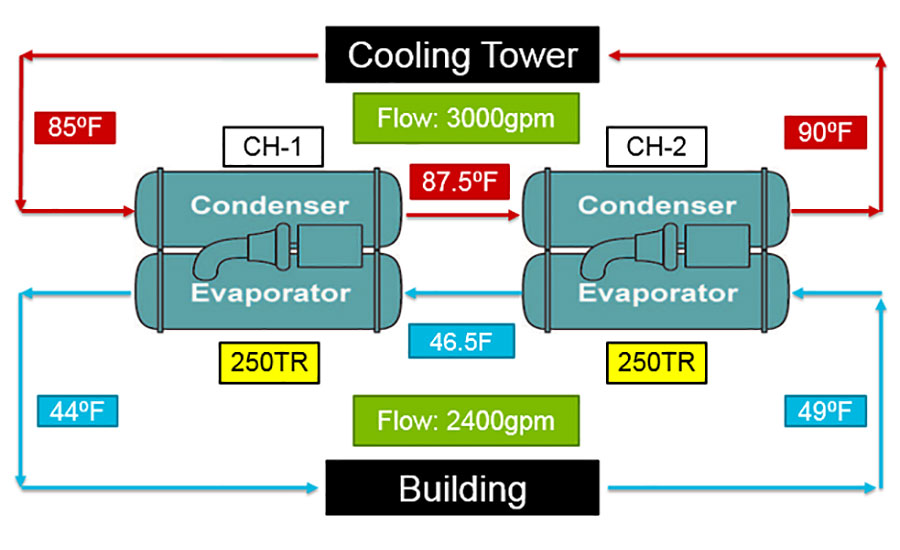 FIGURE 4. The building automation system must understand the controls strategy of the chillers as the load decreases within the plant. This schematic shows the system operating at 50 percent load.

With the implementation of SCF into a plant design, the chiller control sequence must be evaluated on multiple levels. This includes the staging of chillers when the load increases or decreases as well as setpoint control for each chiller.

With a design scenario being ideal for ease of control, this is not reflective of how the system will operate. The system will only see this design condition less than 1 percent of the year, as stated by AHRI. The building automation system (BAS) or controls must understand the controls strategy of the chillers as the load decreases within the plant. Figure 4 shows a system that is operating at 50 percent load (500 tons required by the system on a design wet-bulb day).

FIGURE 5. In contrast to figure 2, which shows a 100 percent load scenario when using VPF with the corresponding flow rate for a 1,000-ton SCF pair, this schematic shows the same series counterflow pair at a 50 percent system load.

Depending on the load and lift seen by the chillers, it may be best for plant optimization to turn off one of the chillers. This can be evaluated with performance reports per the OEM. Figure 2 describes a 100 percent load scenario when using VPF with the corresponding flow rate for a 1,000-ton SCF pair. Figure 5 shows the same SCF pair at a 50 percent system load. Please note that the flow rate is changing while the ∆T across the chillers remains constant (this is due to VPF).

In conclusion, series counterflow is one of the many strategies that can be implemented to lower the total energy bill of the system. With a piping layout change and updated building control sequence, it is possible to save 6 to 8 percent efficiency on the chillers themselves. With the advent of variable-speed drives and magnetic bearing technology, series counterflow can help facilities achieve improving system efficiency with the ability to utilize 40°F (4.44°C) entering condenser water. PC

Spencer Fuller is an HVAC consultant sales engineer with Johnson Controls. The Milwaukee, Wis.-based company can be reached at 281-705-6725 or visit www.johnsoncontrols.com.