HDPE technology boosts production and delivers a quick ROI, freeing one tubing manufacturer to focus on other aspects of his business.

Even in the best of economic times, businesses have to maximize efficiencies and cut waste. These tasks take on even greater importance during an economic slowdown. While not often considered paramount to the overall success of a company, peripheral areas of a business can be those that allow a business to boost production and, hence, grow profits.

Similarly, cooling towers may not be the first place companies look to add efficiency, but they are a critical component for a number of industries that require process cooling. Therefore, dealing with a cooling tower that hinders production — either in adding downtime or slowing production runs — may be a ripe area for companies to tackle and see an almost immediate return on investment.

Plastic extrusion manufacturer Atlantis Plastics Co., based in Houston, had struggled for years with a cooling tower that required repeated maintenance and was ineffective at cooling the water critical to the process. According to company owner Larry Walters, the poorly functioning cooling tower meant that the company could not run at maximum capacity for long periods, especially during the hot Texas summers.

“We extrude LDPE tubing out of the machine. In a matter of about a foot, [the tubing] has to cool enough so that it maintains size and shape,” says Stephan Wagner, operations manager at Atlantis Plastics.

To help set the plastic, the extruded tubing travels immediately through a tank of water that cools the low density polyethylene (LDPE). The water from the tank then circulates back through the cooling tower in a closed loop.

“If we can’t maintain the right temperature of the water in the tanks, then the tubing will come out the wrong shape or size, or [it] will not achieve vacuum in some instances,” Wagner added. “So, the cooling tower is an important component in our production.”

The product exits the extruder at about 350°F (177°C), he notes. The water bath is used to cool the tubing to about 85 to 90°F (29 to 32°C). If the water temperature inside the cooling tanks rises too far above those specified, then Atlantis was forced to slow things down.

“If we can’t maintain that water temperature in the cooling tank, then we are making less product per hour,” says Wagner. “That is really what I mean by lacking efficiency.”

Wagner and owner Larry Walters knew they would have to make changes or risk squelching more profits. “We knew we could no longer ignore the little things, or we wouldn’t be able to concentrate on the bigger areas of the business,” says Wagner. “So, we started looking for ways to make improvements without breaking the bank.” 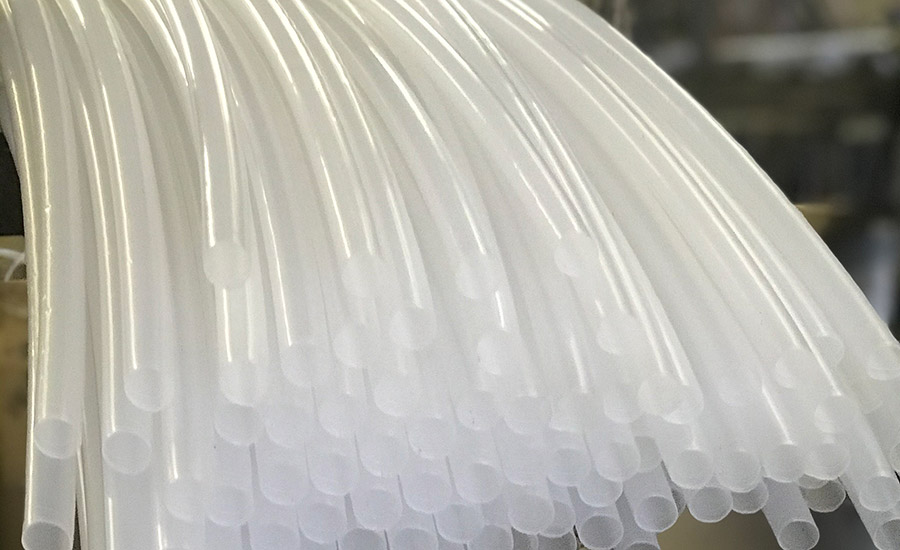 The existing cooling tower Atlantis Plastics used to cool its extruded tubing was not always able to keep the cooling baths at the proper temperature. 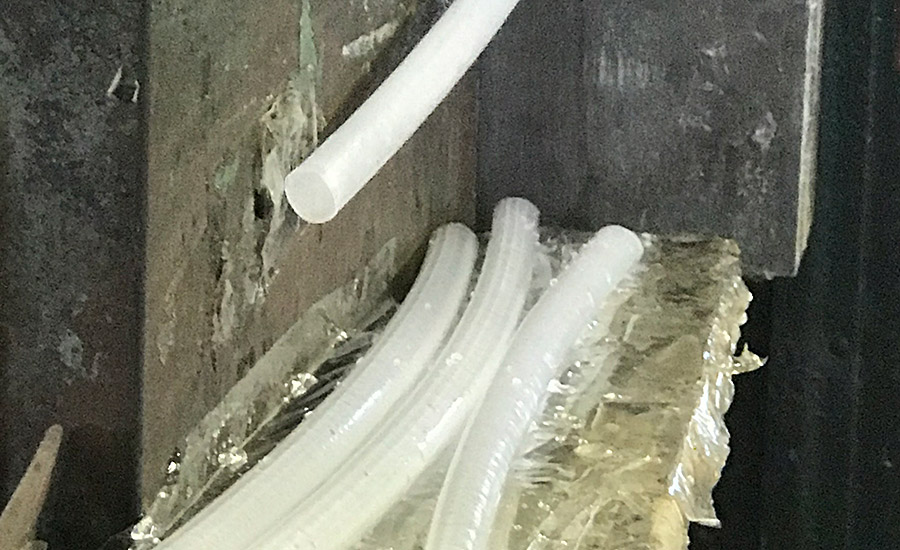 As the LDPE tubing is extruded, it passes through the water bath to cool quickly. When it is about 1' in length, it must cool enough to maintain its size and shape when cut.

While there were other options explored by Wagner and Walters, the one that made the most sense from a practical and economic standpoint was to invest in a new cooling tower. From the beginning, however, Wagner notes, he was hoping to avoid metal or stainless steel units if possible.

“Metal and water just don’t mix,” he says. “We had just dealt with all the problems that go into metal towers, and the steel one we had came with an optional, special powder coating that was supposed to increase life expectancy.” 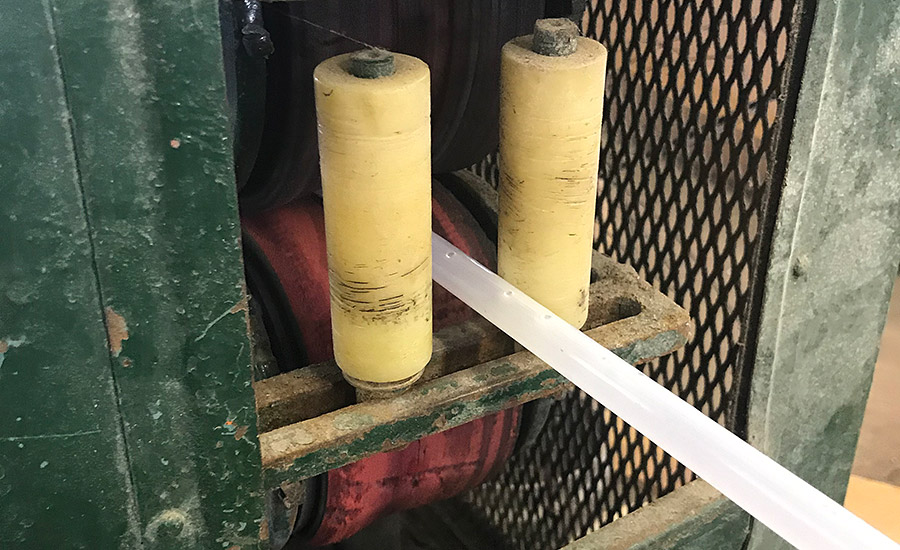 With a long history of manufacturing plastics, Wagner says it was an easy decision to see the potential in a cooling tower that was made out of high density polyethylene (HDPE) engineered plastic.

“I am well aware that HDPE is impervious to corrosion and to the elements, especially here in Houston, where our units are outside,” he says. 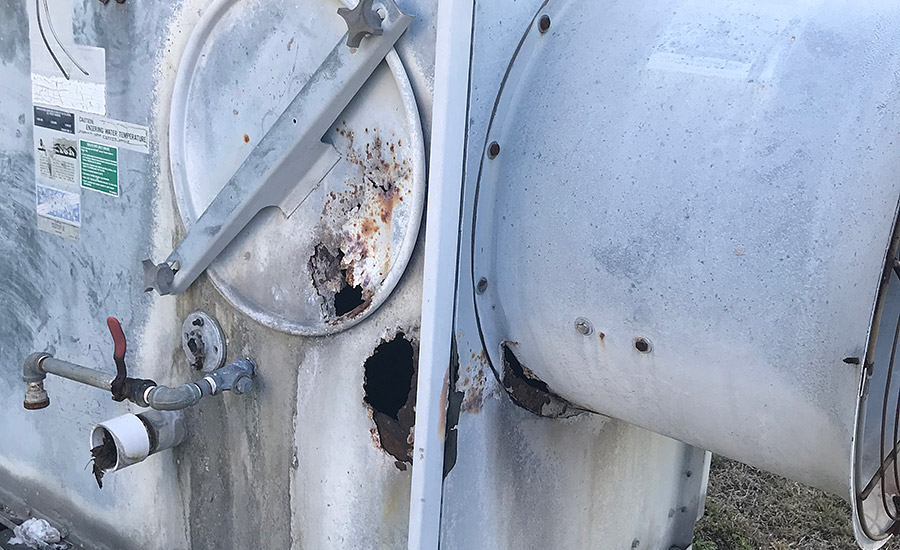 The metal cooling tower that had been used for cooling the extruded tubing was rusting, and the impurities it introduced caused a pump to fail about every six months.

Corrosion-introduced impurities in the cooling water was another concern with using a metal tower. “Another negative factor for us with the metal towers was that with the corrosion, you get impurities and rust in the water,” Wagner added. “Those impurities would go into our pump and start reducing both their service life and efficiency.”

Before the first [new] unit was installed a few years ago, Atlantis Plastics was going through a minimum of two pumps per year. Wagner says the cost for each pump was at least $500.

“With the [new] unit, we have not had this issue,” he says. “I have not had to replace a single pump since I bought the first one.” 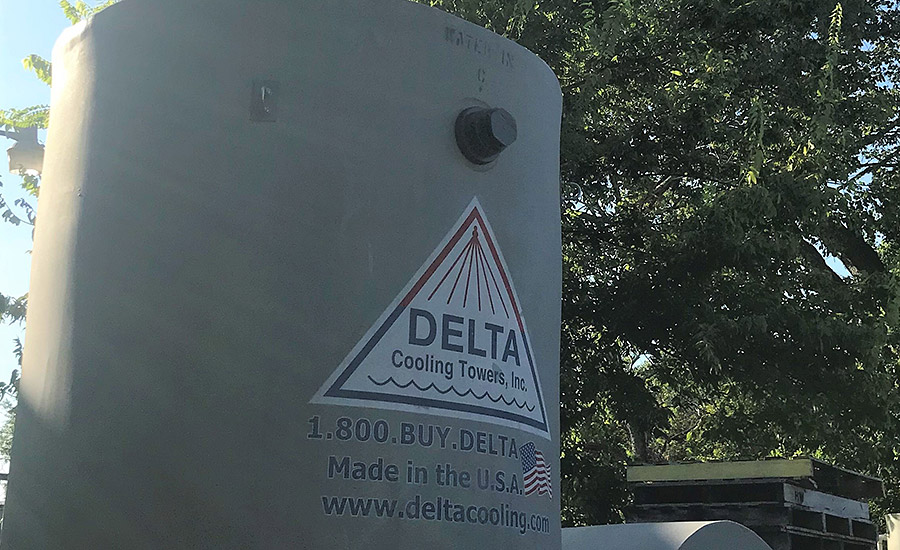 Wagner now has two HDPE towers at his plant and, while he does not oversee the electrical bills, he knows these towers are helping out with that aspect of the business as well. In similar applications, some HDPE tower users are reporting electric power energy savings as high as 40 percent. High efficiency designs along with variable-frequency drive-rated motors on the plastic cooling towers contribute to the savings.

“Like any other business, we are always looking for ways that we can improve, whether that be electricity, efficiency or just about anything else,” concludes Wagner. “We know we will be more productive with less downtime and will have greater returns sooner. And, that just makes good business sense.”

Greg Rankin is a freelance writer.