A case study explores how investing in a condenser-monitoring system with proper flow measurement provided an immediate return for the plant operator.

The flow rate of cooling water to the large steam surface condensers commonly found in power-generating facilities is an important parameter to operators and heat-rate engineers. Yet although a useful value, an accurate flow measurement often is not available. Existing instrumentation may suffer from years of unmaintained service or be abandoned entirely. Without a cooling water flow measurement, however, assumptions and proxy indicators are relied upon. These can lead to uncertainty in calculations and conclusions — and the inefficient direction of resources to identify abnormal conditions.

Conditions that degrade condenser performance have a negative effect on cycle efficiency, causing increases in fuel consumption to meet power demands. Abnormal operating conditions can occur gradually and often go undetected for extended periods of time. Or, they may require extensive time and resources to investigate and resolve. Standard condenser instrumentation often is found to provide poor early detection or guidance for troubleshooting and determination of the root causes for the abnormal operating condition.

The following case study shows how cooling water flow monitoring, supported by other condenser instrumentation, provided guidance for the rapid identification and resolution of abnormal conditions that would have otherwise been difficult to diagnose.

A test-grade condenser-monitoring system (CMS) was installed with the goal of continuously monitoring condenser performance. The system provided the following measurements:

Air In-Leak Monitors. These monitors were located at the air off-take for each bundle and in the common vent line to the vacuum system.

The circulating water flow differential pressure (FDP) meters were calibrated during a planned maintenance outage. A pitot traverse was performed at the cooling tower risers for three flow rate conditions:

The cooling tower blowdown and cooling water supply to the auxiliary plant equipment were isolated during calibration.

The condenser is a two-bundle, once-through, single-shell design with divided waterboxes. It is cooled by a circulating cooling water supply through a mechanical-draft cooling tower. The main supply line feeds the east-side tube bundle through a branch tee that directs flow up into the east inlet waterbox. The west-side tube bundle is fed at the end of the supply line through an elbow that directs flow up into the west inlet waterbox. This tee-and-elbow configuration plays an important role in the findings. Aside from slight variations, both flow paths should carry half of the total cooling water flow. 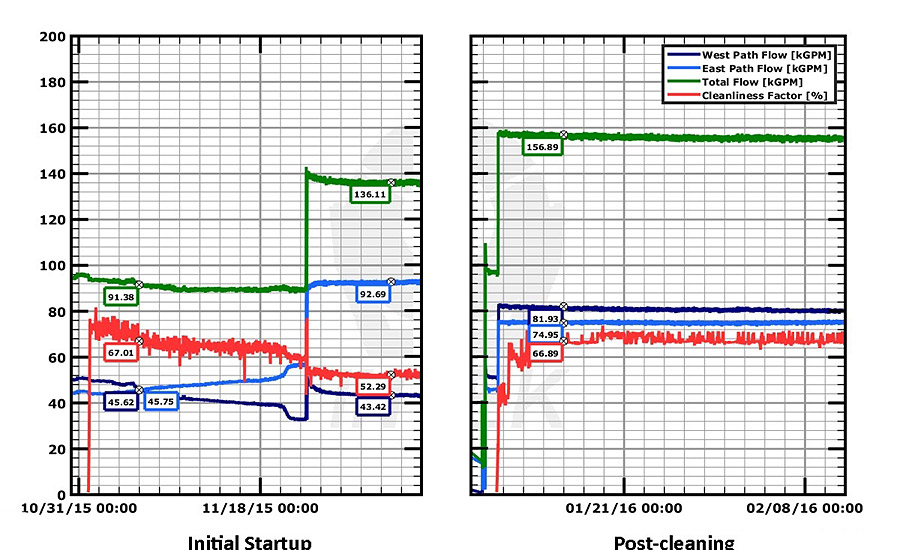 FIGURE 1. Commissioning of the monitoring system was performed to capture startup of the unit following a maintenance outage. The initial startup conditions are shown on the left and the conditions post-cleaning are shown on the right.
(Click on the image to enlarge.)

Commissioning of the monitoring system was performed to capture startup of the unit following the maintenance outage. The initial startup conditions are shown on the left in figure 1.

The second circulating water pump was placed in service on November 22, 2015, increasing total flow to approximately 135 kGPM. This was well below the expected two-pump flow rate of approximately 155 kGPM measured during the field calibration of the flow differential pressure meter.

The unexpected values of the new system were understandably received initially with skepticism. Upon further scrutiny however, it was confirmed that the system was representative of an unknown abnormal operating condition. The decreased flow rate also was reflected by condenser performance: The cleanliness factor (shown in red) had decreased 15 percent over the nearly one-month period.

Divergence between the east path flow and west path flow suggested macrofouling of the west path as the root cause for the reduced flow rate. But, how could one side of the condenser be fouled and not the other?

When the inlet waterboxes were opened for inspection, a significant amount of debris was found lodged in the tubes and lying in the bottom of the west inlet waterbox (figure 2). Additionally, debris had accumulated in the circulating cooling water supply line at the elbow to the west waterbox, downstream of the tee that supplies the east waterbox. Approximately 10 ft3 of debris was removed from the water box, circulating cooling water supply line and circulating water pump suction basin. 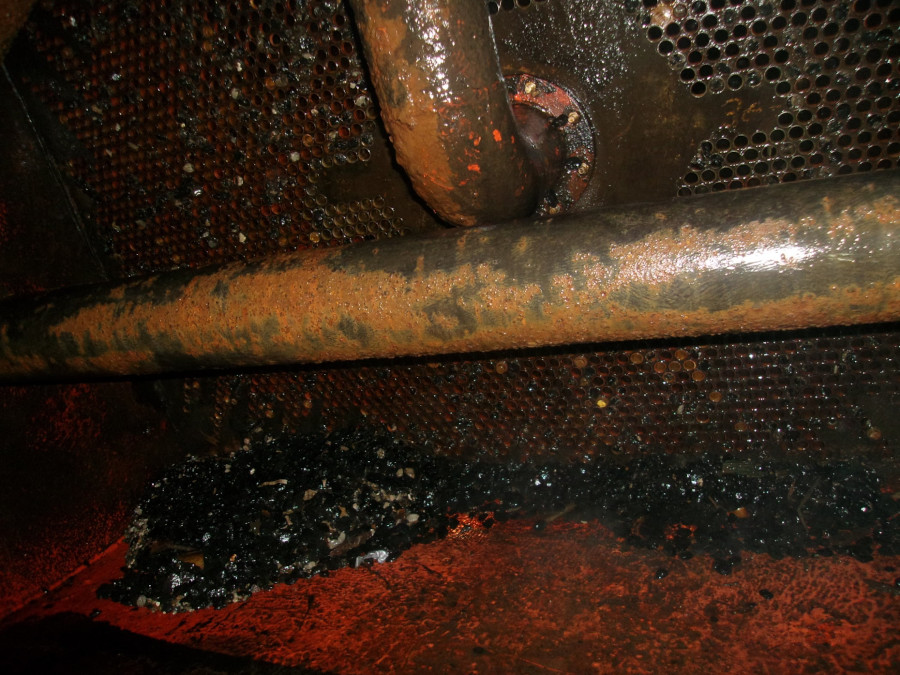 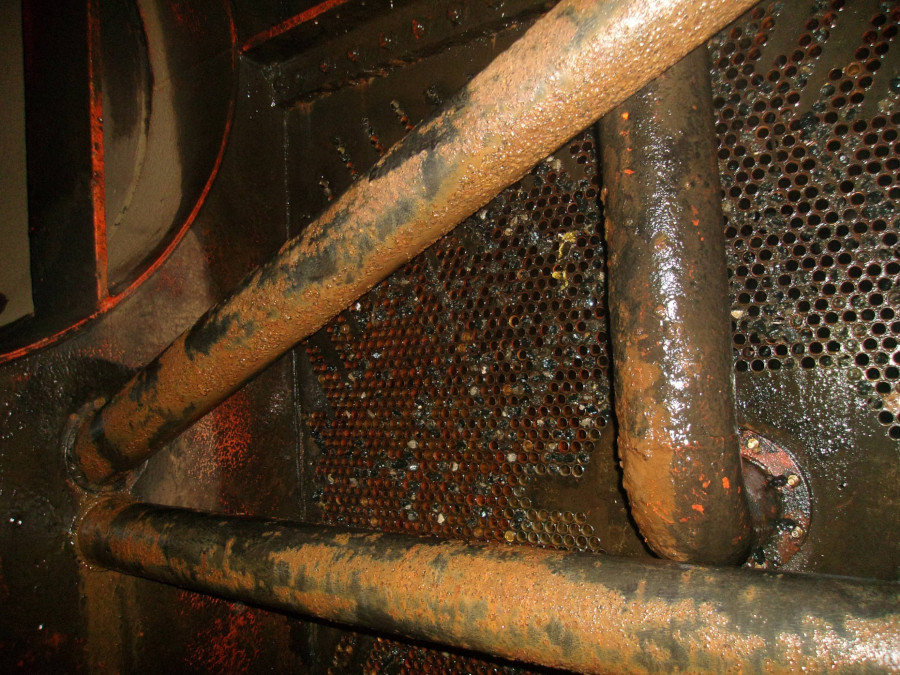 FIGURE 2. Macrofouling of the west path was the root cause for the reduced flow rate. Debris was removed from the water box, circulating cooling water supply line and circulating water pump suction basin.
(Click on the image to enlarge.)

The source of the debris was traced to encroachment of construction aggregate into the circulating water basin from a repair activity taking place in the vicinity of the online circulating water pump basin. This incident occurred about two days into the startup following the end of the outage.

After the debris was removed and the system cleaned, flow measurements were taken again. They are shown in the right half of figure 1 and identified as post-cleaning.

The total flow rate returned to the expected approximately 155 kGPM with a nearly equal balance between the two halves. East flow is slightly lower than west because it was following the original outage just prior to the fouling incident. The condenser cleanliness factor improved immediately to 70 percent even though a full cleaning was not performed. Some debris was known to remain embedded in the west bundle’s tubes.

The reason preferential fouling occurred in the west flow path and not the east was due to the tee-and-elbow configuration of the circulating water supply line. The trajectory of the entrained debris carried it past the branch tee of the east waterbox inlet to the end of the cooling water supply line into the west waterbox. The tee effectively functioned as a particle separator, allowing the debris to pass on to the west side.

The coincidence of this event occurring shortly after commissioning of the newly installed condenser-monitoring system reveals how total flow based on differential pressure from inlet to outlet of the condenser can be misleading. Without the side-to-side individual cooling water flow measurements, this abnormal operating condition could have continued for an extended period, causing higher than necessary turbine backpressure and increased fuel consumption. As shown in figure 3, the individual path flow rates (shown in light and dark blue) indicate an abnormal condition much more clearly than the original plant instrument does (shown in orange). 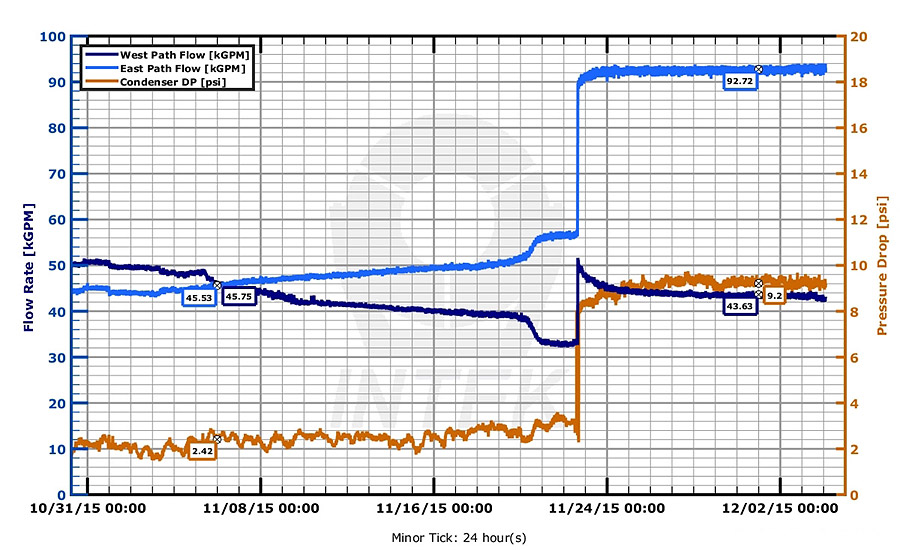 FIGURE 3. The individual path flow rates (shown in light and dark blue) indicate an abnormal condition much more clearly than the original plant instrument does (shown in orange).
(Click on image to enlarge.)

The continuous flow data captured by the instrument system provided visibility of the steady decrease in condenser performance. Gradually occurring abnormal operating conditions are difficult to detect. This incident was not easily detectable on the less sensitive existing instrumentation, which relied on differential pressure loss from the circulating water supply to the return lines. While this measurement has a slight upward trend, it does not attract immediate attention as an abnormal operating condition as did the imbalanced side-to-side comparison.

While it is not possible to estimate the potential cost of this fouling event, it is easy to state that early detection of the problem will help the company’s goal of generating electricity at the lowest possible cost. This specific example demonstrates how an investment in a condenser monitoring system with proper flow measurement can provide an immediate return for plant operators and owners. PC

Colin Eckel is a mechanic engineer and Mitch Morrison is an account sales manager with Intek Inc. The Westerville, Ohio-based company can be reached at 614-895-0301 or visit intekflow.com.

Colin Eckel is a mechanic engineer with Intek Inc. The Westerville, Ohio-based company can be reached at 614-895-0301 or visit intekflow.com.

Mitch Morrison is an account sales manager with Intek Inc. The Westerville, Ohio-based company can be reached at 614-895-0301 or intekflow.com.

The Role of Flow Monitoring in Process Cooling Applications