This website requires certain cookies to work and uses other cookies to help you have the best experience. By visiting this website, certain cookies have already been set, which you may delete and block. By closing this message or continuing to use our site, you agree to the use of cookies. Visit our updated privacy and cookie policy to learn more.
Home » Thermal Flow Meters Help Electric Power Plants Keep Their Cool with Hydrogen Gas
Flow Control/MonitoringPower Plants
Flow Monitoring

In all electric power generation plants — whether gas, solar, coal or nuclear — the fuel source heats a large boiler that creates steam to drive the turbine blades. In turn, the rotating turbine shaft spins magnets inside the generator, which induces an electrical current in a coil of wires (figure 1). It is a high temperature process: first, in terms of the boilers and steam, and second, at the back end of the process, where the electric current generates a large amount of heat that must be managed in order to keep the generator’s wire coils cool enough to avoid degradation or failure. Depending on the MVA size of the generator, hydrogen (H2), air or water typically is used to provide cooling. 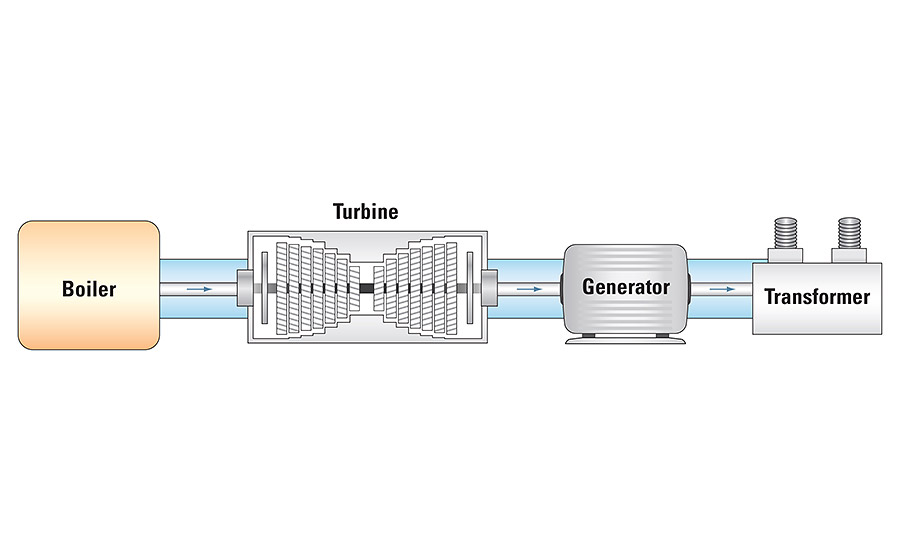 FIGURE 1. Steam created by a boiler drives turbine blades to rotate. In turn, the turbine shaft spins magnets inside the generator, which induces an electrical current in a coil of wires. Source: Fluid Components International

In all electric power generators, the wire coils will quickly overheat and degrade if they are not cooled continuously during operation. Helping these wire coils keep their cool extends their life and reduces maintenance and unplanned or emergency shutdowns.

Hydrogen is the industry’s most efficient coolant, particularly for generators larger than 100 MW. Hydrogen has more than 15 times higher heat/thermal conductivity efficiency than air.

The downside of using H2 as a coolant is the size of its molecule. (For example, it is 10 times smaller than a nitrogen molecule.) Also, hydrogen is combustible. A typical generator has many potential leak paths for such a small molecule, and the small hydrogen molecules are likely to find those paths. In addition, H2 is lighter than air, and the escaping gas could, therefore, rise and accumulate in the roof space of the power plant. This could create the potential for an unsafe fire condition.

The Occupational Safety & Health Administration (OSHA) explains, “Hydrogen gas is lighter than ambient air and can concentrate in overhead areas, making it difficult to detect. Because hydrogen gas has a low minimum ignition energy, it can ignite with any small ignition source — even an electrostatic spark from a worker’s movement, or a tool touching a surface.

“In addition, plant operators must continuously monitor the area where the workers are located because hydrogen gas is colorless, odorless and tasteless, and worker asphyxiation can occur if this gas is not completely purged prior to entering the generator housing or bushing box to perform maintenance.”

Power plant operators have a known industry-acceptable H2 leak rate; below this leak rate, they assume the hydrogen will be so diluted that it will not cause a hazardous environment.

The engineers at one electric power generation plant reached out to one flow monitoring equipment manufacturer to discuss two H2 measurement challenges with its applications team.

Problem 1. Hydrogen is stored outside the power plant’s turbine area in cylinders. It flows into a top-up vessel next to the generator (figure 2). The H2 leakage rate is determined by measuring the pressure of the hydrogen inside the generator.

FIGURE 2. Hydrogen is stored outside the power plant’s turbine area in cylinders. It flows into a top-up vessel next to the generator. Source: Fluid Components International

When the pressure transmitter detects a loss in pressure inside the generator, the control valve opens, and H2 flows into the generator. Plant operators know the volume of the buffer vessel and can calculate the H2 volume leakage. Due to the very low pressure measurements required, the leakage-volume flow calculations were not always accurate or reliable. 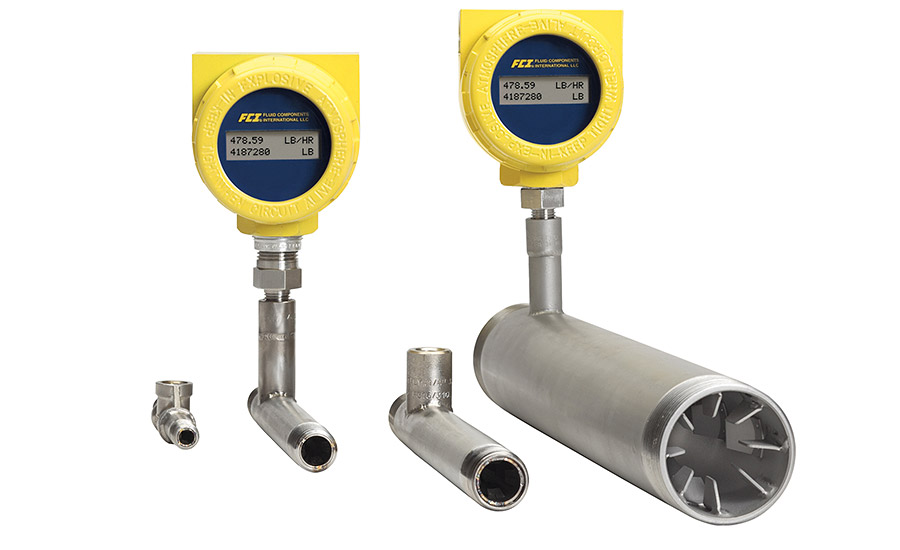 The meter was installed between the top-up vessel and the generator (figure 4). The thermal meter measures direct gas mass flow without requiring separate temperature and pressure transmitters and a flow computer. The meter’s standard accuracy is ±1 percent of reading +0.5 percent of full scale. It has a minimum flow rate as low as 0.01 scfm (0.28 Nl/min) and a turndown ratio of 100:1. 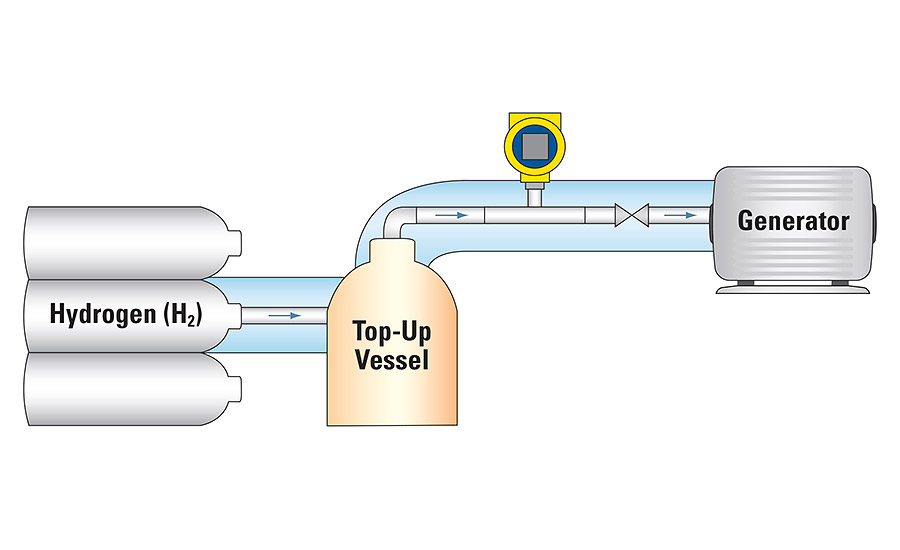 The turndown range allows the plant team to measure the H2 flow to the generator accurately under all power-demand conditions. This includes low flows or leaks to accidental high flow leaks. The meter’s inline configuration and welded sensor design reduce H2 leak paths.

To ensure field accuracy, the meter was calibrated with 100 percent H2 gas and pressurized before installation at the electric power generation plant.

Problem 2. Within the generator there is always a chance that air, which is entrained in the seal/lube oil, could enter the generator and dilute the volume of H2. Plant operators were using an H2 analyzer to monitor the percentage of H2 gas in the generator. If the H2 percentage dropped below 99 percent, the plant team would purge the entire generator using CO2 (figure 5). Then, they would refill the generator with H2. 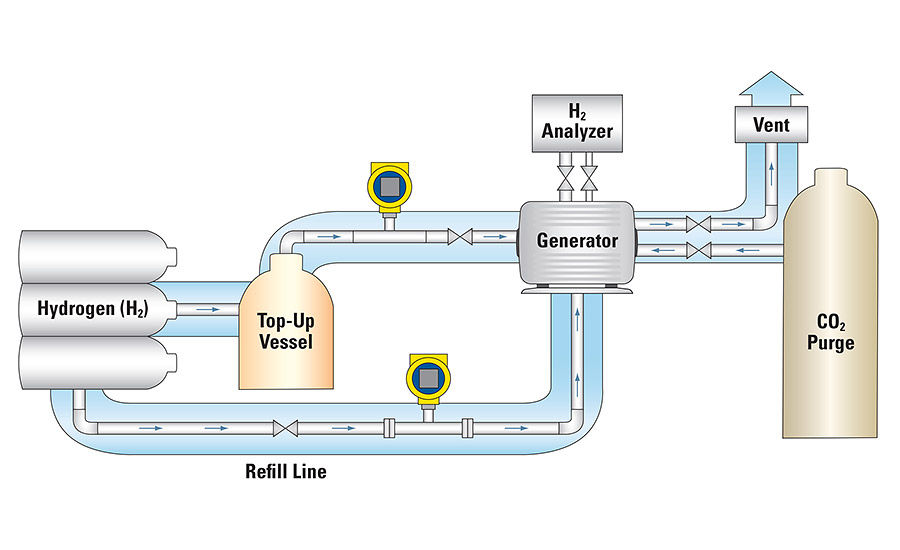 FIGURE 5. Plant operators were using an H2 analyzer to monitor the percentage of H2 gas in the generator. If the H2 percentage dropped below 99 percent, the plant team would purge the entire generator using CO2. Source: Fluid Components International

A flow meter was installed on a second H2 line to measure the H2 refill rate after purging was complete. It also is used to measure the totalized flow volume of H2 passing from the cylinders back into the generator. This allows the team to verify directly that the necessary level of H2 gas is delivered to refill the generator and provide the necessary cooling of the electrical coil.

Both of the installed thermal flow meters connect with industry-standard HART and Modbus RS485 ASCII/RTU communication protocols to interface with programmable logic controllers and distributed control systems. A local digital display permits manual meter readings by technicians. The two-line LCD displays the mass/standard volumetric flow rate on top and either totalized flow or the temperature reading.

One RTD is heated while the other senses the actual process temperature. The temperature difference between these sensors generates a voltage output that is proportional to the media cooling effect. The reading can be used to measure the gas mass flow rate without additional pressure or temperature transmitters (figure 6). 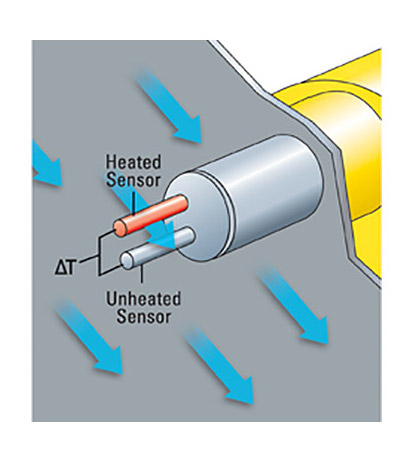 FIGURE 6. The temperature difference between these sensors generates a voltage output that is proportional to the media cooling effect. That value can be used to measure the gas mass flow rate without pressure or temperature transmitters. Source: Fluid Components International

The thermal flow meters have been installed and operating successfully for months at the electric power plant. The plant team reports that the H2 flow data are now more consistent, and that effective cooling of the generators is occurring satisfactorily. PC