Nondestructive testing aids in finding and fixing leaks in ammonia systems before they become a problem.

Anhydrous ammonia is the most widely used toxic chemical in the United States. In fact, ammonia is expended at a rate 10 times greater than any other regulated chemical. While the majority of ammonia produced is used for agricultural purposes, it is the lifeblood of most industrial refrigeration systems in the food-and-beverage industry.

In a properly designed, operated and maintained closed-circuit refrigeration system, ammonia is a safe refrigerant. This chemical is a threat to public safety, however, when system containment fails, and the refrigerant is released.

Process systems and, therefore, the companies that use ammonia in cooling systems, are heavily regulated. The Occupational Safety and Health Administration and the U.S. Environmental Protection Agency hold these companies accountable for mitigating the serious associated risks.

When ammonia is released in closed environments, the chemical can be detrimental to the health and safety of anyone in the vicinity of the leak. Direct ammonia exposure can cause severe burns, temporary blindness, eye damage and irritation of the skin, mouth, throat, respiratory tract and mucous membranes. Prolonged exposure at high concentrations can cause lung damage and even death. Further, ammonia contaminated with lubricating oil — present in closed-circuit refrigeration systems — is a catalyst for explosion.

In addition to the threat to staff and the surrounding public, a release can result in the contamination of the company product, operational disruptions and property damage. 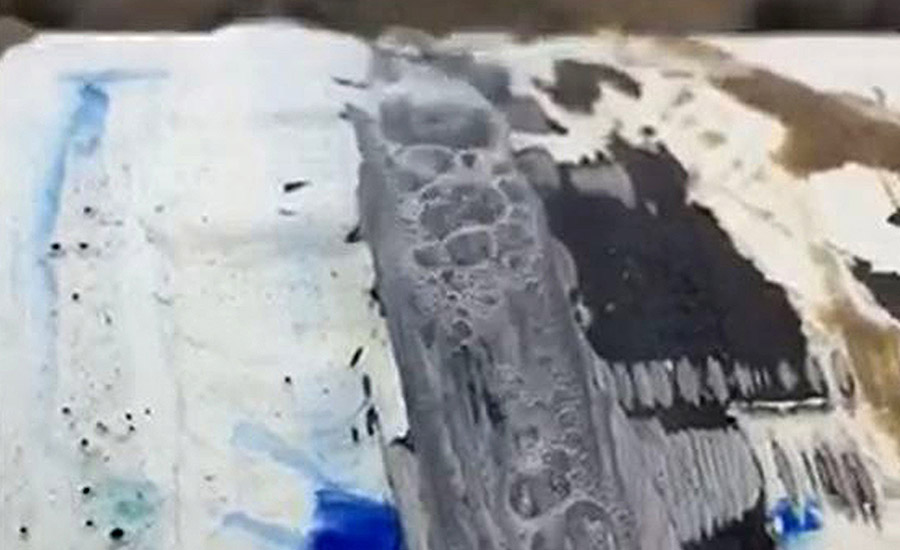 While all valves, vessels and piping in a refrigeration system are subject to degradation that can cause ammonia leaks, long runs of pipe are one of the most vulnerable areas. Image provided by Gamma Graphics Services 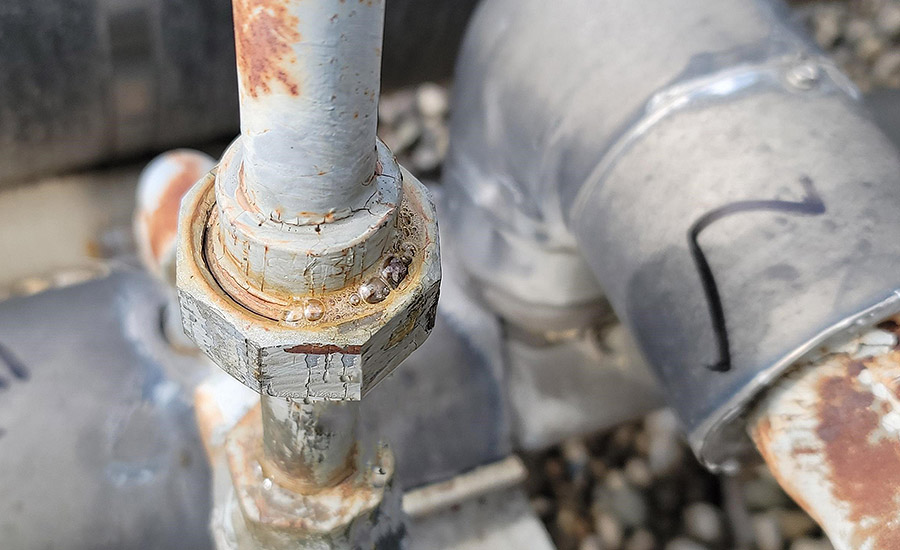 When ammonia is released in closed environments, the chemical can be detrimental to the health and safety of anyone in the vicinity of the leak. Image provided by Gamma Graphics Services

Ammonia leaks can occur for several reasons. According to the EPA, the most common causes include:

OSHA oversees the implementation of process safety management (PSM) programs at companies that use ammonia in their facility. PSM programs include documented instructions so staff knows how to respond when an ammonia leak is detected. Leaks can be inconspicuous or obvious, and methods for detection must be reliable and accurate.

In refrigeration systems, liquid ammonia is stored in closed containers under pressure. When the system releases ammonia as a liquid — at a valve-packing leak, for example — it is visible to the naked eye.

When the pressure is released, however, the liquid evaporates, and the escaping ammonia forms an invisible vapor or gas.  The vapor, which is ammonia gas in the presence of moisture, is heavier than air and will spread along the ground or into low-lying areas with poor ventilation. Inhalation of ammonia in this sly vapor form is extremely dangerous.

While a person cannot see this vapor, ammonia does have a very distinct odor. Most people will recognize or become alarmed by the scent of ammonia in the air. As a natural consequence of prolonged exposure to any odor or compound, however, olfactory fatigue occurs.  Consequently, those responsible for managing ammonia refrigeration systems can become “nose blind” to the smell over time. Effectively, they become desensitized to ammonia’s strong odor and may not be able to smell a leak.

Adding to the complexity of detection, larger systems can constitute thousands of square feet and incorporate thousands of feet of pipe. Fortunately, the industry has developed tools and systems to detect, alert and confirm ammonia releases.

Gas detection tubes are vials filled with a chemical reagent. A hand pump attached to the tube draws air into the tube. The chemical in the tube changes color if the air drawn into the tube contains ammonia gas. 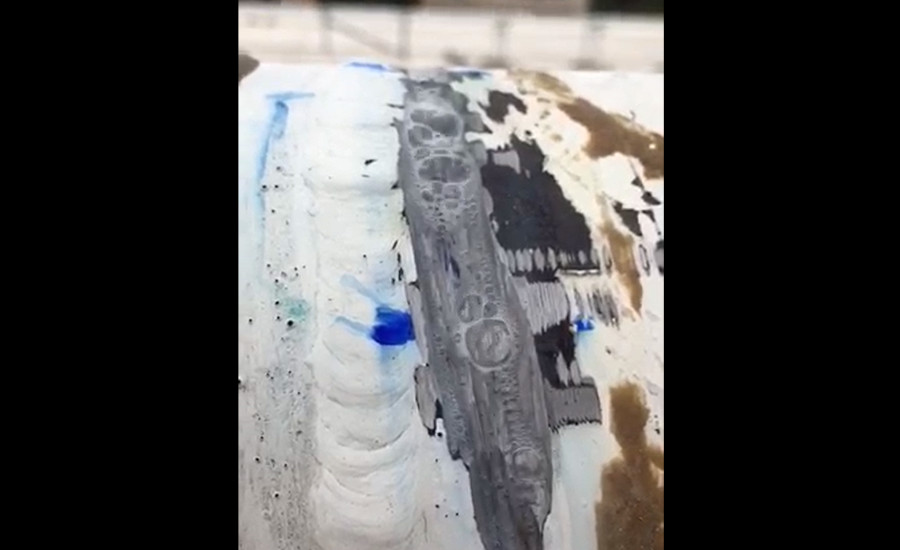 All valves, vessels and piping in a refrigeration system are subject to degradation that can cause ammonia leaks. Image provided by Gamma Graphics Services

All valves, vessels and piping in a refrigeration system are subject to degradation that can cause ammonia leaks.Image provided by Gamma Graphics Services

Ammonia detection cloths are used in a more specialized method to find the site of a leak. The cloth, which also changes color when in contact with ammonia, is a good aid if you are having trouble finding the source of a release.

While these techniques — and others such as infrared cameras, UV flashlights, dye and detection paint — are helpful when a person suspects there is a leak, a release can persist undetected. For this reason, sensors and alarm systems are required to be installed at facilities to alert staff in case of a release at a certain concentration level. When the sensor detects ammonia at a set parts/million level (ppm), the detector triggers a report to a monitored location.

The most effective way to ensure mitigated release is by taking preventive measures. Leaks can be prevented by following recommended safety procedures, which include:

System maintenance requires verified knowledge of the health of the system and its components. And, much like ammonia vapor, the unique characteristics of a refrigeration system make it challenging to find all of the weak or poorly functioning components with the naked eye, though they must be detected to ensure containment and safety. 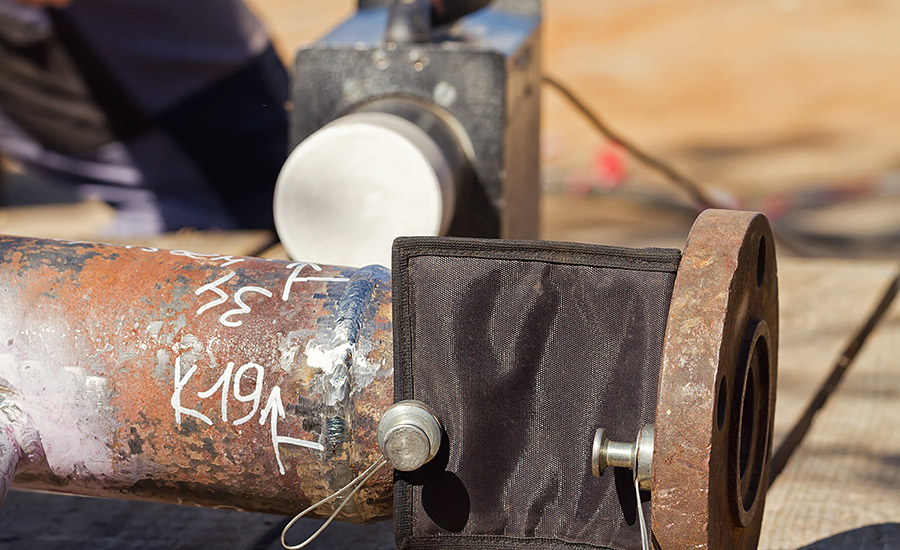 Much like a familiar medical X-ray, conventional industrial radiography testing uses radiation to capture an image, or an X-ray, of the pipe. Image provided by Gamma Graphics Services

Instructions for inspection, testing and maintenance are straightforward for equipment such as compressors, condensers, evaporators and alarms. This is, in part, due to the manufacturer manuals that accompany these parts. In contrast, components such as piping, vessels and valves are mercurial. They are not accompanied with manuals upon install and, as a function of the refrigeration process, they are often insulated, which conceals evidence of damage and degradation. 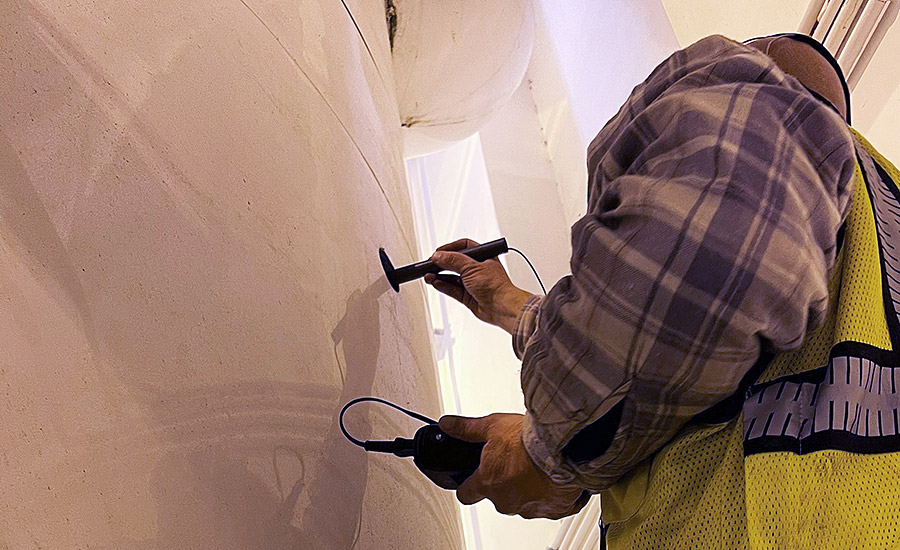 Ultrasonic thickness testing measures the wall thickness of a properly prepared sample (pipe) by touching a transducer to the surface of the pipe. Image provided by Gamma Graphics Services

The single most important damage mechanism that has potential to lead to an ammonia leak is corrosion under insulation (CUI). CUI, which is concealed, occurs when moisture becomes trapped in the insulation against the metal and forms corrosion on the surface. This corrosion decomposes the pipe, vessel or valve metal and threatens the integrity of the component.

Damaged insulation jacketing, biological growth on the jacketing or insulation, and excessive ice buildup are all visual indications that moisture is or is likely to be trapped in the insulation. Not all trapped moisture is revealed visually, however. On average, 30 percent of a system is compromised by moisture trapped in insulation — and the majority is not evident visually.

While all valves, vessels and piping in a refrigeration system are subject to degradation, areas most vulnerable to CUI include:

It is not practical to remove and replace the insulation at all of these areas periodically to inspect a component’s integrity. This would not be cost or time efficient — or safe for the refrigeration process. When insulation is removed, the vapor barrier also is removed, and the component is subject to further moisture exposure. 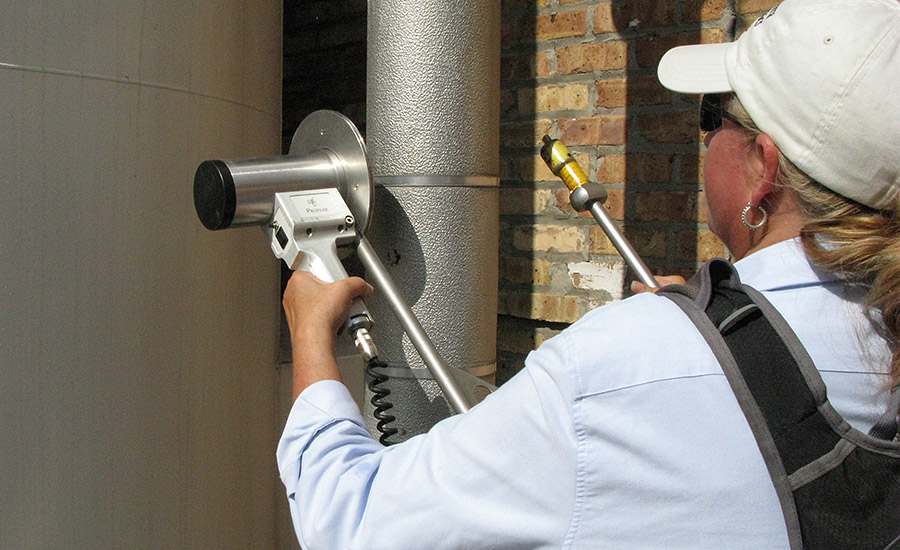 Radiometric profiling measures pipe and small-diameter vessels with gamma-ray energy. An arm scans the sample by positioning the beam source on one side of the sample and the detector on the other, measuring everything in between the source and detector as it passes through the material. Image provided by Gamma Graphics Services

Nondestructive testing (NDT) can be used effectively for degradation detection and confirmation of fitness for these components in the system. NDT is the use of technology to examine an object or material’s structure, imperfections, composition or properties without destroying or compromising the object or material’s future use. NDT provides information about the state of material that one cannot capture visually or would require a great deal of manual effort.

Testing evaluates the piping, vessel or valve and provides valuable data to system managers and engineers so they can make informed maintenance decisions.

The most common NDT techniques applied in ammonia refrigeration are:

Industrial Radiography (RT). Much like a familiar medical X-ray, conventional industrial radiography testing uses radiation to capture an image, or an X-ray, of the pipe. An X-ray film or a digital plate is placed near the pipe to be inspected, and an X-ray energy source is placed some meters away. The film or digital plate then is exposed to the radiation, resulting in an X-ray image of part of the pipe.

Ultrasonic Thickness Testing (UTT). This method measures the wall thickness of a properly prepared sample (pipe) by touching a transducer to the surface of the pipe. Ultrasonic thickness testing is good at measuring the thickness of a single-layer sample — optimally, a clean, flat sample at moderate temperature.

Radiometric Profiling. This method measures pipe and small-diameter vessels with gamma-ray energy. To perform radiometric profiling, an arm scans the sample by positioning the beam source on one side of the sample, with the detector on the other side, measuring everything in between the source and detector as it passes through the material.

Even the most common technologies adopted for testing ammonia refrigeration systems come with their own set of pros and cons that impact safety, cost, efficiency, thoroughness and resulting data. When sourcing nondestructive testing methods for refrigeration systems, one should consider the following:

In addition to vetting a nondestructive testing technology’s capabilities, it is equally important to consider the data that it is capable of capturing. At a minimum, post-testing, a decision-maker should have complete knowledge of the system. In other words, the test results should make it possible to identify whether the proper pipe schedule was installed, if and where moisture is trapped in insulation, if and where corrosion is present and if and where metal pipe, valve and vessel walls are thinning or have thinned to less than nominal.

This information should be distilled to prioritize where and what maintenance needs to occur to ensure the system remains operational. This process — evaluate (inspect and test) the system, analyze the results, act on the findings — should occur every five years (according to PSM and RMP requirements). When implemented, this strategy is extremely effective at mitigating the release risk associated with mechanical integrity weakness. PC

Jim Kovarik is the vice president of nondestructive technology for Gamma Graphics Services. The Chicago-based company can be reach at 847-844-8765 or visit inspectpipe.com.

Jim Kovarik is the vice president of nondestructive technology for Gamma Graphics Services. The Chicago-based company can be reach at 847-844-8765 or visit inspectpipe.com.