While preparing for $35 million plant expansion between 2017 and 2018, the engineering team at Wako Chemicals U.S.A., a wholly owned subsidiary of FujiFilm, realized they needed to increase cooling capacity and provide a level of redundancy. At its facility in Richmond, Va., the producer of antibodies, enzymes, molecular biology, and bio and organic chemicals opted to replace and upgrade the facility’s primary R-22 process cooling chiller system. One goal of the plant expansion was to increase process cooling capacity enough to provide a level of redundancy should the source require service.

Before the expansion, chemical production processes within the plant required a nominal 67.5 tons of cooling from a 5°F (-15°C), 50 percent ethylene glycol solution, with occasional higher peak loading. “We needed to increase cooling capacity and provide a level of redundancy,” said Daniel Frye, plant purchasing supervisor/business operations. “In addition to that, we needed extremely stable cooling capacity.”

Cooling capacity for the main process loop had been provided by an R-22 chiller system. During the project’s initial design process, the specifications called for an in-kind replacement — using larger R-404A HFC chillers because R-22 has been phased out due to its high global warming potential (GWP).

“I received a request for a quote from Wako’s consulting engineer, Richard Owen, a senior processing engineer at Advanced Process Systems,” said Chris Newman, partner at Midatlantic Refrigeration. For 25 years, the representative firm has focused chiefly on industrial refrigeration.

“Owen originally sought replacement Freon equipment, but we saw an opportunity to specify a natural refrigerant,” Newman continued. “Given the need for 5°F (-15°C) process fluid temperatures, we considered the possibility of installing an ammonia-based system, even though this project was considering commercial Freon equipment, not industrial. Owen was instrumental in performing the original evaluation for the ammonia system versus a R-404A synthetic refrigerant system. Once the evaluation was complete, the advantages of the low charge ammonia chiller became evident.” 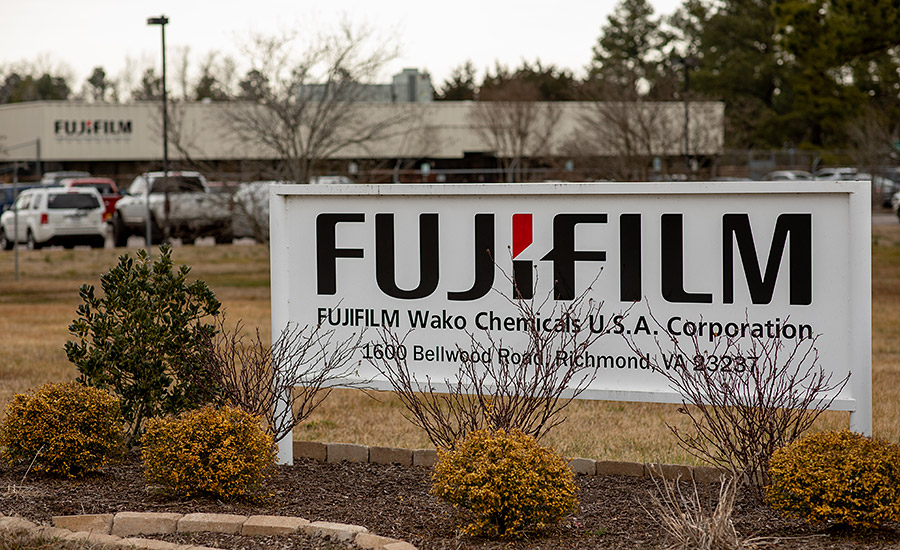 Wako Chemicals U.S.A. is a wholly owned subsidiary of FujiFilm. The facility, located in Richmond, Va., specializes in production of antibodies, enzymes, molecular biology, and bio and organic chemicals. | Image provided by Evapco

Midatlantic Refrigeration represents a number of different manufacturers that supply components for stick-built, field-erected ammonia systems and complete, low charge packaged ammonia chiller systems. Newman specifies one or the other based on the application, but for Wako’s needs, he gravitated toward an low charge packaged system made by Evapco.

The company’s chiller product line includes more than 200 models of self-contained ammonia chillers with available capacities between 20 and 400 TR, with the ability to provide fluid temperatures between 5 and 50°F (-15 and 10°C). Each unit is piped, wired and insulated for plug-and-play installation, including starters and single-point 460 V electrical connection. Variable-screw compressors provide efficient capacity control and part-load operation. This provides a packaged solution and single-source responsibility in design, performance and operation.

Packaged systems offer benefits over field-erected ammonia systems and Freon chiller packages of similar capacity. These include lower energy consumption, especially in low temperature glycol applications like those at Wako. In addition, packaged systems are available with optional accessories such as the fluid pumps mounted on the package, a waste heat recovery system, outdoor enclosure package and multiple serviceability options.

Contrary to Freon, ammonia has a 0 GWP (global warming potential) and 0 ODP (ozone depletion potential). The natural refrigerant is future-proof when compared to Freon systems that are gradually being phased out across the globe, much like has occurred with R-22.

Energy savings over Freon or HFC chiller systems are achieved in several ways. First, ammonia has a higher isentropic efficiency for the compression process. Second, the low charge ammonia refrigeration unit utilizes screw compressors, which are efficient. Third, variable-frequency drives (VFDs) are standard on the screw compressors, and they provide great efficiency at part-load operation.

“The packaged ammonia system was specified in place of a Freon or HFC system due to a better industrial design and higher energy efficiency,” said Owen.

After discussing the project at length with Owen, Newman sent the original specification to Evapco, expecting that the company’s ammonia chillers might present a solution for the needs at Wako Chemical.

Discussions resulted in a new submittal for two, 67.5-ton ammonia chillers. The revised specification matched the chilled glycol conditions from the original, but it was revised with ammonia as the refrigerant. Owen and Newman presented the design to Frye and Scott Cary, plant manager at Wako.

“When we took the new submittal package to the end user, I expected some hesitation about switching from Freon to ammonia due to lack of familiarity. They explained that there were already several smaller ammonia systems in various places throughout the plant, so they were familiar with its advantages, including the energy efficiency of ammonia at such low operating temperatures. At low temperatures, Freon systems often struggle. Ammonia equipment is meant to remain below freezing, exactly what Wako needed,” Newman said.

Another strength for the packaged chiller system was that the manufacturer provides comprehensive documentation with each unit. This includes operating and maintenance procedures, training materials, a hazard review,  unit submittals and drawings, rigging manuals, detailed information on electrical panels and controls, and site-specific calculations for relief valves and ventilation.

“The solution we provided with the LCR chiller was a prefabricated, pre-engineered, factory-tested product from a single source,” said Newman. “We couldn’t have accomplished that with a Freon system, let alone a field-erected ammonia system. Wako took total acceptance of the new specification, and the units were shipped in April of 2018.”

The low charge ammonia chiller packages were installed in an existing utility building not far from the processing plant. It was the same location where the smaller R-22 chillers had been located. Keeping the self-contained units outside of the plant saves space within the main facility and keeps all service and maintenance procedures separated from processing or refrigerated spaces. It also eliminates ammonia from the main facility.

“The chiller systems were piped to two existing pump skids and hot-well cold-well tanks without requiring much rework,” said Andy Brogan, sales engineer at ColonialWebb, a full-service industrial firm with branches providing construction, building service, industrial refrigeration, manufacturing and building automation services from locations throughout the mid-Atlantic. “One skid was for the process glycol loop side, and one was for the condenser fluid loop, leading to an open-loop cooling tower.” 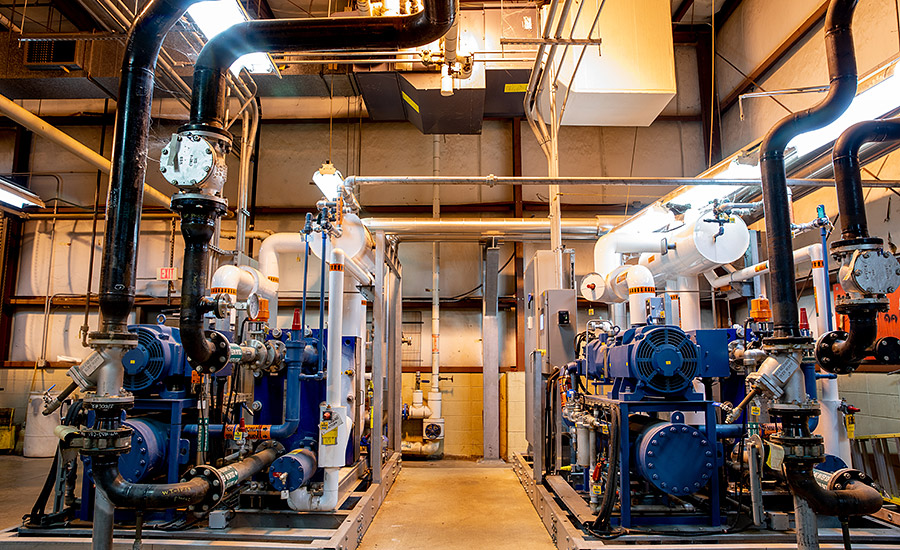 The two 67.5-ton ammonia chiller packages are installed in a mechanical building separate from the facility’s production space. | Image provided by Evapco

The utility building includes an independent relief header and four ammonia detectors that alarm if an ammonia leak larger than 100 ppm is detected.

“I conducted startup and commissioning of the chillers,” said Brogan. “This was the first Evapcold system I’ve worked on. I wish more plants would go this direction for their refrigeration needs. These units are user friendly, easily maintained and, based on the quality of construction, they look like they’ll last a long time. Being a critically charged, packaged system means an abundance of components aren’t scattered throughout the facility. Everything is localized and easier to work on, which mitigates the problems typical to ammonia systems.”

Brogan charged each unit with 80 lb of ammonia, or 160 lb for the whole system. Given the total cooling capacity of 135 tons, he was surprised to find that the system only required 1.18 lbs of ammonia per ton. He was able to complete the charge with a single 400-lb cylinder.

Because Wako Chemical is a full production facility, and there was no backup cooling system for the old R-22 chiller system, the new ammonia system was put into service immediately. This occurred in August of 2018, and the system performed flawlessly.

The two identical units are almost entirely redundant. Brogan explained that one system runs continuously while the second may come on for an hour per day at the height of the summer. He manually switches lead-lag positions monthly to keep the equipment lubricated and to balance runtime hours.

The packaged chiller units specified for the Wako project did not include a heat recovery system, an optional accessory that is sometimes included on ammonia chiller installations. When used, the heat recovery system salvages waste heat from the low charge ammonia refrigeration units and use it in a variety of ways. (Examples include underfloor warming in cold storage spaces, process defrost and snow-melt operations.) It was omitted from the Wako design because there was not a need for heat.

“Wako managers have been more than satisfied with the new system,” said Brogan. “The only change we’ve made was how the system is monitored. Initially, we monitored suction pressure. Now, we’re monitoring the glycol loop temperature instead.” 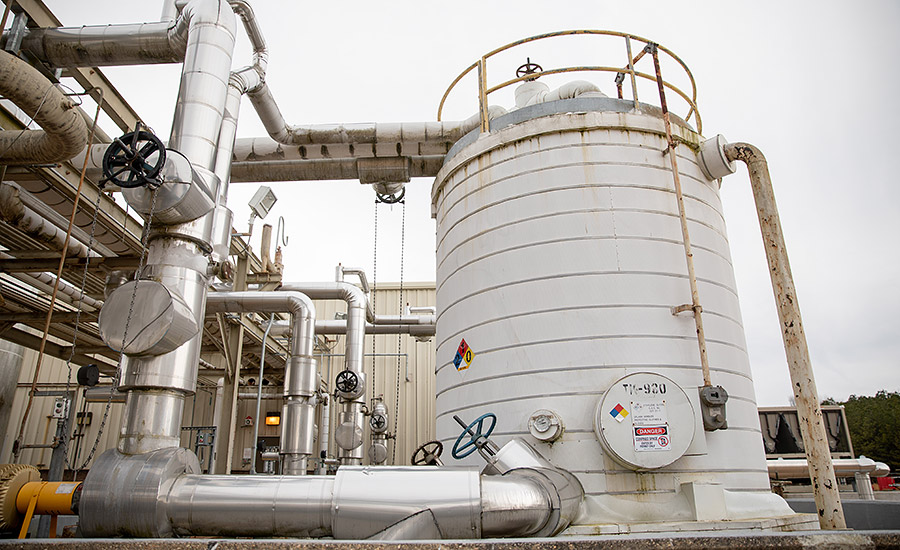 “In addition to better cooling and easier maintenance, we’re no longer dependent on R-22 for the main process loop,” said Frye. An ammonia system like this one has an inherent advantage as well.”

The coefficient of performance (COP) of the new low charge NH3 chillers is 2.49 at full load and the 5°F (-15°C) process temperature. By contrast, the COP of similarly sized R-404A commercial chiller is 2.14. This gives an 18 percent advantage to the low charge ammonia system. The energy advantage improves at partial load as well due to the variable-speed screw compressors. All of of these features can lead to significant operational savings.

After more than two years in service, there has only been one issue: a glycol valve became inoperable and needed to be replaced. Packaged systems like these allow low charge ammonia refrigeration unit to provide lower life-cycle costs due to decreased energy usage, lower refrigerant costs, improved compliance, clearly defined operation and preventive maintenance procedures, and industrial-grade manufacturing and components.

“This was the easiest startup I’ve witnessed in 30 years,” said Newman. “I attribute that to the fact that with a field-erected system, you’re individually sourcing and commissioning all system components. This entire system is pre-engineered, factory-built and factory tested.” PC

Reed Portney is a senior application engineer for Evapcold with Evapco Inc. The Taneytown, Md.-based company can be reached at 410-756-2600 or visit evapco.com.