Ozone can mitigate Legionella risk via a sustainable water treatment and reduce water consumption in the cooling tower.

Adoption of sustainable practices often is stifled by lack of information, data and quantifiable results. These unknowns need to be addressed in order to validate findings and reassure decision-makers about their efforts to embrace alternate solutions. By providing tangible results and sharing data, cooling tower users and operators can be more confident in adopting such sustainable solutions.

According to the Pacific Northwest National Laboratory, the number of cooling towers in the United States is estimated to be 500,000 while in Canada, there are about 50,000. In cooling towers, water makes possible the transfer and disposal of heat.

Bacterial growth — resulting from sunlight combined with foreign debris, dust particles and chemical contamination — is an unintended consequence of the open-loop water-cooling cycle. That growth, if not treated appropriately, leads to even greater levels of bacterial growth and biofilm deposits within the cooling system. Left unchecked, such growth reduces chiller efficiency due to decreased thermal transfer. In addition, untreated biological growth can lead to the spread of Legionella pneumophilia, a potentially harmful bacteria once aerosolized. 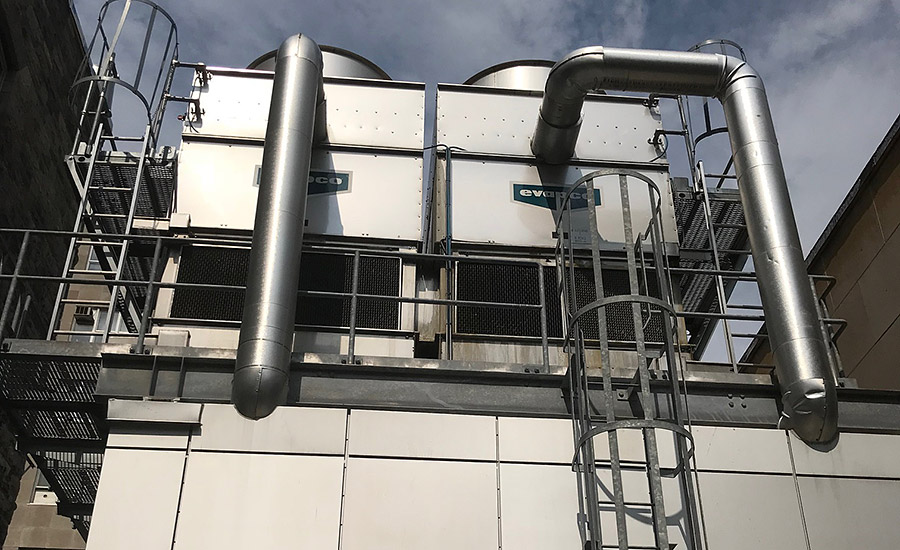 A facility, located within a densely populated metropolitan area houses more than 40 pavilions, many of which are equipped with cooling towers. Despite having a traditional chemical treatment plan, one particular cooling tower had been experiencing frequent Legionella outbreaks. | Image provided by EMO3

According to the Centers for Disease Control and Prevention (CDC), of the 10,000 cases of Legionnaires’ disease (LD) reported in 2018, 10 percent were fatal. Moreover, because the true number of Legionnaires’ disease cases may be underdiagnosed, the reported cases may be an underestimate of the true number of incidences. In addition, studies show the occurrence of outbreaks is trending upward. As of yet, it is unclear if this is because of greater awareness and testing, or due to true growth.

Legionella is a common bacterium present in the environment of water systems, including soil and aquatic systems. At least 50 species and 70 serogroups have been identified, of which the Legionella pneumophilia serogroup 1 represents a serious concern related to legionellosis. Fortunately, these bacteria are not transmittable from person to person, and most people exposed to such bacteria do not become ill.

Bacterial growth such as Legionella can create problems for cooling tower owners. A brief case history can help demonstrate. 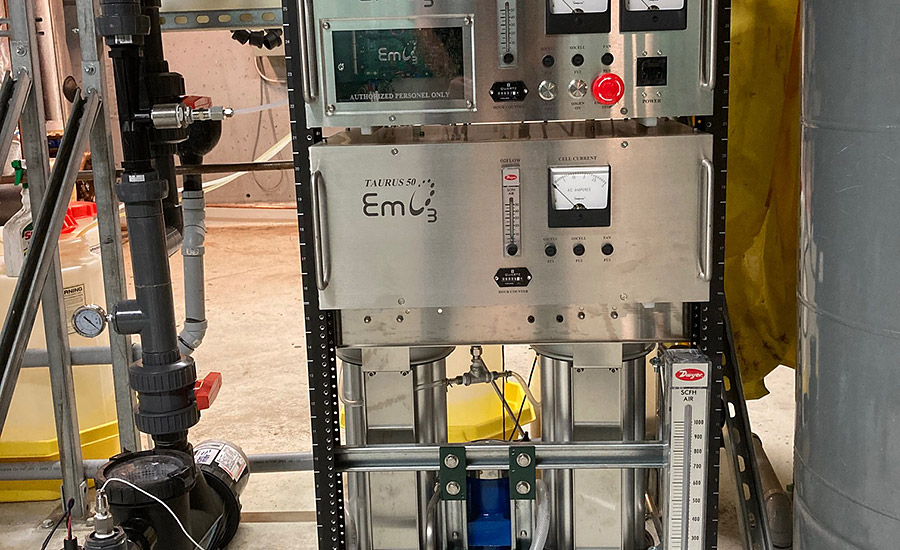 The autonomous two-unit ozone system delivers a total production of 100 g/hr of ozone. The water is treated continuously by a dedicated pump and venturi-injector manifold for mass transfer of ozone to the cooling tower water. | Image provided by EMO3

A facility located within a densely populated metropolitan area houses more than 40 pavilions, many of which are equipped with cooling towers. Despite having a traditional chemical treatment plan, one particular cooling tower was subject to frequent Legionella outbreaks. The installation comprised two cooling towers, each with an 850-ton cooling capacity. Due to the heat recovery setup of the cooling system, the water temperatures were high: an inlet temperature of 104°F (40°C) and an outlet temperature of 92°F (33°C).

The facility often was plagued with Legionella outbreaks greater than 1 million cfu/l, thus requiring an immediate shutdown of the cooling tower system and a system-wide disinfection. Because the risks of potential legionellosis contamination were high, facility officials sought a different approach. The facility contacted a provider of ozone water treatment to perform a feasibility study for its installation. 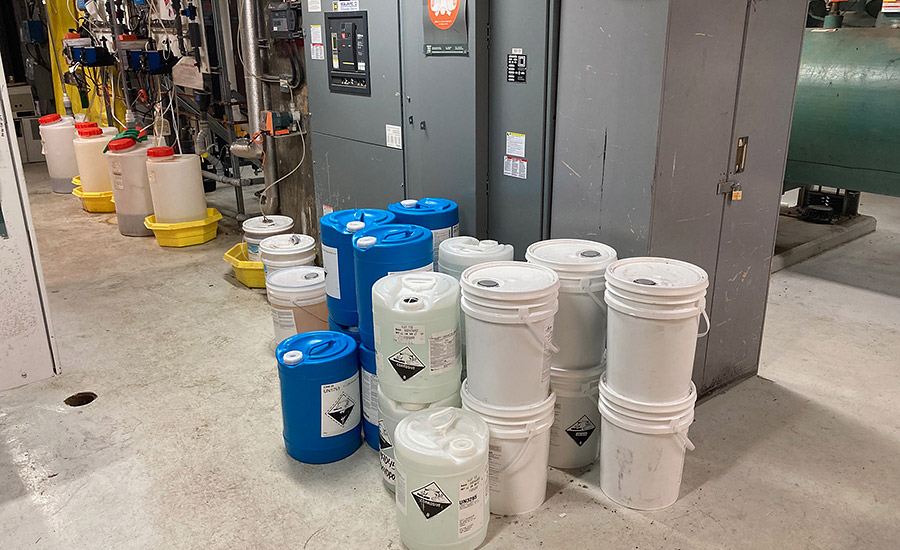 Switching to ozone water treatment allowed the facility to eliminate the recurring costs associated with buying biocides. In addition, material-handling costs were lower because of reduced chemical demand, and scale-inhibitor requirements were reduced by 10 percent. This image shows what had been a month’s supply of chemicals for the cooling tower. | Image provided by EMO3

In the fall of 2020, a two-unit autonomous ozone system, delivering a total production of ~0.22 lb/hr (100 g/hr) of ozone, was installed. The water is treated continuously by a dedicated pump and venturi-injector manifold. The system is designed to provide optimal mass transfer of the ozone to the cooling tower water. An HMI-equipped PLC controls the proper dosage as well as alarms. With a small footprint, the system was installed in a day.

The mechanical department at the facility analyzed adinosine triphosphate (ATP) counts over 30 days, comparing the data to the same period the previous year. ATP enables a correlation of active organisms in the water as measured as Relative Light Units (RLUs). It was the department’s goal to have a score lower than 50 RLU.

According to the facility, the ozone system greatly reduced the bacteria counts and eliminated all forms of Legionella. Ozone in an amount as small as 0.3 mg/l (ppm) and with contact time as brief as 5 min will neutralize 99 percent of Legionella pneumophila.

In addition to ATP verification, the facility conducts monthly mandatory Legionella testing. Since the ozone system was installed at the facility, Legionella counts have fallen below 5,000 cfu/l and have remained low and steady at that level. 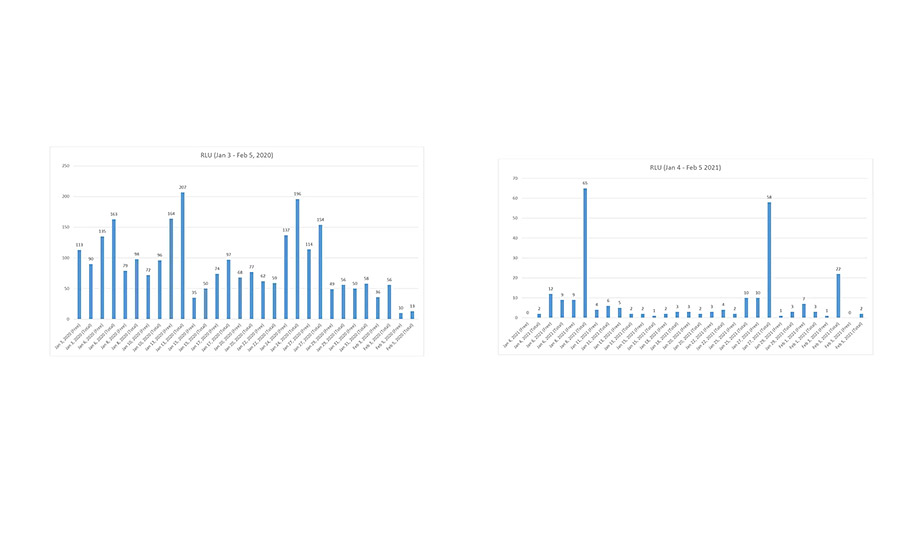 The mechanical department at the facility analyzed adinosine triphosphate (ATP) counts over 30 days, comparing it to the same period the previous year. ATP enables a correlation of active organisms in the water as measured as Relative Light Units (RLUs). | Image provided by EMO3 (Click image to enlarge.)

In addition, the amount of water consumed in the cooling tower’s operation — after ozone use — was cut as much as 14 percent. This occurred even though the climatic conditions and tower usage were roughly the same between the post-use and pre-use periods.

As the data shows, ozone water treatment allowed this facility to mitigate Legionella risk via a sustainable water treatment. In addition, the facility is seeing operational savings as a result of its decision to eliminate chemicals, and water consumption in the cooling tower being lessened considerably. PC