The Benefits of Using Adiabatic Cooling

Using an adiabatic cooler with electronically commutated fans, in conjunction with a smart controller, may allow facilities to reduce city water use and lower energy consumption.

The world continues to evolve, and new challenges emerge, regardless of the industry. Water and energy savings are critical — not just to a business’s yearly operating costs but also to the environment. This article looks the benefits of using adiabatic cooling, electronically commutated (EC) fans and smart control systems. When utilized appropriately and in conjunction with each other, these technologies can provide an optimized, aggregate, applied-cost solution for a user.

By applying this approach — or even just some of these technologies — the end user is assisting in addressing pressing industry issues:

Understanding the adiabatic process is important for being able to take advantage of these technologies effectively.

The adiabatic process reduces the coil temperature by applying the first law of thermodynamics for heat exchange. In an adiabatic cooling system, water saturates a pad installed on the outside of the coil surface, thereby protecting the coil. Air drawn over the wetted pad is precooled before gaining heat from the dry fincoil. The adiabatic system modulates the water released to the pad, thereby reducing the amount of water used compared to on/off-type controls. The adiabatic process provides more efficiency than a standard dry cooler; however, it is not as effective as an evaporative cooling tower. Figure 1 illustrates this process. 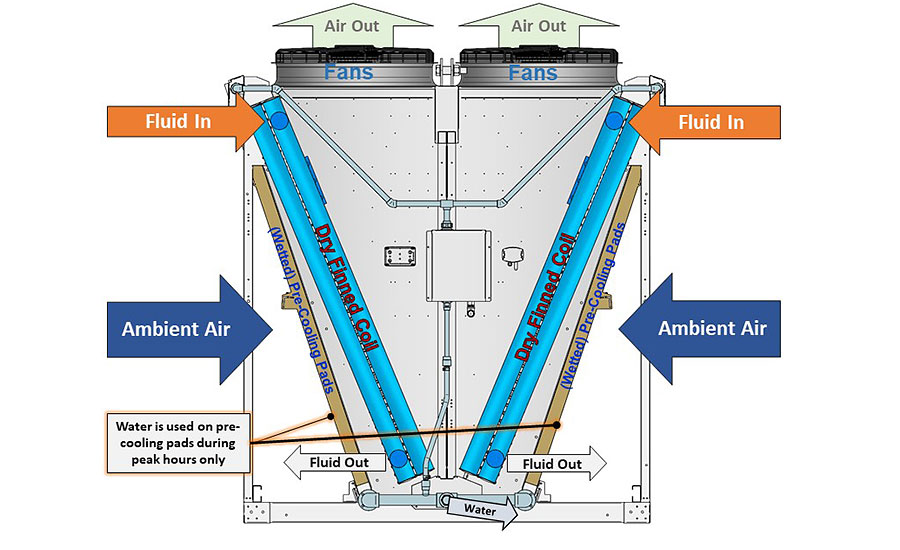 FIGURE 1. The adiabatic process reduces the coil temperature by applying the first law of thermodynamics for heat exchange. In an adiabatic cooling system, the system can operate in dry mode. When more cooling is needed, water saturates a pad installed on the outside of the coil surface to precool the incoming air via evaporation. | Image provided by Guntner US (Click on image to enlarge.)

Once the ambient temperature reaches the designed switch-point, the water will engage and saturate the pad. The higher the switch-point, the longer the cooler will run in dry mode without precooling from the water. With more advanced controls, the adiabatic cooler can engage the water at different fan speeds in order to save energy or water. At the same time, intelligent control systems can minimize water usage overall.

The ability to minimize induction loss, offer high efficiency and generate low noise are the most prominent advantages that spring to mind when it comes to EC fans. In most practical applications, overall energy efficiency is an important factor when it comes to condensers (for refrigeration systems) and dry coolers (for generators and process systems). When selecting a heat exchanger, therefore, choosing EC fans can help realize the energy-saving objectives of such systems.

EC fans, having adopted permanent magnets and other technology features, increase motor efficiency when compared to AC motors. But apart from those advantages, having a modern controller with specific built-in features will help optimize the full energy-saving potential of EC fans. Look for features such as individual fan operation, the ability to inverse fan direction for cleaning, redundant communication and information-collection capabilities.

Case in Point. A brief case study can help illustrate the benefits possible from using EC fans. In 2018, a gas power generation company wanted to retrofit two radiators of its gen set. This retrofit was brought about due to noticeable year-on-year decreases in the heating dissipation capabilities of the old radiators (HT-jacket water, LT-aftercooler water). The old radiators were fitted with AC fans, and even at full load, they no longer could deliver the required capacity. The company decided to replace the inefficient radiators and selected a product containing two efficient radiators using EC fans and a smart controller.

A before/after analysis was performed. The review showed that the new radiators offered improved performance. The main thermodynamic conditions had remained the same (e.g., heat dissipation consumption of the gen set, ambient air temperature, and inlet and outlet water temperatures), but the new radiators were designed with a larger heat exchange surface and lower air volume, which helped to reduce noise emission significantly (table 1).

To have a clearer view of how the new radiators performed, two electric meters were installed on both the new and old radiators. Based on two years of data, the analysis shows that the new radiators provide power consumption savings of 74 percent (table 2). 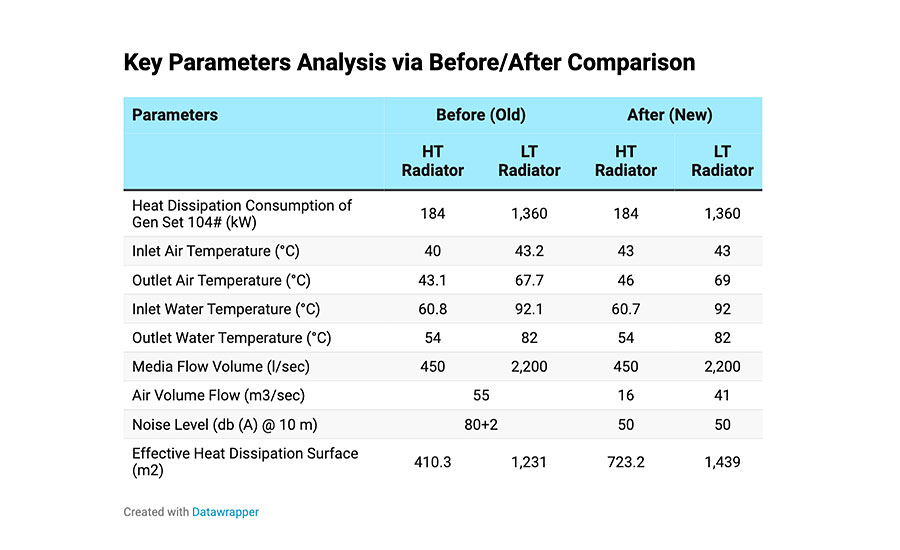 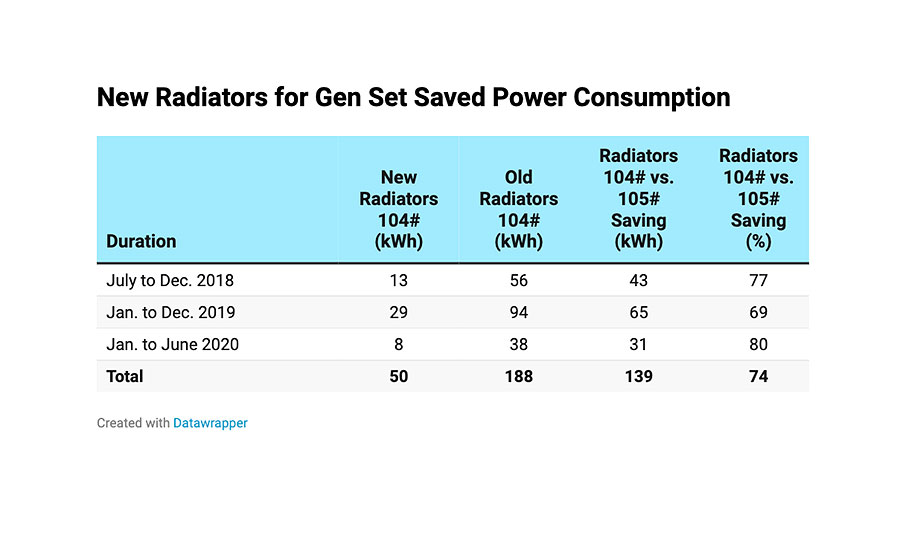 TABLES 1 AND 2. A before/after analysis was performed. To have a clearer view of how the new radiators performed, two electric meters were installed on both the new and old radiators. Based on two years of collected data, the new radiators provide power consumption savings of 74 percent. | Images provided by Guntner US (Click on image to enlarge.)

With adiabatic cooling, the water and motor controllers work together to achieve a process control solution. The water-management controller is equipped with humidity and temperature sensors along with a modulating valve, drain valve and metering device. It reads the fan speed along with the humidity and temperature to determine how much water to distribute to the pad, thereby only using what the ambient air will absorb.

A smart control system is recommended for adiabatic solutions with EC fans because the system serves as a standalone process manager, information manager and system manager. The controller provides autonomous control of the unit as well as the ability to achieve operational efficiency by reducing energy consumption. The controller also can improve system transparency and ensure operational reliability for the heat exchange system.

At low ambient temperatures, the unit capacity can be delivered with reduced airflow by modulating each fan at its lowest speed. To achieve this, the smart controller modulates the fan’s speed according to dynamic load. This allows the system to function as it should while reducing power consumption by lowering the fan speed (air volume).

It is important to utilize all of the benefits of an intelligent controller, including information logging and analysis. This information offers insights into the status of the unit and provides data for system optimization and preventive maintenance.

Several parameters are constantly monitored. These include fan energy consumption, inlet/outlet process temperatures, air temperature, wet-bulb temperature and fan speeds. The information management task of the smart controller also visualizes the data in various ways. Parameter information of the adiabatic system should be available on an LCD display, a mobile app linked via WiFi or a computer terminal connected by industrial Ethernet. 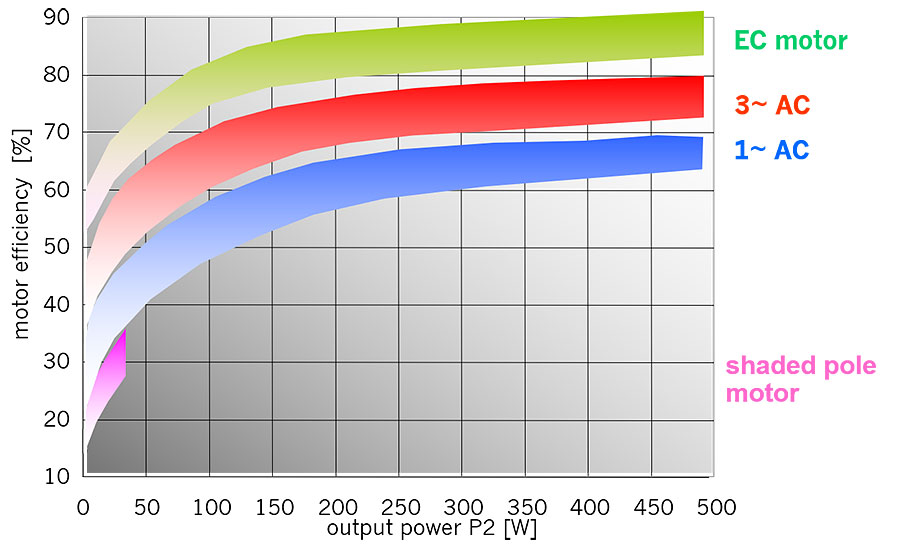 EC fans, having adopted permanent magnet and several other technology features, greatly increase motor efficiency when compared to AC motors. | Image provided by Guntner US (Click on image to enlarge.)

Furthermore, smart controllers can manage the complete lifecycle of the adiabatic system (startup, operation and servicing). All operation-relevant components in the system can be monitored and operational alerts sent out immediately to enable prompt action. Alarm and error messages are stored in the controller, simplifying fault analysis and diagnosis.

For reliability, the control system should automatically activate a fan-bypass function so that the EC fan will run in order to maintain the unit capacity.

In conclusion, using an adiabatic solution with EC fans, in conjunction with a smart controller, may allow facilities to reduce city water and energy consumption. Additional cost savings can be realized via reduced city water demands, reduced electricity costs for filtration pumps and reduced maintenance due to fewer systems for cooling.

DJ Frye is a sales director, climate solutions, with Guntner US. The Rolling Meadows, Ill.-based company can be reached at 847-309-0127 or visit guntnerus.com.