To enable its use as cooling water, industrial facilities such as power, processing and manufacturing plants prefilter raw water from rivers, lakes, gulfs and coastlines to remove organic, aquatic and other solids. The cooling water typically is used in a couple of ways:

Because the cooling water originates from bodies of water, it can be dirty, with considerable debris, weeds and trash. Strainers are required to remove the waste from the cooling water before it goes into heat exchangers and cooling systems and to prevent the spray nozzles from clogging.

Insufficient removal of both large solids and small particulates such as debris, dirt and suspended solids, as well as biofouling such as organic matter from the water, can cause serious problems. Plugging and fouling can lead to unscheduled downtime, excessive maintenance and premature equipment replacement. Traditionally, filters are designed to handle either smaller particulate or larger debris, but not both. The challenge is that natural bodies of water such as rivers and lakes typically are rife with both.

Because power plants often draw cooling water from natural sources, their production can depend on reliable, efficient filtering of debris from the water to prevent excessive maintenance and downtime.

Case In Point. A power plant serving as a backup energy provider for a Kansas City power company used river water for cooling and, therefore, employed large basket strainers. The plant sought more efficient operation and maintenance from a downtown steam loop that produced chilled water when it was tapped to join an energy solution partner with multiple district energy networks.

District energy uses a centrally located facility (or facilities) to generate thermal energy — heat, hot water or chilled water — for a number of nearby buildings. These resources are transported through underground pipes. 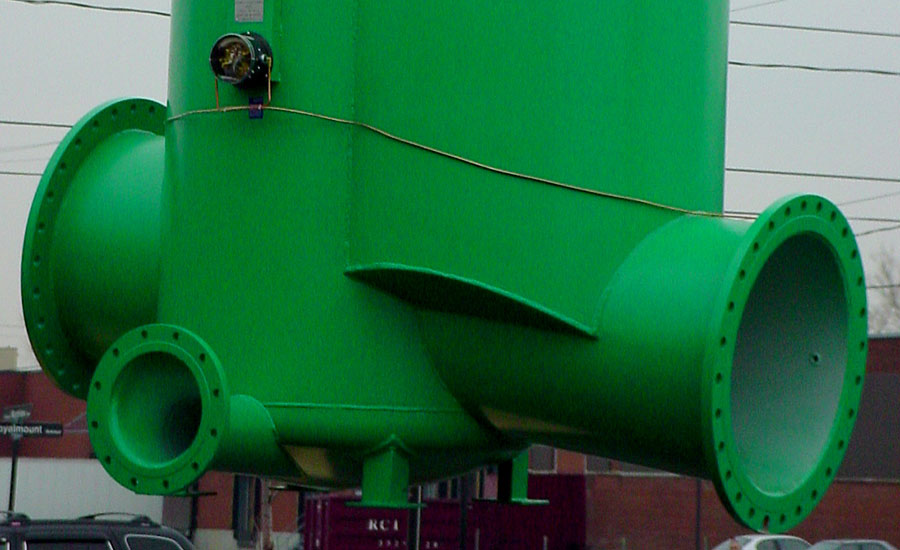 “In order for them to provide condensing water for steam production as well as cooling water to the chillers and condensers, they take water from the Missouri River and put it through a once-through cooling system,” says Keith Williams, P.E., who was involved with the project. Williams works as a manufacturers’ representative at Lenexa, Kan.-based Associated Equipment Sales.

According to Williams, the river’s fast flow along with high tide complicated the straining of river water for the plant.

“The Missouri River is the fastest river in North America. During high tide, it rips everything off its banks: grass, weeds, twigs and debris. All of that must be filtered in order to avoid clogging the condenser tubes in the heat exchangers. We needed fine straining but also had to pass very large debris, so the [basket] strainers had to be cleaned out manually,” says Williams.

The power plant’s previous basket strainers required frequent maintenance, Williams noted. “They had to clean the manual strainers every shift, three times a day during high tide, and it was a very dirty, disgusting job that no one wanted to do,” he says.

While backwash strainers often are used in these circumstances, backwashing can present challenges for removing large solids from the perforated screen elements. The backwash arm must be quite close to the screen to function properly, which can prevent the passing of larger particles. 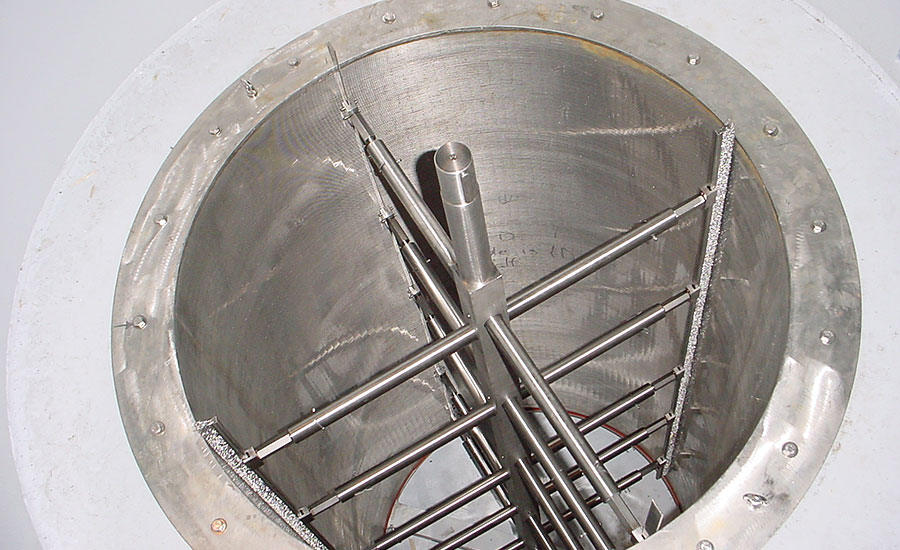 “Most automatic strainers have a sweeping arm that uses differential pressure to suck the debris off the filter,” says Williams. “In order for it to have enough power [to do this], the gap must be tight to the filter, so you cannot pass large particles. The particle size typically is limited to about a half-inch or three-quarters of an inch.”

When solids are bigger than the gap between the screen and the backwash arm, the solids remain in the vessel and must be removed manually. In addition, a biological film can adhere to the screen and create a cake that the backwash arm cannot remove. This also necessitates frequent cleaning by the maintenance crews.

At the Kansas City power plant, a basket strainer was used, but it often clogged during the river’s high tide.

“Maintenance crews would clean one strainer and close it, [then] open the other and clean it, etc. It was a never-ending process during high tide to keep the strainers clean and keep the downtown chilled water loop functional,” he says.

Williams was originally contacted as part of a plan to install new cooling towers. Instead, after a review of the site, he recommended that a more cost-effective solution was to install a different cooling water intake filtration system.

“I advised using an automatic scraper strainer...that is capable of very fine straining while still passing very large debris,” he says. “It can strain to the micron level.”

The automatic scraper strainer selected is a motorized unit designed to continually remove both large and small suspended solids from cooling water. Cleaning is accomplished by a spring-loaded blade-and-brush system that is managed by a fully automatic control system.

The four scraper brushes rotate at eight rotations per minute, resulting in a cleaning rate of 32 times per minute. The scraper brushes get into wedge-wire slots and dislodge resistant particulates and solids. This approach enables the scraper strainers to resist clogging and fouling when they filter large solids and experience high solids concentrations. The approach also ensures a complete cleaning and is effective against biofouling.

Blowdown occurs only at the end of the intermittent scraping cycle when a valve is opened for a few seconds to remove solids from the collector area. Liquid loss is below 1 percent of total flow.

According to Williams, the scraper basket also allows the strainer to bypass large particles and debris. “There are few manufacturers that can pass such large particles while straining out fine particles,” says Williams. 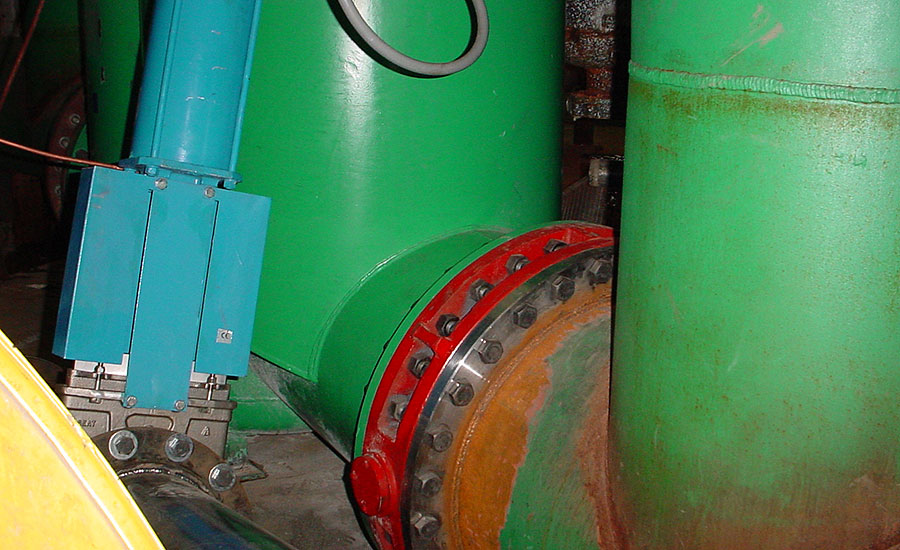 For the Kansas City power plant, the automatic scraper strainer selected, manufactured by Acme Engineering, required customization. The unit was modified to install on a 30" inlet and outlet with a 12" blowdown line for solids removal.

“The line they wanted to install it in was at a 15-degree angle in a tight space with a short line, so we made a strainer where the inlet and outlet angled at 15 degrees,” says Williams. “This enabled them to cut the pipe, install the flanges and the strainer, and be done. It was a custom vessel.

“The automatic scraper strainer simplified the maintenance of the facility’s strainer for cooling, despite the size range of river water debris it has to catch,” he adds. “Now, they only open it for annual inspection and maintenance, and no one has to manually clean it.”

According to Williams, the installation more than a decade ago still is fully functional, with only a basket replacement.

“The plant is basically doubling the amount of cooling water coming in. With the added strainers, the intent is to prepare for future growth with potentially three times their previous capacity,” he concludes.

Del Williams is a technical writer for Acme Engineering Prod. Inc. The Mooers, N.Y.-based company can be reached at 518-236-5659 or visit acmeprod.com.