To get the most from a modern industrial refrigeration system, processors should focus on five steps that can yield major improvements:

Distributed controls can reduce the cost of installation by using communication networks, thereby reducing the number of hardwired device runs to the main PLC system. Also, they can add flexibility and reliability.

New installations also can benefit from having distributed controls because they can reduce long wire runs for each IO point throughout the facility. Fewer runs mean fewer copper wires, which will reduce the cost.

Another way to reduce costs is by installing new technology into older or legacy systems. Reusing existing wire and, where possible, the existing IO can reduce the installation cost. 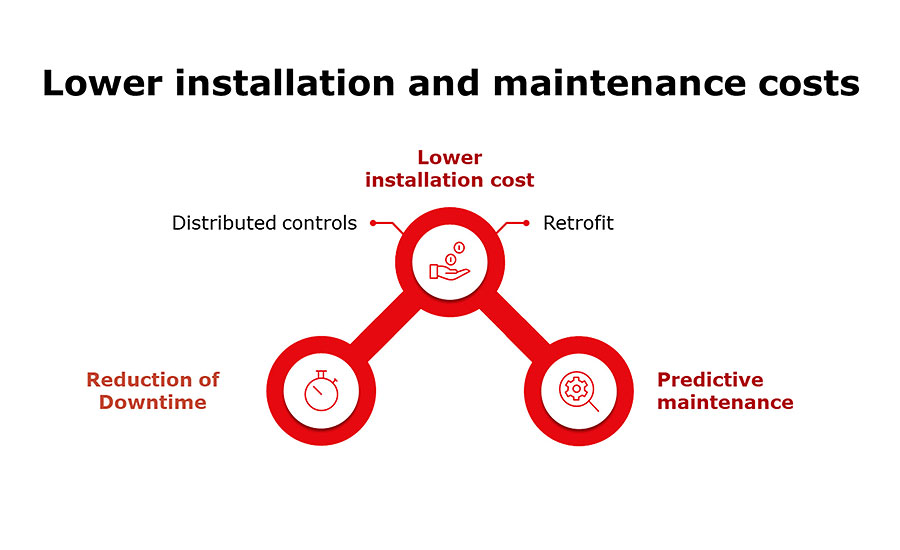 Lowering installation and maintenance costs through controls and predictive maintenance can help optimize an industrial refrigeration system. Image provided by Danfoss (Click on image to enlarge.)

While older controllers may need to be replaced if they are unsafe or in poor condition, by not replacing old controllers, a processor can save on the cost of a new controller, the labor to replace it and the cost of field wiring.

Predictive maintenance means equipment run times are recorded and coordinated with the manufacturers’ recommended maintenance schedule. Along with collecting data from different machines in the facility, facilities can analyze the data points and see small changes in behavior that may indicate issues with the equipment. Addressing these issues decreases machine downtime, and by minimizing machine downtime, production downtime is, in turn, reduced.

Before looking at compressor control, let us first explore how a screw compressor controls its capacity. The screw compressor uses a device — called the slide valve — that uncovers part of the rotor inside and proportionately reduces the capacity of the machine. For example, if the slide valve is at approximately 90 percent capacity, that allows for about 10 percent of the capacity to be recycled back into the suction chamber. 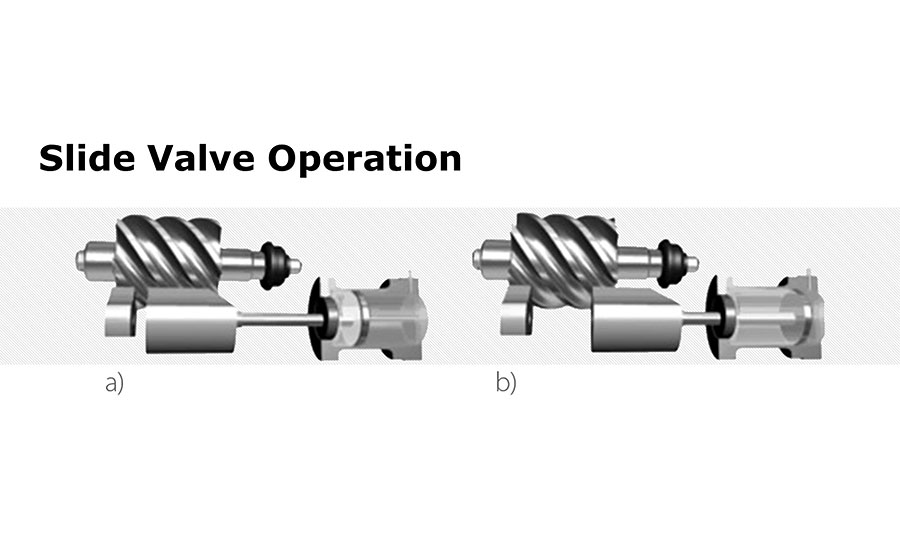 If the slide valve is at approximately 90 percent capacity, that allows for about 10 percent of the capacity to be recycled back into the suction chamber. As the capacity of the machine is reduced, it becomes less efficient because the input power remains constant. Intelligent compressor control or automatic compressor sequencing can improve efficiency. Image provided by Danfoss (Click on image to enlarge.)

As the capacity of the machine is reduced, it becomes less efficient because the input power remains constant. How to fix this? Intelligent compressor control or automatic compressor sequencing can improve efficiency.

Many machine rooms have all of the machines running on their own individual setpoints rather than in a coordinated fashion. If the operation of the machines is coordinated, they can be run in a more efficient manner by only allowing the amount of compressor capacity needed to maintain cooler or freezer production. For example, if the No. 1 machine is ramped up to 100 percent, then the No. 2 machine can trim its capacity and allow for fluctuations in load. Without the coordination of an intelligent control system, money (and energy) are wasted.

Another option is to add a variable-frequency drive (VFD) to one of the machines. A VFD allows the operator to keep the slide valve at 100 percent — its most efficient position — and use the speed of the machine to control the load. Taking another look at the previous example, suppose the No. 1 machine’s speed is held at 100 percent, and both machines’ slide valves are positioned on 100 percent. The VFD can be used to adjust the speed of the No. 2 machine and trim it to account for the system load.

Another tool that can be used is floating suction. In all refrigeration systems, pressure is related directly to temperature. An operator can take advantage of this characteristic by floating the system suction pressure upward to better match the load requirements of the facility. The payback for this is seen in reduced compressor operation.

The second primary means of increasing efficiency is via intelligent condenser control. This comes in two main varieties: automatic condenser staging and floating pressure with wet-bulb control. Condensers can contribute as much as 20 percent of energy consumption in an industrial refrigeration system. They have a direct effect on overall operational efficiency. Controlling the condensing equipment based on wet-bulb temperature or humidity can help reduce this.

For energy savings, it is desirable to run the condenser pressure as low as possible. The return then is seen in increased efficiency at the compressor as the brake horsepower, per ton of refrigeration needed, goes down. Screw compressors tend to run more efficiently at a lower discharge pressure. Lowering discharge pressure, however, also can have an effect on other portions of the facility, so it is important to watch for these effects when lowering the discharge pressure. Areas that should be looked at include liquid injection and evaporator defrost. 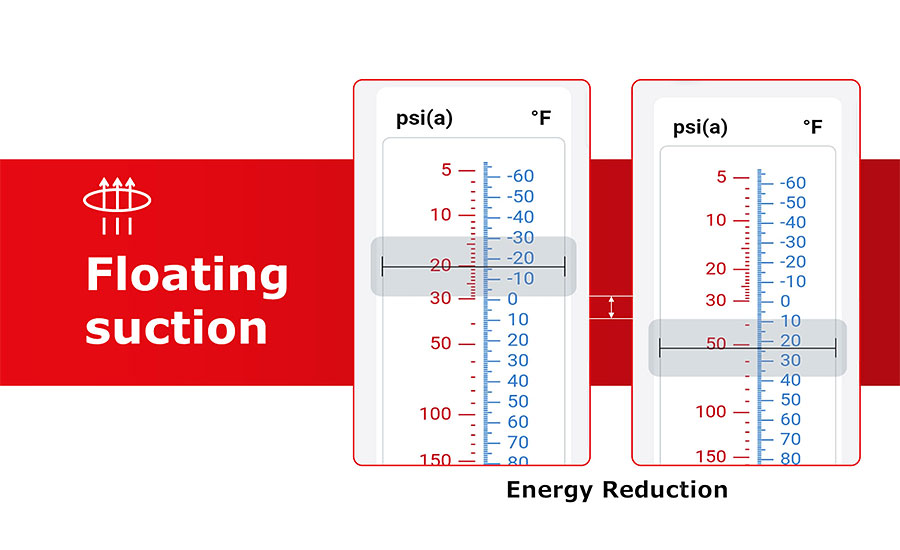 Floating the system suction pressure upward can help better match the load requirements of the facility. The payback for this is seen in reduced compressor operation. Image provided by Danfoss (Click on image to enlarge.)

Ambient conditions also should be taken into account. If it is really hot outside, it is going to be more difficult to maintain a lower discharge pressure simply by turning on all the equipment and letting it run at 100 percent. Instead, use humidity and temperature to get the wet-bulb temperature.

For evaporative condensers, the lowest discharge pressure possible corresponds to the saturated liquid pressure at the wet-bulb temperature plus a condenser approach temperature. Using wet bulb, it is possible to determine what the minimum condensing pressure will be and use that value as the floating setpoint for the condenser pressure. By combining floating suction pressure control and floating discharge pressure control, the amount of work needed by the compressor can be reduced, cutting energy demand.

The third primary means of increasing efficiency is via load management. Electrical companies charge different rates based on the time of day. With modern control systems, it is possible to shift load demands to off-peak times when kilowatt usage is at a lower cost. In these times, the cooling is ramped to a much lower setpoint, and the facility uses a battery or flywheel during the peak times. This allows the system to idle during the day when the cost of energy is relatively expensive.

Many electricity companies base their rates on demand as well as time of day. Demand charges are determined by the highest 15 minutes average use. For example, if the facility uses a lot of power in a short 15-minute window, the charges on the monthly bill are based on that 15-minute window. To combat this issue, processors can monitor energy usage in various areas of the facility. When kilowatt usage starts to rise, load is dropped off to reduce overall demand. For example, if six evaporators are running in a cold-storage facility that is already at its setpoint, four of the evaporators can be dropped off to reduce demand. This practice can reduce peak demand charges significantly. 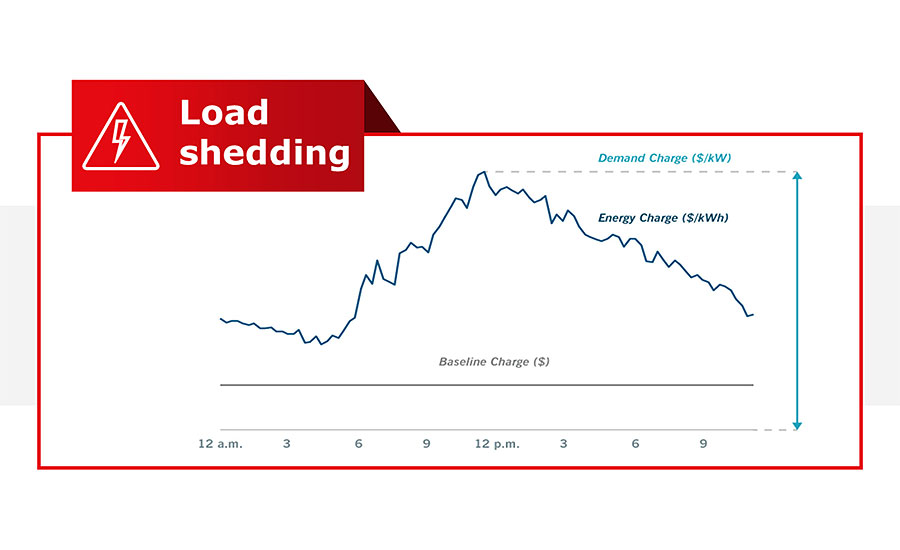 Many electricity companies base the rate billed on both the time of day and demand. Demand charges are determined by the highest 15 minutes of average use. By monitoring energy usage in various areas, a facility can drop off load when the kilowatt usage starts to rise and minimize demand charges. Image provided by Danfoss (Click on image to enlarge.)

One way to ensure food safety is to monitor temperatures inside the cold storage. Many modern control systems can operate facilities automatically and continuously without the need for human intervention. The controls send out automatic alarms and have automated responses to situations that arise. More industrial Internet of Things (IIoT) and web-based interfaces for remote monitoring are becoming available, and advanced analytics simplify condition monitoring. 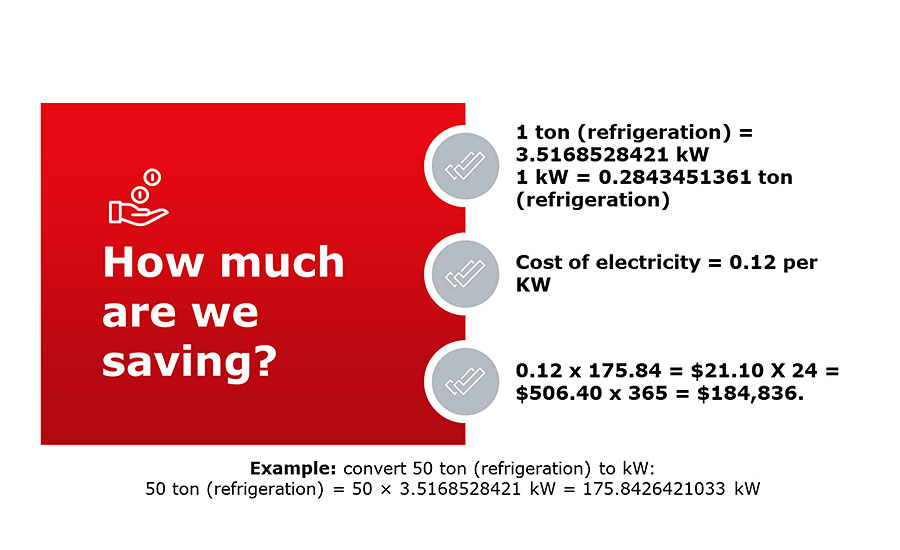 This diagram explores how much can be saved by following the principles discussed in this article. Image provided by Danfoss (Click on image to enlarge.)


4. Adhere to FSMA and HACCP Guidelines

Automated monitoring can help make it easier to follow the Food and Drug Administration’s Food Safety Modernization Act (FSMA) and hazard analysis and critical control point (HACCP) guidelines, particularly the requirements for automatic reporting. Modern systems can record data throughout the control system and save it for an extended period of time (though that depends on hard drive size). Having historical data gives facilities’ the ability to produce reports for later review. The reports also can be used with the verification, food process or food safety reviews during third-party audits. 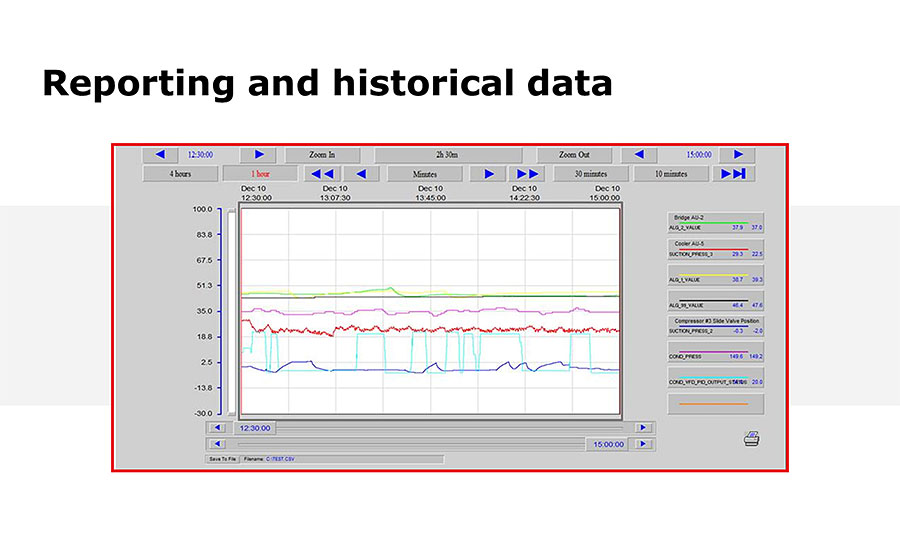 Having stored historical data allows the facility's personnel to produce reports for later review. These reports can help with the verification, food process or food safety reviews during third-party audits. Image provided by Danfoss (Click on image to enlarge.)

Continuing the thread of continuous monitoring and automatic responses, this lends itself well to transition to more climate-friendly refrigerants. Whether the system is using ammonia, carbon dioxide, propane or low GWP HFOs, having safety and reliability helps ease the transition to different refrigerants. Advanced algorithms allow the system to be adjusted to the new refrigerants while making the system as energy efficient as possible as well as having leak detection for personnel safety for anyone that might be in the facility. 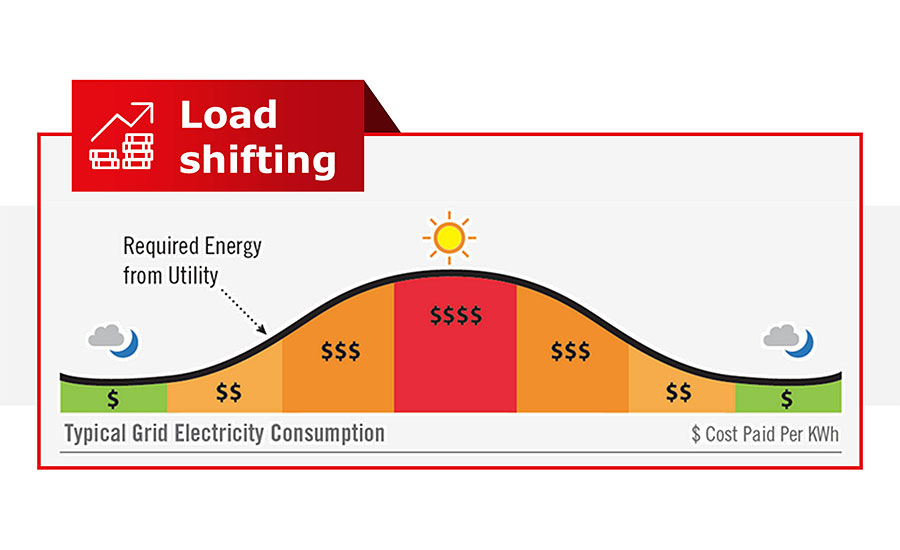 Modern control systems can be used to shift the load demands to off-peak times, where kilowatt usage is at a lower cost. The facility can ramp the cooling to a much lower setpoint during off-peak hours and then use a battery or flywheel during peak times. This allows the system to idle during the day when the cost of energy is higher. Image provided by Danfoss (Click on image to enlarge.)

David Jametsky is a business development manager at Danfoss AAIM Controls. The Baltimore-based company can be reached at 888-326-3677 or visit danfoss.us.

5 Things to Consider When Choosing a Refrigeration Condenser