In its Vista, Calif., manufacturing facility, Bachem produces — peptides amino acid chains made up of two to 50 substituents, linked by peptide bonds — and related APIs. Nitrogen is used to provide inert atmospheres in the process vessels and to pressurize liquid transfers between operations. It is important to remove the trace organic solvents that are entrained in the nitrogen streams before they are vented to the atmosphere. 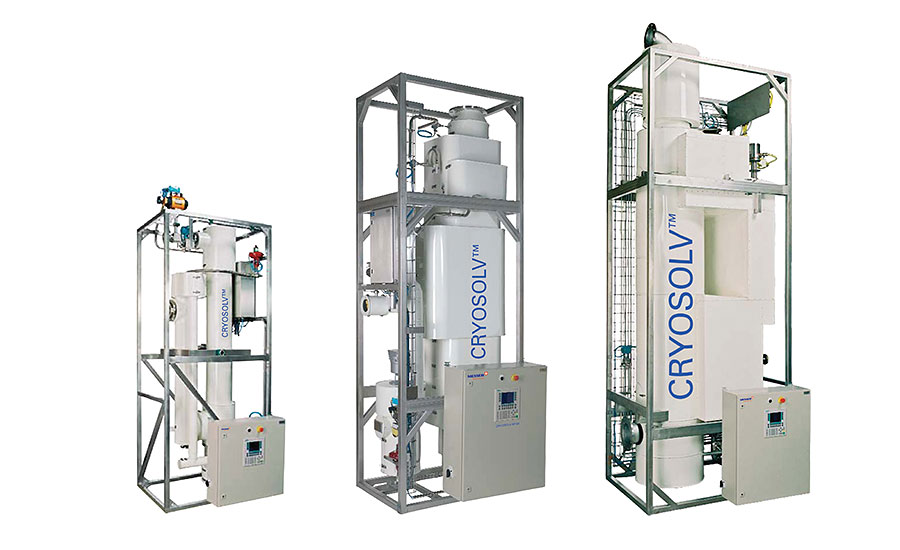 The vapor emission control is used to reduce the atmospheric emission of VOCs. (Click on image to enlarge.)


Bachem selected cryogenic condensation. During cryo-condensation, as it is sometimes called, cryogenically cold temperatures from liquid nitrogen (LIN) are used to condense and capture VOCs from air or gas. LIN, with a boiling point of -320°F (-196°C), can be used to cool gas streams and condense several different types of VOCs, to allow their capture or recovery. In addition, the nitrogen used to cool the process gas can be reused to supplement the nitrogen distribution system, which is needed in the manufacturing process.

To reduce air emissions of these volatile organic compounds (VOC), Bachem investigated various abatement technologies. Thermal oxidation was considered and quickly discarded: it had too large of a footprint and would create ground vibration and excessive noise. In addition, costs were high for the scale of the problem. A second option, a carbon-based scrubber, was eliminated because it would result in an additional liquid waste stream and increased solid waste in the form of spent carbon.

Cryo-condensation provides an effective return on investment for lower flow, high concentration gas streams. Manufacturers like Bachem, who are already using nitrogen for other purposes, can take advantage of cry-condensation by re-using the evaporated nitrogen. The waste solution allowed Bachem to reinvest in its Vista site.

Bachem selected a proprietary vapor emission control (VEC) system to reduce the atmospheric emission of VOCs. The system uses LIN to recover such VOCs as hydrocarbons, halocarbons, alcohols and volatile natural compounds. The cryo-condensation unit consists of a heat exchanger, temperature and pressure transmitters, automated valves and a control system.

The VEC system is suitable for cleaning process gases containing elevated VOC levels and process gas flows less than about 35,000 scf/hr. The condensation point of the substances to be condensed generally should be below -22°F (-30°C). The module can be customized for manufacturers with process gases that do not meet standard criteria, however. At Bachem’s Vista location, the cryogenic system supplier specified a sub -158°F (-70°C) temperature to attain effective VOC removal. 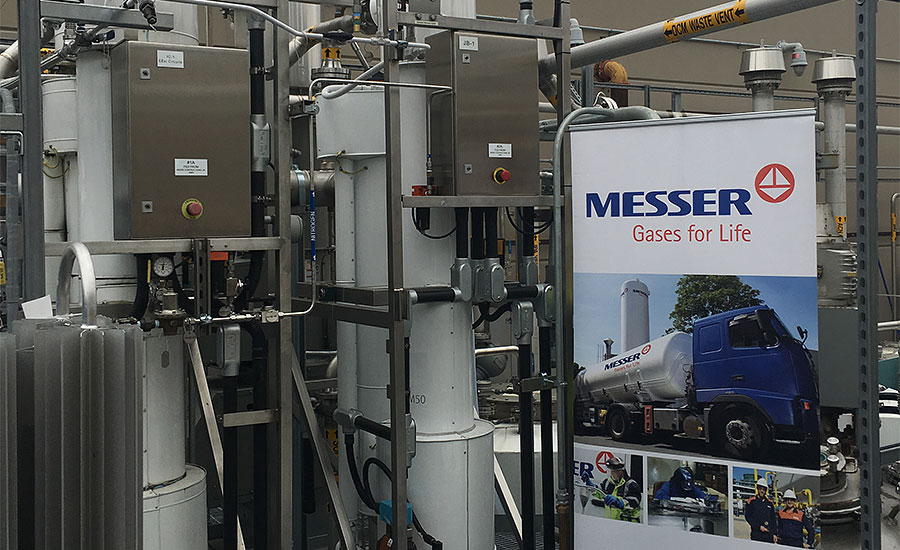 Bachem installed two cryogenic condensation vapor emission control modules at its facility to remove more than 99.8 percent of VOCs from its process stream. One unit operates at a time. The second unit is on standby and takes over when the first goes into defrost mode. (Click on image to enlarge.)


Bachem determined the cryo-condensation system was the best available control technology (BACT) and chose the VEC system for several reasons:

The condensed VOCs often are a mixture and are in small volumes that are not separated easily or efficiently for reuse or recycling. Once the collection vessels are full, their contents are trucked to a specialized waste-disposal facility.

In 2017, Bachem installed its first vapor emission control unit, a model with a 2,000 scfh (50 Nm3/hr) flow rate. The company added a second module in September 2019. Only one unit is active at any given time. The second unit is on standby and takes over when the running unit goes into defrost mode. 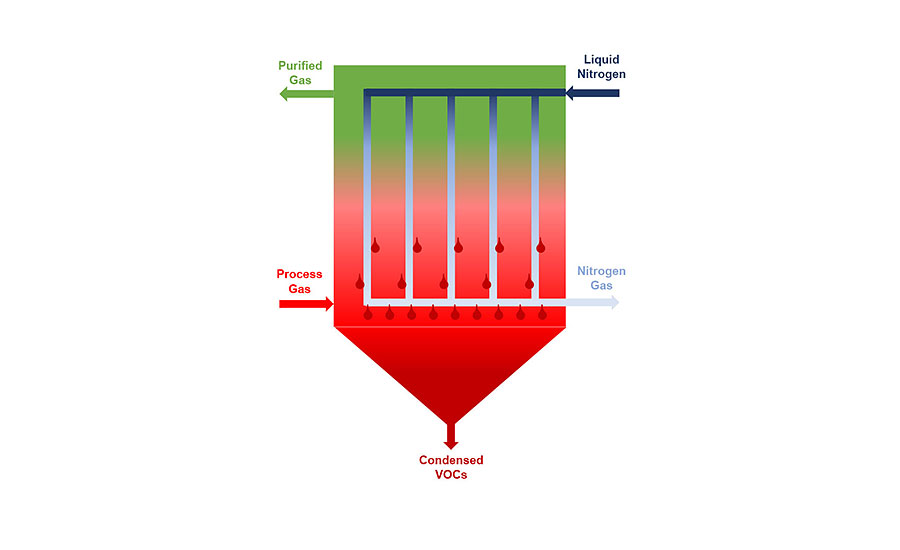 
Table 1 shows the results of a source test conducted by the San Diego County Air Pollution Control District. The data shows the concentrations of several VOCs before the emissions stream entered the cryogenic condensation system as well as the values of the exhaust after it exited the activated carbon beds, which are placed in series with the cryogenic condensing unit. The tests show a VOC abatement of 99.896 percent to 99.999 percent by weight.

Cryogenic condensation with the vapor emission control system provided a clean and economical option for Bachem. In contrast, thermal oxidizers — a considered but rejected emissions control technology — can increase NOX emissions, thereby creating another problem while eliminating VOCs from an exhaust stream. For Bachem and companies like them, that can reuse the nitrogen gas for other processes, the economics of VOC removal improve even more. 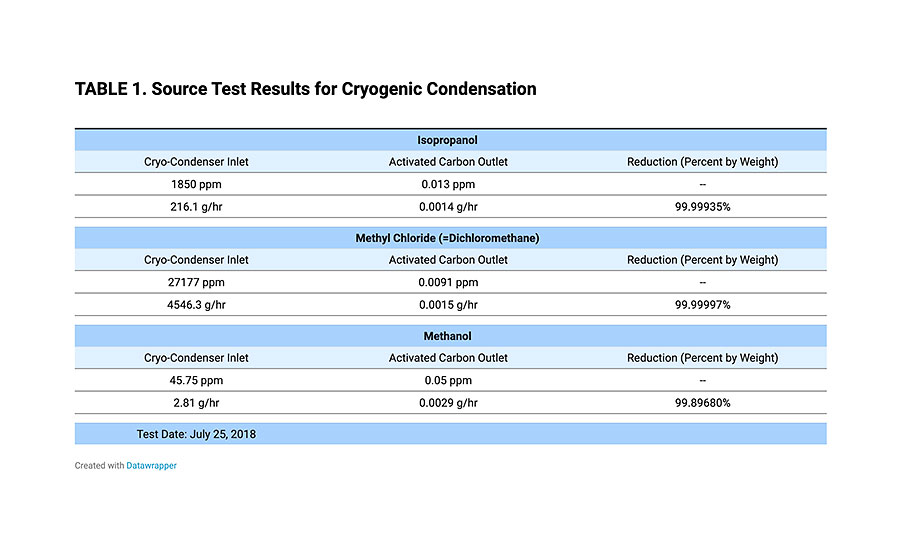 
In conclusion, as the pharmaceutical industry continues to grow, good environmental stewardship has become a priority. Air-quality monitoring is expected to become more stringent in the coming years.

Cryogenic condensation can be used to ensure that fugitive emissions are captured and not released to the environment. It is expected that the list of acceptable VOC emissions will only become more stringent over time and equipment such as cryogenic condensers can play a role in meeting sustainable manufacturing practices.

While cryogenic condensation is used by pharmaceutical manufacturers such as Bachem, it also is suitable for industrial, chemical, specialty chemical, petrochemical and biodiesel production. Potential applications include solvent and hydrocarbon storage tanks that already use nitrogen for blanketing as well as chemical plants or storage terminals that must handle increasing levels of volatile emissions due to expansion.

Neeraj Saxena is the director of chemistry, energy and environmental industry with Messer Americas, Bridgewater, N.J. For more information from Messer Americas, call 800-755-9277 or visit messeramericas.com.