The worst ODSs such as Freon2, a CFC, were banned in 1995 with the Clean Air Act. But, these restrictions are becoming even more strict. As of January 1, 2018, even less-damaging refrigerants such as hydrofluorocarbons (HFCs) — commonly used as replacements for Freon — are considered ODSs and more strictly regulated by the Environmental Protection Agency (EPA).

One of the most popular natural refrigerants is ammonia. Ammonia is a chemical consisting of one atom of nitrogen and three atoms of hydrogen. It is designated in chemical notation as NH3.

Ammonia is produced commercially using the Haber-Bosch Process, which combines nitrogen from the air with hydrogen, derived mainly from natural gas (methane), to form ammonia. Ammonia is extremely soluble in water and is frequently used as a water solution called aqua ammonia. It chemically combines with water to form ammonium hydroxide. Household ammonia is a diluted water solution containing 5 to 10 percent ammonia.

For transportation and for refrigeration systems, liquid ammonia is stored in closed containers under pressure. In the case of a catastrophic rupture of a tank and release, the ammonia will be spilled partly as vapor and partly as a boiling liquid, which will spread over the ground whilst evaporating. The vapor quickly becomes visible as a white cloud by absorption of, and reaction with, the moisture in the air. Initially, the cloud is cold and heavy, but gradually, while dispersing and drifting with the wind, it heats up and becomes a buoyant gas.4 Normally, ammonia in its gas form will quickly rise and disperse because its molecular weight of 29 g/mol is nearly double that of water (17 g/mol).

In comparison to the other natural refrigerants such as carbon dioxide (CO2), commonly known as R744, and propane, commonly known as R290, ammonia is the least expensive and is readily available. It has low global warming potential (GWP) and ozone-depletion potential (ODP) values. With proper safety processes, including training, effective leak detection and the use of personal protective equipment (PPE), ammonia can be a safe, highly efficient refrigerant. But, because ammonia gas is highly toxic and, under certain circumstances, combustible, it can pose significant health risks.5

In this article, I will review some of the dangers and discuss technologies to protect personnel and help ensure plant safety and productivity.

As mentioned, while ammonia has many advantages as an industrial refrigerant in terms of its efficiency in cooling and total cost of operation, it can pose certain risks to both personnel and facility. The key concern is with a leak, during which personnel can be exposed to high levels of ammonia, causing inhalation and skin issues. 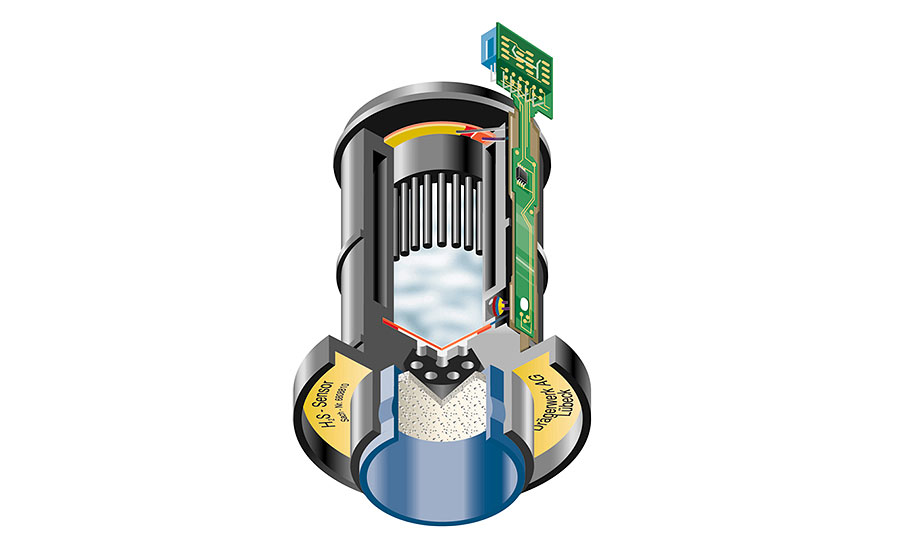 A low concentration range detector uses an electrochemical sensor that can accurately detect gases at 0 to 1,000 ppm. This type of leak detector often is used to initiate an emergency ventilation operation. Image provided by Dräger (Click on image to enlarge.)

Ammonia can cause severe reactions. It interacts immediately upon contact with the available moisture in the skin, eyes, oral cavity, respiratory tract and, particularly, mucous surfaces to form the very caustic ammonium hydroxide. Ammonium hydroxide causes necrosis of tissues through disruption of cell membrane lipids (saponification), leading to cellular destruction. As cell proteins break down, water is extracted, resulting in an inflammatory response that causes further damage.

Inhalation. Inhalation of ammonia may cause nasopharyngeal and tracheal burns, bronchiolar and alveolar edema, and airway destruction, resulting in respiratory distress or failure. Normally, exposure to ammonia can be avoided because its odor threshold is sufficiently low to provide adequate warning of its presence. (Its odor threshold is 5 ppm while the OSHA permissible exposure limit is 50 ppm.) Ammonia causes olfactory fatigue or adaptation, however, making its presence difficult to detect when exposure is prolonged. Sufficient warning of the presence of ammonia is critical because asphyxiation may occur in poorly ventilated or enclosed areas.6

Skin/Eye Contact. The extent of injury produced by exposure to ammonia depends on the duration of the exposure and the concentration of the gas or liquid. Even low (100 ppm) airborne concentrations of ammonia may produce rapid eye and nose irritation. Higher concentrations may cause severe eye injury. Contact with concentrated ammonia solutions such as some industrial cleaners (25 percent) may cause serious corrosive injury, including skin burns, permanent eye damage or blindness. The full extent of damage to the eyes may not be clear until up to one week after the injury is sustained. Contact with liquefied ammonia can cause frostbite injury.

Due to the potential dangers of working with ammonia, having proper training of personnel, combined with a comprehensive plan for safety management and emergency response, is essential to ensuring worker safety. Two critically important components of the safety-management plan are to wear appropriate gas-detection devices and to have proper personal protective equipment (PPE) that is fit tested and well maintained.

The first step to determine the correct PPE for any application is to have a proper hazard analysis of the work area. During this process, the time-weighted average (TWA) and short-term exposures (STEL) are determined. According to OSHA7, the TWA is the employee’s average airborne exposure in any eight-hour work shift of a 40-hour workweek that shall not be exceeded. The eight-hour TWA permissible exposure limit (PEL) is the level of exposure established as the highest level of exposure an employee may be exposed to without incurring the risk of adverse health effects. The STEL is defined by the American Conference of Governmental Industrial Hygienists (ACGIH) as the concentration to which it is believed that workers can be exposed continuously for a short period of time without suffering from irritation, chronic or irreversible tissue damage, dose-rate-dependent toxic effects or narcosis of sufficient degree to increase the likelihood of accidental injury, impaired self-rescue or materially reduced work efficiency. The STEL 15-minute TWA exposure should not be exceeded at any time during a workday even if the exposure is within the eight-hour TWA limit.8

Once the current and potential exposure levels are determined, the appropriate assigned protection factor (APF) is calculated. All PPE is rated to a certain APF and, by using the NIOSH pocket guide9, the proper protection can be found. For ammonia, at lower levels of ammonia (up to 300 ppm), use a full-face respirator with appropriate ammonia cartridges is required. Entry into areas with concentrations above 300 ppm, or unknown concentrations, requires a self-contained breathing apparatus (SCBA) or supplied air. Higher concentrations require full encapsulation suits (Level A). 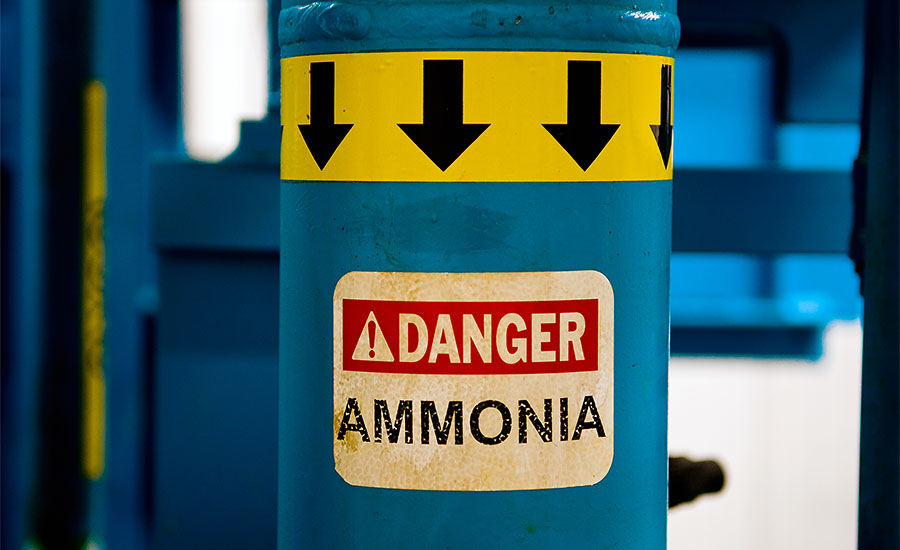 With proper safety processes, including training, detection and personal protective equipment (PPE), ammonia can be a safe and highly efficient refrigerant. But because ammonia gas is highly toxic and, under certain circumstances, combustible, it can pose significant health risks. Jupiterimages/PHOTOS.com/Getty Images Plus (Click on image to enlarge.)


Ammonia Gas Can Be Explosive

While ammonia is considered a nonflammable gas, under very specific conditions, it can be explosive. To be explosive, it requires a temperature of at least 1200°F (649°C) and concentrations of more than 150,000 ppm, which is a rare occurrence. At these conditions, if there is an ignition catalyst or source such as a spark, ammonia can combust, releasing toxic nitrogen oxides.

Because ammonia can be explosive when atmospheric concentrations reach above 15 percent, its lower explosive limit (LEL) is 15 percent. In order to proactively protect against an explosion, at 15 percent LEL, all activity should be stopped (e.g., an automated engine room shutdown). The area should already have been evacuated at any signs of a leak.

One of the proactive ways to protect against exposure to ammonia — and from a potential explosion — is through detection of the gas. By setting up the appropriate fixed gas-detection system, workers and management can immediately be alerted if there is a leak and, at higher concentrations, engine rooms can be shut down automatically. Portable gas detection is essential to protect at the employee level because gases move, depending on the airflow and atmospheric conditions.

Fixed Gas-Detection for Ammonia Gas. Choosing the appropriate detection sensor for an application depends on the expected concentrations, locations and other factors at a facility. Often, two separate ammonia sensor technologies are required: one for emergency ventilation control and the other for machinery room electrical shutdown.

In these applications, ventilation control is initiated automatically when ammonia reaches lower concentration levels, typically measured in parts per million. Machinery rooms are often shut down at much higher concentration levels, so a different sensor technology needs to be used. These high concentration sensors measure the concentration in terms of the percentage of the lower explosion limit of gases. Both sensor types are used in transmitters that protect and then communicate information from the sensors to a controller, which interprets the data and can be programmed to engage automatic emergency responses.

A low concentration range detector uses an electrochemical (EC) sensor that can detect gases at 0 to 1,000 ppm accurately. It often is used as an input to initiate an emergency ventilation operation. 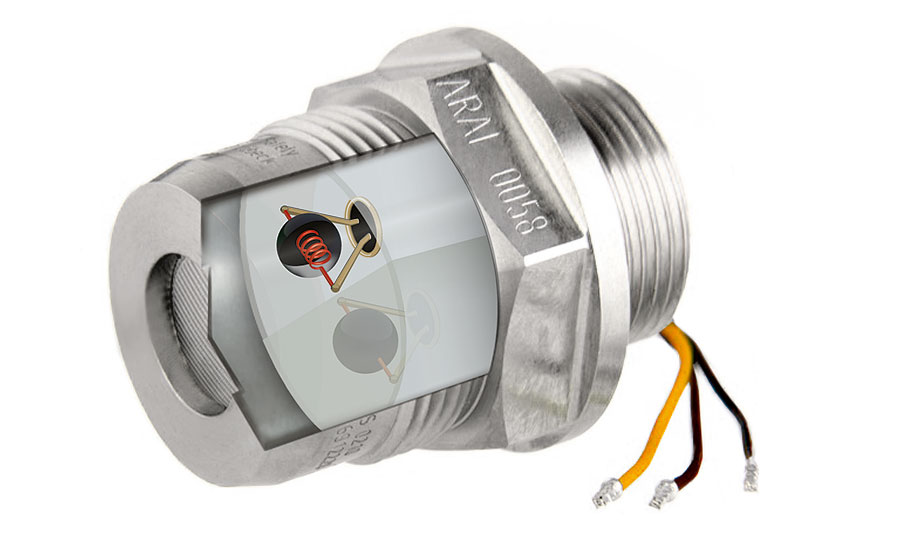 Electrochemical sensors are essentially fuel cells composed of noble metal electrodes in an electrolyte. The electrolyte normally is an aqueous solution of strong inorganic acids. When a gas is detected, the cell generates a small current proportional to the concentration of the gas. IIAR recommends ventilation be initiated automatically at 150 ppm.10

In conclusion, the importance of ammonia as an industrial refrigerant has increased with the discovery of the potent greenhouse effect of fluorocarbons, which were favored previously. Although anhydrous ammonia is widely used because of its high energy efficiency and low cost, it has recently been classified by NIOSH as an Immediately Dangerous to Life and Health (IDLH) substance at concentrations above 300 ppm.

A combination of ammonia gas-detection technologies — including fixed systems and portable gas detectors, along with the appropriate use of PPE — can help ensure a safe and productive working environment for facilities that rely on industrial refrigeration for their processes.

1EPA regulation (40 CFR Part 82, Subpart F) under Section 608 of the Clean Air Act. Only EPA-certified technicians are allowed to purchase ozone-depleting substances (ODS) used as refrigerants. Technicians may be certified under either Section 608 or Section 609. Natural refrigerants: ammonia and carbon dioxide. Retrieved October 29, 2021. https://www.ecfr.gov/current/title-40/chapter-I/subchapter-C/part-82/subpart-F and https://www.epa.gov/section608/section-608-clean-air-act

2Freon is a registered trademark of DuPont, and its spin-off, Chemours. Retrieved October 29, 2021. https://www.freon.com/en

Mark Heuchert is the marketing manager, ADM, North American region, for Dräger. The Houston-based company can be contacted at 800-437-2437 or draeger.com.

Ammonia Safety Day Planned for May 30