Ammonia (NH3) is used as a coolant in many large industrial refrigeration systems. While anhydrous ammonia refrigeration has long been a standard in the food and beverage industry, it also is found in pharmaceutical production, air-conditioning equipment and electric power generation plants. Ammonia is a toxic gas, though, and the proper safety monitoring procedures and equipment must always be in place to avoid serious accidental injury or death.

Ammonia refrigeration is considered cost efficient and has been credited with keeping the price of food at affordable levels in the United States. It also plays a role in various types of cold storage warehouses and ice production as well as in the floral industry. Ammonia industry experts say its use in refrigeration systems does not destroy ozone or contribute to the greenhouse effect linked to global warming.

When installed and maintained properly, with trained operators as well as safety equipment and procedures in place, ammonia refrigeration is generally considered safe. The accidental release of pressurized ammonia from refrigeration systems, however, creates a toxic gas hazard that can injure workers, damage plant equipment and potentially affect the general public outside the plant environment.

A colorless gas, ammonia occurs naturally in the environment. It also is manufactured for industrial purposes such as refrigeration. In nature, bacteria, decaying plants and animals, and animal waste in the soil produce the gas. Ammonia is manufactured by mixing natural gas with steam, which is reformed over a catalyst bed to produce hydrogen and carbon dioxide (CO2). The hydrogen and nitrogen, from the air, react in a final catalyst bed to produce ammonia gas, which is cooled for tank storage.

Refrigeration systems using ammonia can be found in the following food and beverage industry applications:

Reasons for their increasing use are they are considered cost efficient and environmentally friendly.

The Occupational Safety & Health Administration (OSHA) has set a limit of 25 parts per million (ppm) in the workplace during an eight-hour shift and a short-term limit (15 minutes) of 35 ppm. International standards for ammonia exposure are similar to those in the United States. The effects of ammonia exposure range from irritating smells to life-threatening situations.

The Environmental Protection Agency (EPA) regulates ammonia under the Clean Air Act’s General Duty Clause [Section 112(r)(I)] and Risk Management Program (RMP) Rule (40 CFR 68). Facilities with more than 10,000 pounds of ammonia are required to develop a hazard assessment, a prevention program and an emergency response program. In addition, they must submit a risk-management plan to the EPA.

Reliable ammonia detection ensures both personnel safety and product quality. The nose may detect ammonia in concentrations as low as 5 ppm. Typical exposure symptoms are irritation of the eyes, throat and respiratory organs. At a few hundred ppm, irritation of the mucus membrane of the eyes occurs. Breathing is intolerable at about 1,000 ppm, and vision may be impaired. The risk of fatality rapidly increases at concentrations of around 2,500 ppm.

In addition to personal injury, ammonia accidents can result in considerable equipment, material, product and property losses. According to the EPA and Factory Mutual, ammonia releases have resulted in several catastrophic losses ranging up to several million dollars. Such losses have resulted from ammonia contamination of products as well as explosions because ammonia is potentially combustible. 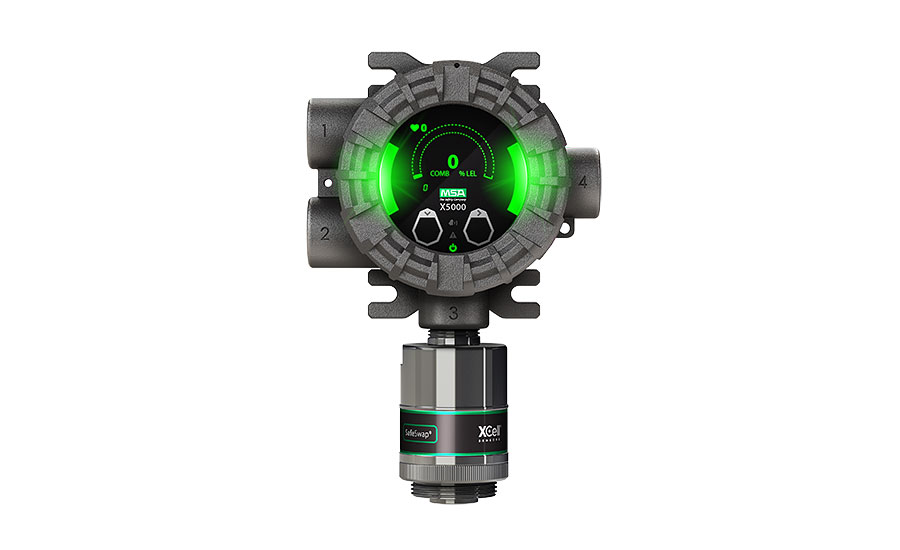 Along with proper equipment, maintenance, training, etc., the U.S. Environmental Protection Agency (EPA) recommends the use of ammonia gas detectors in facilities that are not manned around the clock (24 hours a day). Even if a plant is manned around the clock, plant managers may want to install fixed ammonia gas detectors near refrigeration equipment to reduce the risk of injury to workers.

The EPA’s Chemical Accident Prevention Group has been evaluating facilities with ammonia refrigeration systems and has compiled a list of steps that plant operators can take to reduce the likelihood and severity of ammonia accidents. These preventive measures as well as more information on ammonia refrigeration are available online from the EPA.

Ammonia is liquefied under pressure in refrigeration units. When accidentally released to the atmosphere and undetected, ammonia becomes an aerosol that is a mixture of liquid and vapor. Once in the air, the ammonia becomes a cloud that can travel through a plant — and beyond into surrounding neighborhoods, posing a general public health threat.

Many types of fixed gas sensors are available to detect ammonia vapor within industrial applications. Let’s look at the operating principles behind some of the more commonly available technologies with an eye toward understanding their strengths and potential weaknesses.

Electrochemical sensors function on principles like those found in batteries. The target gas enters the sensor through an inlet and then generates a chemical reaction with a catalyst that is in contact with an electrode. When the target gas encounters an electrolyte solution on the working electrode, a reaction occurs. This reaction causes a release of electrons, whereby the flow of the electrons is measured as current within the sensor. Consequently, the current is proportional to the gas concentration, and the reaction is measured in parts per million (ppm) of the gas. In the case of ammonia sensors, the electrolyte includes an active ingredient that is consumed in the electrochemical reaction used to detect ammonia. Thus, the lifespan of the sensor is directly related to its amount of exposure to NH3. Once the exposure life of the sensor is exceeded, it is no longer capable of detecting gas and will need to be replaced. The positive benefits of this type of sensor include good low ppm range resolution and acceptable cold temperature performance. 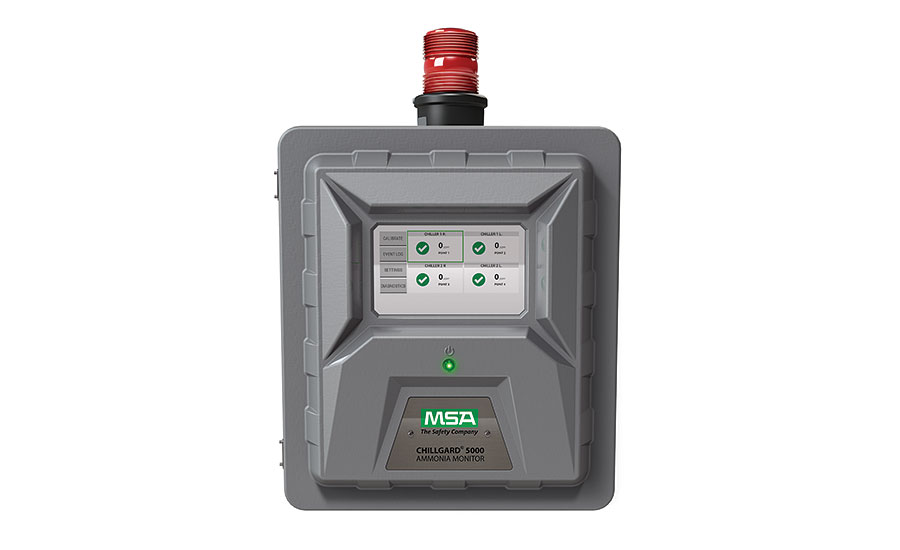 Infrared Sensors. Optical infrared (IR) sensors have been used for decades to monitor combustible and toxic gas leaks, including ammonia. The key benefits of non-dispersive infrared (NDIR) sensors are their high specificity to ammonia and reduced (or even eliminated) need for calibration adjustment. Infrared detectors have a wide dynamic range, and they are not degraded or consumed by exposure to high concentrations of ammonia. Their main limitations are the physical size of the detector assembly, the need to protect the detector against the potential effects of fluctuating temperature and humidity, and higher cost compared to other detectors.

Photoacoustic Infrared Sensing Technology. Photoacoustic infrared (PAIR) analysis extends beyond measuring the amount of infrared light that is absorbed, which is the case for the NDIR monitors already mentioned. This technology also detects what occurs after the gas is absorbed.

When using a photoacoustic infrared instrument, a gas sample is introduced into the monitor’s measurement chamber, and the sample is exposed to a specific wavelength of infrared light. If the sample contains the gas of interest, that sample will absorb an amount of infrared light proportional to the gas concentration that is present in the sample. 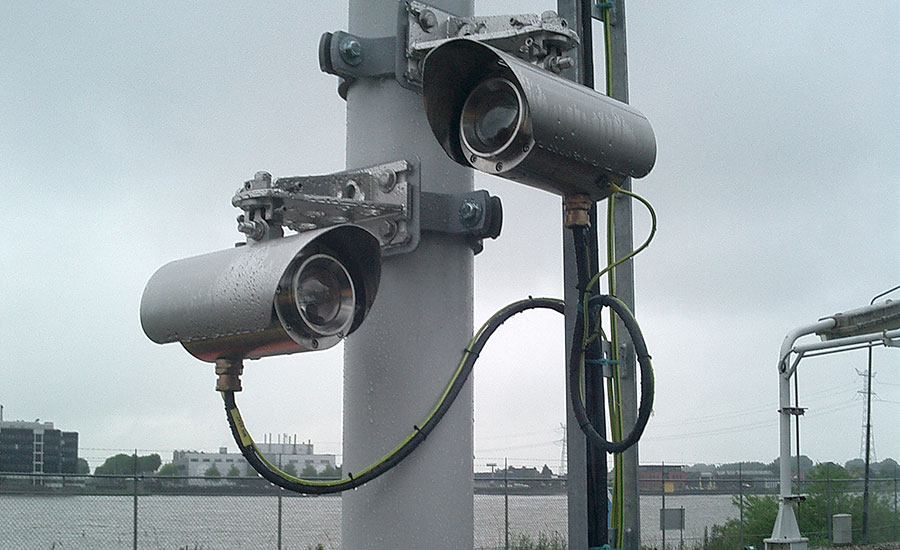 ELDS detectors can alert of ammonia gas leaks along fence lines to warn of threat of danger to neighboring communities. Image provided by MSA Safety

Enhanced Laser Diode Spectroscopy. Laser-based, open-path gas detectors are another technology using the effect of absorption of specific optical light by ammonia. This sensor technology utilizes enhanced laser diode spectroscopy (ELDS) that analyzes the signal using a technique called Fourier transform. In effect, it breaks the signal into several component parts that can be analyzed against a predetermined pattern that is similar to a harmonic fingerprint. Such a comparison eliminates the false alarms from interference gases, making the detectors less prone to water vapor interference, improving detector performance in rain or fog.

The ELDS transmitter/receiver configuration is designed to failsafe. It does not require calibrating or routine maintenance, and it does not have any consumable parts. These devices typically are located around the perimeter of a plant, process or storage area. Alternatively, they can be positioned in close proximity to specific items in a plant — like compressors, pump sets, pressure reducers, valves and pipe flanges — that pose a real risk of gas escape.

In conclusion, no single type of gas sensor is perfect or foolproof in all industries and applications. The keys to ammonia gas monitoring that drive success are understanding:

Many ammonia gas sensing technologies have improved through evolving designs, material advances and better construction technologies. In addition, sensors are now highly intelligent compared to 20 to 30 years ago. Modern benefits include diagnostics, self-regulation and network communication with other process safety systems in the cloud for remote monitoring to help keep facilities safe from ammonia gas leaks.

Sarah Rajasekera is the segment marketing manager with MSA Safety. The Cranberry, Pa.-based company can be reached at 800-672-2222 or visit msasafety.com.