An industrial process chiller is a system that removes heat from a liquid via vapor compression. The vapor-compression refrigeration cycle, in turn, is a process that relies on a phase change of the refrigerant in order to absorb heat from the fluid.

The refrigeration cycle depends on four major components for this process to work:

In an air-cooled chiller, this is done via cooler air passing over the condenser coil using a fan. In a water-cooled chiller, this is done by using a separate water source —for example, a cooling tower or city water — that is cooler than the condensing temperature of the refrigerant. Once the liquid refrigerant leaves the condenser, it goes to the expansion valve, which drops the high pressure, high temperature liquid to a low pressure, low temperature liquid before it enters the evaporator again. The valve is regulated by monitoring the state of the refrigerant leaving the evaporator using a temperature and pressure sensor to actuate a small pin in an orifice that meters the right amount of refrigerant. The cycle then is repeated.

As the process load decreases, the leaving fluid temperature from the chiller will decrease, causing the compressor to slow down to avoid wasting unnecessary energy during load changes. The compressor has a DC motor that is controlled by an inverter drive. DC motors have the ability to control the speed over a wide range and have a low power demand on startup. The drive monitors the voltage and amperage along with other parameters. It works with the chiller control to keep the compressor operating at its most efficient point. The drive will even adjust the compressor speed to keep it operating safely (within its required parameters) when challenging conditions — for instance, a higher or lower ambient, or process temperatures that typically cause a chiller to shut down — exist.

These efficient chillers also use variable-speed condenser fans that in turn adjust speed to the most efficient operating point. This point is determined by an algorithm in the control that monitors all of the sensors included with the chiller. In conditions where the ambient temperature is low, the chiller will take advantage of this. It can automatically adjust the fan speed to keep the condensing pressure at its lowest to reduce the energy needed to compress the refrigerant.

Along with the variable-speed compressor and condenser fan, highly efficient chillers can incorporate an electronic expansion valve (EEV) rather than a mechanical valve. Mechanical valves operate on the system pressure, which can fluctuate with ambient and process temperature fluctuations, causing a loss in efficiency and reliability. The EEV does not need pressure to operate; instead, it is electronic. It works with the control algorithm to meter the refrigerant to the evaporator in order to make it operate as efficiently as possible. Also, the chillers can have more surface area on the evaporators than required for the full load in order to further improve efficiency. With some chillers, the control used can employ up to 10 pressure and temperature sensors along with other parameters from the compressor drive to control the compressor, condenser fan and EEV to an efficient, reliable operating point.

Chiller efficiency is a calculated ratio of the energy consumed over the amount of heat absorbed from the process fluid. Two commonly used efficiency ratios are: 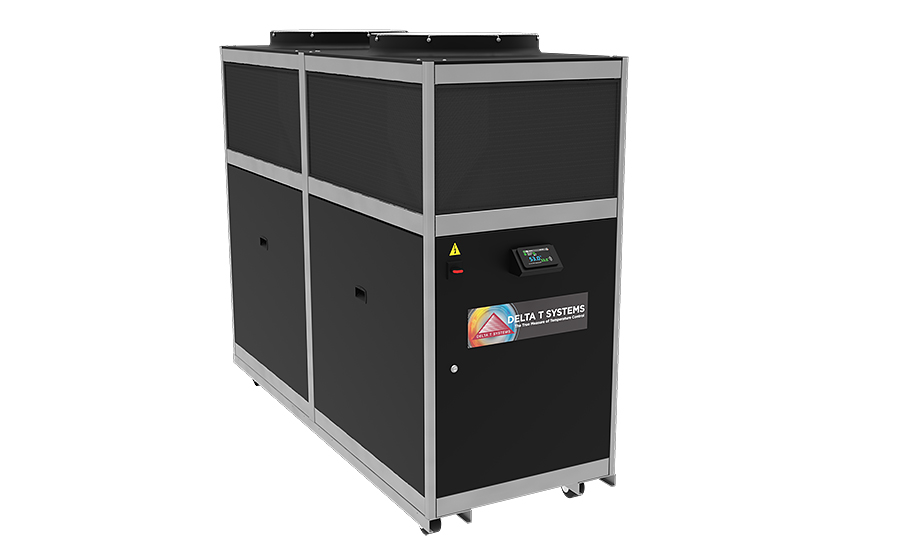 Units such as this 20-ton, air-cooled chiller can use variable-speed condenser fans that adjust speed to the most efficient operating point. Image provided by Delta T Systems Inc. (Click on image to enlarge.)

Energy-Efficiency Ratio (EER). EER is the ratio between the refrigeration capacity, or heat removed, in BTU per hour, and the electric power input, in watts. The units of measure of EER are BTU per watt in an hour. In simple terms, the higher the EER, the more efficient the system is.

Most companies publish their COP or EER at 100 percent load capacity of the chiller. Because a chiller does not always run at 100 percent capacity, however, this may not be an ideal representation of the typical equipment performance. Drawbacks include: 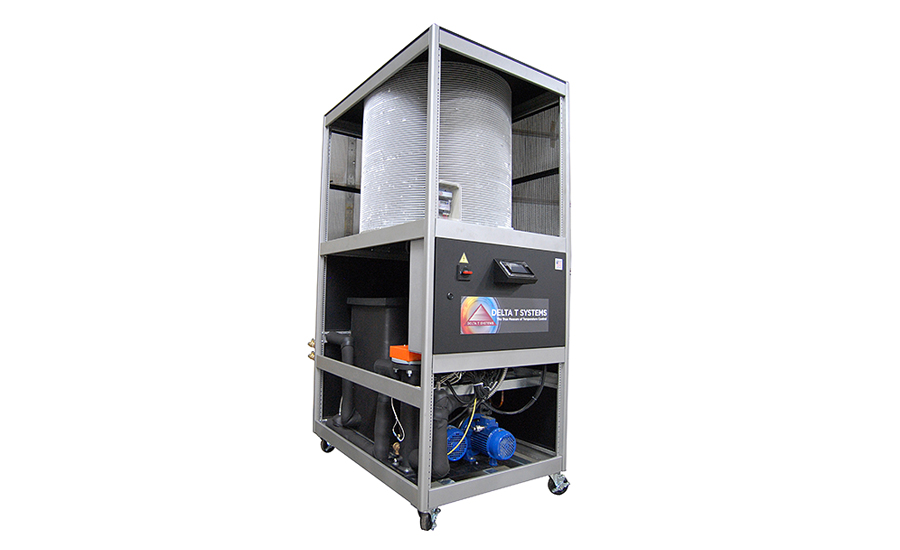 A heat/cool chiller can be used in any application where chillers and temperature control units are used in tandem. The use of variable-speed chillers can reduce electrical consumption by up to 50 percent over fixed-speed units. Image provided by Delta T Systems Inc. (Click on image to enlarge.)


The Air-Conditioning, Heating and Refrigeration Institute (AHRI) developed AHRI 550/590, a standard that defines the integrated partial-load value (IPLV) as a performance characteristic for chillers.

The IPLV is calculated using the efficiency of the equipment while operating at four capacities. 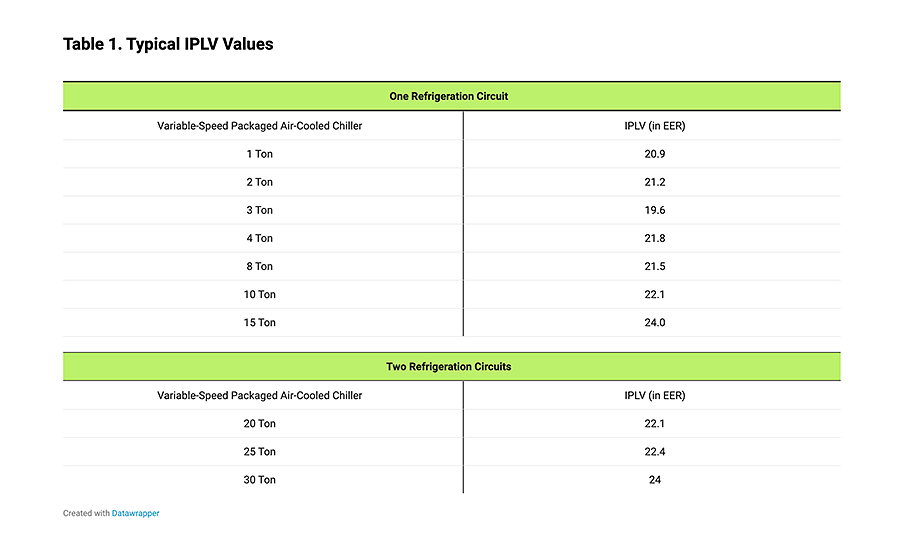 
The allocation of time running at these four loads is defined by AHRI as follows:

Given the above, IPLV is calculated:

Why is IPLV important? The IPLV can affect energy usage and operating costs throughout the lifetime of the process chiller equipment. In fact, electrical consumption is the largest operating cost in almost all chiller-based cooling operations.

Chillers that provide the highest IPLV ratings use variable-speed compressors, electronic expansion valves and variable-speed fan motors. These components, along with a proprietary control algorithm, can produce better efficiency.

In my testing, the IPLV ratings of some highly efficient process chillers can be up to 60 percent higher than comparable products with IPLV ratings of approximately 15 (EER). For instance, one high efficiency 10-ton chiller that was tested — operating 16 hours a day (two shifts), five days a week, 52 weeks a year, in a location with a $0.14 per KW-hr electric rate equates to about $450 per IPLV (EER) point per year. In other words, a difference of seven points in the IPLV rating could increase or decrease energy costs by $3,150 per year.

The IPLV values for a sample line of chillers are shown in table 1. Chiller manufacturers can provide this data during the RFQ process to aid in the equipment-buying decision.

Rick Holzhauer is the director of engineering with Delta T Systems Inc. The Richfield, Wis.-based company can be reached at 262-628-0331 or visit deltatsys.com.