Several factors should be considered when developing a cost-effective expansion joint design to ensure safe operation and reliability.

Shell-and-tube heat exchangers that serve as process coolers often require an expansion joint to relieve stresses in critical exchanger components. Several factors should be considered when developing a cost-effective expansion joint design to help ensure safe operation and reliability. Paying close attention to these details and working closely with the fabricator, from initial design to equipment installation and maintenance, can mean the difference between premature failure and a long, successful operating service life.


Why are Expansion Joints Needed?

The purpose of any heat exchanger is to use one fluid to heat or cool another fluid without mixing them together. In the case of shell-and-tube exchangers, one fluid passes inside the tubes (the tube side) while another fluid flows in the shell around the outside of the tubes (the shell side). There must be a temperature difference between the two fluids in order to exchange heat between them.

For example, in a process cooler, a designer might be trying to reduce the temperature of a process chemical. A shell-and-tube exchanger can be used, with the hot process chemical on the tube side and cooling water on the shell side. Heat is transferred from the chemical flowing in the tubes through the tube wall to the water on the shell side in the exchanger.

It is important to remember that the temperature difference makes the exchanger components — the tubes and shell — expand or contract at different rates.

In the cooler example, for instance, the shell is cooled by the water and does not thermally expand. The tubes are in contact with the hot process chemical, however, and they will grow in length due to the higher temperature. In fixed-tubesheet exchanger types — designs in which the tubes are fixed to stationary tubesheets at both ends — this creates compressive stress in the tubes. Tensile stress also is formed in the shell, and bending stress is created in the tubesheets that connect the tubes to the shell (figure 1).

All fixed-tubesheet heat exchangers have this differential thermal expansion that creates stress in the shell, tubes and tubesheets. This is the key consideration in the mechanical design of the exchanger. Often, the tubes and shell in an exchanger are constructed of different materials, which can increase the stress due to differential thermal expansion. One of the best ways to relieve these stresses is to add an expansion joint in the shell. 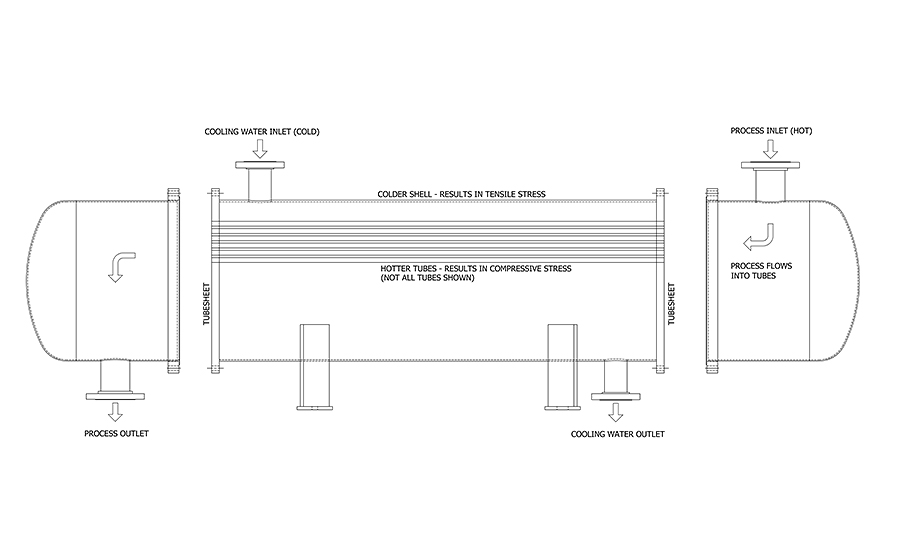 An expansion joint allows the exchanger shell to change length while maintaining the strength to resist internal pressure. The two main types of expansion joints are:

The flanged and flued design is usually about as thick as the shell and made of the same material. The shape of the joint adds axial flexibility to the shell (figure 2). An advantage of this type of expansion joint is its durability. They are quite strong and less likely to fail than bellows expansion joints.

Bellows-type joints are thinner and have multiple formed convolutions like an accordion (figure 3). The bellows are welded to the adjacent shell with a fillet weld. The big advantage provided by this type of expansion joint is flexibility. Bellows joints can be designed for a large amount of thermal expansion and, therefore, relieve the stress in an exchanger with a large temperature difference. Due to their thin walls, however, they are easily damaged in service and should always be protected with a metal shroud. Bellows joints can be made with many materials, but Alloy 625 is commonly used due to its high corrosion resistance, strength and flexibility. Stainless steels or other materials also can be used based on process design requirements and cost.

The stresses in the tubesheets, shells and tubes due to differential thermal expansion are evaluated during the exchanger design process. If the stresses are too high, an expansion joint may be needed, but other options are available. 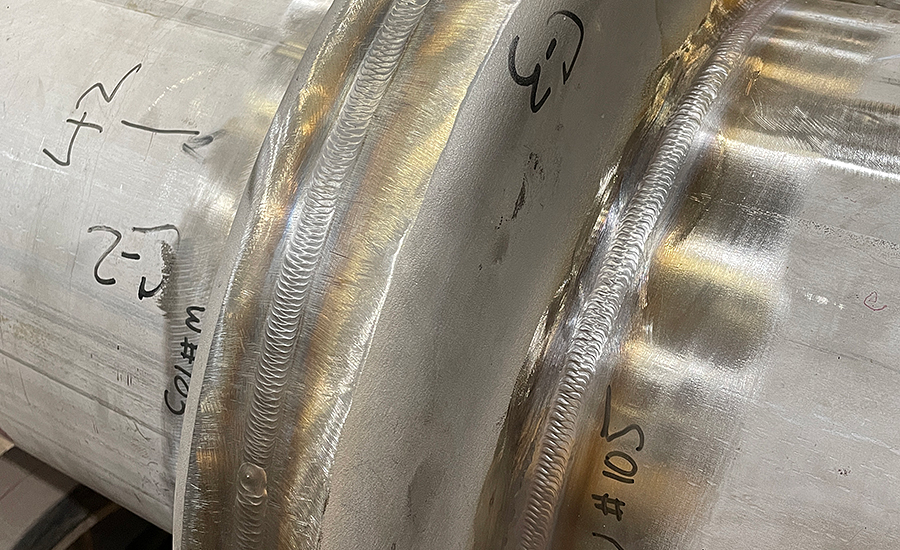 FIGURE 2. A flanged and flued expansion joint design is usually about as thick as the shell and made of the same material. The shape of the joint adds axial flexibility to the shell. Image provided by Ward Vessel & Exchanger (Click on the image to enlarge.)


First, it may be more cost-effective to increase the thickness of some components to reduce stress instead of using an expansion joint.

Second, it may be possible to change the exchanger materials to reduce relative expansion rates.

Third, although unlikely, it may be possible to make process changes to reduce the temperature difference in the two sides.

Fourth, it may be possible to change the exchanger configuration to a non-fixed-tubesheet type such as a U-tube exchanger or a floating-tubesheet type. Those types allow tube expansion and contraction without the use of an expansion joint; however, they may be more expensive or have other disadvantages.

Many different types of failures are possible if the thermal stress/expansion joint design is not correct. Tubes could buckle or crack, leaks could occur at tube-to-tubesheet joints, and the tubesheets, shell or the expansion joint itself could fail. Any of those failures could cause the release of a harmful chemical or hot steam — or potentially cause an explosion.

One common failure is mechanical damage to a bellows-type joint. Being thin allows them to be flexible, but it also makes them susceptible to damage. Problems could result from something as simple as a forklift bumping into it, an accidental arc strike from nearby welding, or a tool dropping onto it from above. The joint also could easily be damaged during handling and installation.

If a bellows expansion joint is damaged, it usually is not possible to weld repair it due to the thin material. The entire exchanger must be disassembled to replace it. There are options for custom-designed, bolt-on/clamshell repair assemblies, but these also are expensive and time-consuming repairs.

Because bellows-type joints are so easily damaged, they normally are supplied with shipping bars for added strength. The shipping bars must be removed prior to equipment startup because they will prevent the joint from expanding as designed. The joints also are usually provided with a protective shroud for service. Still, care must be taken to avoid damaging the joint during equipment installation.

The key element to heat exchanger mechanical design is the difference in temperature between the two sides. If the process temperature information given to the designer is inaccurate, the exchanger may be improperly designed for the true service conditions. This can lead to costly failures and repairs. The same can be true if an existing exchanger is placed in a new service with a temperature range in which it was not designed to operate. The manufacturer should be consulted before changing the exchanger service.

If not planned for in the original design, steam cleaning the tubes can easily cause damage as well. Steam heats the tubes faster than the shell and will cause the tubes to grow in relation to the shell. This, in turn, will lead to compressive stress and could cause tube buckling, cracking or pushing out of tube-end welds.

It is important to understand (and communicate to the fabricator/designer) the true process temperatures for which the exchanger should be designed. This includes not only the steady-state case of normal operation but also any other cases where different temperature fluids may be present. These include temperature deviations due to startup and shutdown, process upsets or steam-cleaning conditions. 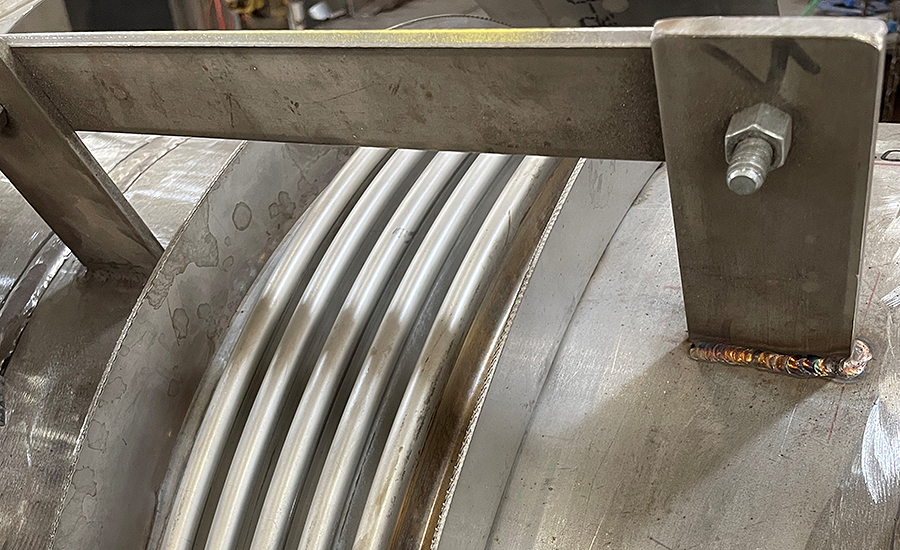 FIGURE 3. Bellows-type joints are thinner and have multiple formed convolutions like an accordion. The removable shipping support is shown near the top of the exchanger in this photo. Image provided by Ward Vessel & Exchanger (Click on the image to enlarge.)

In conclusion, after fully understanding and considering all process and other design conditions, and with the knowledge of the advantages and disadvantages of expansion joint types, a manufacturer can design and build process cooling equipment with expansion joints that provide a safe, reliable and long service life.

Remember that no detail is too small to discuss with your equipment fabricator. Regular communication with the contractor you select — from the request for proposal to installation support — is key to your project’s success.

5 Factors to Discuss with Your Fabricator

This article was written by the engineering team at Ward Vessel & Exchanger, Charlotte, N.C. The company can be reached at 704-568-3001 or visit wardvesselandexchanger.com.