The ability of a thermoelectric cooler to handle larger heat loads and larger enclosures means that engineers working in certain fields — power distribution, power generation and related specialty equipment manufacturing — might find themselves looking at thermoelectric coolers for the first time.

This article will explore the most urgent factors to consider when specifying a thermoelectric enclosure cooler. This exploration will be followed by practical “what-to-expect” knowledge, which should prove helpful to those new to specifying thermoelectric cooling. Modern thermoelectric coolers can be useful in more products than ever before due to the advent of high performance, high efficiency products.

When choosing a thermoelectric enclosure cooler, the most important factors to consider are fan type, allowable enclosure temperatures, ambient temperature range and how much cooling is needed.

Fan Type. It cannot be stressed enough that maintaining the integrity of the enclosure will better protect its contents. Thermoelectric air conditioners create a closed-loop cooling system. They are meant to maintain the enclosure’s environment rating and operate in that environment.

Thermoelectric air conditioners often do — and should — have both internal and external IP ratings. The external rating is influenced most by the hot-side fan selection. This is the fan that is external to the enclosure. For example, seaside or desert environments call for external fans that can withstand corrosives such as salt spray or blowing sand. An indoor enclosure in an industrial environment might be exposed to spraying water during washdown.

It is paramount to check with the manufacturer about what type of fan is being used in an enclosure cooler and to ask what other choices are available. Always ask whether the fan is third-party certified to be suitable for your enclosure’s NEMA or IP rating (table 2).

When adding a cooling system, the environment in which the enclosure is to be placed must define the fan type used in the cooling system. Check the product literature or discuss your environment with the air-conditioner manufacturer to ensure the air conditioner you choose will be adequate.

Allowable Enclosure Temperatures. Thermoelectric air conditioners often are used to simply cool electronics equipment below ambient. Most electronics are rated to an operating ambient limit of 110°F (43°C) or so. The maximum allowable enclosure temperature should therefore be based on the known operating limits of the equipment rather than around an arbitrary temperature. Cooling an enclosure to 95°F (35°C) is more than enough cooling to keep general electronics operating safely.

Do not overdo it when it comes to sizing. Cooling an electronics enclosure to 75°F (24°C) instead of 95°F (35°C), for example, will require a larger air conditioner to cycle on/off more often. Oversizing the active cooling is costlier and will lead to less efficiency. The purchase price will be higher as well as the cost of operation due to the loss of power efficiency. Also, it is worth mentioning that cooling significantly below ambient can cause excessive condensation to form inside the enclosure. This creates the potential for other problems with the enclosure’s contents.

Regarding the minimum allowable enclosure temperature, again, it is best to plan around the operating limits of the enclosure’s equipment. If heat will be needed in the winter months, an air conditioner with an added heat function can be considered. If a heating need is significant, it might make sense to add an auxiliary heater to the enclosure design. Keep in mind, however, that any active heat load from the enclosure equipment will contribute to the total load and will work to meet the enclosure’s heat requirement. This is a good reason to have a firm grasp of the active heat load during the sizing process. 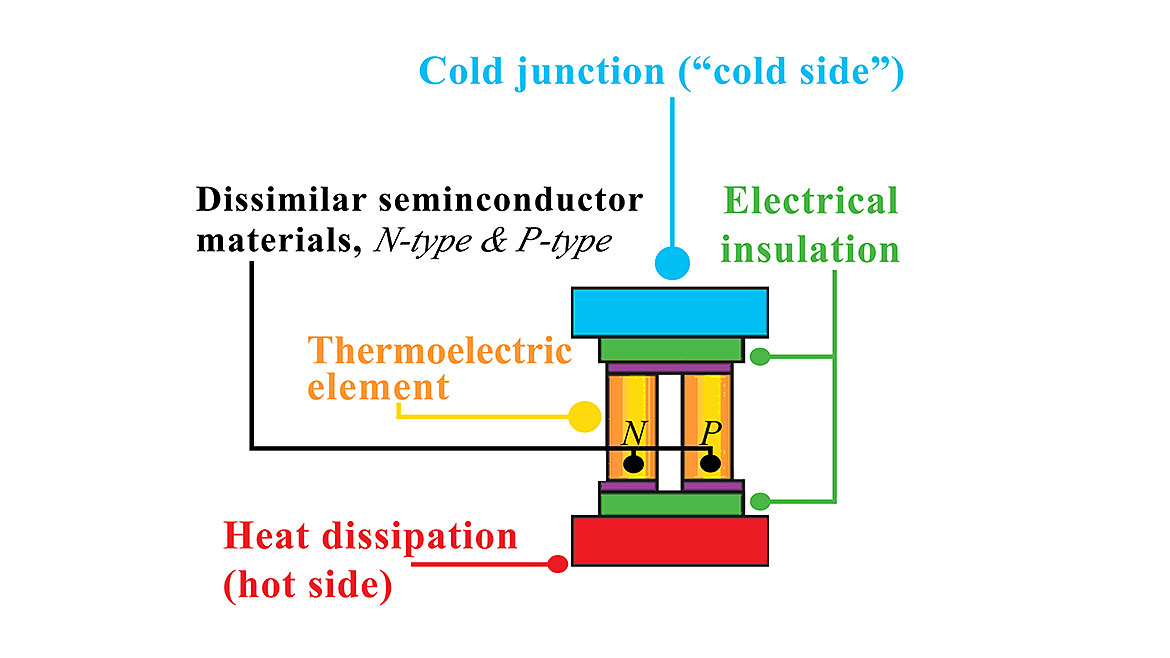 In a similar vein to avoiding overcooling, it is necessary to avoid undercooling. When choosing a thermoelectric air conditioner, a common mistake is to choose a small model to save enclosure real estate. Naturally lower in weight and more compact dimensionally, small coolers are desirable from an aesthetic point of view. Unseasonable warmth or a summer heatwave, however, could create too great a load. If the active cooling fails, so might the enclosure’s equipment. At best, the end-user will be facing equipment shutdown and, at worst, equipment will be damaged or destroyed from overheating. 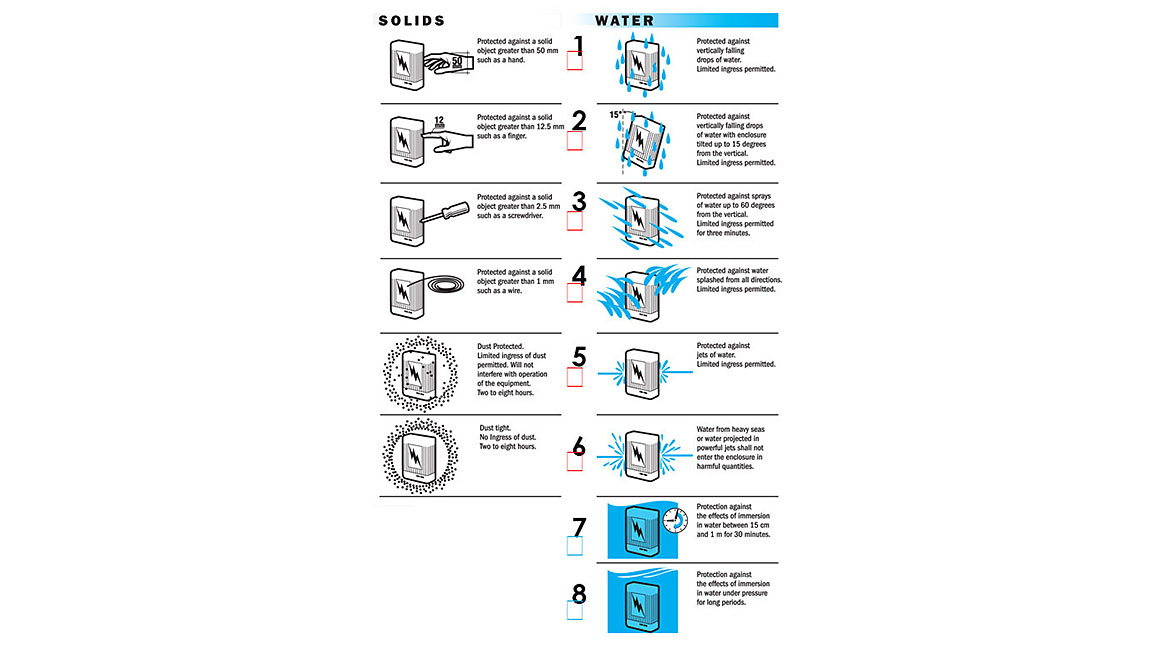 Many industrial-grade fans will offer some protection; however, the higher the IP rating of your enclosure, the more rugged a fan you will require in your enclosure cooler to maintain the enclosure’s environmental protections. images provided by ThermoElectric Cooling America Corp. (TECA) (Click on the image to enlarge.).


If multiple enclosures are planned within different geographical regions, consider the warmest environments first. Milder climates may have thermal management needs that are significantly less. Perhaps these locations can get by with a smaller enclosure cooler or with no cooler at all.

As climate patterns shift globally, consider the most recent history of a region and err on the side of caution. If a thermoelectric enclosure cooler is being sized to replace an existing active cooling system, the latter’s BTU/hr rating can inform the performance one can expect of a similarly rated thermoelectric cooler.

Cooling Requirements. Many free sizing tools are available online from thermoelectric air-conditioning manufacturers and enclosure manufacturers. When calculating how much cooling is needed, keep in mind that the total load is created by:

The amount of cooling required will be determined by these multiple variables.


What to Expect When Using a Thermoelectric Air-Conditioner

A thermoelectric air-conditioner provides benefits via its long service life and performance.

Service Life. Thermoelectric coolers are well suited to remote applications where low maintenance is desired. The reduced need for maintenance or replacement parts provide added value to the benefits of choosing thermoelectric technology. The thermoelectric element itself can have a mean time before failure (MTBF) rate of up to 300,000 hours. This is nearly twice that of an ordinary compressor in a vapor-cycle air conditioner.

Under normal use conditions, a thermoelectric air conditioner can be expected to run for at least seven years (much longer in some cases) before requiring its first repair. The first part that usually requires replacement is the fan. The fan is the only moving part of a thermoelectric cooling unit. Most can be replaced in the field.

Peltier devices are more expensive to manufacture compared to other cooling technologies. The trade-off is that thermoelectric coolers are incredibly reliable and require virtually no maintenance. 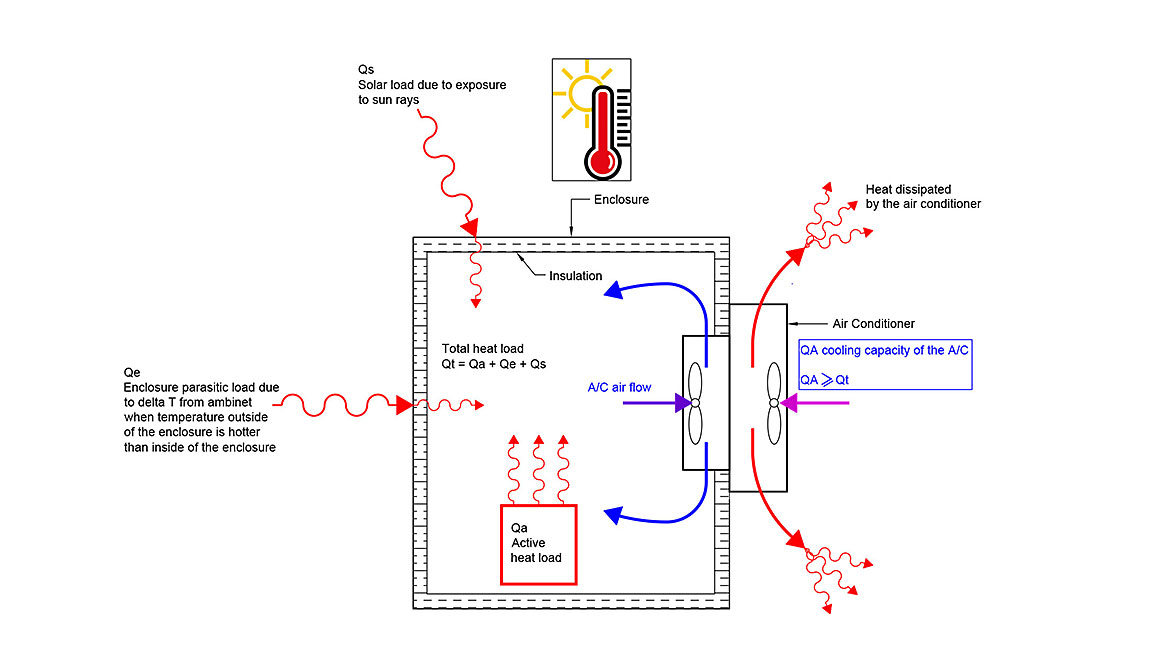 It is crucial to determine active cooling requirements in hot ambient temperatures. The formula for this calculation is: QA > Qt when Qt = Qa + Qe + Qs. Image provided by ThermoElectric Cooling America Corp. (TECA) (Click on the image to enlarge.). 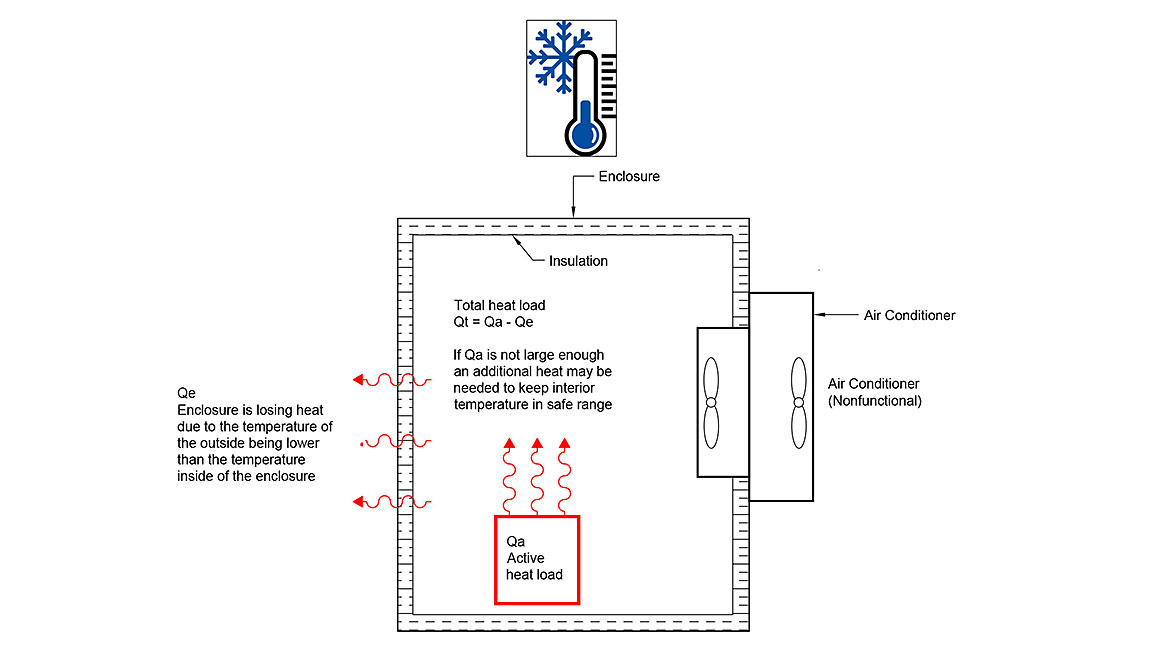 
Optimize Performance. Though low maintenance, a thermoelectric enclosure cooler can still benefit from some care. It is important to keep the airflow unobstructed. For best performance, keep the external heat sink fins and fan from debris buildup. This can be accomplished by spraying with compressed air or wiping with a slightly damp cloth.

In conclusion, companies have tapped thermoelectric cooling to increasingly support power and manufacturing industrial processes. These enclosures require more cooling, extended temperature ranges and improved accuracy, all of which are delivered in a low maintenance thermoelectric air conditioner. Increasingly efficient designs are allowing for air conditioners with up to 6,000 BTU/hr cooling performance. Industries with larger thermal management needs can now consider thermoelectric cooling technology for the thermal management of electronics enclosures.

Emily Hutensky is the president of ThermoElectric Cooling America Corp. (TECA) in Chicago. The company can be reached at 773-342-4900 or visit thermoelectric.com.