How to Reduce the Threat of CUI to Your Piping

A proactive approach to maintaining an ammonia system will help avoid factors that are catalysts for corrosion under insulation (CUI).

Corrosion under insulation — or pipe and vessel external corrosion — is the primary damage mechanism that affects the integrity of ammonia piping. Moisture enters the insulation and becomes trapped against the pipe, vessel wall or valve, and corrosion forms on the surface. Corrosion under insulation, or CUI, does not exist at every instance of trapped moisture, but over time, it will manifest and expand if not addressed. If left unattended, the corrosion will eat away at the exterior wall of the piping, thinning the metal to the point of failure.

When it comes to corrosion and predicting or locating the threat in your ammonia refrigeration system, the truth is that it is a slippery slope. Corrosion does possess elements of predictability, including its materialization in common areas and environments. However, biological growth on the jacketing or insulation, or excessive ice buildup — both of which are visual indications that corrosion may be present on your piping — do not always occur. Far too often, corrosion will thrive with no visual indications, fully concealed by the jacketing and insulation that propagate its existence.


Where CUI Decays the Pipe Surface

Due to the variables present, the progression time from moisture entering the insulation to the point of failure varies. Additionally, the rate at which external corrosion thins pipe walls in an ammonia refrigeration system is not calculable. The ambient temperature and the amount of moisture (along with its rate of expansion) are not controlled.

These variables also make it impossible to determine the distribution of corrosion around the circumference of the pipe. Oftentimes, moisture collects (or pools) and rests on a concentrated area of the pipe. Fully soaked insulation leads to corrosion that forms evenly around the pipe, especially on horizontal runs.

Moisture usually is introduced where insulation has deteriorated:

Therefore, all piping in an ammonia refrigeration system — long and short runs, vertical, nested and suspended — is subject to degradation. Preserving the vapor retarder where possible is critical. 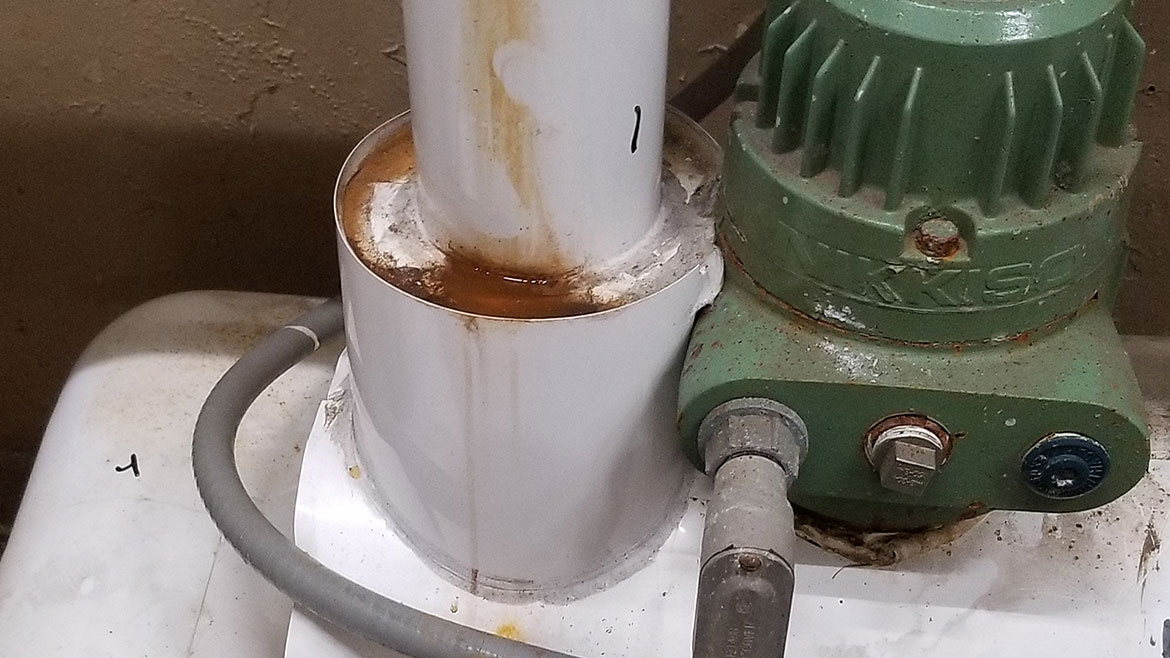 Pump-outs are typically a smaller diameter piping, making these locations susceptible to CUI. Water can be seen pooling at the base of the insulated ammonia piping at the pump-out. Image provided by Gamma Graphics Services and Lixi Inc.


What to Look for in Your System

An average of 30 percent of an aging ammonia refrigeration system has rogue moisture in the piping insulation, and zero systems reveal all trapped moisture visually. There are common characteristics that are often overlooked, however, that indicate the presence of corrosion or vulnerability to CUI.

While most facilities likely are employing practices to prevent and manage degradation, with regular inspections, it is possible to predict prime CUI breeding locations and recognize indicators that corrosion is present.

The visible cues that CUI has materialized on the piping typically occur in thermal cycling areas.

Typical examples include the DC tee in suction lines, hot-gas discharge lines, or any other lines that are or will be above freezing. Look for:

Biological Indicators. Algae, moss, plants or other biological growth on the insulation is another sign of CUI. Their presence indicates that the insulation has absorbed excessive moisture.

Rust Stains on the Floor. Rust stains on the engine-room floor are another giveaway that active corrosion factors are at work. Many times, such rust stains are found near valve groups, where the defrosting process produces excessive water exposure. 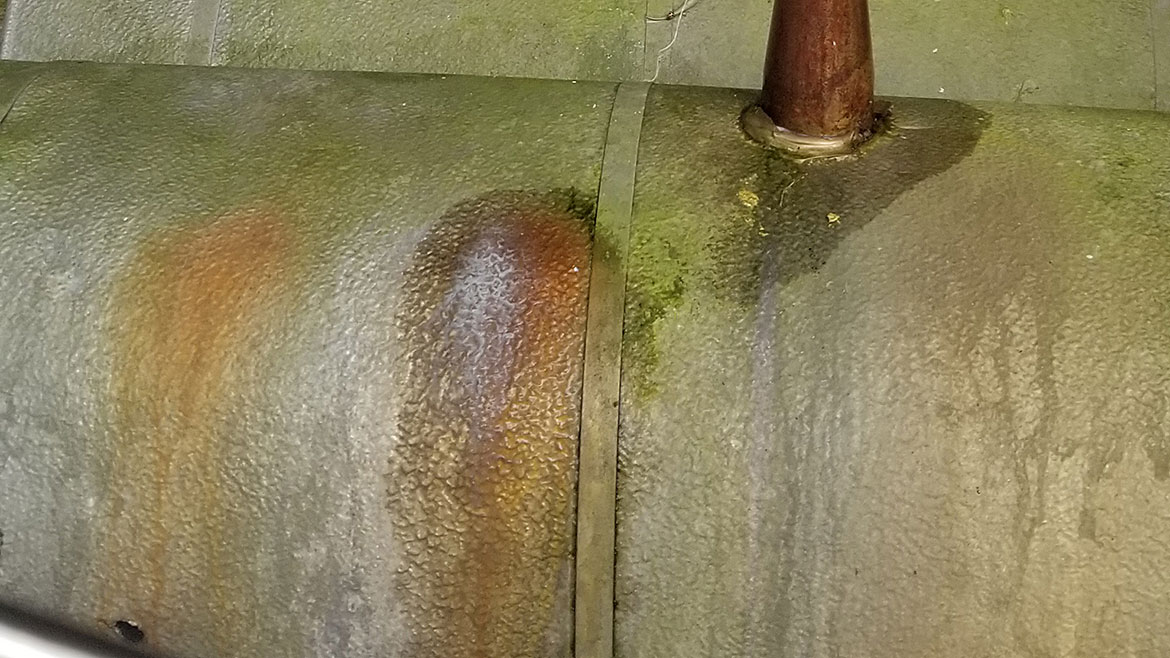 Rust stains and algae on an ammonia pipe jacketing are signs that there may be trouble. Image provided by Gamma Graphics Services and Lixi Inc.


Where Your System May Be Vulnerable to CUI

An industrial refrigeration system can be vulnerable to CUI via several means. These include damage that affects the vapor barrier, proximity to equipment or components that create a CUI-friendly ambient environment and problems introduced during installation or maintenance.

Vulnerability Due to Proximity. The relation to a component or structure can pose a problem for ensuring the integrity of the piping. Areas of concern include:

Piping near condensers or a cooling tower area is susceptible to CUI because this equipment can produce chemical- and mineral-rich mists that are especially damaging to pipe jacketing and bare piping. This mist can leave a mineral-type deposit on surfaces, and it is likely to cause corrosion on any metal surfaces it contacts unless the metal is cleaned and coated regularly. This is especially detrimental for piping that is not properly protected, like in areas where piping penetrates the walkways or when the design does not allow enough room to properly inspect or maintain coatings.

Around pump-outs and roof penetrations, the effects of gravitational pull create CUI hotspots. Pump-outs are commonly installed at the bottom of piping for proper function; however, this positions the piping precisely in the area that collects water. Gravity will pull water to the lowest area — beneath the piping or low areas of the roof. Additionally, pump-outs typically are a smaller diameter piping, making these locations further susceptible to CUI. 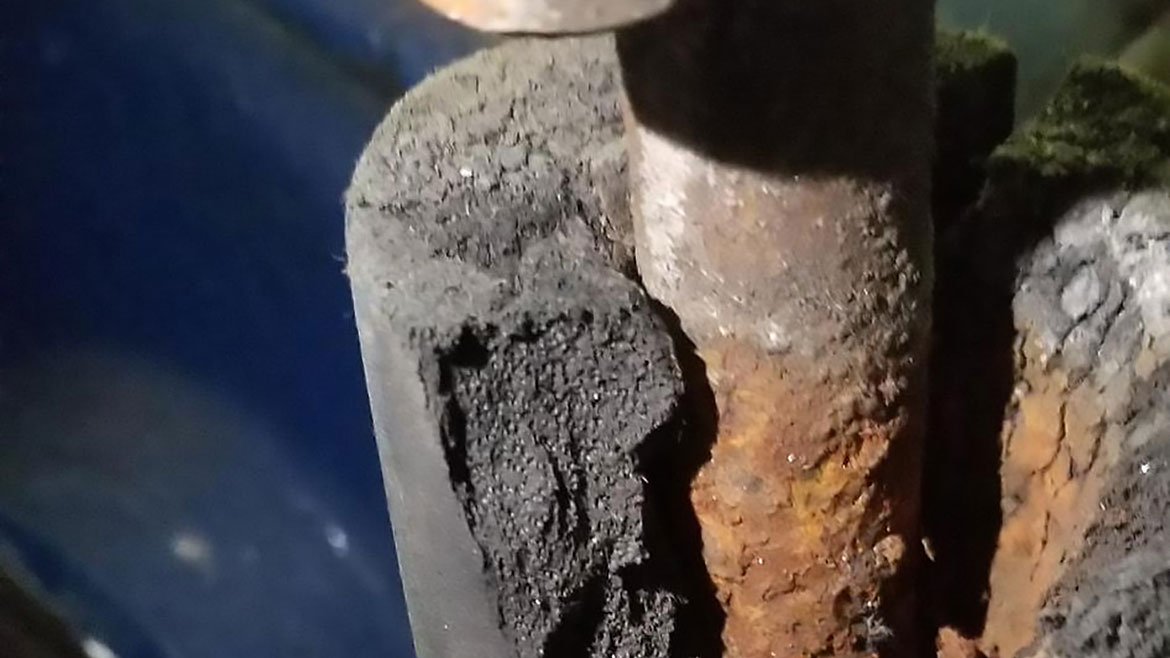 Any area where piping penetrates a boundary — a roof or wall, for instance — is difficult to inspect or maintain. Additionally, the piping oftentimes is uninsulated, leaving the bare piping directly exposed to potential moisture. In many systems, these areas are unprotected as they pass through the boundary. Mechanical integrity depends entirely on a secure adhesive or sealant such as caulk to provide weatherproofing. These sealing points should be inspected periodically to prevent corruption of the unprotected piping. In this case, a $20 caulk gun could save untold amounts of money and potentially save lives.

Also, congested roof drains that are not regularly cleared can trap moisture and promote the growth of trees and other organics.

Vulnerability Due to Design or Installation. Improper design, poor installation or maintenance, and use of the wrong materials can be equally devastating to piping and other components of ammonia systems. Look for:

In addition to the already mentioned design choices that introduce a vulnerability to CUI, seams and their placement are especially important. Seams placed on top of the piping are quite common, but they invite water into the system.

In addition, insulated-to-bare piping transitions at control valve groups often are a problem. This puts stress on the unprotected bare piping as well as the sealing. If not well maintained, the paint or coatings will flake, and visible rust and corrosion will soon follow.

Finally, improper pipe supports, or improper design in general, can create hotspots for corrosion and mechanical wear on piping. Thermal piping expansion/contraction in ammonia refrigeration can create wear points on piping if not properly protected from the support itself. The threat is magnified if the bracket design does not allow for proper maintenance and coating of piping. This is the same for brackets that are covered by jacketing. Again, while it looks nice, this is another area where jacketing will invite water into the system. Over time, the thermal cycling will cause enormous stress on the jacketing which does not expand but will separate at seams to accommodate. 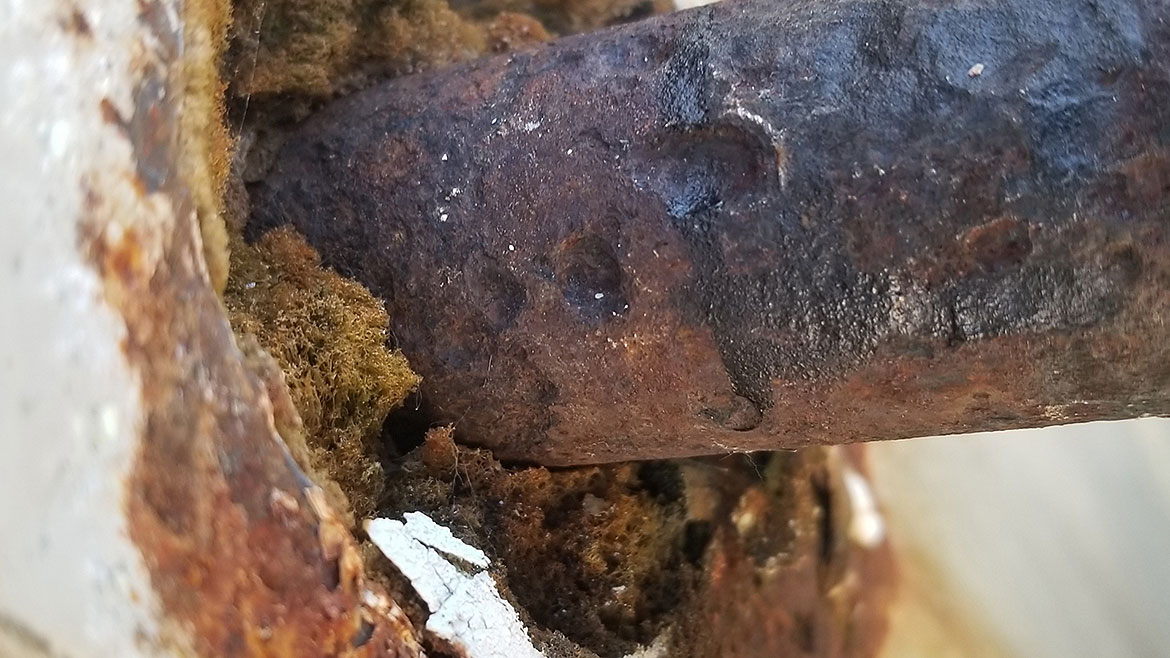 Corrosion under insulation (CUI), or pipe and vessel external corrosion, is the primary damage mechanism that affects the integrity of ammonia piping. Image provided by Gamma Graphics Services and Lixi Inc.

In conclusion, being proactive in your approach to maintaining your ammonia system and performing regular inspections will help avoid factors that are catalysts for CUI and a release. Where there are visible cues in your system that corrosion has formed on your piping, the piping should be tested to find the remaining thickness of the pipe wall. With this quantitative data, you will be able to decide to replace or repair the piping. If the wall loss is not significant, the piping should be cleaned of all corrosion and coated to protect the metal from further degradation.

Damaged and split jacketing, failed caulking and improperly oriented seams should be addressed promptly. Other vulnerable areas of your system due to proximity or design should be resolved if possible and inspected regularly to prevent degradation.

Shawn Triplet is the nondestructive testing manager and lead technician for Gamma Graphics Systems and LixiInc. The Colorado Springs, Colo.-based company can be reached at 847-844-8765 or visit inspectpipe.com.