Nonchemical water treatment methods can help reduce potable water consumption. At the same time, because chemicals are not added to the water, such approaches can improve the quality of the water released into the groundwater recovery systems.

One such technology involves controlled hydrodynamic cavitation (CHC) combined with dual filtration. In such an approach, cooling water is drawn from the cooling tower or evaporative condenser sump. Precision nozzles are used to impart water flow velocity, trajectory and rotation to create opposing water streams. At the core of these streams, a region of near-total vacuum is created, which degases the flow. Under these conditions, hydrodynamic cavitation occurs with intense, microscopically localized extremes of temperature (up to 9000°F [4982°C]), pressure (up to 1,000 atmospheres) and high energy micro-jets. 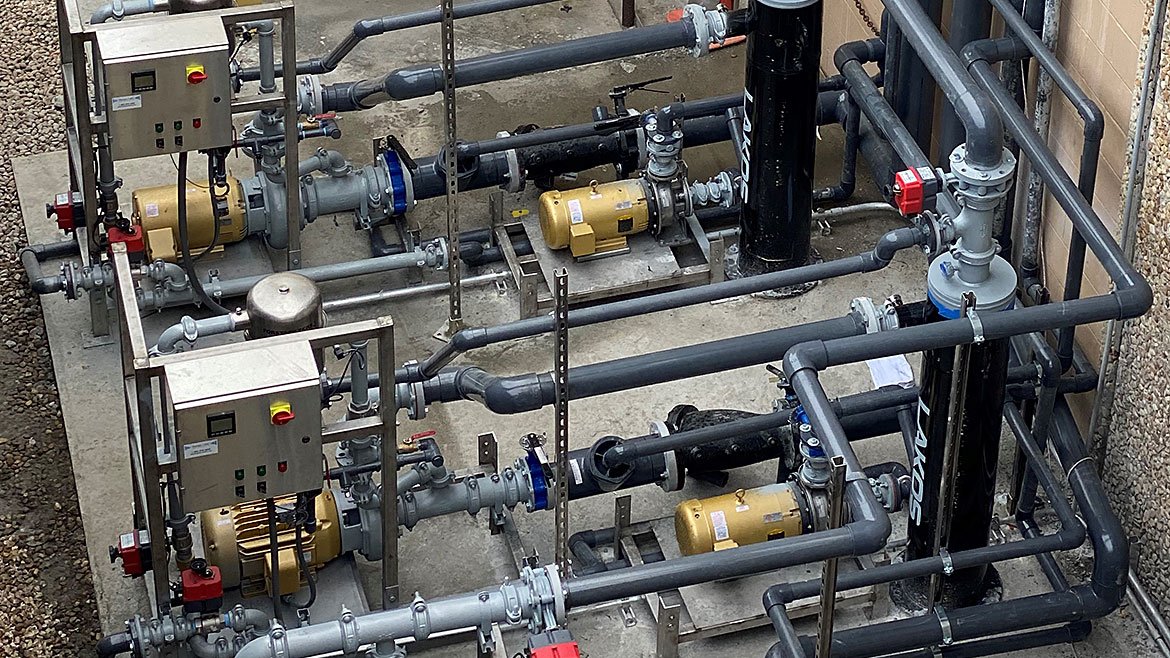 The CHC technology is based on the principles of kinetic energy, hydrodynamic cavitation and chemical equilibrium. In this multi-system installation, the generator unit and filtration system are installed in a side-stream location. Image provided by Vortex CHC

CHC-treated water is returned to the cooling system sump. Precipitated mineral colloids bond with other colloids and are removed via dual side-stream filtration. The filters capture both heavier-than-water particles with centrifugal separation and lighter-than-water ingested debris such as pollen, leaves, feathers and airborne particles using small-micron, automatically backwashing screen filters.

(Article continued below the sidebar.)

The detailed evaluation of a mechanical, chemical-free condenser water treatment system to control scale, corrosion and bacteria at the Tropicana facility in Bradenton, Fla., was one aspect of a comprehensive commitment by Tropicana and its personnel. To reduce plant discharges and conserve water, Tropicana built one of the largest (15,000 tons) refrigerated enclosures in North America. From the onset, a requirement of management and plant personnel was to seek the best available technology in all aspects of the construction and operation of the facility. In addition, Tropicana had concerns regarding water usage, environmental impact and worker safety. Tropicana also desired the lowest overall operating costs from this project.

Project Objective. The scope of the project included the installation and evaluation of three controlled hydrodynamic cavitation (250 gal/min) units and a high capacity automated filtration system on Tropicana’s new condensers. The project goal was to seek new technology that would be equal to or better than traditional methods of condenser water chemical treatment regarding scale control, corrosion control and microbiological control along with water conservation.

Project Description. Controlled hydrodynamic cavitation is used for treating industrial cooling waters — primarily condensers and cooling towers. The CHC technology is based on the principles of kinetic energy, hydrodynamic cavitation and chemical equilibrium. The system to be tested consists of a CHC generator unit and filtration, both of which are side-stream installations.

Since startup at Tropicana, the following results have been documented:

Tropicana is committed to seeking efficiency in its management and operational practices by continually seeking and evaluating the best available technology. By installing a CHC system and by evaluating the system, Tropicana was able to derive savings, improve worker safety, improve operating efficiency, reduce water waste, eliminate chemicals and the environmental effects from these chemicals, save water and create a source of non-potable water for process recycle use.


Controling Scale. Calcium solubility is inversely proportional to water temperature. In cooling water applications, the calcium tends to drop out of solution as the water temperature increases, and scale is formed. Chemical treatments attempt to keep these calcium ions in solution.

With controlled hydrodynamic cavitation, the kinetic energy released when the water streams collide forces the solid particles of calcium carbonate (CaCO3) from solution to form non-sticking CaCO3 colloids. These colloids attract dissolved calcium and carbonate ions. Then, they are filtered from the water stream. 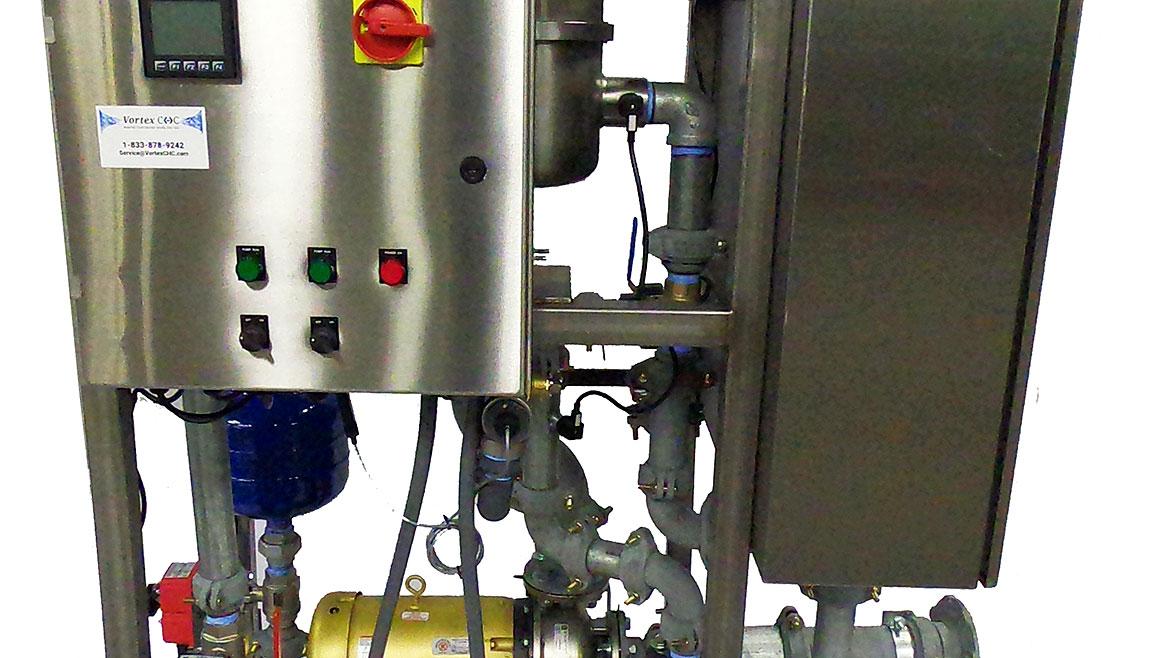 Controlling Corrosion. Within the controlled hydrodynamic cavitation water stream, a region of near-perfect vacuum (27.5 to 29.5" Hg) forms. This strips dissolved carbon dioxide (CO2) from the water and typically maintains the pH of water near or above 8.5. Controlling scale and bacteria also allows users to avoid using corrosive chemicals in the cooling system. The controlled hydrodynamic cavitation system also keeps the equipment surfaces clean by filtering out solid particles from the cooling water.

Due to the process intensification using controlled hydrodynamic cavitation, combining silica and chlorine gas (Cl2) is known as activated silica. This micellar form — a high efficiency coagulant and flocculent — will precipitate and pull other suspended solids such as CaCO3 crystals along with it. This is a synergistic combination that allows the bleed and blowdown stream to be post-treated to near-source water values and then blended into the cooling tower flow as source water, saving large volumes of water.

Gregg Montgomery is president of Vortex CHC. The San Antonio, Texas-based company can be reached at 210-844-0614 or visit vortexchc.com.