Metal corrosion is always a top concern for any chemical processing facility, whether it relates to the metal alloys that come in direct contact with caustic chemicals or the components that make up the rest of the processing system. All components must be relied upon to withstand the highly corrosive atmosphere that surrounds a chemical plant operation.

A key piece of many chemical manufacturing systems’ operations is the cooling towers, which are used as an efficient way to reduce the heat created during the chemical reaction process. The process water absorbs heat such as that from water-jacketed reaction vessels and transfers it to the cooling tower. The tower then exhausts the heat into the atmosphere and returns the cooled water in an open loop to the process.

In highly corrosive environments typical of many chemical plants, however, galvanized-metal cooling towers can fail due to corrosion. And, for one chemical manufacturer in North Carolina, after decades of replacing their metal towers with the same material, corrosion-resistant engineered-plastic cooling towers provided an alternative. 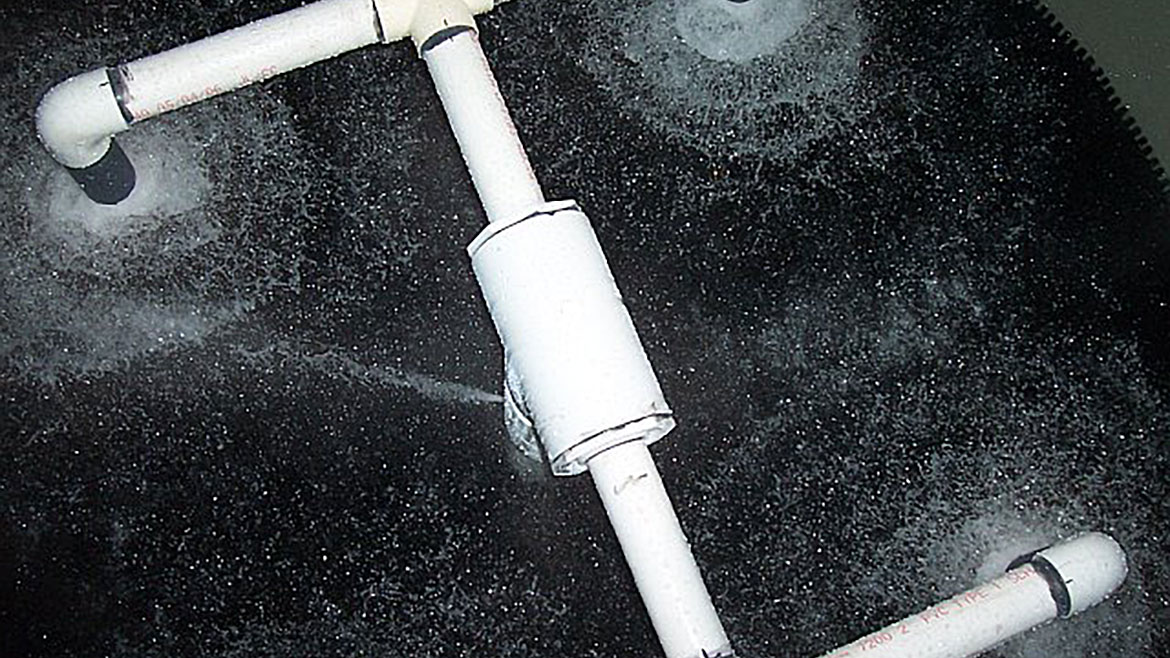 Engineered plastic towers are not affected by corrosive environments. Because they can be supplied already assembled, they may take less downtime for repair or replacement. Image provided by Delta


“We introduced them to engineered plastic towers back in 2010, which were installed at their main operating facility in the area,” says Chuck Parnell, sales engineer at Mechanical Equipment Co. (MECO), a Matthews, N.C.-based manufacturers’ representative that designs, installs and services mechanical and industrial equipment throughout North and South Carolina. “Prior to that, they had been using metal-clad towers, and they were unhappy about the extensive maintenance and downtime that was required for those units.”

Recently, the chemical manufacturer completed the construction of a new 20,000-ft2 facility for the research and development of new products for the petrochemical, industrial, agricultural and household markets.

“After more than a decade of using the engineered plastic towers, they were done experimenting,” says Parnell. “We installed the entire mechanical system — pumps, controls, everything — and they only really had one demand: HDPE cooling towers.”

High density polyethylene (HDPE) cooling towers were developed in the 1970s. The engineered plastic towers are not vulnerable to corrosive environments. Also, according to the equipment manufacturer, they require fewer water treatment chemicals. The packaged cooling systems also can require less downtime for repair or replacement. 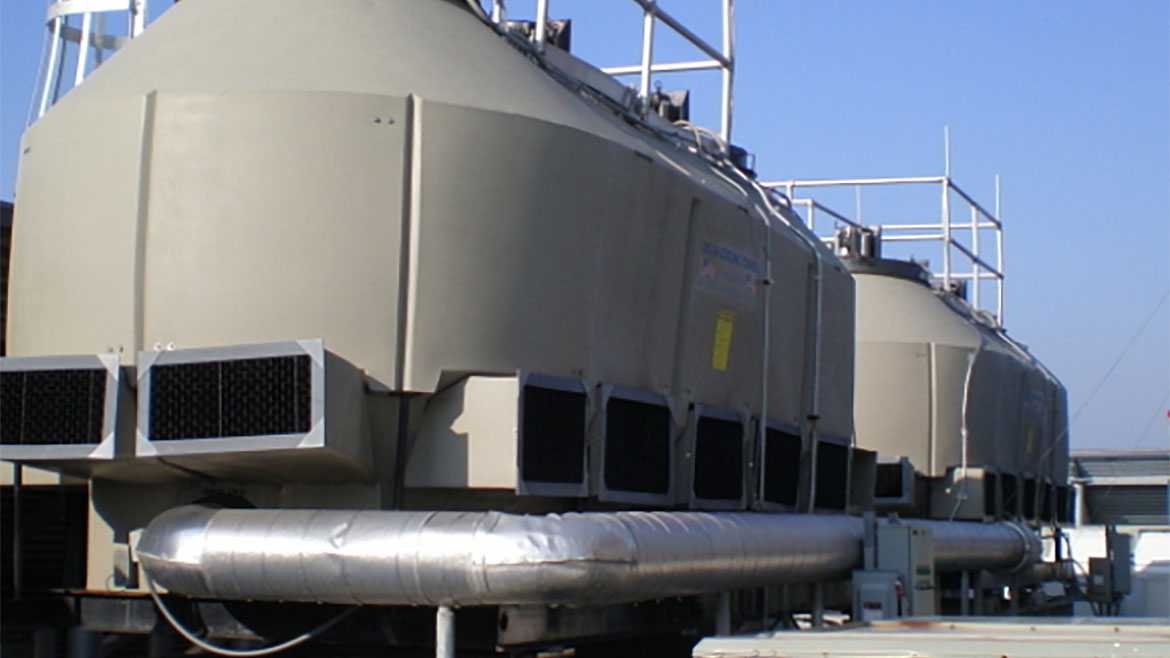 An induced-draft tower was selected for the chemical processor’s new facility. The total cooling capacity — 1,050 tons — was spread across three towers: one 250-ton unit and two 400-ton units. Image provided by Delta


Back when the chemical company was utilizing metal towers, trace chemicals from the manufacturing process were mixing with the water in the towers. This altered the cooling tower water pH and promoted oxidation reactions, similar to what occurs to metal near oceans.

“If you’re in a coastal region, with salt air, that’s a tough environment for a metal cooling tower,” adds Parnell. “Likewise, chemical plants have highly corrosive atmospheres, and that takes a toll.”

Before the North Carolina chemical processor switched to HDPE cooling towers, their old metal towers typically lasted only a few years before intensive maintenance requirements kicked in. When the metal units were in service for approximately five to eight years, the corrosive effects meant the metal towers required replacement. The company repeated this cycle several times over many years.

Longevity is a key feature of HDPE cooling towers. Many of the first HDPE cooling towers installed are still in operation — some as much as 40 years later. Manufacturers back up that longevity by offering long warranties on the engineered plastic shell. 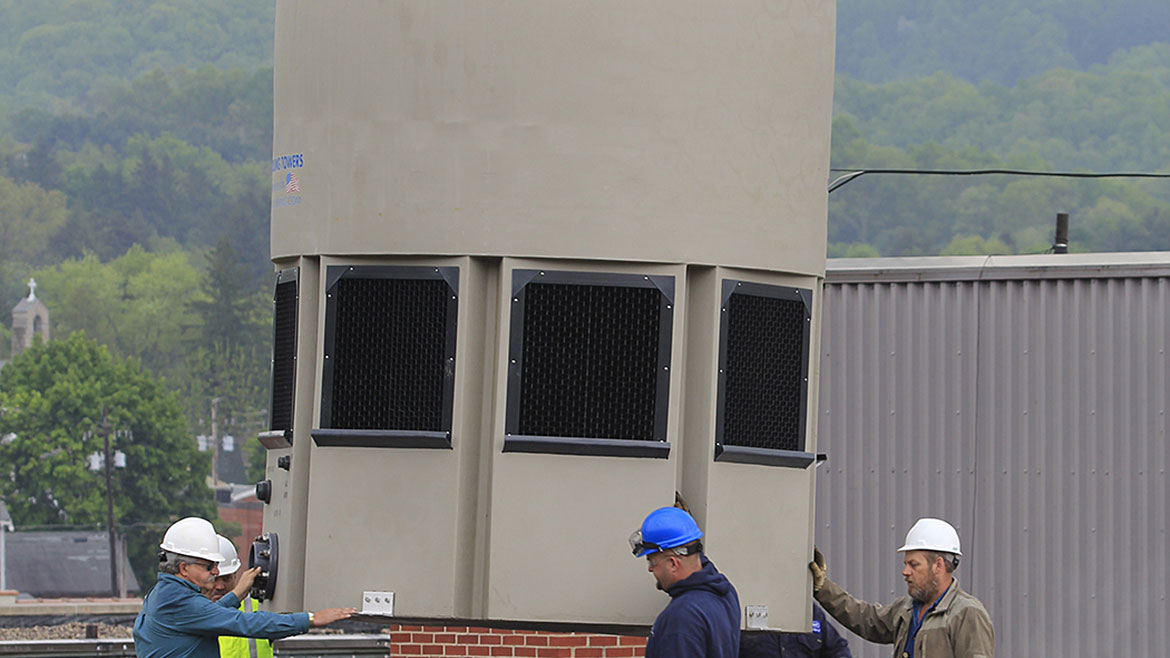 A chemical processor was introduced to engineered plastic towers, which were installed at their main operating facility. Image provided by Delta


Parnell says that the durability of the engineered-plastic cooling tower pays off by reducing the total cost of ownership. He points to several ways that HDPE cooling towers reduce ongoing costs. “They require less maintenance, water and electricity,” says Parnell.

While looking for a reliable solution is always a priority for anyone investing in a new cooling tower system, the energy savings offered by many HDPE models is an advantage as well.

“As a chemical manufacturer, they’re all about instrumentation and control,” Parnell said of his North Carolina client. “They operate 24 hours a day, but their cooling needs are dynamic. The ability to adapt cooling to run efficiently saves electricity without sacrificing cooling power.”

Parnell helped the North Carolina chemical processor set up an array of cooling towers that could be optimized for peak efficiency. He selected an induced-draft cooling tower model for the new facility and spread the total cooling capacity — 1,050 tons — across three towers. One 250-ton unit and two 400-ton units were installed.

Additionally, the cooling towers have variable-frequency drive (VFD) fans. This lets the chemical company choose to vary the fan speed and avoid running them at maximum speed except when necessary. Tailoring fan usage to cooling demand brings further efficiency and savings.

“For the same cooling tons, an HDPE tower can be smaller than a comparable metal tower,” adds Parnell. “The [cooling tower manufacturer’s] engineers have come up with a design that minimizes fan horsepower without sacrificing cooling capacity.” 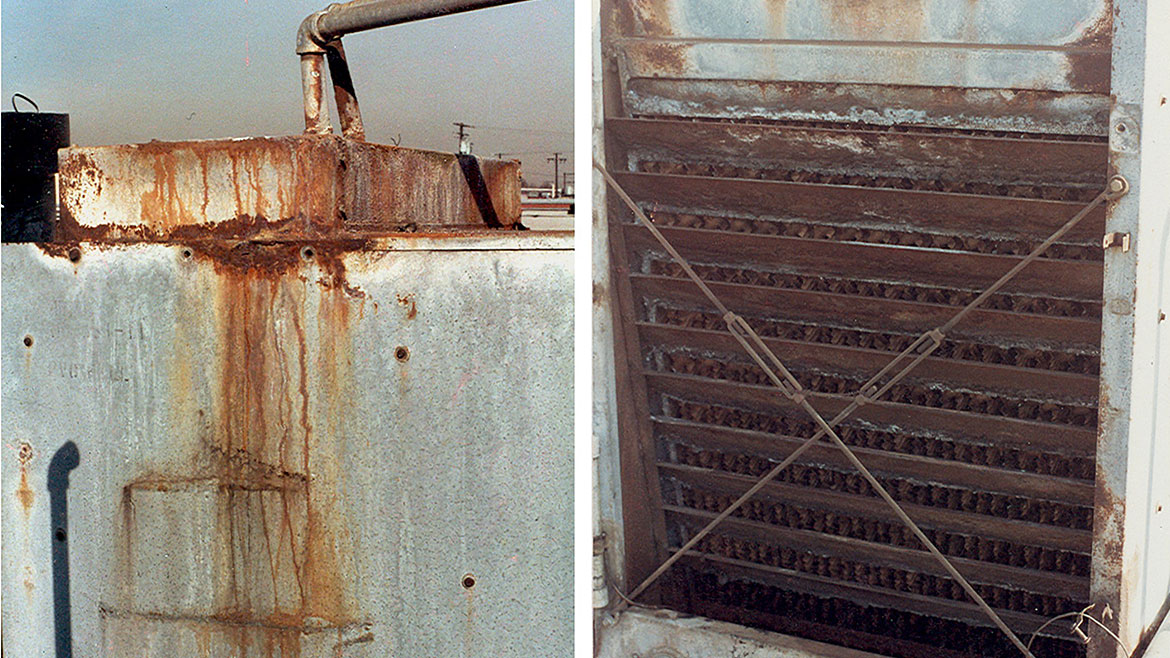 When the chemical company was utilizing metal towers, trace chemicals from the manufacturing process were mixing with the water in the towers, altering the pH and promoting oxidation reactions. Image provided by Delta


These efficiencies in the design of the HDPE cooling towers have been estimated to reduce energy consumption by as much as 40 percent, which equates to substantial savings for heavy industrial operations. Moreover, because the HDPE cooling towers do not leak or require fine-tuned chemical water treatment, Parnell says, users can save on both water usage and treatment chemicals.

“Based on experience, they determined that the high density polyethylene provides them with a more reliable tower,” concludes Parnell.

In chemical manufacturing, where efficient output is essential for profitability, HDPE cooling towers are proving to be a formula for success.