When a facility is acquired, it is not unusual for the company to take a measure of existing equipment, methods and technologies. At times, the evaluation leads to plant renovations that suit the future use of the facility. Such was the case when cold storage warehouse provider Lineage Logistics added more than 30 cold storage facilities that “rode along” with its acquisition of Preferred Freezer Services (PFS) in 2019.

At a former PFS facility in Perth Amboy, N.J., Lineage Logistics recently renovated the refrigeration system, including the replacement of an evaporative condenser, to add options such as passivation and water treatment. The new cooling system condensers were installed on the ground rather than in the air as is so typical of this equipment (see sidebar).

Replacing the condenser also permitted future-proofing of operations at the facility, says Brad Stonesifer, an Evapco sales representative with Hanover, Pa.-based MidAtlantic Refrigeration. “We designed and specified our condenser coil bundle for conversion suitability to R449a [an HFO refrigerant blend], allowing a change-out from R22 in the near future,” he explained.

Though a replacement condenser was a top priority, the conversion to R449a also was an important need. This required special attention by Stonesifer and engineers at the manufacturer. The condenser required slight oversizing from 5,160 to 5,670 MBH to accommodate the refrigerant exchange (R449a requiring the larger size). System components would need to be suitable for the conversion, requiring two inlets and four outlets per coil. These design changes were accommodated by the manufacturer.

Lineage managers and the company’s installing/service contractor — Jesse Landis, owner of Souderton, Pa.-based J.I. Landis Welding & Mechanical — chose Evapco as the condenser supplier because their evaporative condensers incorporate protective, factory-assisted passivation of all galvanized steel, and factory-mounted water treatment. “Evapco not only provided factory pretreatment of the coil bundle to reduce its chemical reactivity but ongoing monitoring of the field passivation as an assurance of all the galvanized metal’s long-term stability,” explained Stonesifer.

The factory passivation is a two-step process that begins before a unit ships and continues for the first four-to-eight weeks of its operation in the field, Stonesifer noted. Once passivation is complete, the temporary passivation panel is removed from service, and a solid-chemistry water-treatment system — to control scale, corrosion and microbial growth — remains installed. 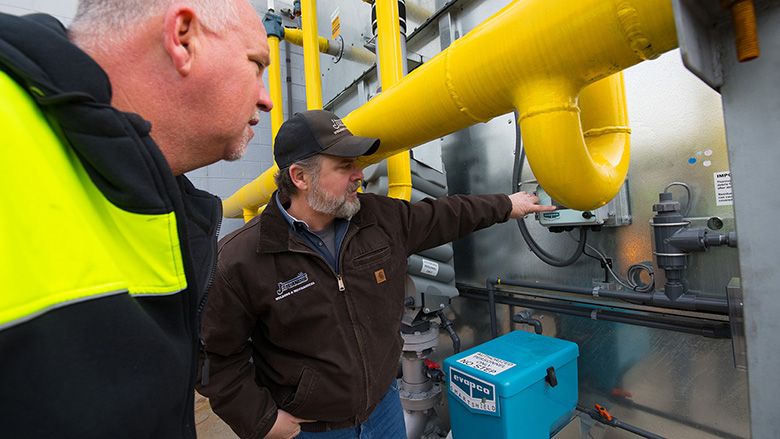 With evaporative condensers, galvanized steel often is chosen to withstand the rigors of environmental deterioration as well as for improved heat transfer.

“For evaporative cooling equipment, shiny metal surfaces are not good,” Stonesifer said. “It may look nice for a while, but passivated steel coil bundles and other galvanized steel surfaces are much preferred because of the resistance to corrosion. And, in the field, maintaining that passivation is just as important.”

‘Legacy’ Installations on the Ground

The Perth Amboy cold storage building was one of more than 30 Preferred Freezer Services (PFS) cold storage facilities acquired by Lineage Logistics in 2019. All were designed by John Galiher, then president and owner of PFS. Jesse Landis of J. I. Landis Welding & Mechanical — whose firm worked regularly with PFS — said that ground-level installations were common with PFS.

“We worked for PFS and also with Lineage, among others. This type of work is our specialty,” he said. So Landis had ample points of comparison to note how the legacy systems at the Perth Amboy were different. “There are very few cold storage facilities with large condensers installed at ground level,” he said.

The team at Lineage refers to these ground-level installations — those that were part of the PFS acquisition — as “legacy installs.” Landis explained that though elevated cooling equipment, often mounted above the facilities they serve, saves real estate on the ground and may provide a safety factor to the equipment, there are many advantages to ground-level installations. These include reduced initial construction costs as well as reductions in the cost of installation and service work.

Simpler ground-level installations also cost less to engineer. “We have no issues with purge points, and it’s so much easier for service work such as checking the coils for calcification, coil cleaning, replacing media or water eliminators,” added Landis.

“Rigging work can become quite involved and expensive with elevated equipment,” he said. “Yet, there seems to be broad preference for this nationally. Some facility managers and engineers prefer having purge points at the [cooling] system’s highest level — where the refrigerant gas turns into liquid form. Yet, we’ve never had any issues with that for condenser equipment that’s installed at ground level, with no risk to tender, easily damaged rubber roofs below, among other things. We’ve come to appreciate those ‘legacy’ installs.”


Galvanized passivation is complete when there is minimal white-rust formation, and a dull gray color is achieved. “With galvanized steel, there’s always the risk of corrosion unique to it known as white rust,” said Stonesifer. Though more familiar red-brown rust is more quickly damaging to steel, white rust can lead to premature deterioration (figure 1).

Stonesifer explained that part of the reason for the condenser’s longevity is water treatment: “That was one of the early considerations for the facility and the condenser that serves it,” he added. The company performs makeup water testing to determine the water quality and uses that information to help engineer a site-specific solution. 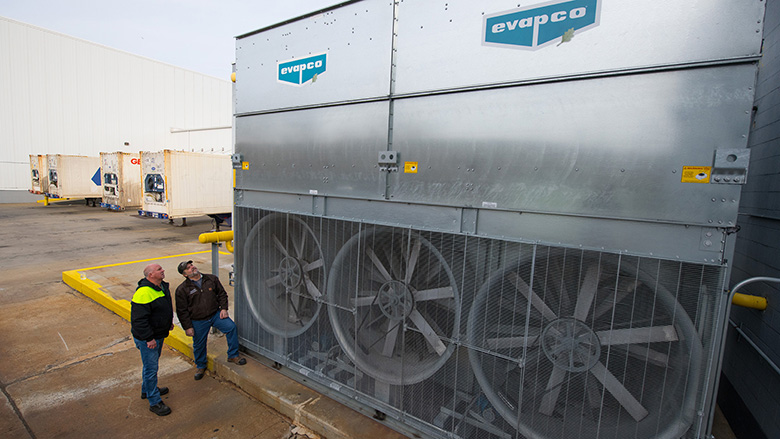 “We take the threat of white rust seriously,” said Bob Walsh, manager of plant operations for 15 Lineage facilities, including 10 in New Jersey. “Challenges that can threaten facility operations are top priority,” he added. “At Perth Amboy, we store mostly seafood — lobster, shrimp, scallops and crab. At this moment, there’s 7 to 8 million pounds of crab in the freezers and 1 million pounds of crab in the cooler.”

Though the Perth Amboy building is large by most standards at 120,000 ft2, it is “a bit small” among facilities in the Lineage portfolio. Walsh explained that an average Lineage cold storage facility might be in the 225,000 to 300,000 ft2 range. A large one currently under construction in Olathe, Kan., is 500,000 ft2 and utilizes the Evapco water treatment technologies.

According to Walsh, the condenser is the cooling system’s “crown jewel,” ensuring steady temperatures within a facility that includes large refrigerators at 34°F (1.1°C), freezers at -5°F (-20.5°C) and a loading dock cooled to 38°F (3°C). Temperatures in the refrigerated cooler are most critical, he noted. “For the freezers, we could lower the set temp 18 to 20 hours before the retrofit because we knew that during the retrofit the temperatures [without mechanical cooling] would rise. But with the refrigerators — where we’re unable to lower the temperatures further — it’s especially critical to protect the cooled product.”

Landis, whose company does a lot of work for Lineage, was chosen to rig, commission and service the new cooling equipment. The team at J.I. Landis Welding & Mechanical began its preparations, including preassembled components and piping, many weeks before installing the new condenser. The actual retrofit began at 2 a.m., and by 7 a.m., the team fully evacuated and captured 11,000 pounds of R22 refrigerant and isolated the old condenser. The refrigerant would be reintroduced to the new condenser within several hours.

“Of course, the plan is to switch to R449a [refrigerant] soon, as we’ve done at 10 Lineage facilities previously,” said Walsh. “We’ve found that though the new refrigerant blend works very well, it tends to hang up in the condenser. That’s why we asked for the custom construction of two inlets and four outlets per coil.”

By 10 p.m., the new condenser was online, ensuring freezer and refrigerated temperatures throughout the facility. Walsh said that during the 18-hour retrofit, there was no discernible rise in temperature for the frozen or cooled product. 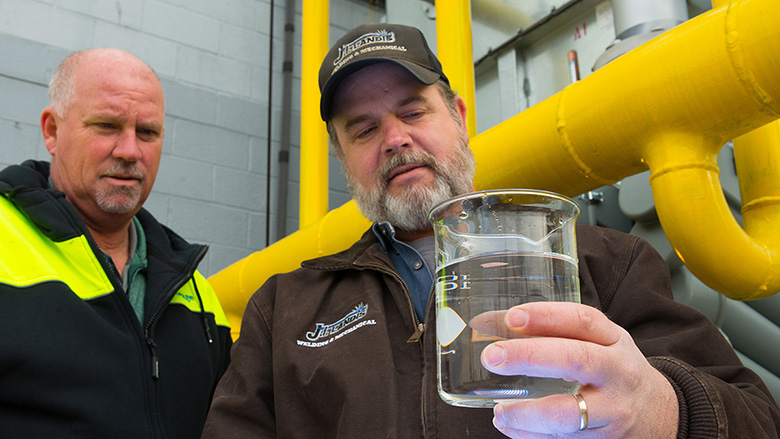 During the planning stages, Stonesifer and Landis worked with the factory-authorized water treatment partner to schedule field passivation of the condenser. Damion Riera, the regional manager for water engineering services in Staten Island, N.Y., arrived on-site shortly after the condenser was delivered. “We were very pleased with the level of expertise he brought to the job,” said Walsh.

Startup and commissioning is the most critical time in a unitʼs service life, noted Cohick. “Our eco-PMC condensers with finned coils — combined with factory passivation of the hot-dipped galvanized steel coils — provided advantages that Lineage wanted. The factory pretreatment on the coils became an important advantage for the Perth Amboy retrofit because the new equipment would be placed immediately under heat load. Natural, on-site passivation works only when there’s substantial time to allow the metal to passivate gradually while not in use. It often takes a few months to properly chemically passivate on-site, with careful monitoring of water pH and chemistry,” he said.

According to Brett Alexander, a senior marketing and application engineer at Evapco, after the Lineage facility’s submittal was approved, the Taneytown plant began construction of the condenser. During this time, the coils were built and finned for enhanced thermal performance, then hot-dipped galvanized. “Immediately after that, we bring the newly galvanized coils back to the plant to begin step one of our proprietary passivation pretreatment, known as Passiv-Assist,” he explained.

“We’re the only manufacturer in the industry that has the capability to facilitate factory passivation,” said Alexander. “Now, we’re not just telling customers they need to passivate their galvanized steel — we’re showing them how to do it under tightly controlled conditions.”

“This … enhances the speed and effectiveness of properly executed field passivation, allowing their evaporative equipment to be passivated in the field under immediate heat load,” added Stonesifer.

Meanwhile, while other condenser components are built and assembled, a factory-mounted Smart Shield was installed on the spray pump side of the unit. The technology is integrated into the condenser’s construction at the factory and helps manage solid-chemistry water treatment. Smart Shield includes all the components required for effective, long-term water treatment to control scale, corrosion and microbiological growth, explained Alexander.

Based in Taneytown, Md., Evapco manufactures heat transfer solutions for industrial and commercial applications. For more information from Evapco, call 410-756-2600 or visit evapco.com.

Lineage Logistics Holdings LLC, Novi, Mich., provides refrigerated warehousing and storage as well as temperature-controlled logistics to those in the process industries as well as other industries. For more information from Lineage Logistics, call 800-678-7271 or visit lineagelogistics.com.